It’s the season for spooky tales and what better way to close out October than with a visual novel with some heavy supernatural leanings? Hermitage: Strange Case Files is a detective story that puts a heavy emphasis on the bizarre goings on. I feel the genre needs no excuses to get weird but can the investigating prove compelling enough for me to stick it out? 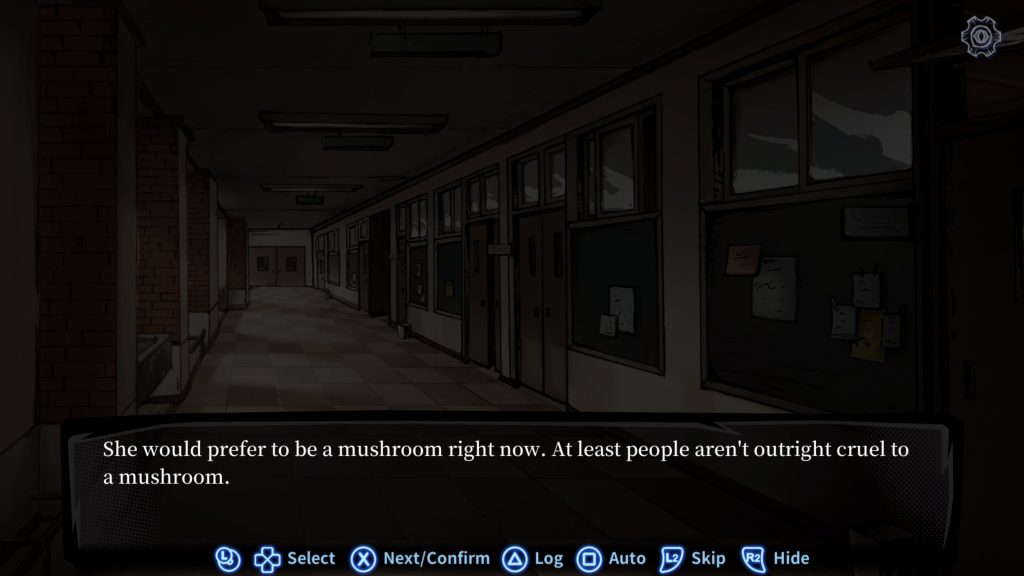 Initially, it would appear so. The story winds through a handful of lengthy cases that don’t tend to deviate too much. There’s a focus which is admirable and, to begin with, the narrative is played very straight and serious. You play as a nameless owner of Hermitage. It’s a book store in town with a small but regular clientele. According to the bookshelf, the place specialises in otherworldly and occult texts which all come in handy when deciphering the game’s mysteries.

Each chapter follows the same format. It begins with a crime and it’s our chain-smoking hero’s job to solve it. From there, you interview people of interest, visit crime scenes, locations and use books to string the whole case together. It involves a lot of reading but crucial text is highlighted in red and your case file folder helpfully reiterates vital information.

When interviewing people, you do occasionally get chances to examine them for further clues, although I find these are there to just add extra flavour, rather than deliver additional information. From my experience, gathering the right snippets is a straight forward process and you rarely have opportunities to miss out. 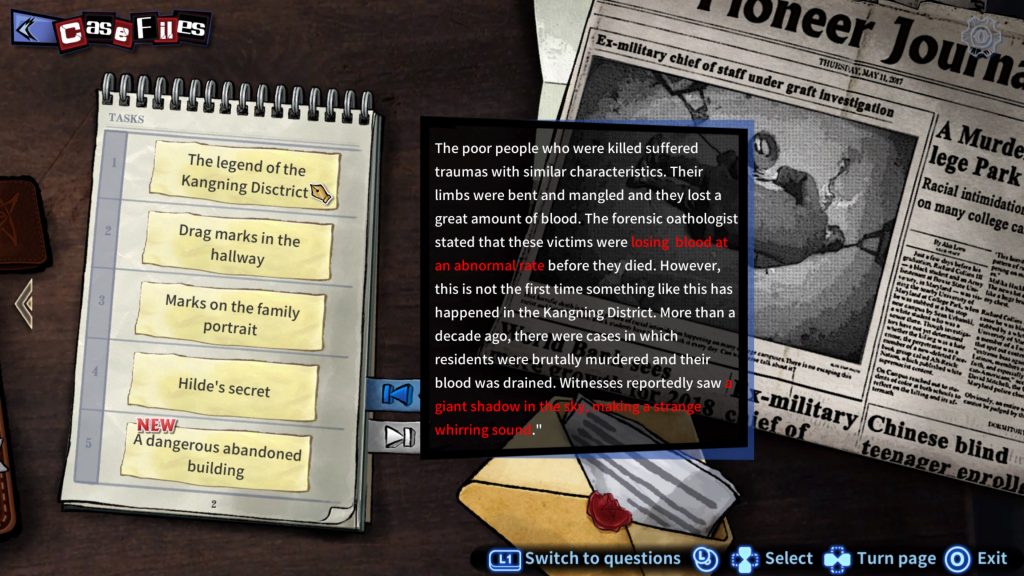 What you do with these clues is then deduce answers to questions that the game poses. It could be to discover a motive, relationships between locations, events, people and so forth. You need three correct clues to continue and failing does allow the game the opportunity to prod you in the right direction. Unfortunately, with the game being so heavily enthused about the spooky goings on, I found the logic to be wanting in some spots. Maybe I was just being thick but the earlier examples feel a lot easier to tie together.

Failing these sections effectively ends the chapter with a bad ending. Visual novels with failure states is nothing new but it feels rare in the genre. Having one here took me by surprise. What’s worse is that some of the latter chapters can carry on long after you’ve already lost. From my experience, the game does checkpoint at the right spot. Anyone playing for the first time might struggle to figure a way past certain deadlocks. Personally, I had skipped one clue that ultimately sealed my fate for an entire chapter. With the game being so reliable about handing you the right info, I never thought you could miss something so vital. 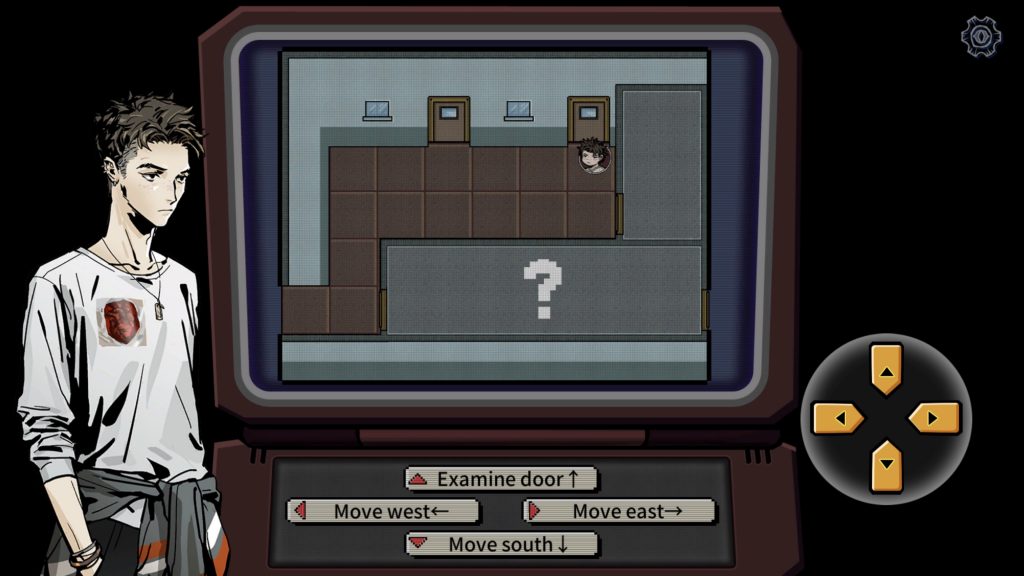 Away from the gameplay, the story is fairly well told. Barring a couple of daft interludes, the tone is fairly serious and the stakes are pretty high. The cast get on well which fits as most of them are regular visitors to the store. The stranger elements don’t feel out of place although it does mean the more human motivations are lost in the shuffle when a ghoul turns up. The story’s mostly told through face-to-face conversations but there are moments where telephone and instant messaging slips in. None of these jar with one another which builds a decent cohesion from start to finish.

Where it does struggle is in pacing. Each chapter is maybe an hour or two long but I found the finale was a crawl to get to. It’s a wordy script and I probably did myself a disservice mainlining the game in a couple of sittings. It probably took me 6-8 hours which is substantial for a visual novel. Replay value is minimal with only a few trophies tied to failed chapter endings and the decisions you make rarely take things in wild directions. 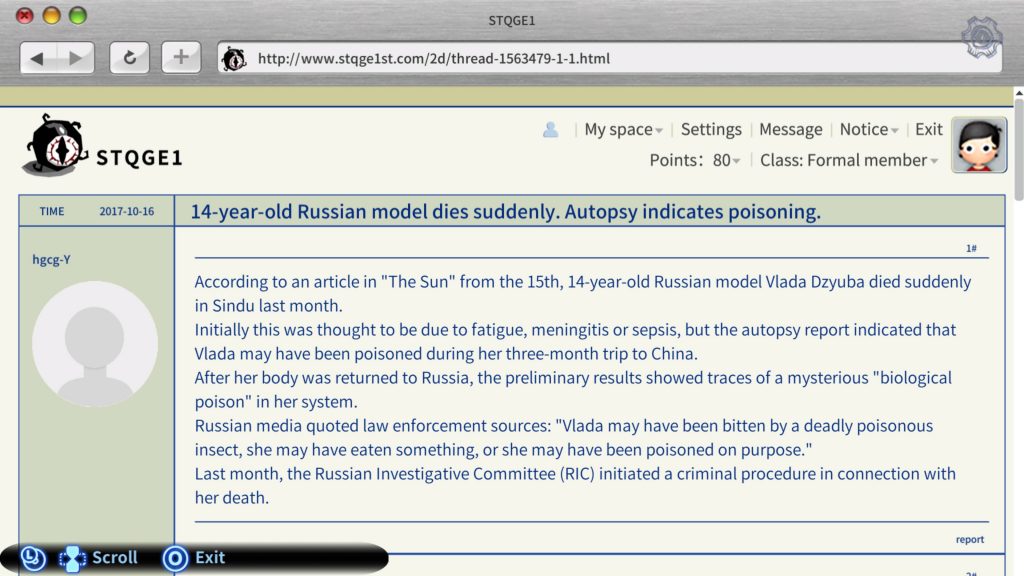 Hermitage: Strange Case Files does carry a good presentation. The portraits are detailed and, whilst they aren’t especially animated, they do create a good back-and-forth when conversations are in full flow. The backgrounds held my attention and you do venture all around the town in search of clues. There are times when the game ventures into faux-3D territory which looks really nice. I also appreciate the monster of the week feel each chapter encapsulates. It’s well done, although I do miss having more stuff to do as a player.

Overall, Hermitage: Strange Case Files delivers a decent investigative experience. Each chapter has a monster of the week feel that’s played largely straight. There’s a couple of goofy interludes that don’t sit right with me but the presentation works well to hold it together. I don’t like how clues can be missed and failure can be sealed in a chapter without your knowledge. It’s not often but feels like an undue punishment. The pacing sags in the final section, too.

Hermitage: Strange Case Files
6 Overall
Pros
+ Decently written with a mostly serious tone.
+ Detailed backgrounds and portraits with some occasional flourishes.
+ Important clues are highlighted and rarely, rarely missable.
+ Does try to vary the gameplay with investigative interludes.
Cons
- Pacing suffers greatly in the last act.
- Some of the logic for your deductions can feel a little off-kilter.
- Needs to communicate the failure states better.
- Some of the longer stretches leave you with not much to do.
Summary
Pacing issues aside, Hermitage: Strange Case Files gets a few things right. The writing keeps things largely focused and the chapters feel tight enough to enjoy on their own. I did feel the logic for the some of the investigations felt slightly misplaced and the potential to miss clues sets you on course for failure. It's all presented very well but I did feel a lack of something to do when the script became especially verbose.