I’ve been aware of Corpse Party for many years now. It’s a pretty famous series in Japanese horror visual novels but I’ve never played it. I’m not a fan of visual novels in general but I have played games like Danganronpa and Virtue’s Last Reward in my own time. Is Corpse Party like those games in style and quality? Let’s find out.

It’s titled Corpse Party (2021) as this is an upgraded port of a 3DS version of the original game, which was created in RPG Maker. Not that you should expect PS4 quality visuals, but I’ll get to that later. 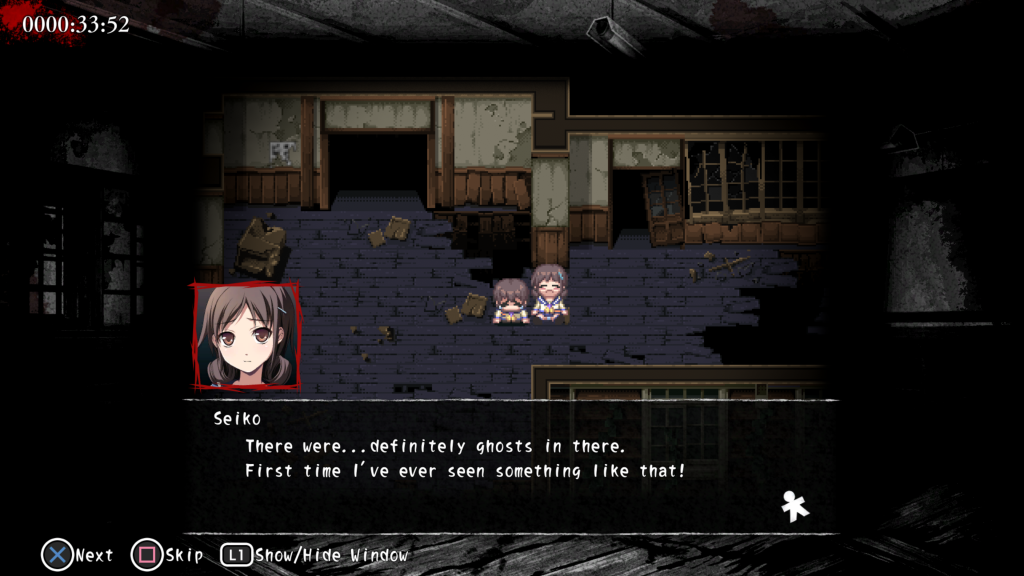 Corpse Party follows a group of school friends and their teacher. One of the students is moving away and so one of the more occult minded friends suggests a ritual so that they remain friends forever. Naturally the ritual doesn’t go as planned and they are transported from their school into a abandoned school where a terrible incident occurred many years prior. The dead bodies lying around quickly show that things aren’t right and they must find a way to escape with their lives.

This isn’t a straight visual novel, there is some gameplay in here. You control a little character from an overheard perspective as you explore the school. You need to interact with certain elements of the environment, find items to use in places and initiate cutscenes as you reach the correct trigger points. There is a lot of characters talking, don’t get me wrong, but the exploration does add something to the game. There are no real RPG elements however, despite health being listed on screen. 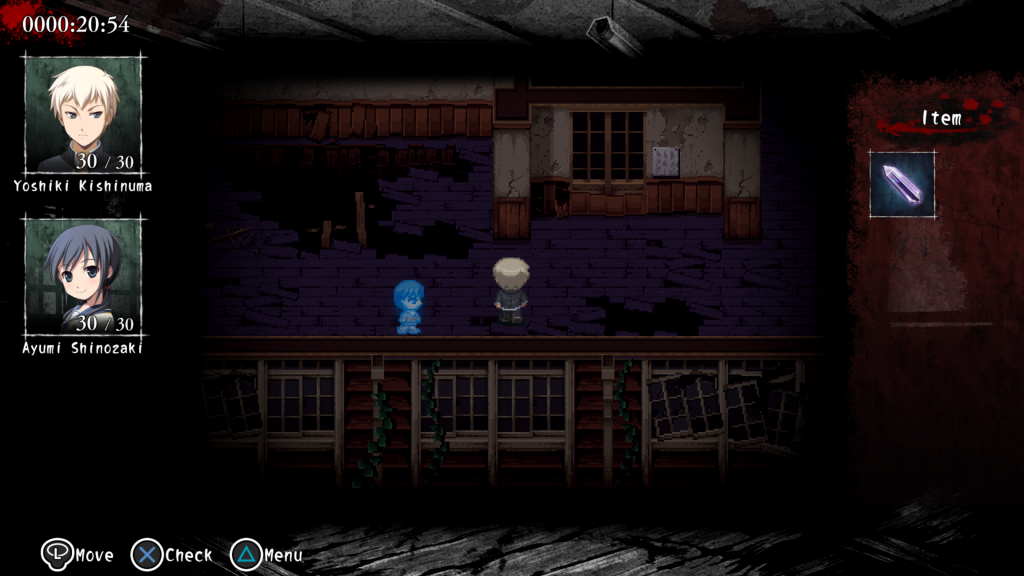 The design is a little strict in that you need to interact with the correct things in the correct order and sometimes multiple times to progress. You can be wandering around not sure what to do because you didn’t check the cupboard in the first room you started in twice. Worse still you can check an object and die as a result of it. There are also decisions to make throughout. There are plenty of ‘Wrong Ends’ to be found and you’re encouraged to do so as although they won’t continue the story there will be reams of text describing the character’s grisly death.

to zip through the dialogue at a tremendous pace and you can also save at any time. There are hard saves which you must do at candles that are dotted around but you can also do one temporary save from a menu which will save you a lot of time if you’re expecting the worst to happen.

Generally you will just be wandering around the school but the game does a good job of creating atmosphere, considering the very weak graphics and limited locations. Even if they were on a SNES they wouldn’t be up to scratch, so on a 4K television things look very basic, blocky and at times blurry. There is the odd CG scene which are far better and crisp as you like but they are few and far between. Very little has been done to the original presentation of the gameplay for the PS4, though character portraits look sharp. 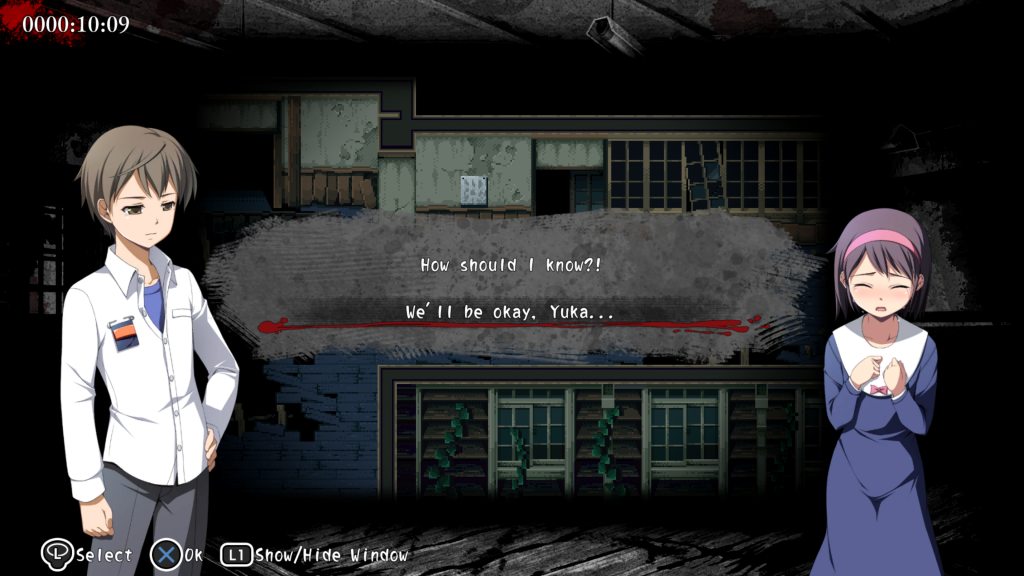 It’s in the sound where things hold up. The music and voice acting (Japanese only) are actually very good and the music isn’t restricted simply to scary, atmospheric tunes. There are some upbeat tracks as well but the game doesn’t ever really drop its foreboding atmosphere. Then there are the sound effects…

See, wrong ends or not people are going to die. The game sometimes uses the little sprites of the characters to act things out, rarely it’ll cut to a CG picture, sometimes it’ll simply cut to black and use descriptive text to go into great detail on how the character is meeting their end. Along with these descriptions come sound effects and voice acting which do a good job of conveying the horrific ordeal the character is going through. It reminded me of Death end Re;quest but at least here it’s more thematically consistent.

Just having a black screen as scenes are described can feel a little cheap and it also lessens the impact when a black screen would be suitable for the scene. I don’t necessarily need to see a detailed drawing of the death but I’d also argue I don’t need multiple sentences describing it either when I got the picture after the first one or two. It’s where the game gets its horror elements from however, as this isn’t a scary game. Even on the odd occasion when something is chasing you it’s not scary and the game doesn’t resort to jump scares. It’s the situation and the dark outcomes that are horrific. 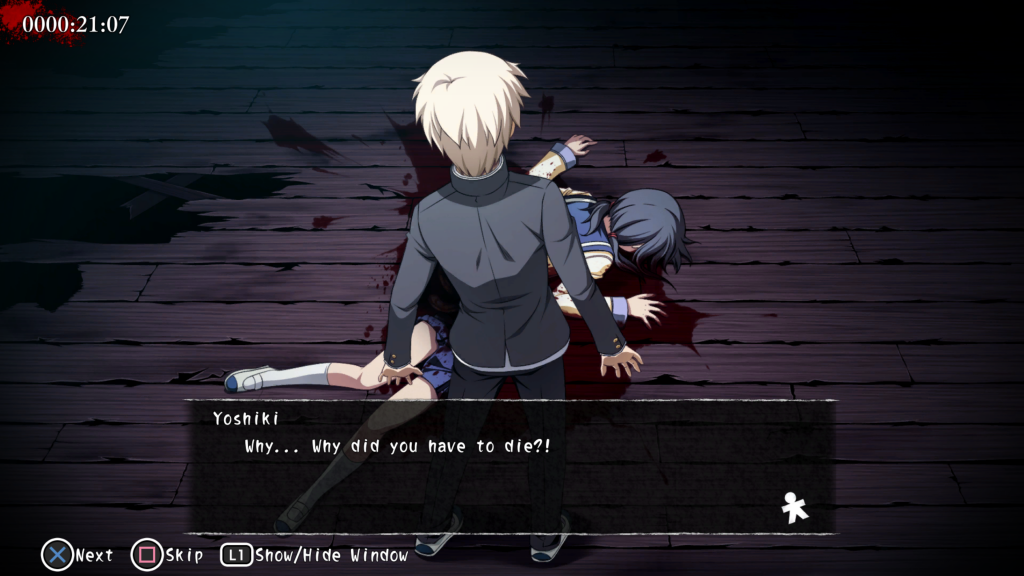 Early on in the game it balances between the gameplay, however limited it may be, and visual novel bits pretty well. There are five chapters and the first few take around an hour maybe, depending on how stuck you get or how much you mess up. The last two tend to get a little visual novel heavy for me however, with the last one basically having a long conversation every time you take a few steps. This also drags out the chapter’s length to the point where I was relieved come the end.

Except that’s not completely the end as there are some extra chapters you unlock playing through the game, some of which are unlocked through getting certain wrong ends so there’s a lot to get through if you’re so inclined. Some fill in some gaps in the story whilst others, well, I’m not sure what the point of some of them are. There’s a new one too, which I can say with confidence as it’s based in 2020 and references the pandemic. There are also student IDs to find in the levels as a collectible that the game keeps track of. So plenty to do beyond just getting to the end. 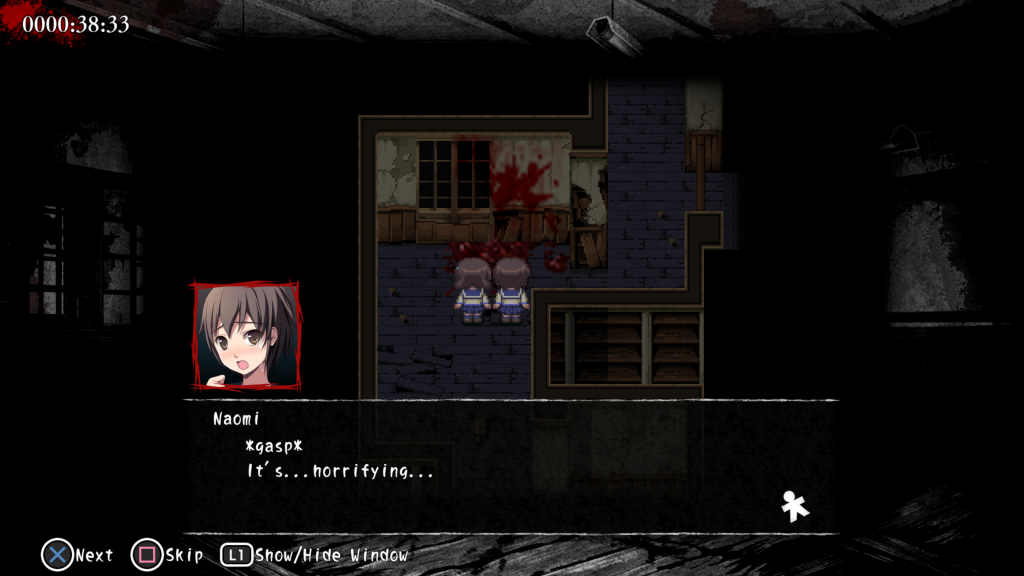 As I said in the opening paragraph, in general visual novels aren’t my thing. The gameplay sections broke up the early stages well but they fell away the further I got into the game at which point my interest also lapsed a little. The atmosphere is strong and the characters are decent enough, though keeping track of them all isn’t easy as it cuts between each. Visual novel fans, if they haven’t checked out Corpse Party already, should probably take a look. Though if you’re a little squeamish then it may not be for you.

Corpse Party (2021)
6 Overall
Pros
+ Strong atmosphere
+ Good acting
+ Great music
Cons
- Gameplay is limited and strict
- Not much of an update
- Lack of CGs feels cheap
- Gets too dialogue heavy in later chapters
Summary
Corpse Party (2021) is a visual novel with some exploration gameplay and a horror theme. Graphically it's very weak but it has a strong atmosphere and sound design that will draw in fans of the genre that can stomach it and haven't played one of its previous iterations.