Carrion is a 2D Metroidvania style title with a fun reverse horror/sci-fi theme.  It comes to us from Devolver Games and was coded by Polish developers Phobia Game Studio.  Originally released for all the other systems in 2020, PS4 owners have had to wait over a year to get their hands on it.

In Carrion you play as an amorphous biomass called ‘The Monster’ who has been captured by scientists and is being held in a research facility.  However, you break out of containment and begin the task of try to escape the building.  Your monster is best compared to the one in the 1982 film The Thing, all tentacles and teeth, and you move around using the left stick while the right stick is used to aim your tentacles.  The shoulder buttons and triggers are used for your various abilities which are earned along the way by absorbing new genetic material. 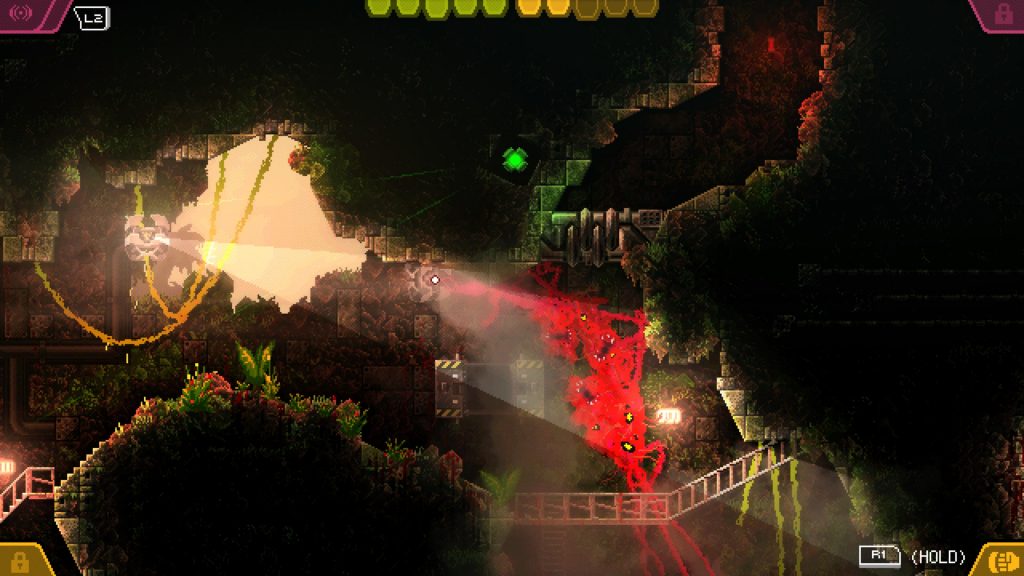 As we said, this is a Metroidvania and so very quickly you’ll be seeing pathways blocked by suspiciously specific obstacles which of course you can’t get past at that point.  So, you’ll keep pressing on, finding you way through to the next upgrade or the next exit.  Essentially the game is set in a maze of corridors with plenty of one-way tunnels, locked doors and switches to complicate matters.

In terms of upgrades and obstacles, these are pretty straightforward.  Initial barriers will require the upgrade that lets you smash your tentacle through them but to do that you’ll need a lot of biomass which will put you in your large form.  You’ll also unlock a long, snapping tentacle move which will let you pull switches from further away but to do this you’ll need to be smaller but you’ll be able to change up by depositing half your mass into specific pools of water.  Another ability you’ll unlock later on is to go invisible which will let you get past security lasers.  These don’t hurt you but they will trigger locks on doors.  Again, it’s more about traversing the maze and backtracking. 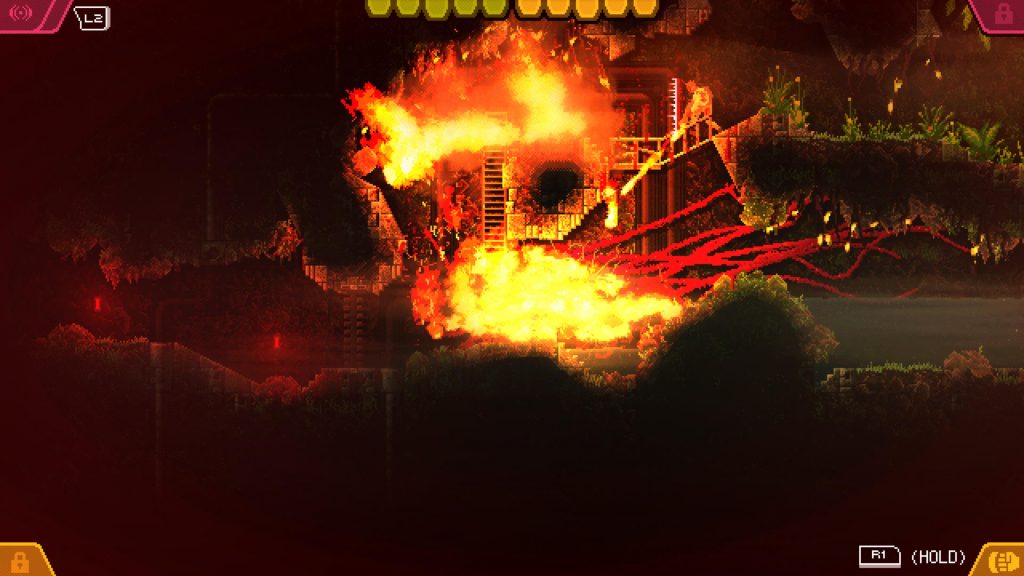 There are more and more of these abilities but the issue with Carrion is that they don’t make you bigger, better and stronger but rather just let you open doors or squeeze through obstacles that you couldn’t before.  There is definitely more of a focus on navigating the maze than there is on the combat which is a bit more of a messy, visceral thing.  Unlike the film The Thing, you don’t replicate people, which is a shame actually as that would have been an interesting mechanic, and instead you’ll just spend your time smashing them against walls, floors and ceilings before adding them to your biomass.   This generally involves holding down R2 and thrashing the left stick around.

Initially, you’ll just be dealing with scientists who’ll die without much of a problem but later on you’ll encounter armed guards and this is where things will get trickier, especially when they armed with shields and flamethrowers.  Taking those guys out can be really difficult because once they see you it can be hard to get past those shields.  Your monster is a pretty large sprite that takes up a lot of screen space and so trying to play this stealthily can be tricky.  If you die, you’ll go back to a previous checkpoint, so it’s not too much of an inconvenience. 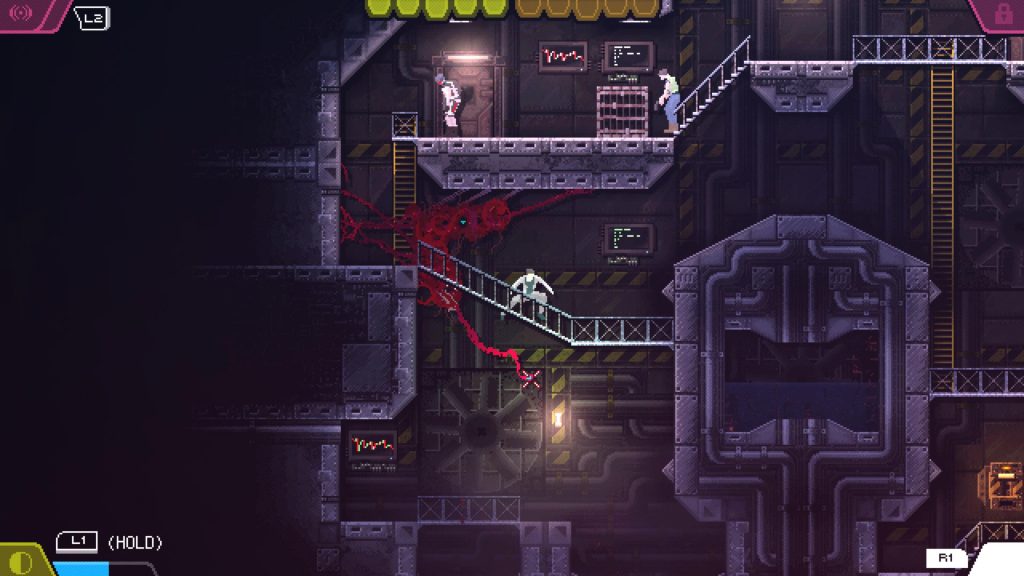 The main difficulty in the game comes from restarting it after a night’s sleep.  There’s no in-game map and so trying to figure out where you are and where you were going is a real ask sometimes.  We really struggled with this as we played the game over three sessions.  And sometimes the way ahead isn’t always that clear.  It could be a hard to see tunnel or a switch hidden in a corner somewhere.  And it’s a little demoralising really because you know that you’ll have to go back really far once you get a new ability because you’ve seen the related doors/obstacles ages ago and now have the power to get past them.

There in lies the main problem that we have with Carrion, it’s really just a convoluted maze game.  The setting, a grim industrial looking base, means that it’s just the same dank, metal corridors throughout so navigating it is a real chore at times and the backtracking is unsatisfying and irritating. 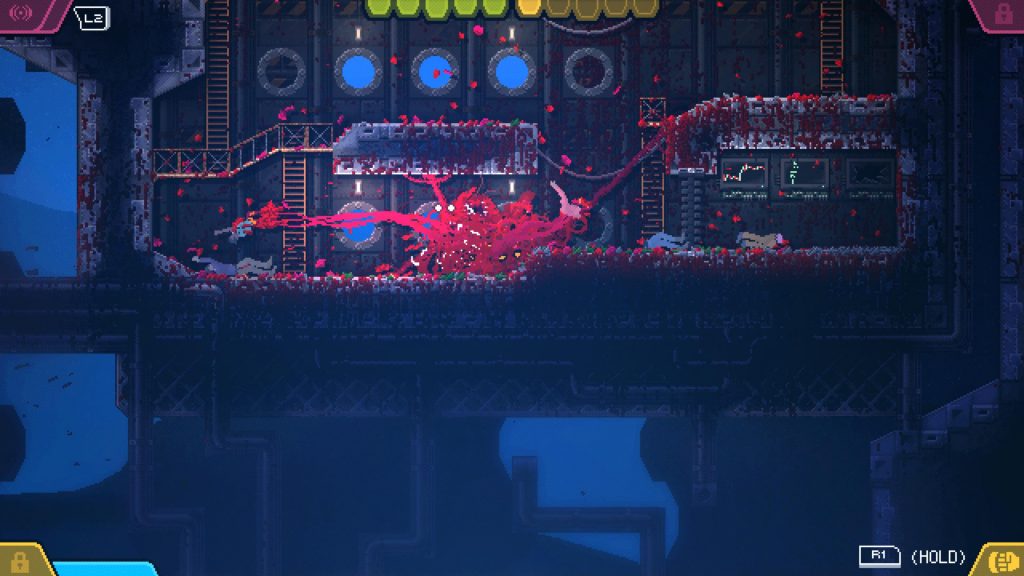 It’s a shame though because your monster is quite unique in the gaming world.  We always like retro-styled games that clearly couldn’t have been made back in the day and that’s true of Carrion and that’s really down to the monster.  The way it moves really is something to behold and the dark atmosphere and screams of your prey really do give the game a different feel.  It looks great for a 2D retro-flavoured effort too.   And for a while the blood and guts insanity of what you are seeing really is effective.

Ultimately, the game design doesn’t really live up to the premise.  A more combat focused approach could have been a lot of fun, especially if you could morph into specific enemy types and use their weapons but instead Carrion really is just a big maze-based navigate ’em up that soon gets a little bit dull.  But if you just fancy moving around a terrifying blob while smashing scientists, then Carrion delivers.

Carrion
6 Overall
Pros
+ The monster looks great and is fun to control
+ Good '80s horror atmosphere
+ Great animation
Cons
- Combat is a bit weak
- Maze-based level layouts are a bit boring to play through
Summary
Carrion offers up a unique spin on the old Metroidvania concept but is let down by maze-like levels and unsatisfying combat. There's still some fun to be had but ultimately we found ourselves getting more and more irritated with the level design and constant backtracking.