Gun Crazy is a run and gun, side scrolling shooter that comes our way from Ratalaika Games, cheap and easy platinum trophy specialists. Gun Crazy ticks all those boxes but there is no Vita version, at least for now although there seems to be one in the works, so you only get one platinum this week. 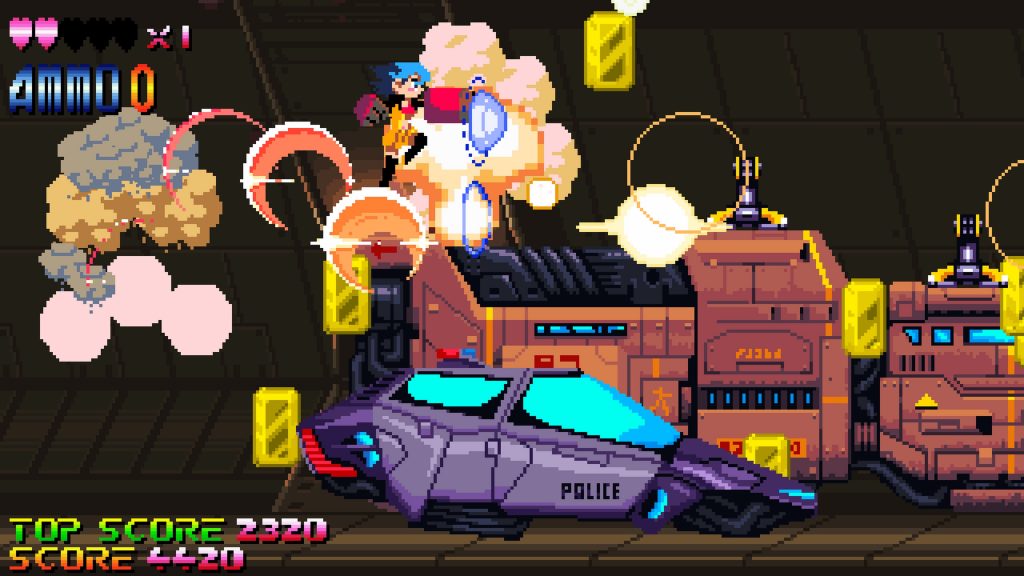 There is no set up story-wise here. There is a controls tutorial which simply tells you which buttons to press and you see what they do in a safe zone, other than that you can select Arcade mode or Options with a 1CC mode available after you’ve beaten the game which removes your ability to continue upon death as you’d expect.

Once into the action you run to the right whilst shooting enemies as they spawn in. Your default blaster doesn’t cover the whole screen with the bullets dissipating before long but enemies that get too close can be dispatched with a swift punch. Manoeuvrability-wise you have single and double jumps and a dash ability. I’ll let you in on a little secret too, I completed the game without this knowledge, the dash ability allows you to dash through bullets. On top of that dashing through bullets actually collects them and adds them to your ammo stockpile for the limited use weapons you find through the levels which can be real game changers. 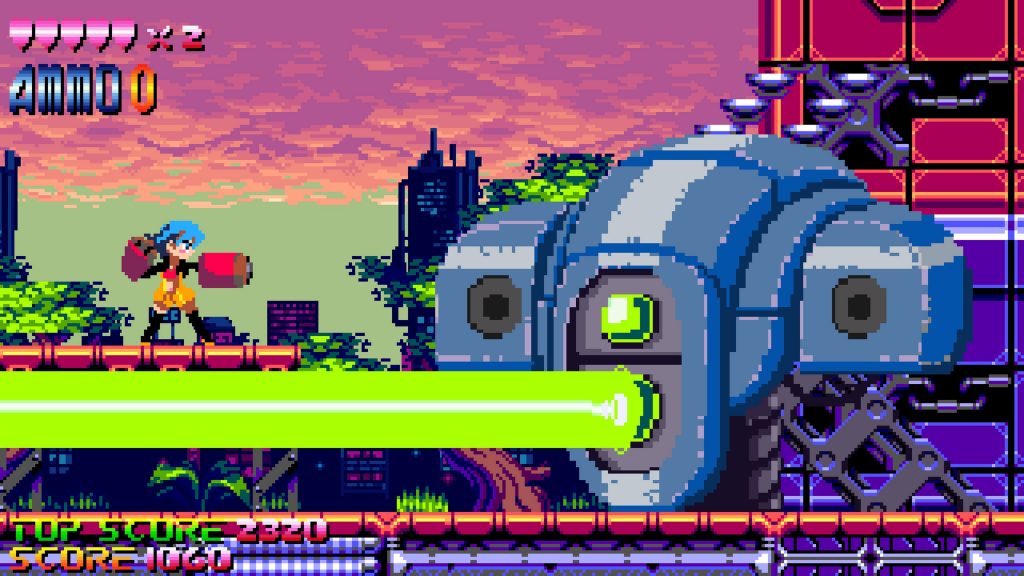 As well as the cannon fodder enemies there are slightly stronger enemies that take a few more hits, mini bosses and of course end of level bosses which every game of this type needs. The manoeuvrability is only for dodging enemies and bullets, there’s no actual platforming required here so you can concentrate on enemies and bullet patterns which the game likes to fill the screen with. Bosses have predictable patterns but, at least later, have a habit of filling the screen with death which is where the challenge comes in. 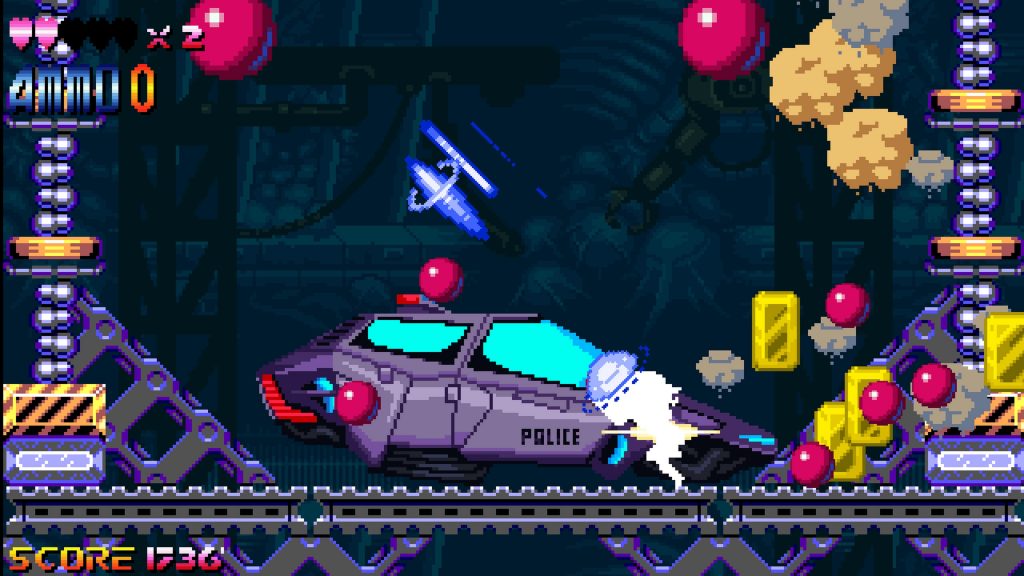 You can take five hits before you lose a life, you have three lives and if you lose all those then you can continue three times. I game overed the first time through on the final stage but completed the game on my second go. Not that impressive as there are only four levels and as usual for Ratalaika games you don’t even have to complete all of them for the platinum. You’ll have the platinum after completing level two which took me under ten minutes from starting the game, a full run through doesn’t take too much longer.

For the price it’s a short but decent enough experience. For comparison, for a little more money (and a much tougher platinum) Bleed and Bleed 2 exist and they’re fantastic games of this type. Gun Crazy feels good to play but the screen can get a bit hectic (I suggest turning off screen shake), the hit box feels slightly off, it’s all a bit basic and ends before it has a chance to really get going. 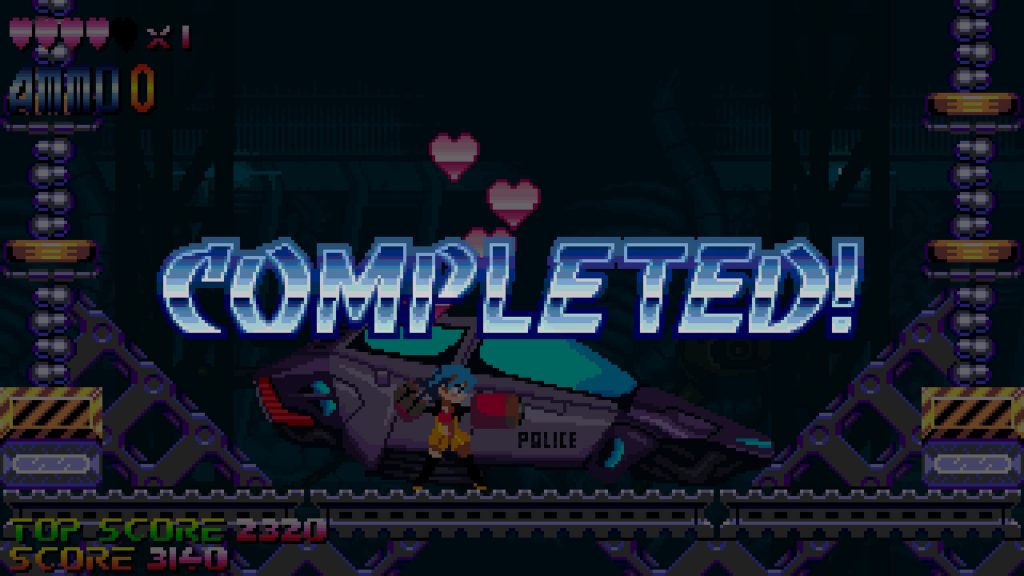 Gun Crazy is another pixel graphics, short, easy platinum from Ratalaika. They know their audience and if that’s what you’re here for then they’ve delivered yet again. If you want a side scrolling shooter for PS4 then plenty of other options are available but if you’ve exhausted those then this will keep you busy for a bit, if you continue playing beyond the platinum and try to 1CC it.

Gun Crazy
6 Overall
Pros
+ An easy platinum
+ Some depth to the mechanics
+ A decent amount of boss battles
Cons
- Very short, even ignoring the trophies
- Screen can become very cluttered
- Doesn't truly get going
Summary
Gun Crazy is a short, side scrolling, run and gun shooter. Being from Ratalaika it's an easy platinum but the game itself doesn't last much longer unless you set yourself the challenge of beating it in 1CC mode. There is some depth to the controls but the short run time stops the game from really getting going.