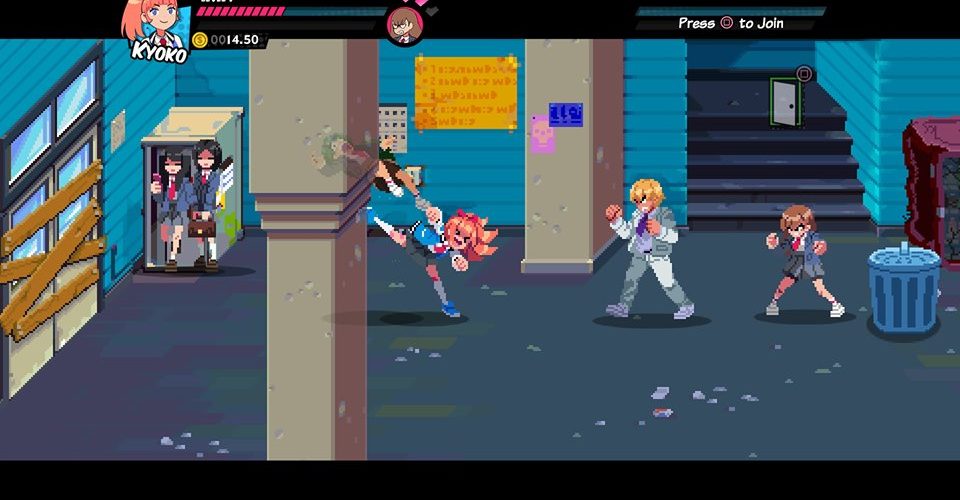 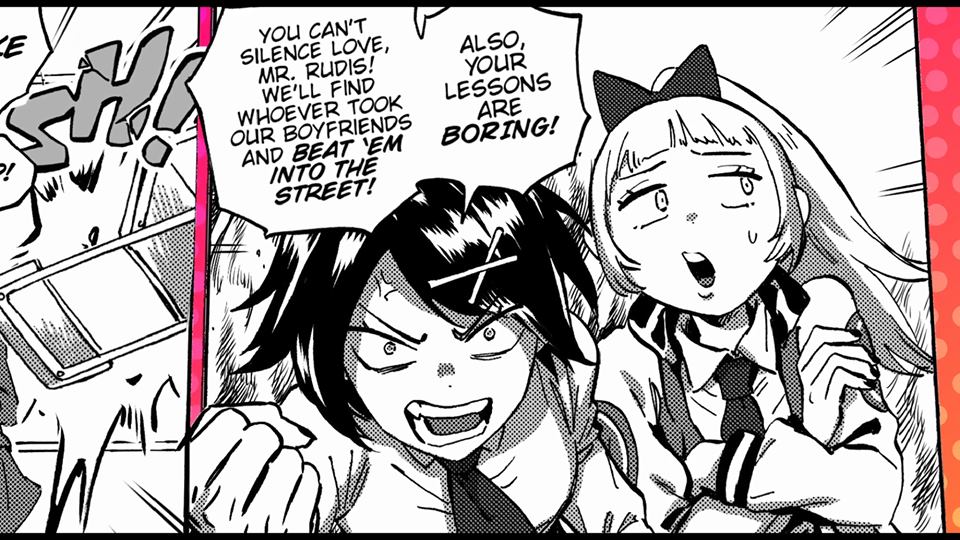 During my many years of gaming, I have played a lot of scrolling beat-em-ups. This genre has been the cornerstone of retro gaming, titles such as Streets of Rage, Final Fight and Double Dragon taking top billing for what are the benchmark of classic that prevails to this day. In amongst these and the many 80’s and 90’s license flavoured alternatives, laid the Kunio-kun franchise. Predating Double Dragon by a year, Kunio-Kun is considered one of the few innovators of the genre, introducing gamers to the concept of inter-school rivalry as tough guy Kunio takes on all comers in a brawl that takes place over entire neighbourhoods.

Such is the importance of the Kunio-Kun franchise and its arguably most notable hit, River City Ransom (Street Gangs in the west) that It makes sense that the gaming industry would remember its quirky formula and crushing beat-em-up gameplay, influencing recent hits such as Scott Pilgrim vs. the world and the subject of today’s review, River City Girls which is a direct addition to the long running franchise. 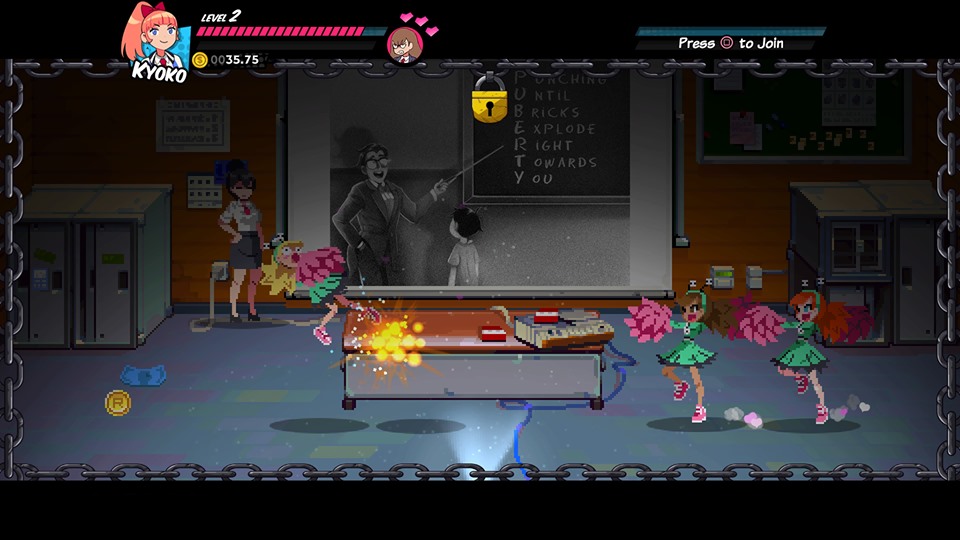 Now, a title like River City Girls may send the cringe radar off into the stratosphere. Such games, movies or cartoons that feature girl versions of the main characters have had a shaky track record in the past, conjuring images of exploitative humour or brow-beating examples of ‘notice me senpai’ type characters. However, while Kyoko and Misako follow some of those tropes, they genuinely feel like fleshed out characters from the franchise. Their story and character start out in much the way you would expect. During a school detention session, they receive word via text that their respective boyfriend’s, the aforementioned Kunio and his previous rival Riki, have been kidnapped. Without further thought, the two girls take the initiative and bust out of school, beating up as many fellow students, cheerleaders and prefects as possible on the way.

It’s a story that is very typical to the streets of River City and while it won’t win awards for those who plug their veins into lore rich RPG epics, it makes for a fun and glorifying violent narrative that keeps the laughs coming in any way possible. Kyoko and Misako are not simply fawning arm occupiers, they are an incredibly tough couple that revel in the brutality of their actions, stopping at nothing to ensure that Kunio and Riki are returned to them. Kyoko is portrayed as a high-schooler that exhibits the typical anime trope of being a somewhat cutesy character but is not afraid to talk tough and throw down. While Misako is a very aggressive character that is very much the tomboy, eschewing the typical girly stuff in favour of more brutal attacks. 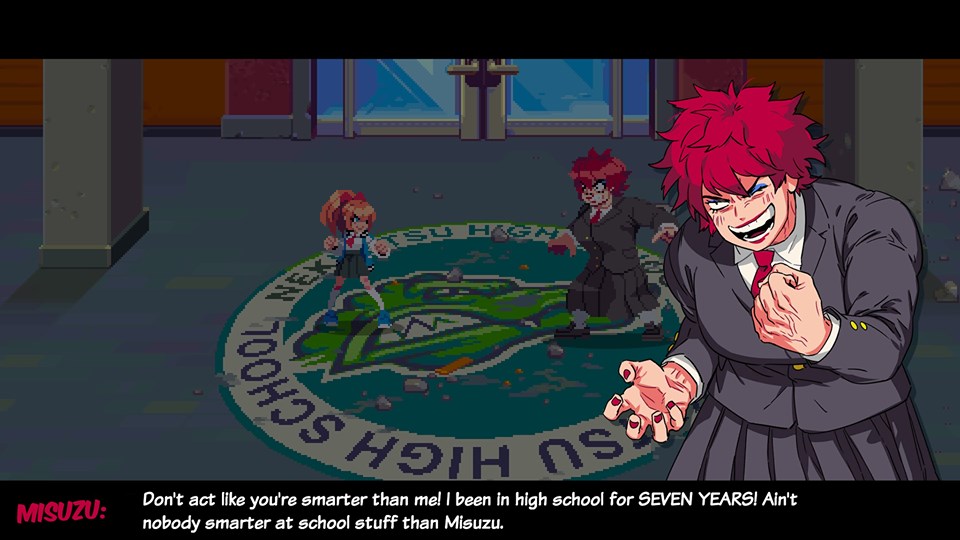 River City Girls also earns a rare distinction. The one that is generally reserved for Wayforward games who clearly pile in the love and passion that classic franchises such as Kunio-Kun deserves. This comes in the form of the humour through references. The team at Wayforward have delved deep into previous beat-em-up mainstays and have peppered RCG with as many of these as they can with a high level of success. My favourite examples being the fact that Billy and Jimmy of Double Dragon fame can be found in the dojo’s, providing moves to Kyoko and Misako with such one-liners as “I miss my brother”. Abobo also makes an appearance or two in the game, firstly in a humorous PSA that plays in the background of one of the school rooms, where he is discussing the benefits of Puberty (Punching Until Bricks Explode Right Towards You). The demonstration of love for the franchise and its history is clearly apparent and exactly what you would come to expect from the developers of such games as Shantae and Ducktales Remastered.

The overall presentation is a clear indicator of this as well. River City Girls is one of the best-looking pixel-based games that I have seen of late. Every environment is colourful and dense with unique-looking elements, keeping locales fresh while also appearing like lived in locations. Every character, bystander or otherwise is animated brilliantly, giving each sprite a personality. This personality carries over to the brief, fully animated sections when boss characters are introduced. These feel like part of a fully fledged series, thanks to the production quality. Enemies especially are very distinct, even if the typical recoloured types turn up. I simply loved seeing new enemy types turn up however, as the character looks are very well realised in style, I particularly love the cheerleader type enemies as their gleefully violent attacks always seem to marry up with the soundtrack. 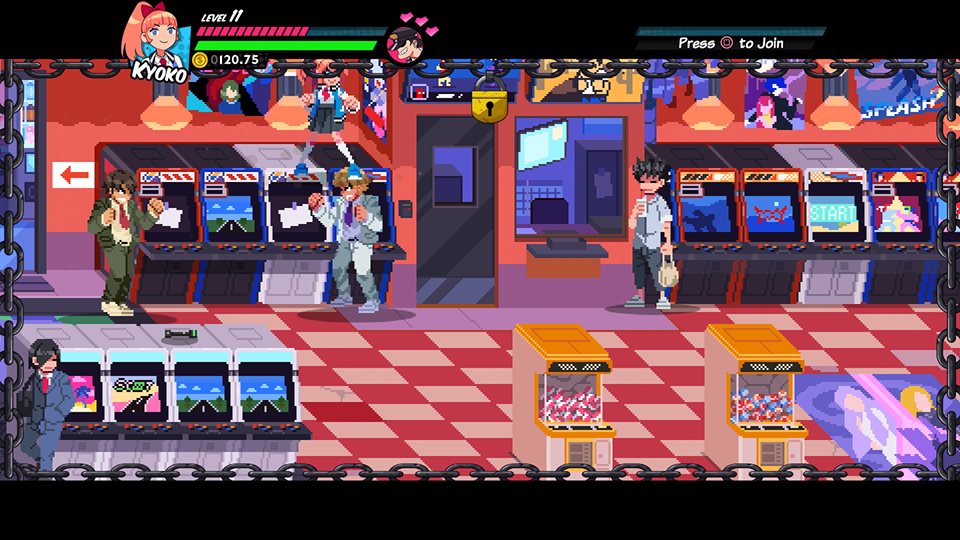 Speaking of which, I must give a special mention to the soundtrack in RCG. This is another clear sign of love of the era of River City’s release. The tunes follow a retro-wave inspired composition with a heavily synthesized sound. To my ears, it is fantastic and sets a rhythm for the game throughout. The only caveat being is that it can grow to be a bit samey as some audio motifs are repeated across areas. However, what keeps things fresh is that sometimes you will encounter an area which has a new composition with the addition of lyrics, something that I was not expecting when going in. While these may not be to everyone’s taste, I have to say that I am a big fan of these songs, they are well sung and while the lyrics are a bit twee, they suit the gameplay well.

The Kunio and River City games are notable for not just being beat-em-ups of course and this is true in River City Girls. The game is non-linear, allowing for branching paths, shopping and levelling up in a very RPG-lite manner. As you down enemies, you earn both XP and cash. XP boost your characters stats in the typical fashion, while cash allows you to buy extra moves for Kyoko and Misako, allowing the player to fully customise their character with their own move sets, accessories and more. This opens a lot of depth and a welcoming way for players to overcome challenges as you can grind through the streets to earn better moves or health-giving items to give them the edge when the going gets tough. The amount of moves on offer is also incredibly welcome, ranging from different flavours of the starting moves, such as the frankensteiner through to the Chun-Li style lightning kicks which give you a quick flurry of attacks to combo and knock opponents away. 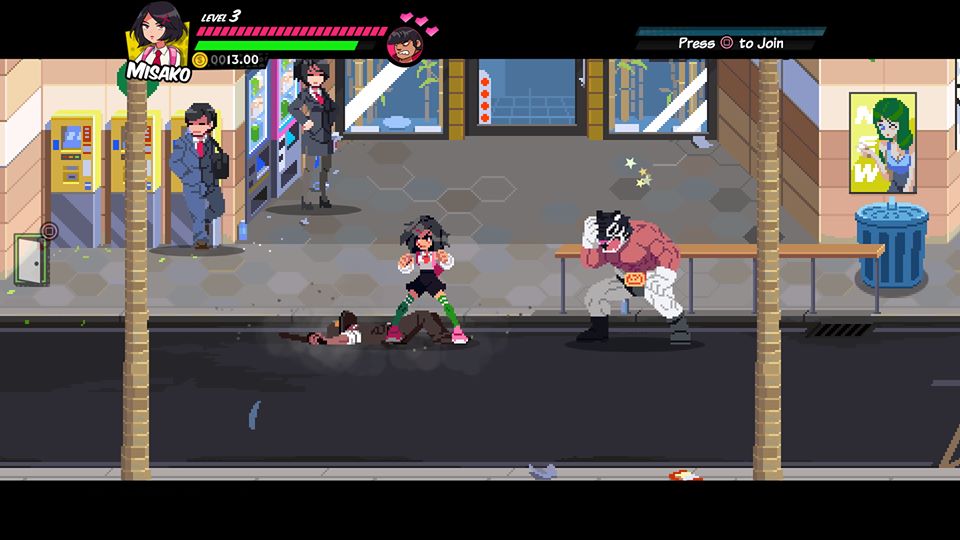 As for the fighting itself. River City Girls is very adept. with the help of the dojo, there are a lot of moves to utilise, making for some devastating and acrobatic moves on screen. This ranging from your typical punches, kicks and throws to devestating double drop kicks and a rainbow-dab that sends enemies rocketing across the screen. To help with the fight there are random items on the ground to pick up that range from yo-yo’s, fallen enemies and baseball bats. Also, one of the neat aspects is the recruitment system. after beating an enemy senseless, they may start to plead for mercy, with this you can recruit them and summon them during a fight, allowing you to create space between you and your opponent, or to extend a combo out a bit further. This is quite handy and fun as each recruit counts towards a collectors total, in a similar fashion to pokemon.

The problem with such a set up as River City Girls, and something that has been a bit of a problem with the rest of the series, is that it becomes all too apparent that grinding for cash and XP becomes a bit of a chore. Backtracking through stages can get a bit tiresome, especially when the exciting stuff is always what is coming next. This is especially true for the rudimentary missions which range from getting an NPC a burger from the other side of town or sneaking into a house filled with squeaky toys to steal keys from the mall security guard. These missions seek to break up the fighting just a bit, however they mainly exist to facilitate more fighting or to open secret areas. Barring the odd mandatory mission or 100% completionists, these can be ignored for the most part. 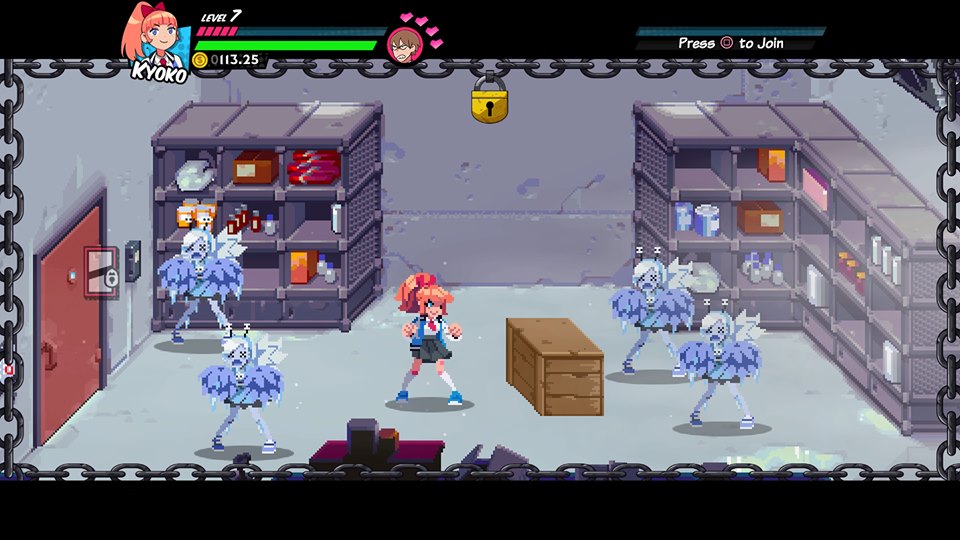 When I am saying ‘problem’ though, these are generally aspects that are typical to the Kunio-Kun school of Beat-em-up gameplay. As much as it can be tiresome for a few, it is part and parcel to the experience for many others. Either way, it is certainly not enough to cause enough of a problem for those who are looking for a solid, retro inspired beat-em-up to share with friends. River City Girls is exactly that, a solid, enjoyable game with a lot of charisma. Certainly one that deserves the attention of genre fans.

River City Girls
8 Overall
Pros
+ Dripping with references and love for the Kunio-Kun Series
+ Graphically and audibly brilliant
+ Challenging and fun gameplay
+ The two characters are great, not typical Girl alternative characters
Cons
- A lot of backtracking for missions
- Light on variety

Summary
River City Girls is clearly the result of a love and passion for the Kunio-Kun franchise and its fanbase. Wayforward has done a great job of translating the classic beat-em-up franchise for the modern audience. While also providing a funny, great looking and audibly awesome game that all beat-em-up fans should try at least once.