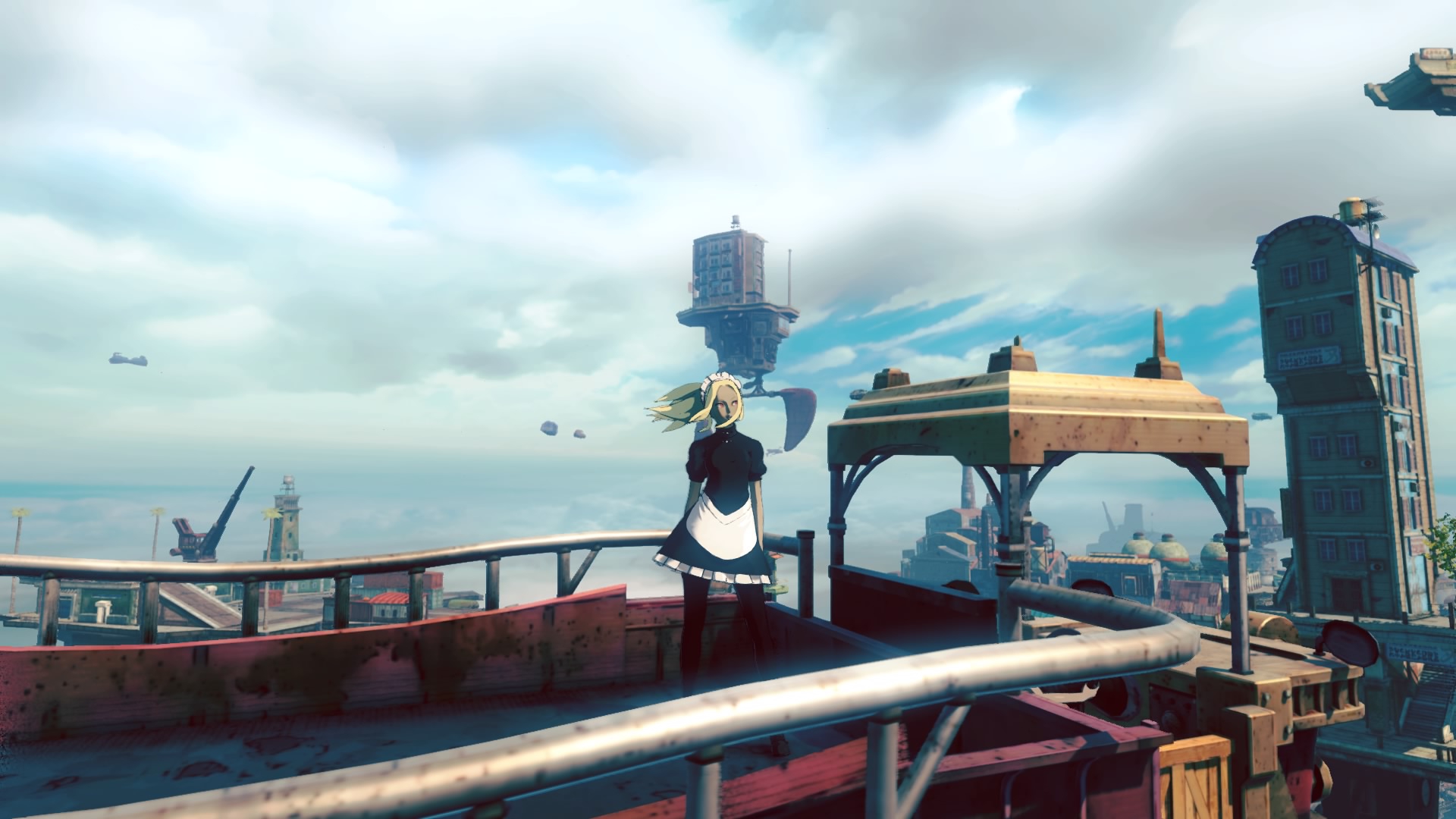 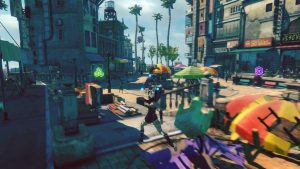 taken me a bit to get my head round what I wanted to say in my review of Gravity Rush 2.  You see I loved the first game, playing it on the Vita and the PlayStation 4 when the remaster was released, I though the whimsical style and the gravity shifting made the overall game remarkable.  In the run up to the release of the sequel I was lapping up all of the trailers and media I could find, hyped to return to Kat’s world.  When it was released I was interested to see if the game could possibly live up to my high level of anticipation.

The first thing about Gravity Rush 2 is that it starts slow, real slow.  For the first couple of hours I was unable to use my gravity powers and was traipsing round what looked like a shanty town.  It takes a good couple of hours before the game starts proper.  I appreciate many people never played the first game and the gravity powers would probably be pretty confusing to newcomers, but starting this slowly with no gravity powers almost ruins the game.

The slow start also extends to the big new feature of the game, the different gravity powers.  These aren’t introduced for hours.  Seeing as these heavy and light gravity powers formed the key part to the trailers before launch I was expecting them to show up earlier and form a greater part of the game.  When they do appear it is nice to be able to switch skills between them, slow and powerful or light and quick, but they only ever feel somehow throwaway like they have been added just to give the game a new selling point for the back of the box. 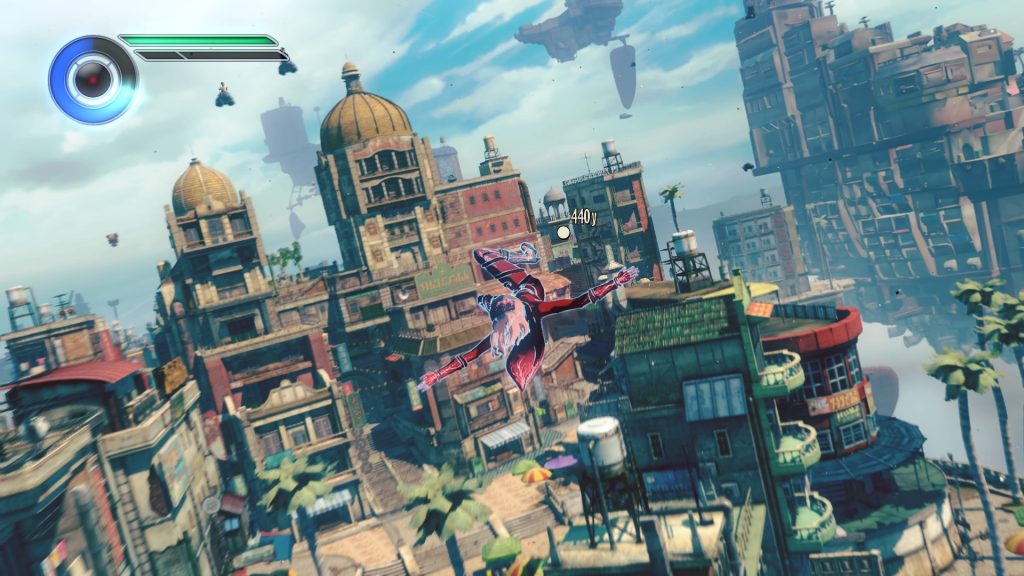 The slow start and token new gravity powers aren’t the only poor aspects to the game.  The camera is chief amongst the gripes I have here.  I know that having a camera which can deal with the upside down nature of the gravity play can be difficult, the first game managed admirably though, and this sequel does ok too.  The right stick gets a good work out with constant adjustments being made to the camera all the time, and it sort of works ok giving the crazy nature of walking on ceilings and such.   The problem comes when the game takes control away from the player, locking the camera into a certain direction during set pieces.  Every single time this happened I was left fighting the camera for a better angle and getting increasingly frustrated.

The other main issue with the game is poor implementation of stealth.  There are a few missions where stealth is key, but the game gives no visual clue as to what the enemies can see.  It felt like there was only one path to do these missions  and every other path would end in being seen.  This should come as no surprise to veterans of Gravity Rush as the first game also had these sections, but it was something I was hoping would be fixed for the sequel. 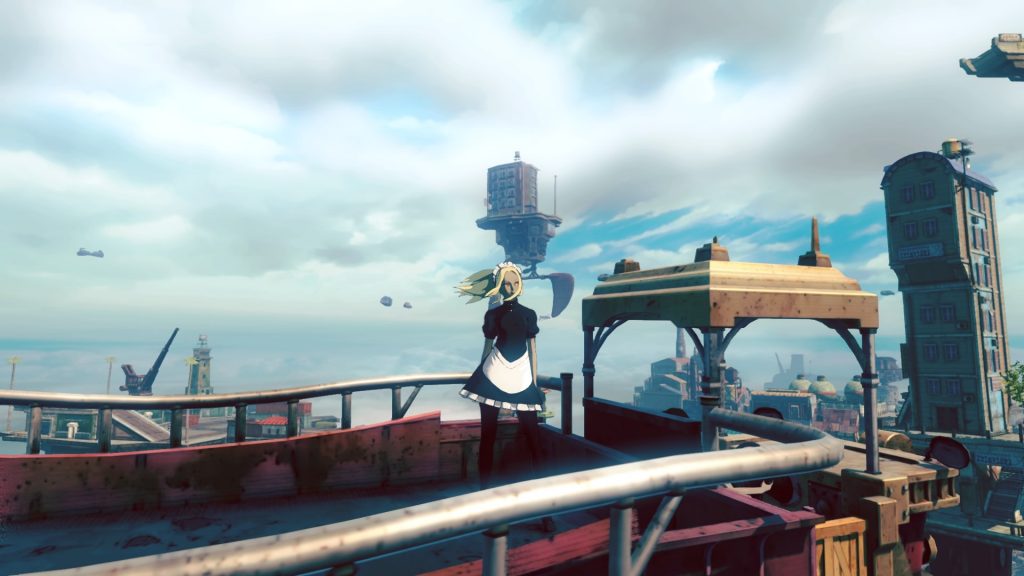 I’ve been critical so far because I genuinely wanted this game to be fantastic and the thing is it isn’t.  Thats not to say it’s a bad game, far from it, but there are a lot of niggles and most of them are carried over from the first game.  But lets get away from the bad and instead start to look at the good stuff then.

To start with the presentation is gorgeous, from the art style which looks like a pastel coloured cartoon to the music which blends jazz with a some lovely summertime rhythms.  The more secret locations also play with some truly dreamlike images making this game a wonder to behold.  This is all on top of the busy bustling scenes of everyday life and the way Kat’s gravity powers can pick up items and people so they float gently round her. Flying through gravity upside down and feet first never gets old.

I also found the overall tone of Gravity Rush 2 to be refreshingly honest and simple.  Kat is cheery and likeable never once getting upset, most of the missions involve her helping people out with seemingly simple tasks, running a market stall or taking pictures for an album.  Whilst the story does grow legs later on, is is still rooted in this very whimsical style.  The dialogue is also light and breezy and I couldn’t help but fall a little in love with the gentle setting.

As well as the story there is a tad of leveling up involved, by collecting purple gems which are scattered around town.  This is complimented by some further equipable items, overall it’s nothing too deep but it is a nice addition. The larger environments possible on the PlayStation 4 allow for some truly breathtaking moments of play.  The first time I dropped down below the clouds to seamlessly discover yet more islands to explore was a moment I won’t forget in a hurry. 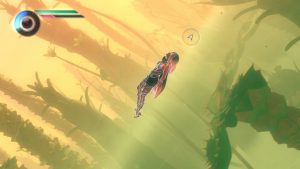 overall then I do sort of love Gravity Rush 2 despite its flaws, and there is nothing else like it on the PlayStation 4.  If you can look past some dodgy stealth and tricky camera issues this is a great game.  Maybe not one to pick up straight away but if the price drops this is well worth a purchase.

Gravity Rush 2
7 Overall
Pros
+ Falling through gravity is the best of fun +The music is brilliantly memorable + Visually it looks excellent
Cons
- Terrible camera issues spoil the fun - Compulsory stealth sections are poorly implemented - Takes a good few hours to get going
Summary
Gravity Rush 2 is a tonne of fun to play, and falling through the air upside down is an image that is unique and memorable. However poor camera controls and bad stealth sections really spoil the fun.