Something strange is going in the world of Neo Geo games.  Having just reviewed Andro Dunos 2, the sequel to a little known Neo Geo shoot ’em up from the ’90s, we now find ourselves reviewing another Neo Geo sequel.  This time we’re returning to Ganryu, a 2D slash ’em up platformer.  This sequel uses the same 2D format but updates things a little for modern audiences.

You play as Miyamoto Musashi, a ninja travelling through 17th century Japan, but a 17th century Japan that is full of colourful-haired demons and weird creatures.  It’s inspired by a novel called ‘The Stone and The Sword’ by Takezo Musashi apparently and, Mr Musashi must have had quite the imagination.  But essentially the plot, which is delivered mostly by static cutscenes, is easy to ignore.  Trust us, you’re going to have bigger fish to fry when it comes to playing Ganryu 2. 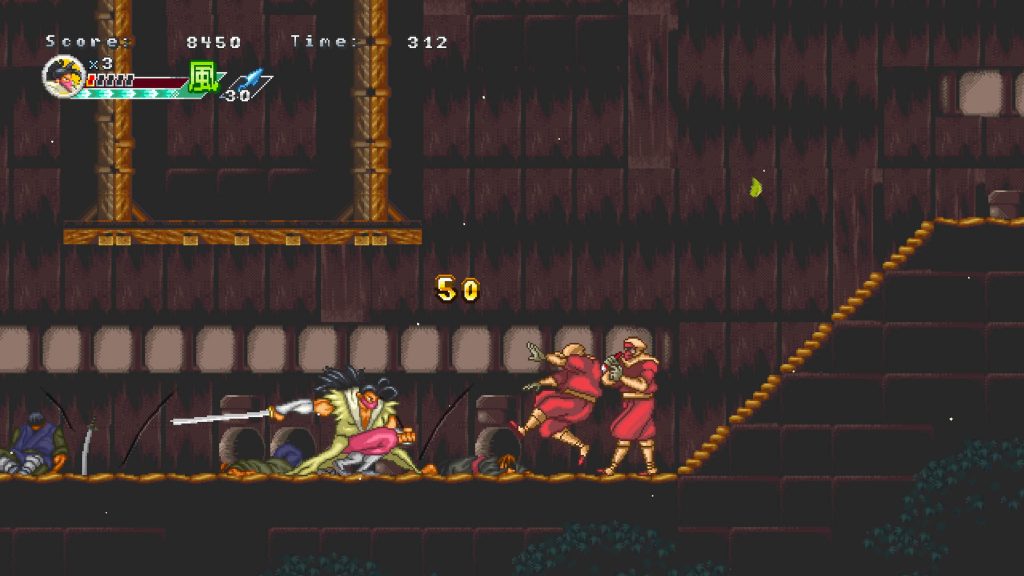 The coin-op scene was full of side-scrolling beat ’em ups and sword slashers and Ganryu 2 will feel familiar to anyone who has played the likes of Shinobi, the Sengoku games or basically any number of similar games.  You generally head from left to right, slashing enemies, jumping (and double jumping) and using a handy dash move.  As far as ninjas go, Mushasi is pretty capable.

) and you have limited throwable kunai which are useful for taking enemies out at range.  You also have a blue bar that when full allows you to fire off a ‘Kami’ attack.  There are a range of these which are mainly a bit like Shinobi‘s smart bomb style attacks but you’ll probably want to use the healing ability if you can ever stay alive long enough to fill the bar.

The game offers five levels, all of which is split into two acts.  Each act has a boss at the end too.  So really, it’s all fairly straightforward, especially if you’re a fan of the genre.  However, where Ganryu 2 excels is in its updated presentation and remarkable variety.  It’s a game that is happy to show off its improved visuals (compared to the original) by giving you lots of set pieces, interesting settings and big moments.  The action is very slick too and initially everything feels really high quality.

However, there are some issues with the game.  And pretty much they are all to do with the gameplay and, more specifically, the difficulty.  Initially you’ll be making good progress, killing enemies and picking up useful items.  But you’ll soon see some nasty little tricks to impede your progress.  Enemies teleporting right into the arc of your jumps, collapsing floors above spike traps and other moments soon make you realise that to get anywhere you’ll need to start memorising vast sections of the gameplay. 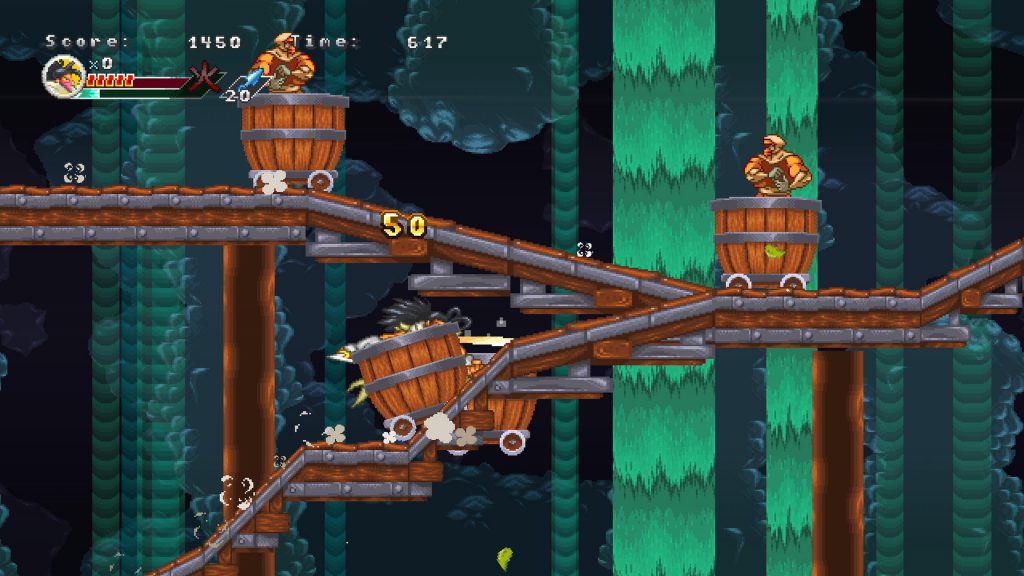 This will get you to the first act’s boss and he’ll likely destroy you at first.  So you’ll have to learn his patterns, take your time and just get past him.  If you die, you’ll go back to a checkpoint.  Die too many times and you’ll be going back to the start of the act.  It’s a bit much at first but you’ll eventually get past it.  Then you get to act two which see you jumping between moving minecarts and this whole section is a bit of a chore with mis-steps being punished with instant death.  The game gives you no indicators as to when you need to jump from a cart, so you’ll basically be punished for not knowing what is next.  You can’t play it intuitively and instead have to learn by trial and error.  Make too many errors and it’s back to the start of act one.  Get past this section and you get another jumpy/slashy section which as some absolutely bullshit vertical sections which require a lot of double-jumping and wall-jumping and that’s a problem because these moves don’t always work very smoothly.

Even if you manage to string together enough of these jumps to get to the top of a section and you might just find one of those small flying enemies waiting for you, ready to teleport into your path and knock you down to the bottom of the section.  But eventually you’ll get to the next boss who, as you’ll now expect, is basically death until you learn its patterns.  Fail to learn them quick enough and, yep you’ve guessed it, you’ll be going back to act one.

If you can beat the two acts that form a level, you’ll then be able to select the next one from the start screen but with some levels taking 20-30 minutes, falling short at a boss battle hurts more than any game we can remember recently.  Sure, if you’re going for absolute mastery, then this approach can work but we much prefer games that allow you to get through the game and then give you incentives afterwards to master them (either by way of a good scoring system or even some trophies).  You even get stripped of extra gear, kunai and Kami power when you die.  It reminds you of dying on a boss battle in R-Type and then having to restart the fight armed with your basic weapon only (which essentially meant you were absolutely screwed). 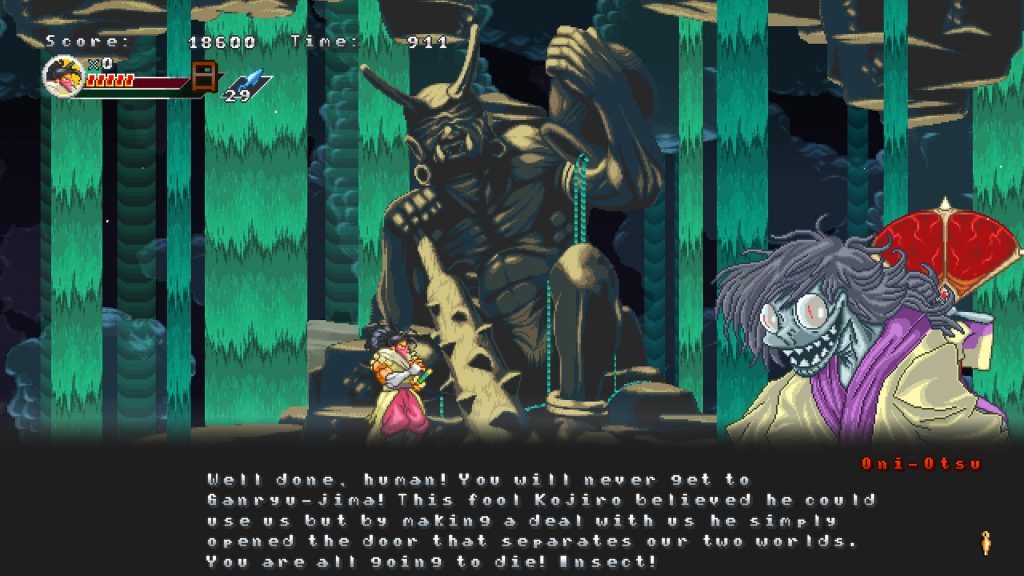 Add to that some performance issues as well and we can help feeling a little disappointed that the game doesn’t quite live up to its excellent presentation.  Little niggles like not being able to remap the controls or adjust the difficulty just seem unnecessary.  And if we compare it to the recent Okinawa Rush, we’re a little underwhelmed.  They may share similar gameplay ideas and are both dripping in creativity, but where Okinawa Rush managed to be easy to play but hard to master, Ganryu 2 just feels a little bit mean-spirited, too rooted in an idea of old-school difficulty that only existed to part gamers from their pocket change.  That’s just not how games work these days.

If you can stomach the near-constant punishment, there are some great things to see in this game.   Futuristic stages, big bosses, great set-pieces and even a shoot ’em up section are all waiting for you but it’ll take all of your patience to see them.  The problem is that instead of being excited to see them, we found ourselves dreading them and wondering what hellishness was ready to be unleashed upon us.  However, if you absolutely love the genre and have the skills/stubbornness to get through the game, you’ll likely love it.  But there’s very much a chance that you’ll hate it a lot, so definitely do your research before picking this one up.

Ganryu 2
6 Overall
Pros
+ Really nice visuals
+ Good variation and set-pieces
Cons
- Relies on memorisation a lot
- Controls aren't up to some of the platforming sections
- Punishes mistakes very harshly
- Can often stop being fun
Summary
Ganryu 2 takes the original arcade game and boosts every aspect of it and while that means you get some lovely visuals, great variation and slick gameplay it also comes with the kind of difficulty that was fine back in the '90s when coin-op manufacturers were only interested in taking your cash but seems needlessly harsh in 2022.