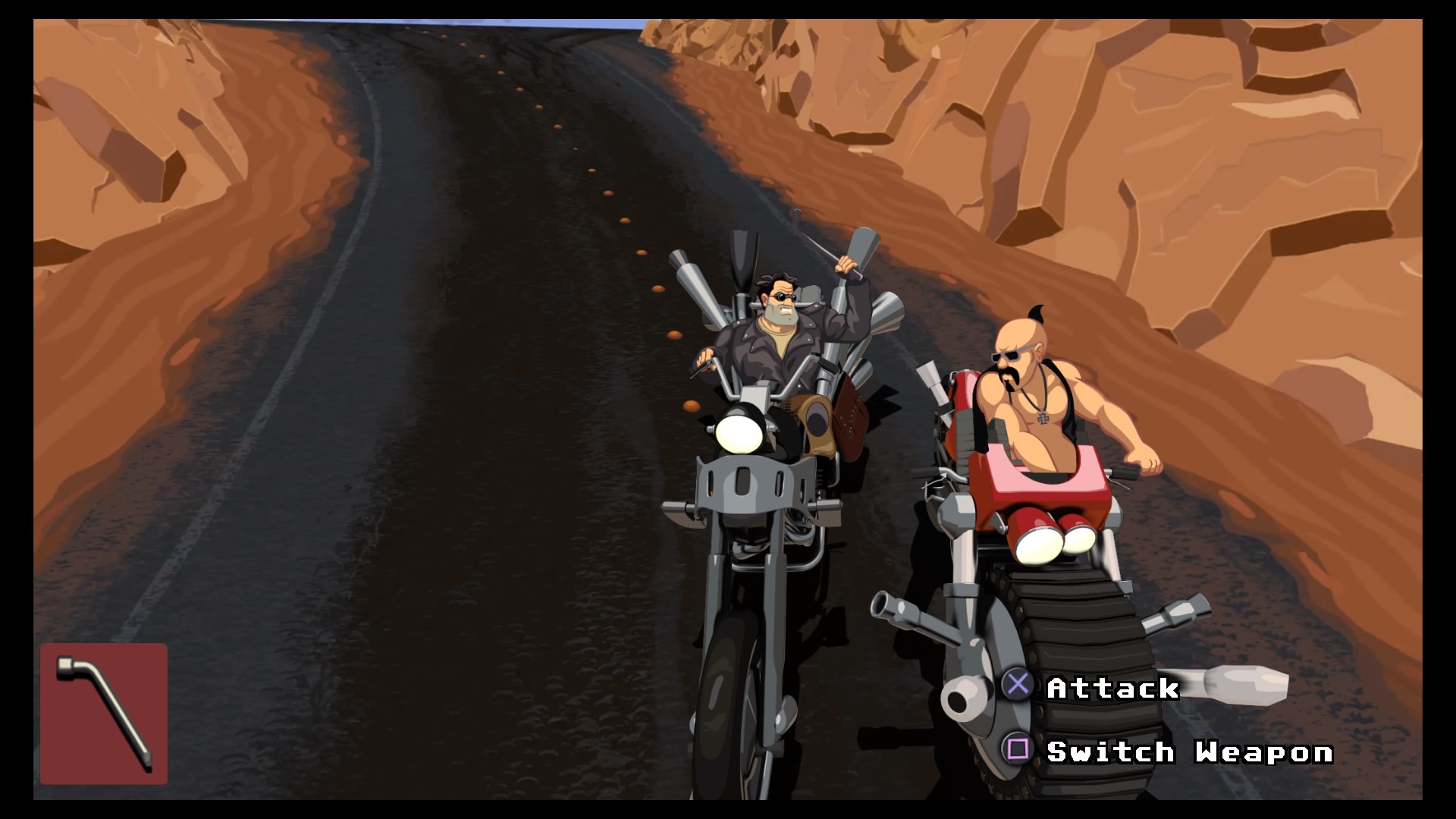 Tim Schafer is one of the people who worked with Lucas Arts back in the halcyon days of the adventure games and was heavily involved in the genre classics such as Day of the Tentacle and Grim Fandango.  With his own company, Double Fine, Tim Schafer has been on a mission of sorts to remaster and catalogue his old games and its now the turn of Full Throttle to be remastered.

Releasing originally in 1995 Full Throttle told the story of a biker gang in a near future America and how their leader, Ben, gets framed for a murder. This remastered version has exactly the same plot and scenes as the original and as such you can look to original reviews to see how this was received at the time.  I remember playing it and thought it was sort of ok if a bit short and also lacking the verb bar of the other games. I still feel much the same now that over twenty years have passed. The story still sort of holds up from what I remembered, and I still have the same quibbles as before, particularly when considered with recent examples of the adventure game genre. 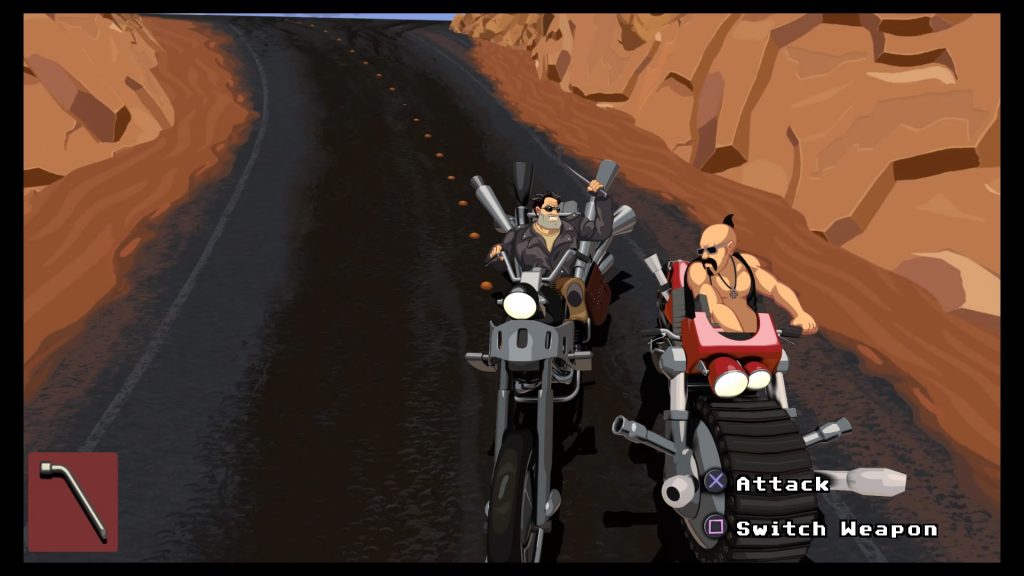 Whilst Full Throttle is definitely an adventure game it does take some serious departures from the standard template. The first thing you’ll notice is there isn’t any real inventory management here and as a result the puzzles are much more simple, reliant on using one item at a time rather than combining two or three together to make a new item. This simplification was something I had mixed, if slightly positive, feelings about when I played particularly coming off the busy work of Day of the Tentacle, looking at it now though and it definitely does feel a bit too simple.  There isn’t any real challenge in the puzzles and I missed having a more fully formed inventory to explore and play with. 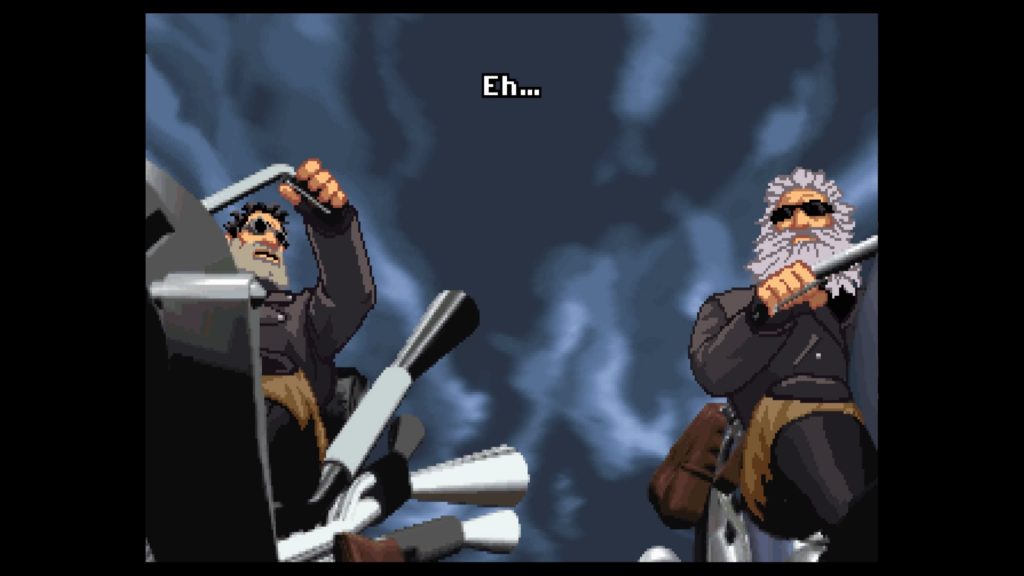 Graphically Full Throttle has always looked great in that typical Lucas Arts style, the pixel art is excellent and full of character.  Gladly the whole game can be played in this style and is presented in a black bordered window.  Being a remastered version though the game also has a shiny new coat of paint and can be played full screen with a new crisp art style. These styles can be switched between on the fly and this always gave me a little smile when I saw the difference between the two.  The full screen modern mode copies the pixel art exactly but the wider screen allows for more detail to be put in each scene and really adds to the sense of scale in some of the wider landscape shots. The modern art style may also help newcomers to the game as there is no getting away from the fact the 1995 graphics do look dated when compared to other adventure games on the market now. 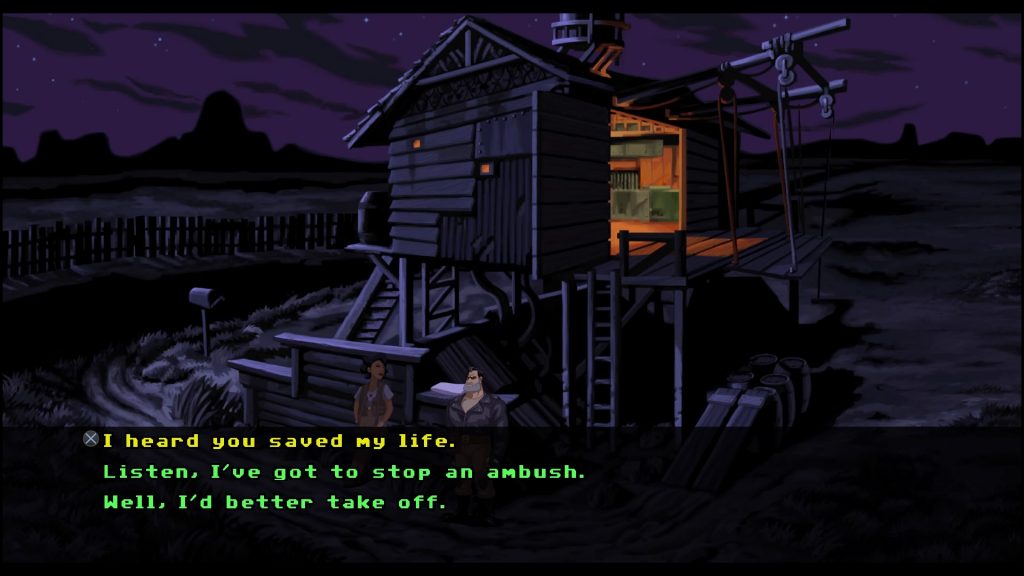 Rounding out the remastered package is a decent selection of extras. There is access to an audio commentary by Tim Schafer and some of the crew which is great to listen to, with lots of back story and great little nuggets of information.  This is the kind of stuff you very rarely see on game re-releases and it’s excellent to see it be included here, I just wish more games would get this treatment. Excellently you can mix and match how the game is played too, so if you want you can have the retro graphics but with modern voices. The game also includes a fair bit of concept art and sketches which are unlocked as progress is made, again this is a nice inclusion and gives some understanding of the development of the style of the game.

Full Throttle Remastered then is a great example of a remaster done well, keeping the original game intact and only adding value to the overall package. Adventure games are a niche corner of the market nowadays and I doubt if this will have broad appeal to attract the attention of anyone other than fans, but for fans this is pretty much all you could ask for.

Full Throttle Remastered
7 Overall
Pros
+ Developer commentary is great
+ The new visuals look nice and clear
+ It still plays a decent adventure game
+ It will appeal to fans of the genre
Cons
- The lack of traditional puzzles makes the game a bit easy
- It isn't a huge game and will wrap up in a few hours
- It probably won't attract a new audience
Summary
Full Throttle Remastered is a great example of a remaster done well with loads of added extras and different ways to tailor how you play it. Adventure games are a niche corner of the market nowadays though and I doubt if this will have broad appeal to attract the attention of anyone other than fans, but for fans this is pretty much all you could ask for.