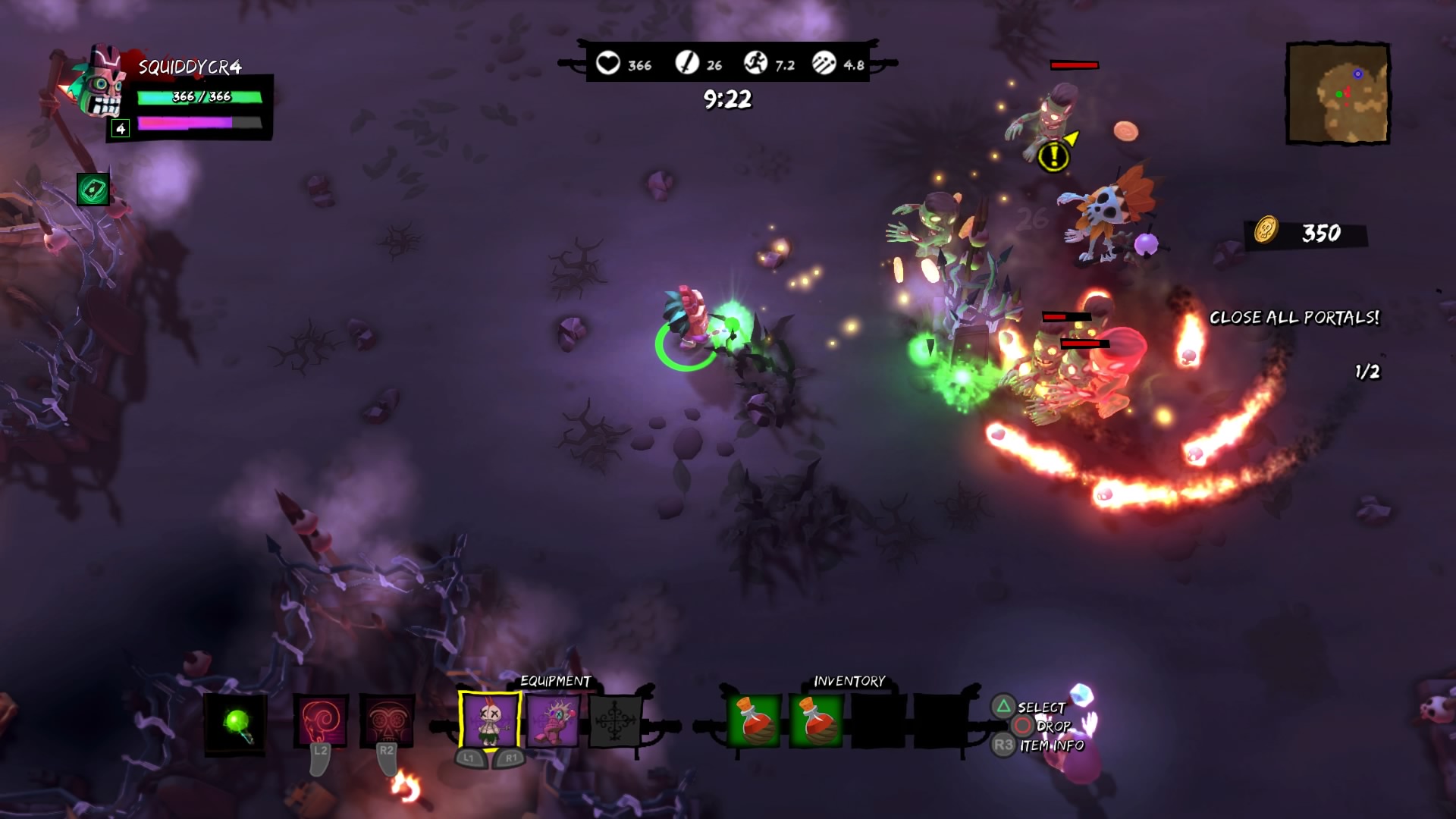 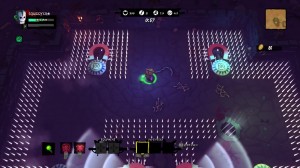 I’ve said it plenty of times before.  There are too many Roguelikes and randomly generated levels is an excuse to not make proper levels.  However, if you get your gameplay right and you do the Roguelike stuff intelligently, you can produce a decent game and  Full Mojo Rampage is a good example of this.

The game is set in a cartoony voodoo world and the idea is that you’ve got four quests to complete for the voodoo Gods.  Being a Roguelike, these are pretty tough.  The key to success is patience.  You’ll fight, you’ll die and you’ll be reborn stronger (as long as you do enough to level yourself up).  This slow and steady progression underpins the game.  Each time you level up, you can put points into health, damage dealt, firing rate or speed and this is a good thing because you’re always earning some sort of progress.

You can also unlock masks (these seem to just be aesthetic), pins (upgrades to your stats), Loas (these are voodoo spirits that change your attacks and abilities) and also temporary boosts.  There’s a lot to consider but it’s not too complicated and it’s always good to have a bit of customisation in games like these. 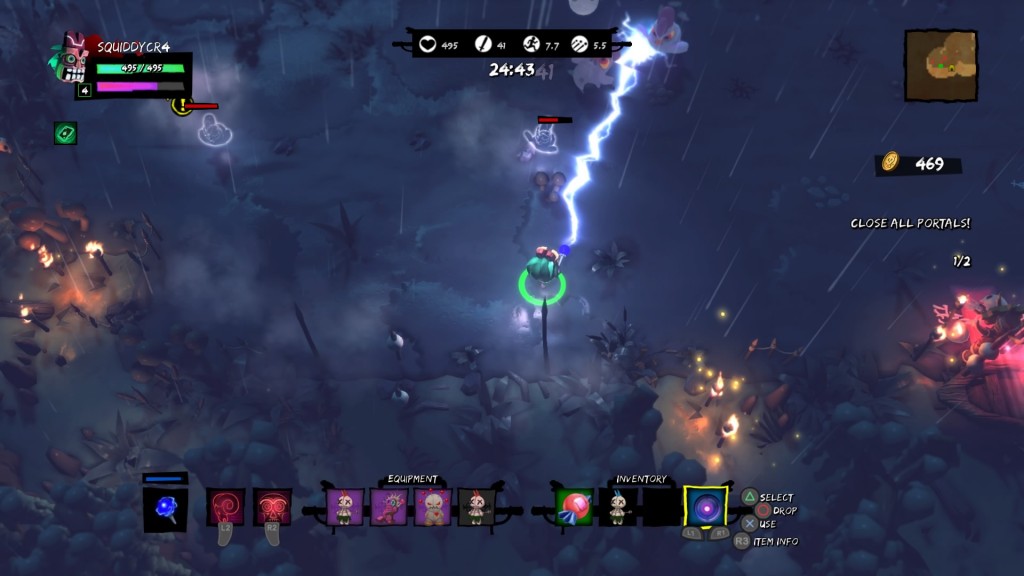 Once you’ve configured your character and get into the game properly, there is even more to consider.  As you blast through the hordes of enemies, they drop more items that you need to sort through.  Wands are temporary weapon types (these include things like lasers, big bolts of energy and fast firing options), single use items (such as potions) and mojos.  Mojos are little voodoo dolls that give you boosts (to health, firing, healing etc) and are very useful.  Space is limited though so you’ll need to pick wisely and hope to find a ‘mojo mixer’ station which will let you combine mojos to save space.

These in-game finds are great but they are lost when you die (or complete a quest) so don’t get too attached.  They do encourage patience though.  Much like Rogue Legacy, you’ll get to a point where the early levels might be trivial but it’s still worth exploring in order to make sure that you are better prepared for what is to come. 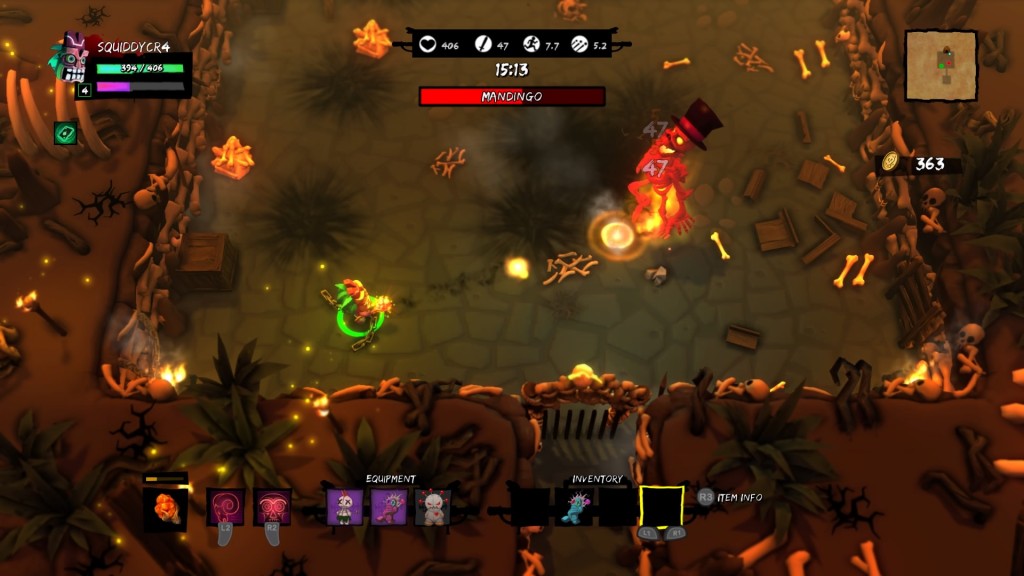 The actual gameplay is your standard seen-from-above twin-stick gameplay.  The game uses an aim to shoot (ie – you just push the right stick to fire, no buttons) thankfully and it all feels nice and slick.  The dark but colourful graphics take a little getting used to but before long you’ll be making solid in-roads towards the end of quest boss.  It feels good to play but the difficulty does ramp up pretty quickly and grinding levels will soon become your best key to success.  That is simultaneously what makes these games addictive but also sometimes a little dull.  Full Mojo Rampage‘s smart customisation options help here but this is still pretty grindy.  The game’s sense of humour and host of unlockables will keep you going for some time though and decent local and online co-op options also make a difference.  I mean who doesn’t love a bit of online four player co-op? 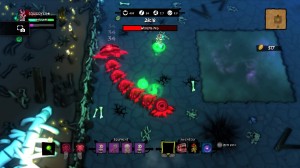 Despite the game’s Roguelike RPG trappings, this is actually a pretty decent on-foot shoot ’em up and as such the mandatory boss battles are there.  So far, these have been pretty good with nothing too showstoppingly difficult.  This is good as if you die during a quest, you’ll be going back to the start.  The difficulty curve is fair but steep.  Beating the final boss of quest one might give you some confidence, but this will soon be kicked out of you at the start of quest two.  It’s all good even if you do wonder if they’ve judged the difficulty this way in order to disguise the game’s relatively short length.

Although I’m really tired of this genre and there are several other options out there to pick from, I really like Full Mojo Rampage a lot.  It’s not going to displace Risk of Rain or Rogue Legacy from the top of the list but by being fun, and making good Roguelike decisions, it is certainly a game I’m happy to recommend.  It’s a bit more focused on fun than either Neon Chrome or Enter The Gungeon but they might be a tad more slick.  Either way, this is probably the one I’d pick over those.