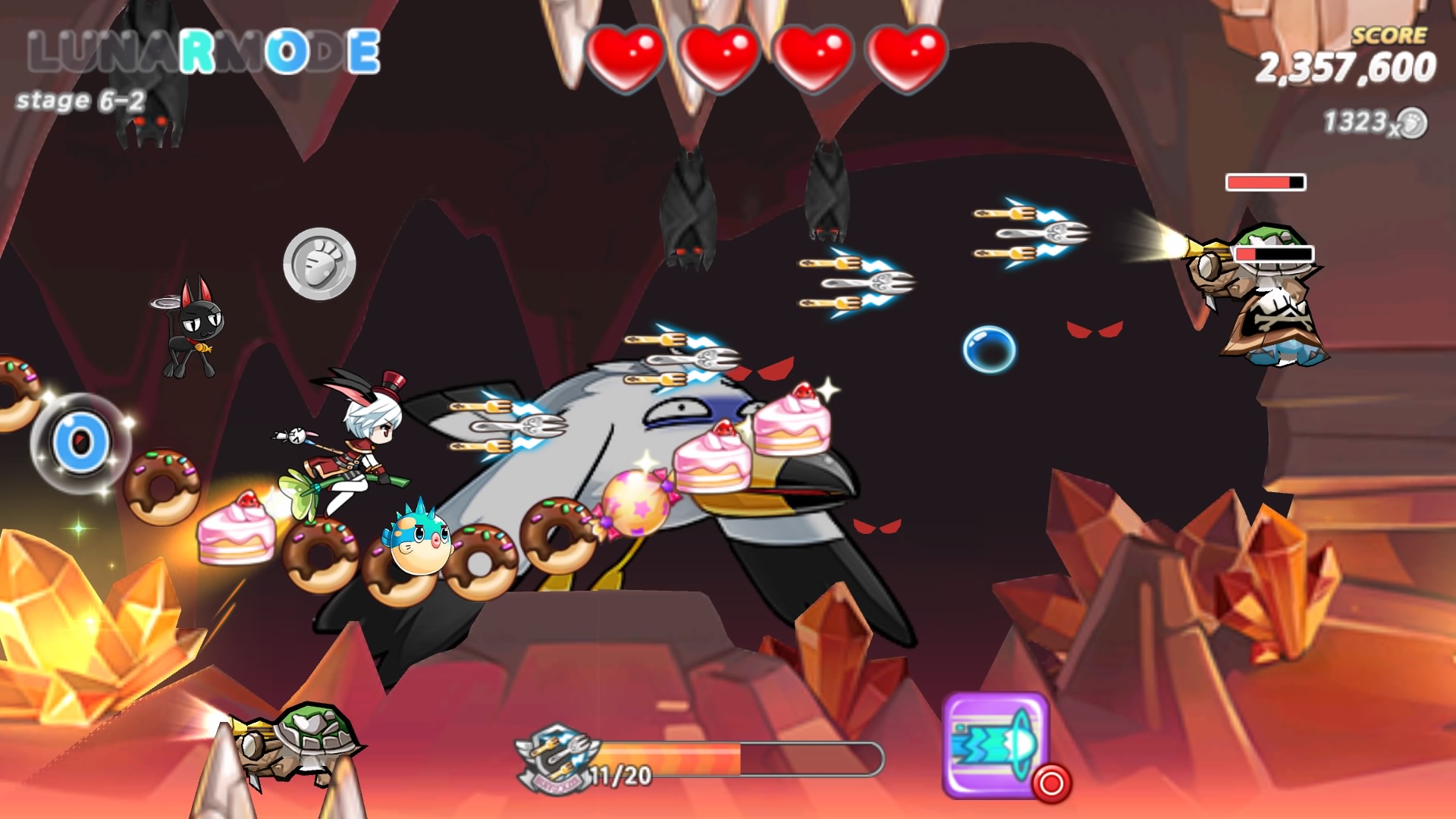 Flying Bunny, from its screenshots, may look like a side-scrolling shooter, it kind of is, but that masks the gameplay mechanic that is its strength, identity and, perhaps, its biggest weakness.  While you do travel from left to right shooting enemies that fly into view, you also have to control your movements Flappy Bird-style.

If you’re not familiar, Flappy Bird was a mobile sensation a few years back.  A game where you were constantly falling and tapped the screen to flap your wings and effectively jump up in order to avoid obstacles.  That’s the case here, as gravity pulls you down, pressing X lifts you up. 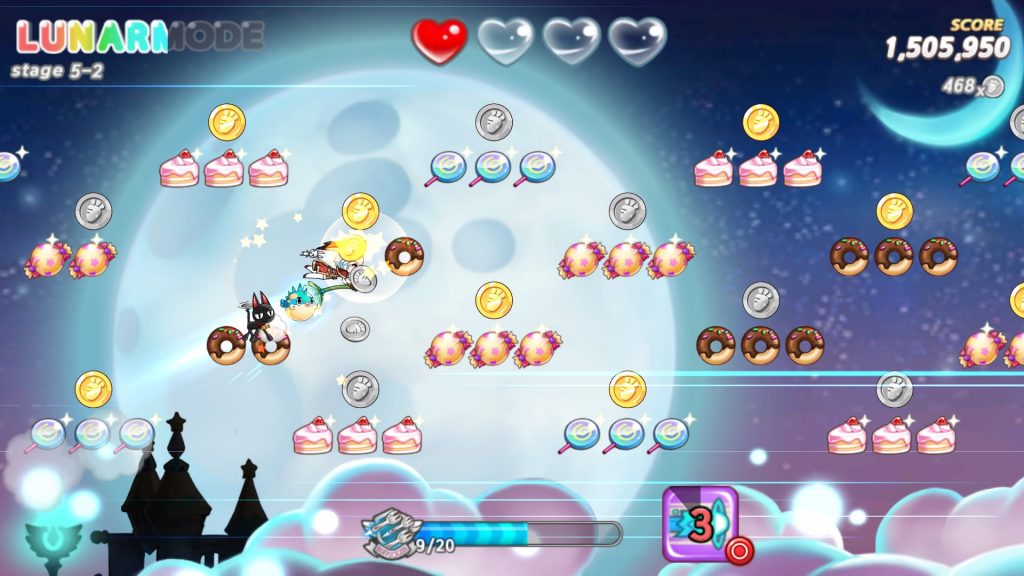 You are auto-firing and bouncing along, for want of a better word.  At first you can’t actually fire, you need to collect sweets and cakes to charge that up but that doesn’t take long.  Eventually you are balancing your attention between collecting sweets, coins and power ups and also trying to kill the various creatures (mostly turtles) that fly towards you.

It all moves at a good pace, the action is simple but enjoyable in some ways and the unlockable characters and supporting pets and abilities add some depth to the game too.  Add to that some very well-drawn cartoony graphics and a boisterous Katamari-esque theme and it’s all quite upbeat for a while. 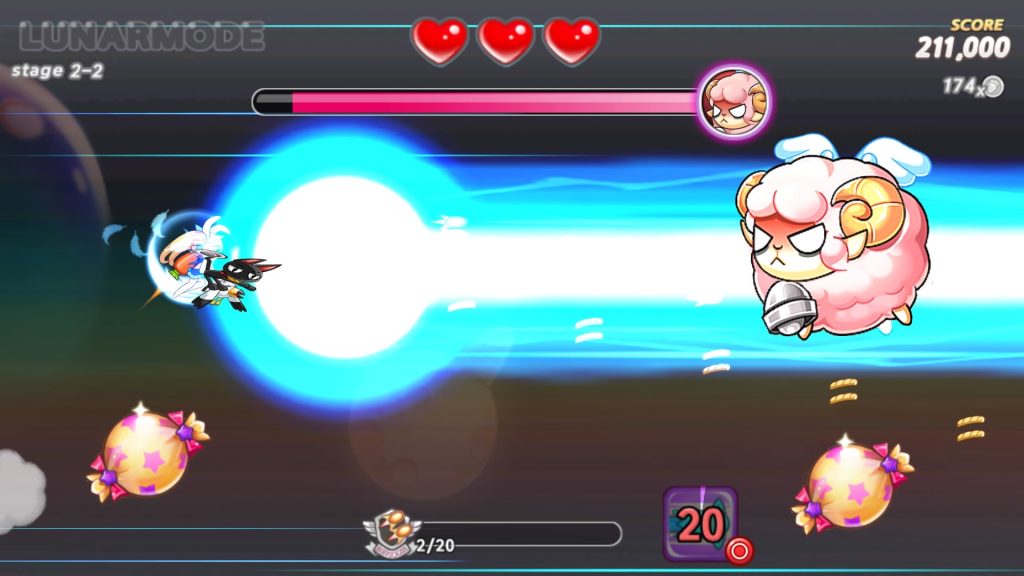 As you progress through the game the levels are punctuated by boss battles and these are fairly relaxed affairs compared to the bullet-hell shooters I’ve been playing recently but that’s not to say that the game doesn’t get tricky.  So at first it’s all nicely pitched but eventually the game gets more difficult and the control system doesn’t really support it very well, also with more enemies on the screen, the visuals become cluttered leading to some frustration.

In the end frustration does really hurt the game.  Be it the frustration of not being able to fall quickly enough to catch a passing power up or the frustration of dying at the same stage over and over, it can all take the fun out of it.  Of course, the answer there is ‘get good’ and it isn’t unsurmountable but whether or not you want to put in the time for a game like this, well, that’s going to be a hard sell for most people. 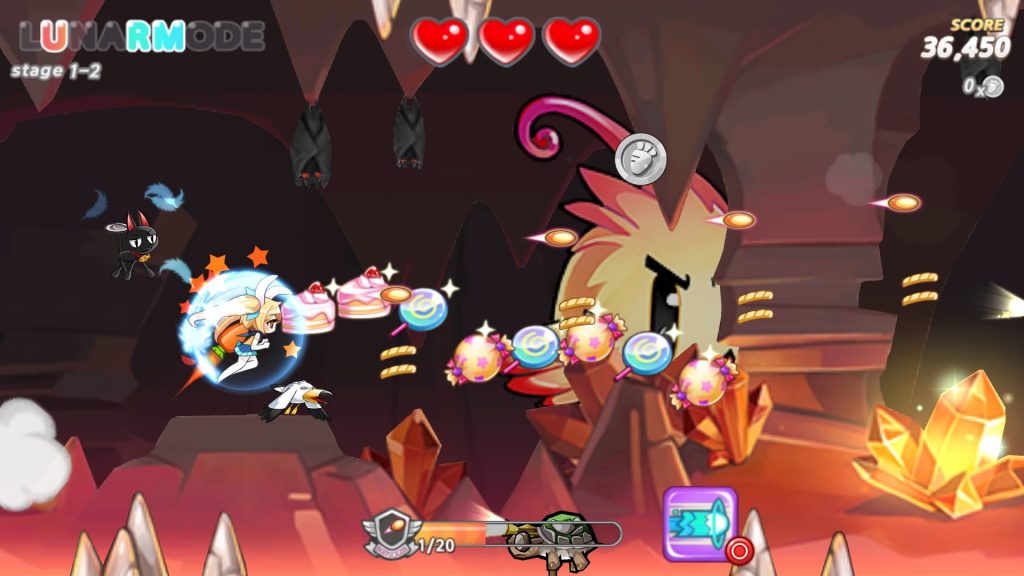 The simple charms of Flying Bunny, and its cheap price point (£6.49) might earn it some fans and that’s fair enough but casual players will be turned off by the difficulty and shoot ’em up fans by the controls.  So it’s hard to say who the audience for this game is.  Still, it’s kept me going for quite a few sessions now so it’s not all bad but it doesn’t really need the power of a PS4 to drive it.  It feels like a mobile game for the most part and that kind of sums it up as a whole.

Flying Bunny
5 Overall
Pros
+ Simple, fun gameplay
+ Good cartoony visuals
+ Some unlockables
Cons
- Flappy Bird controls aren't really that good
- Gets unenjoyably difficult
Summary
Flying Bunny brings a mix of shoot 'em up action and Flappy Bird trickiness to the PS4. While it plays like a mobile game, there is some simple arcadey fun to be had before the difficulty spikes and starts taking the fun out of it.