Old-school arcade genres are always popular with indie developers and so Crazyant games have teamed up with prolific PSN publishers Ratalaika Games to give us I Am The Hero which is a take on the side-scrolling beat ’em up genre and it is out now for PS4 and Vita as a cross-buy title.

You play as a generic hero who describes themselves as being a hero in various previous scenarios, giving the impression that they are just the hero in this one.  A token role in yet another game scenario and while the plot is possibly a little meta, it’s not focused on long enough to really make any difference and before long you’re in the game, looking at various instructions as you make your way through the game’s first level. 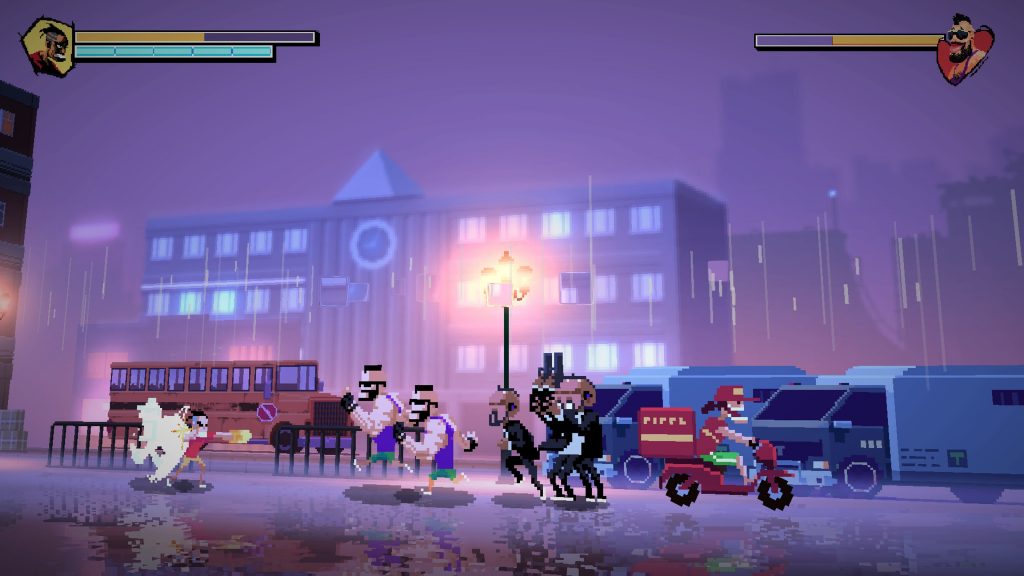 You’ll learn the basics.  You move with the left stick/d-pad, punch with

.   Combat is initially pretty simple and you’ll be dispatching fools reasonably easy (although they do take more damage than you might expect).  After a while you’ll start learning other moves.   Pressing up in combination with a punch acts as a launcher, while doing the same with a kick will make you do a rising jumping kick.

Eventually you’ll be able to combine these moves and then start launching further combos in the air, following your opponent all the way down and basically doing the sort of damage in one combo that they won’t easily walk away from.  Once you’ve got the basics down, you’ll rely on these combos more and more.   Of course, the game will start adding harder enemies who maybe you can’t launch or can unleash their own combos on you. 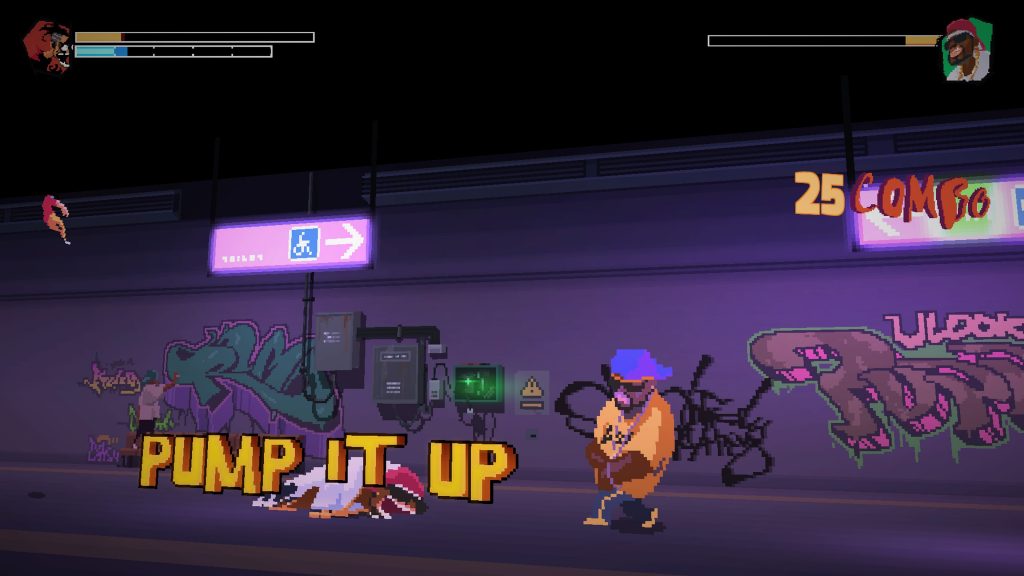 To keep the odds in your favour you’ll unlock new special moves that allow you to do massive damage to enemies, either singularly or in groups.  You can also unlock new characters who offer their own special moves too and you can pair up with one of these at a time and switch out tag-team style whenever you need to.  This also acts as an extra life which comes in handy although death isn’t do big of a deal here as when you do lose all your energy you’ll be able to restart from a recent, likely generous, checkpoint.

The game itself has six levels and it doesn’t overstay its welcome (something that plenty of so-called classic beat ’em ups suffer from).  Sure, bosses are recycled as you’d expect but it’s never in a hateful way and the progression through the game is reasonably smooth.  A late boss did give me a few headaches but I was able to deal with him after a while.  This was on the default Normal difficulty level and ultimately it’s safe to say that the challenge could have been more substantial.  Higher levels are available but trophy whores (the usual Ratalaika punters) will be glad to know you don’t need to play on them for the platinum. 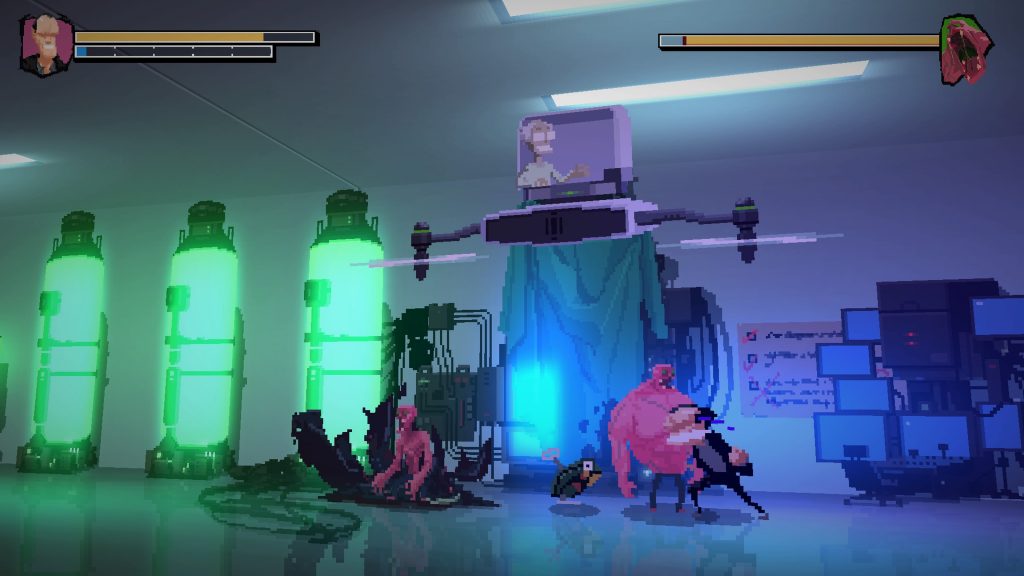 The combo system is definitely the best aspect to the gameplay but the special moves did add some more combat options and overall I enjoyed what the game threw at me.  The game does lack some common features such as weapons to pick up and power-ups which is a shame as it’d be nice to mix things up a little, likewise we weren’t surprised or thrilled by the fairly generic levels.  There’s even an elevator stage.  There’s ALWAYS an elevator stage in these things.

Visually the game is pretty interesting.  While the action is strictly 2D, it is presented in an interesting 2.5D pixelated style that gives it a fresher, modern feel than a flat version might have.  Also the visuals do have plenty of character.  The backdrops are pretty plain though but the action is cleanly presented throughout.  The game also has some boisterous retro music going on although we eventually turned it down because it can get a bit much. 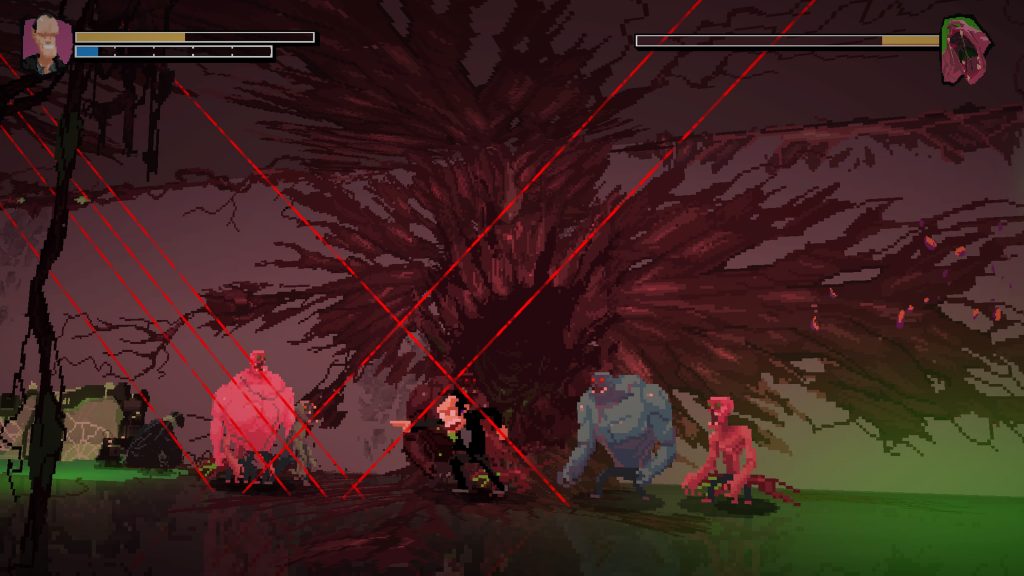 When you add in the Vita cross-buy and the local 2-player co-op options, this ends up being a reasonably good buy and unlike some of Ratalaika’s other games there is a bit of challenge here.  It’s still a pretty easy platinum but at least you have to finish the whole game and find some tricky collectables which stops this being a trivial max.

So, while it doesn’t do anything revolutionary, this old-school beat ’em delivers some solid gameplay thanks to its strong comboing system and the presentation keeps things interesting too.  I Am The Hero may not be an instant classic but it is good fun and worth a look for retro gamers and beat ’em up fans alike.

I Am The Hero
7 Overall
Pros
+ Good combo-based fighting
+ A fair challenge
+ Some unlockables
+ Just about the right length
+ Cross-buy
+ Good visual style
Cons
- No weapons or power-ups
- Lacking in original ideas
Summary
I Am The Hero isn't the best scrolling beat 'em up ever but it is well-presented, fun to play and gives you another reason to dust off the Vita too. We like it.