Back in 2015, we reviewed Dariusburst: Chronicle Saviours, which was the latest entry in the famed Darius series of horizontally-scrolling shoot ’em ups from Taito that dates back to 1987.  That game earned a solid 7 from us with our take away being that it was decently polished shoot ’em up but one that was weighed down by its own complexity and that it did very little to explain itself to newcomers.

Well, now they’ve released Dariusburst: Another Chronicle EX+ which is a very curious release indeed.  Before we explore why, we’ll explain what it is.  As with all the other games in the Darius series, Dariusburst is another shoot ’em up in the classic horizontally-scrolling style (thing R-Type or Nemesis as opposed to 1942).  And, as you’d expect, you pilot a small spaceship as you take on an alien army and several huge bosses.  Along the way you’ll pick up power-ups to upgrade your primary and secondary weapons as well as your shields.

Every shoot ’em up puts in its own twist on the classic formula though and Darius has more than just one.  The most noticeable thing about Darius has always been the game’s screen aspect.  With arcade entries designed for two and three screens, they’ve always had their action take place in a widescreen aspect.   That’s the case here with Dariusburst being designed with a 32:9 ratio.  That mimics the three-screen layout essentially.  Then you’ve also got the enemies which continue with the series’ mechanical fish boss designs.  And, of course, the game still uses the original red/green/blue upgrade system that the series has had since the start.  The other notable feature of any Darius game is that they are hard.  Like really hard.   More on that later. 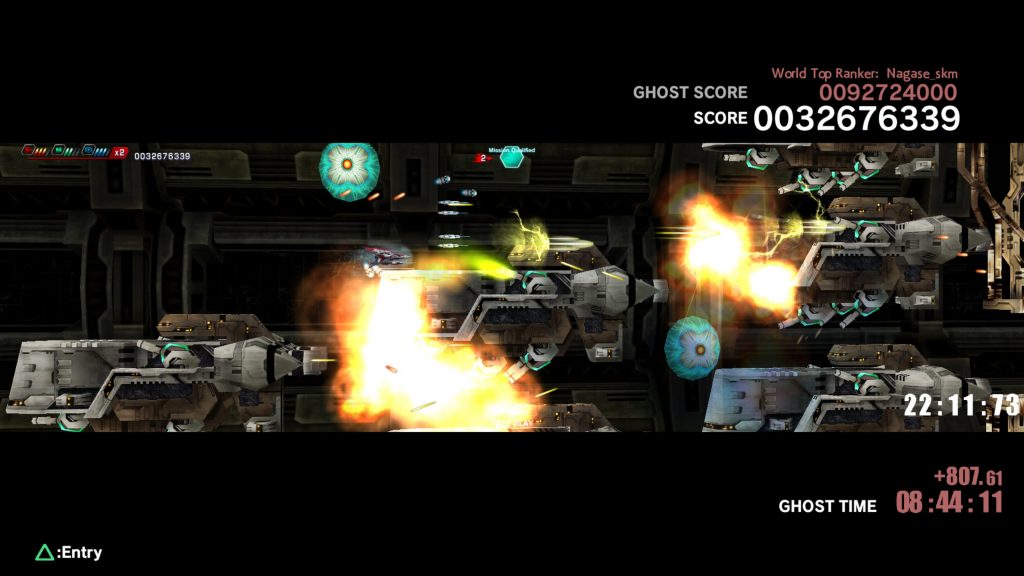 The gameplay on offer here is exactly the same as in the previous Dariusburst game.  You fly, you shoot, you fire off your burst weapon, you counter boss bursts with your own and you die a lot until you get good.  As before, the controls are precise and the action is slick.  Whatever it is that kills you in the game, it won’t be the controls.  The complexity comes from the various ship types available to you and how their weapons and burst technologies work.  None of this is explained though and so you’ll need to do your own research if you want to figure out which ship works best for you out of the nine on offer.

Another Chronicle EX+ offers four gameplay modes, but this is where it all gets a bit weird and, frankly, a little disappointing.   Original Mode is the most traditional as it offers a three stage arcade run with branching paths (another trademark of the series).  At the end of each stage you get to pick the next, going up for ‘easy’ and down for ‘hard’ each time until you reach the ending.  This gives you access to twelve stages (A-L) but with you only playing three at a time. 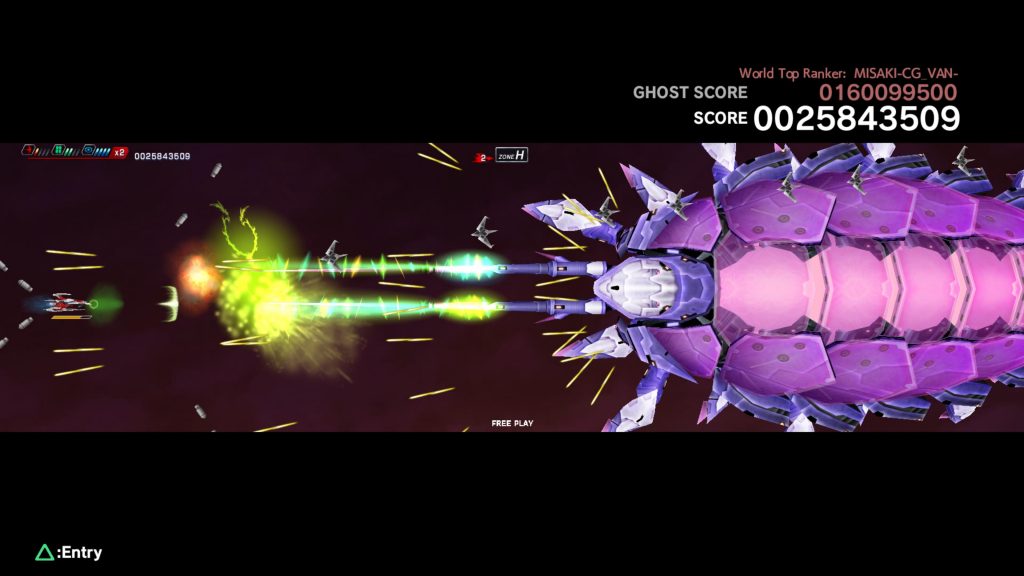 Original EX Mode is more of the same, giving you stages O-Z which are the hardest stages in the game.  However, difficulty increase aside, this plays much the same in so far as you shoot your way through each level, shooting small enemies (in large numbers) before facing off with one of the game’s monstrous fishy bosses.  The challenge is significant but the game does give you the option to have infinite lives, so you can just ‘content tourist’ your way through it all.  That said, the bosses can take ages to kill and without health bars to show the damage, it can all feel a bit fruitless until they eventually give up the ghost.

Next up is Chronicle Mode which is an interesting curio that sees you taking on planetary systems full of levels that you need to beat in an effort to clear the systems.  This is a joint effort with other players who are allocated to your server.  Essentially, it’s just a mix and match of levels and bosses though and ultimately it’s a little hard to see what the point of this mode’s structure is. 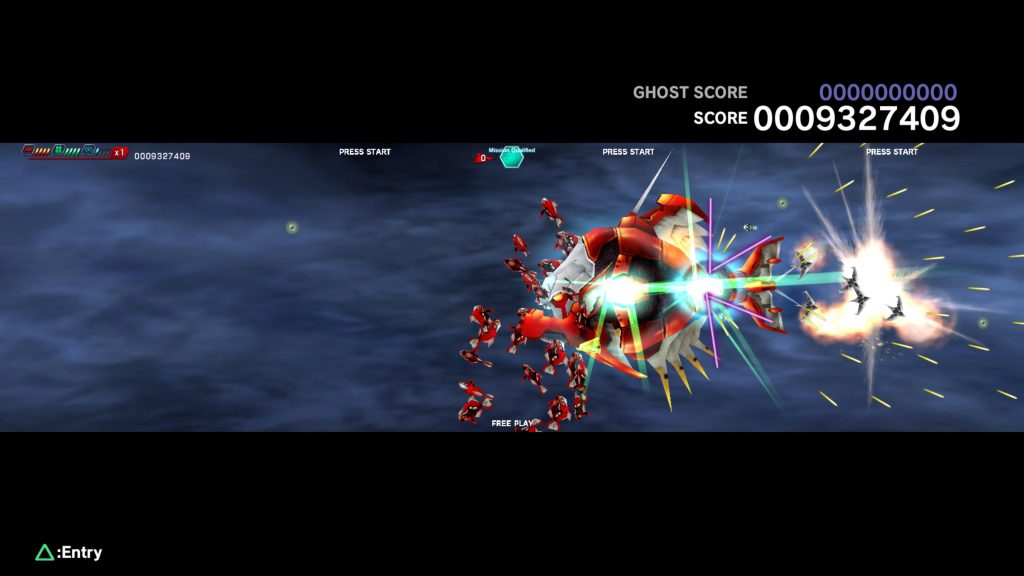 So, why is this disappointing?  Well, Dariusburst: Chronicle Saviours had all these modes already.  That game’s main menu was split between AC (Another Chronicle) and CS (Chronicle Saviour).  The AC part of that is basically what you get here.  Right down to the same menu system.  The only difference is that the ‘Event Mode’ option that was forever greyed out in the previous game is now a selectable option.  This mode offers 22 levels that were all timed events on the arcade version.  Again, these are just combinations of levels and bosses from the overall pool of combinations.  If you beat them (in one continue), they’ll be marked as complete on the stage select screen.  Otherwise you’ll need to try again.

However, as with Chronicle Mode, it’s hard to see what the point is beyond just giving you more levels to play through.  There’s no real reward for doing it, no unlockables in terms of ships or customisations.  Instead you’re just getting a bunch more standalone stages that don’t really add anything to the overall package.  But, of course, the real question is why wasn’t this just added to the previous release?  I mean, the option was right there and that game was a full price release, so it’d be fair enough to add more content.  Especially as Chronicle Saviours wasn’t shy about offering DLC. 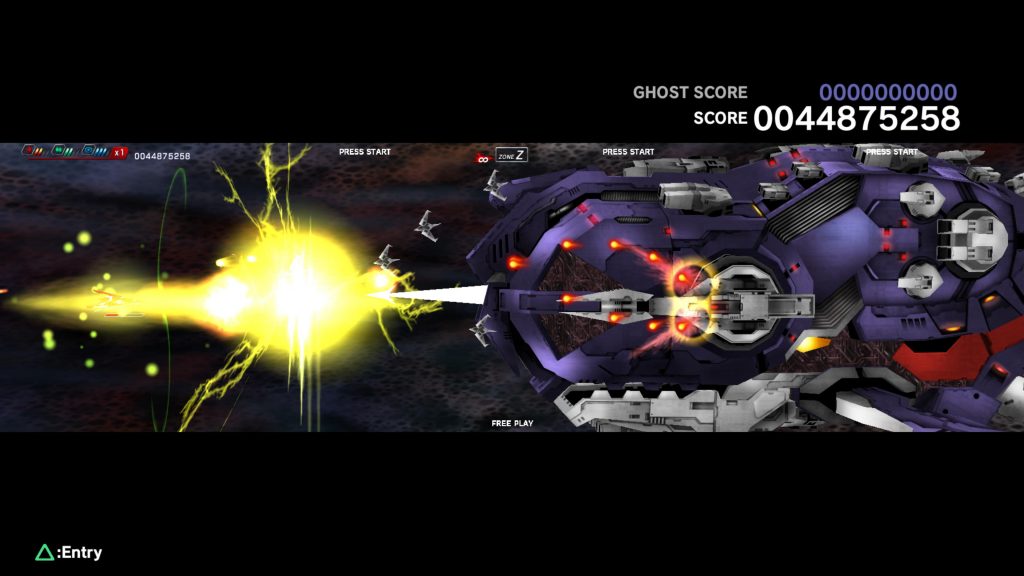 If anything, this release is more about the Switch version (Nintendo’s console never got Chronicle Saviours) and we’re just getting the PS4 port because of that.  But things get decided worse when you realise that while they’ve added Event Mode, that entire CS (Chronicle Saviour) mode is now gone.  Why does that matter?  Well, that mode in the previous game used a much more sensible aspect ratio, better designed for modern TVs, and had an interesting (if lengthy) campaign where your points could be spent on ship upgrades.  Sure, it was too long, too complicated and often too difficult but it felt way more at home on the PS4 than the AC mode did.  It looked better too.

Taking that out just seems a little mean-spirited but it’s removal also ends up being the most meaningful difference between Another Chronicle EX+ and Chronicle Saviours.  The newer game also allows you to use the Silver-Hawk Murakumo ship in all modes.  But that’s about it.  You also lose access to any DLC you bought for Chronicle Saviours and they’ve not included the museum mode either (which was a collection of concept art).  While the previous game still retails, on PSN, for £49.99, this version is a cheaper, but still pricey, £34.99 which isn’t great value for money.  If you own the previous game, there’s not much reason to buy this version. 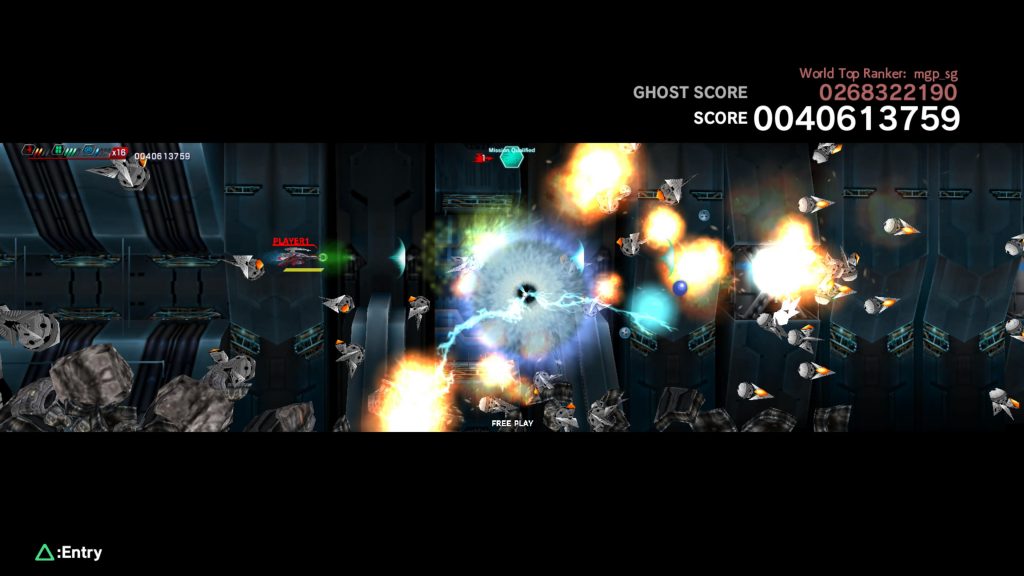 The presentation also takes a hit because of that 32:9 ratio.  With CS mode no longer an option, you’re stuck with just this ratio with its huge black borders.  Important ship information is relegated to a tiny corner of the actual play area too which is odd because the recent Cozmic Collections had some nice options for what info was displayed on the dead space of the screen.  You’ll want a big TV too but this adds to the compromise.  We played on a 65 inch TV which meant that the action was large enough to compensate for the reduced play area but it did show how basic some of the visuals are.  As ever, the boss designs are big and interesting but everything else looks a little bit generic and a tad underdeveloped with levels lacking any real character or sense of spectacle.

The music however is absolute madness with some huge pieces of music that have to be heard to be believed.  Quite how much they suit the action is up for debate but it sure does sound interesting.

So, overall it’s hard to know what the point of Another Chronicle EX+ is.  The Event Mode isn’t all that interesting and doesn’t add anything new to the core gameplay and what you lose in terms of the Chronicle Saviour mode (and the DLC) is a shame because that mode was the best thing about the previous game.  The presentation hasn’t been beefed up, the number of ships hasn’t been increased and they never addressed the previous game’s biggest issue, which was just how obtuse the whole thing was when it came to telling you how to really play the thing.  As such, we’re not sure why this one exists all.

Dariusburst: Another Chronicle EX+
6 Overall
Pros
+ Good controls
+ Solid shoot 'em up gameplay
+ Has depth
+ Big boss encounters
+ Killer music
Cons
- Doesn't add much to the series
- Has less worth than its predecessor
- Still doesn't explain itself to newbies
- Visually average
- Pricey for what you get
- Very repetitive
- Additional levels lack character
Summary
Dariusburst: Another Chronicle EX+ doesn't feel like a new game but rather just a cut-down version of the previous one. As such, the mid-range price point doesn't feel like great value for money and given how the game doesn't cater to newcomers very well, the audience it will really appeal to will be better off sticking to its predecessor instead.

One thought on “Dariusburst: Another Chronicle EX+ – PS4 Review”