It’s not very often I review something that’s already had a consensus form. Iron Galaxy’s latest venture is one of those cases. A game whose quality is at odds with its price tag, just what does Extinction have to offer? 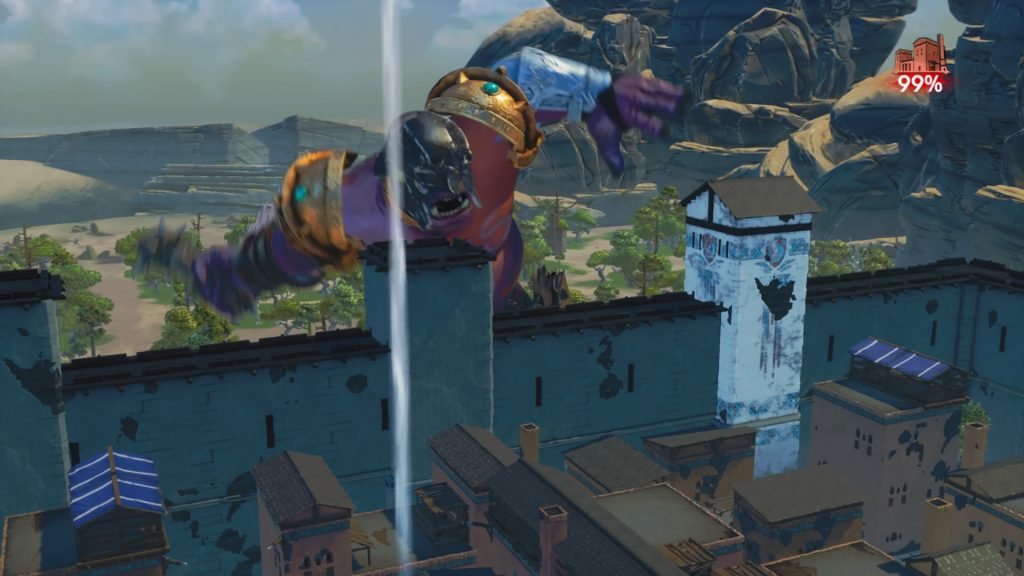 First things first, Extinction‘s inspirations are worn proudly with Attack on Titan providing a rather direct point of comparison. The plot focuses on humanity’s war with a race of gigantic orcs called Ravenii. Stakes are world-ending and only a handful of mythical Sentinels can provide salvation. You control Avil, a Sentinel in training as you climb and slice Ravenii limbs. It’s tough to treat Extinction on it’s own merits, particularly when the inspiration had an installment out a month ago. There are differences but the similarities are far more blatant than they perhaps should be.

Your hero comes equipped with a grappling hook a spritely jump and a sword. Combat is a single-button affair. Combos are available but not entirely necessary. Levels are populated by fodder enemies which are fought to build up your rune meter. They’re not a challenge to put down and rune strikes (a slow-motion attack achieved by holding R2) can extinguish them even quicker. Your meter can also be bolstered by rescuing survivors. Initially, this can be a chore with enemies spawning around the hotspots. Time has to be taken to clear the horde before beaming up refugees. 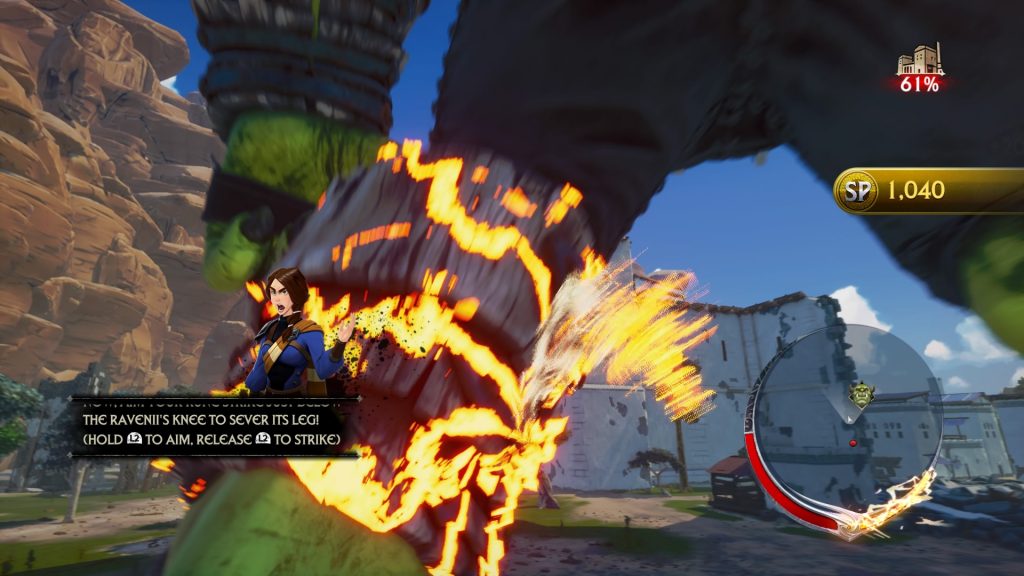 Once full, your run meter is used to exterminate the titanic Ravenii. At times, this feels methodical with armoured beasts requiring to have their limbs exposed before clambering in for the kill. You’re not quite multitasking to taxing levels but it’s nice to have multiple things to focus on. On top of this, an extinction meter counts down to zero as the big beasts wreck havoc. It can provide some urgency.

Missions in the campaign tend to alternate between a few types. Some focus on rescues, tower defence and battling Ravenii. It keeps things relatively fresh and missions do tend to only last a few minutes. They start to lose their sheen when random objectives are introduced. These missions play roulette with secondary objectives and environments. Unfortunately, they seem a little low energy with just the single sub mission to investigate. Whilst the level count does increase as you complete chapters, these random efforts feel like afterthoughts. Padding in a game that maybe is trying to justify your investment. 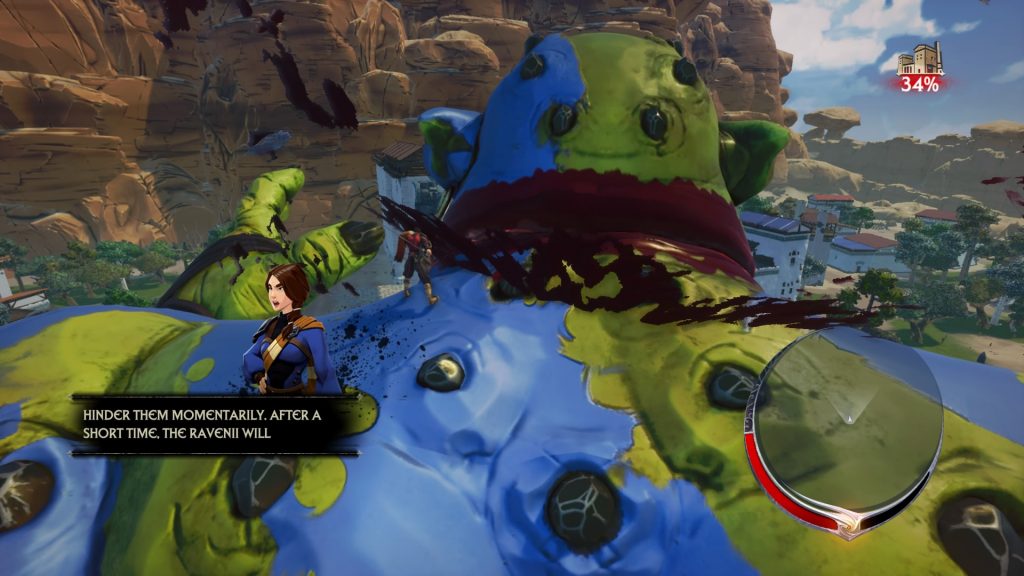 The bright visual style works well for the game’s handful of environments. Character design looks nice with the sunny aesthetics giving the world a cheery look, in spite of the dread of extinction. Unfortunately, the orcs don’t fare as well. They look very non-threatening. Coupled with the self-serious narrative, it feels at odds with itself. There’s not a lot of menace in Extinction‘s look. The story is presented in a fairly basic manner. Chapters culminate in a cheaply animated interlude and in-mission dialogue gets a portrait and text treatment. It all feels like the bare-minimum. It could all be ignored if the game was fine to play.

Traversal in Extinction isn’t tight or effective. You tend to spend the majority of your time at ground level with grapple points being sparingly littered around the map. It feels like a missed opportunity, especially when a few missions do offer some dedicated platforming. You can see in those levels a glimpse of what was intended. Sadly, it’s offered up all too fleetingly. Rooftops and towers are spread apart in a way that feels limiting.

Climbing Ravenii is a clumsy process and it’s a necessary evil as you try to expose weaknesses. They’re always a moving target so taking out their limbs can help stall them. Slowing down time with rune strikes does allow you moments to capitalise but they seem to react very well to your presence. It can all feel fiddly as you set your sights only for the big lug to begin swatting you down. I should also mention that you are very fragile. One stomp from an orc can put you out of action until you have levelled your health stocks. 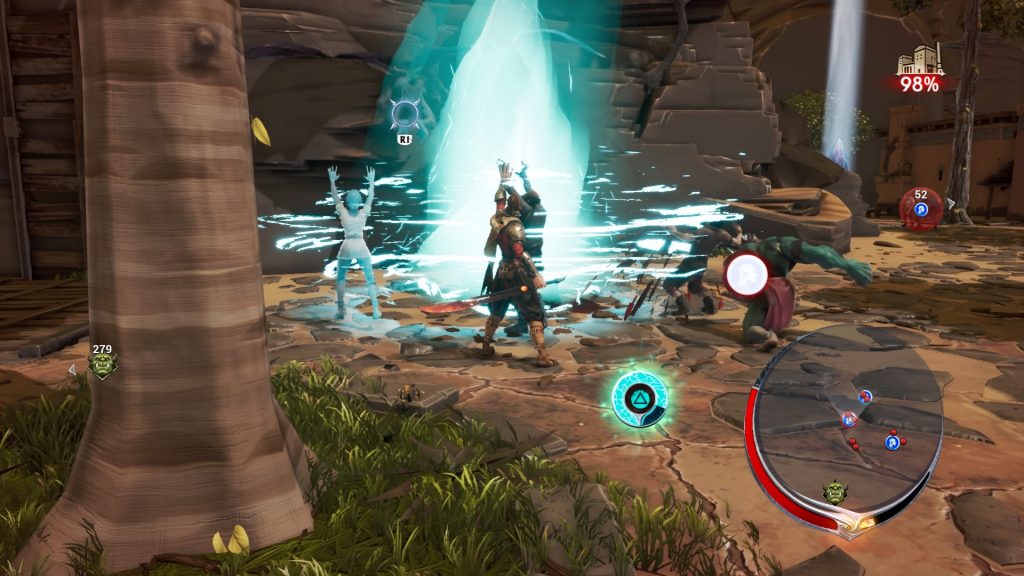 The ability to replay successful missions does grant you the opportunity to build up skill points. With these, you can train your sentinel up to become more effective in battle. Without it, this game might’ve felt a more difficult proposition. As it stands, it’s something you can ultimately persevere with. It’s tolerable at times, if not enjoyable. Daily challenges and skirmishes are also on offer but you’ll be encountering the same fundamental problems throughout.

Extinction feels to me like a game that doesn’t get going. Traversal rarely finds a chance to feel fluid and, whilst I enjoy the bright environments, they start to bleed together. Combat tries to give you combo opportunities that you simply don’t need to utlilise and the story is presented in such a slim manner it’s hard to feel invested.

Extinction
5 Overall
Pros
+ Bright visual aesthetic.
+ Missions do give you optional tasks to consider.
+ Traversal is interesting on the rare occasions the game gives it focus.
Cons
- Ravenii carry absolutely no menace.
- Some missions feel like genuine afterthoughts.
- Traversal and combat can feel genuinely bothersome.
- Missions become repetitive very quickly.
Summary
Extinction lacks a significant amount of execution and polish that could've seen an enjoyable game come to fruition. As it stands, you have a traversal system that doesn't have the environments on hand to really flow. Mission design starts to feel repetitive and, whilst you can find moments of joy in Extinction, it all feels smothered by design choices that don't gel.