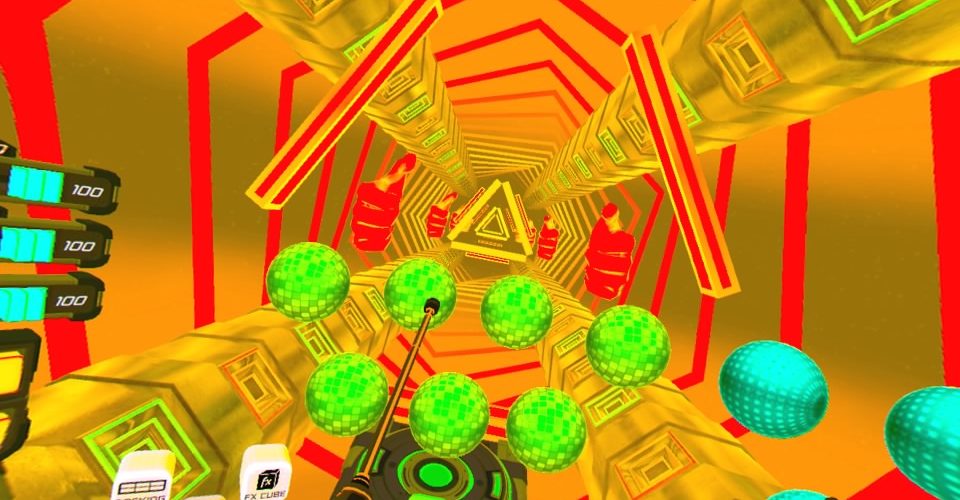 Survios have shown a lot of support to PSVR with Raw Data and Sprint Vector, games that have shown a willingness from the California devs to play with different genres. Electronauts  keeps the tradition going and is entirely different to what they’ve produced before and, one example aside, is pretty different to everything else that’s out there right now for PSVR.

So, let’s get it straight.  This isn’t a game.  Electronauts is marketed as a music creation tool and that’s mostly fair enough but is slightly overselling things a little there.  In the game (yes, yes, not a game), you play (okay you don’t play, but this is how reviews are written) as the titular Electronaut who is essentially a futuristic DJ in space.  You pick a tune from the selection of around fifty and are placed in a Rez-style neon level, flying ever onwards. 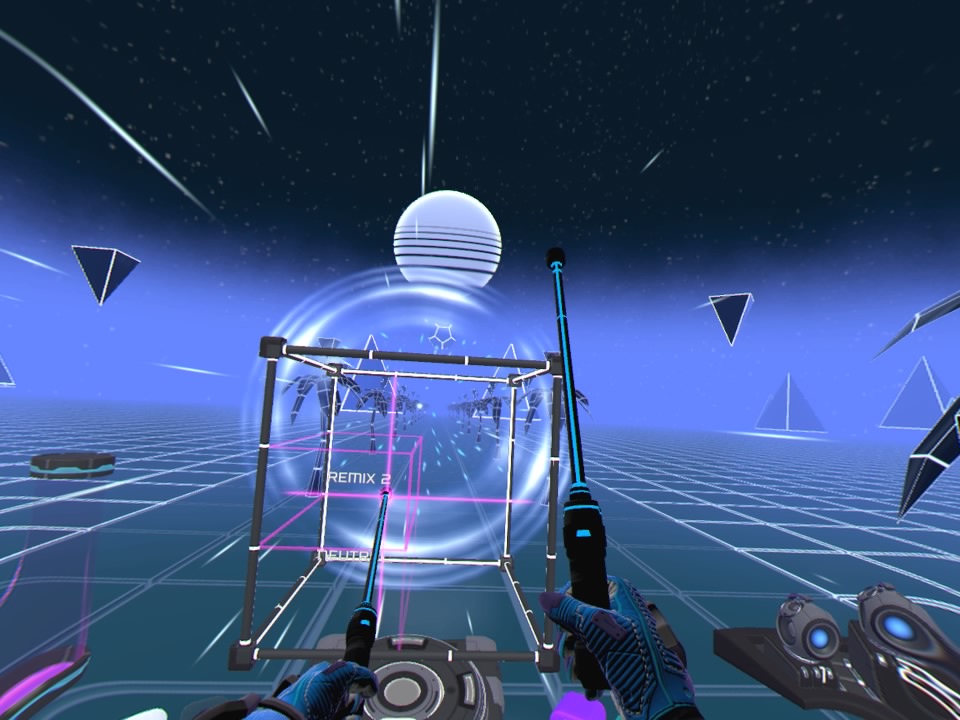 In front of you are three banks of equipment.  Each of these has a space for a cube which you pick up, using the mandatory Move controllers, and place in one of the consoles.  These then present various tools that you can use.  The most immediate are the instruments on offer, the commonest being the orbs.  Orbs float in front of you and when you hit them with the virtual drumsticks that represent your Move wands, they make sounds.  It’s quite strange drumming on these orbs but it really works well and when you’ve got two or three banks of them in front of you, you begin to feel like a cross between a ’70s stadium rock keyboard player and Jean-Michel Jarre.

Also available are a laser harp and a synth ball.  These are also directly interacted with using the drumsticks and these offer some great musical options although it’s such a shame that they aren’t available on the vast majority of tracks.  A bank of grenades is also on offer and these explode as notes when thrown.  Timing them perfectly is tricky but the music here is quantised, so you can’t really go off the beat too much.  The last instrument is a ‘looper’ but this is a tad more automated.  You just select the loop you want to hear, from a selection of five, and drag it upwards to make it heard. 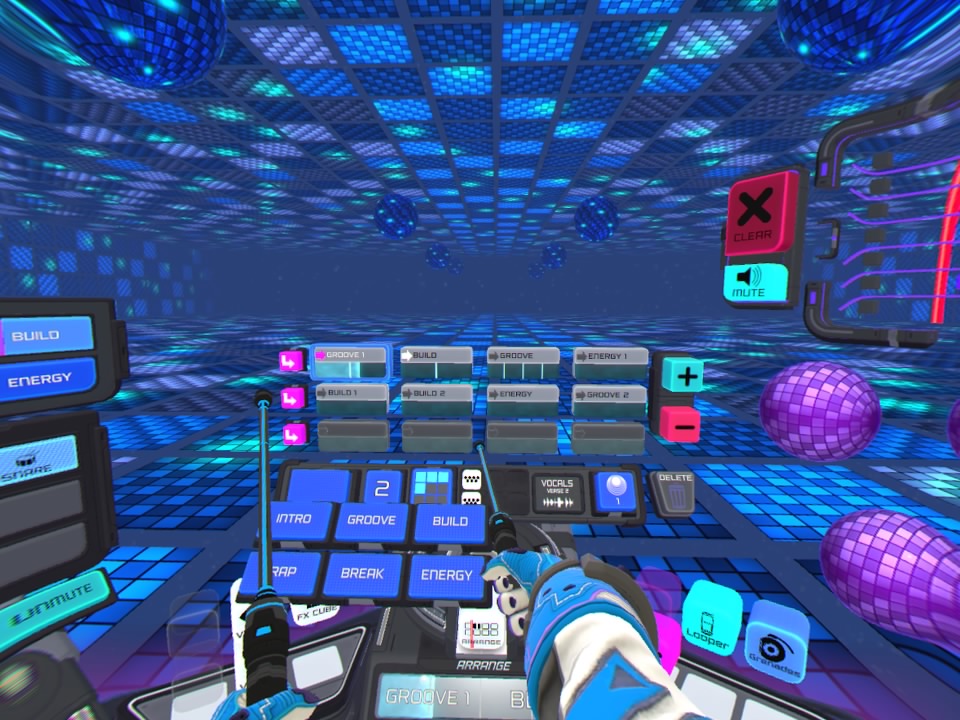 These tools all work well.  You can’t go too far wrong with them as they only offer a selection of notes that are already in key and there in lies the game’s strength and weakness.  At best, Electronauts is a fun, innovative music remixing program where you can’t go too far wrong, musically speaking, but detractors could easily describe it as a glorified visualiser.  The truth is somewhere in the middle.  In an effort to make things a bit more substantial, the game offers a sequencing module that lets you create full pieces of music however you are only picking from what that particular tune and level gives you as options.

Most tunes on offer have an intro, some sort of building up part, a main groove/verse, an outro and the all-important drop.  You can mess with each of these, muting and unmuting the various stems in each section, these being the kick drum, snare, bass and whatever other bits of music are in there.  Dropping the kick and snare and then bringing them back in always sounds good (there’s even a trophy for it) but real electronic musicians won’t believe the illusion of choice all that much. 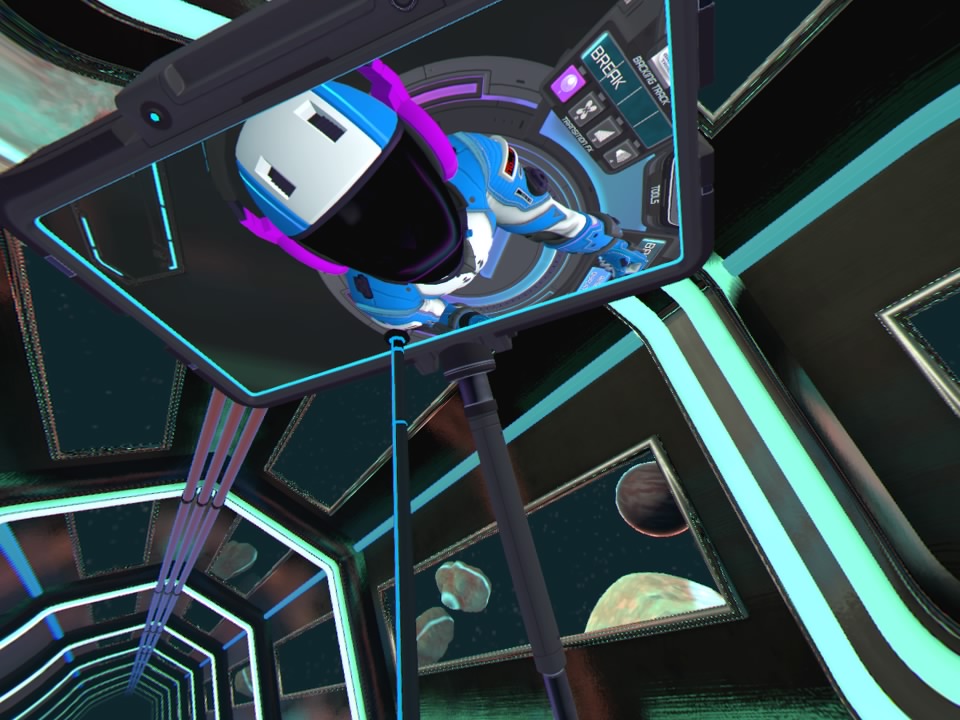 The last real element is the vocals.  The vocals are broken down into sections and you can play these in any order live, you can’t sequence them and save it in the same way that you can with the live instruments (orbs, harp and synth ball) though and that’s a shame unless you can and I’m missing something.  The tutorial only goes so far with the rest of the game being explained with text boxes that do make the initial learning period a little confusing.

When you put it all together though, Electronauts does offer quite a few ways to interact with the music and when you’re flying forward in virtual reality drumming away over your remix, it can feel pretty good.  There is a lot of music on offer to play with too with contributions from DJ Shadow and Del the Funky Homosapien.  You can pick by song, artist or genre and that’s where you get options of house, dubstep, hip hop and a whole lot more.  The synthwave tracks in particular work really well although I was pretty disappointed by what they call drum and bass.  The tracks were good but they weren’t drum and bass as I know it. 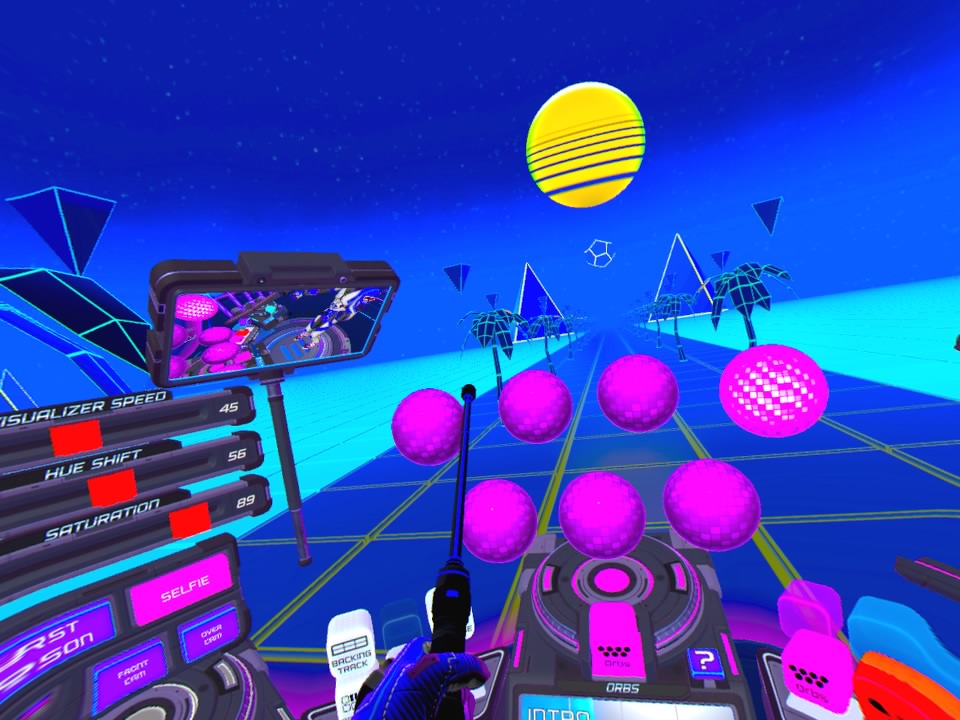 Visually the game looks good with a really nice colourful, futuristic style.   You can play around with the visuals a little in terms of the colour and hue of the backgrounds and there’s a fun selfie-camera to mess around with too but that’s really it.  The game is in VR (with no non-VR option) of course and looks good there but is lacking in terms of big 3D moments.  You could easily make a non-VR version of this but really the main thing here is the Move functionality and that’s probably why it’s a VR game.   Also, it was a shame to see that the visual themes are shared across tracks.  We’d have liked to see a bit more visual variation on that front.

Overall this isn’t really a game but is a fun visual tool, a bit like Harmonix VR.  Better in nearly every way but lacking the variation of that game.  As a music-creation tool, it’s not bad for something on a PS4 but it’s not a fully-fledged audio creation workstation or anything like that.  So in the end, we’re not 100% who the market is for this game but we’re glad to have had a play with it and are looking forward to dropping back in when new tunes are dropped.

Electronauts
7 Overall
Pros
+ Great selection of tracks
+ Live playing of instruments works really well
+ You can make some really nice remixes
+ Looks good
Cons
- Can be a bit confusing
- VR is a little unnecessary
- Instrument variety is lacking
- Harp and synth ball aren't available on most tracks
Summary
Electronauts is a fun musical and visual tool that might be a bit much for beginners and not enough for experienced musicians.