Dojoran is a “1bit platformer” from Brazilian one-man dev team Nautlander and is this week’s offering from Finnish publishers, Ratalaika Games.  Presented in stark black and white, is an unassuming looking platformer but one that will soon get your cursing thanks to its surprisingly aggressive difficulty curve.

You play as some sort of ninja frog and are tasked with beating each of the game’s relatively short twenty-eight levels.  That just means you need to get to the exit but in your way are plenty of obstacles and creatures that will send you back to the last checkpoint if you fall afoul of them.  You’d think being a ninja frog would give you a good degree of mobility and some fancy special moves but Dojoran doesn’t quite empower you that way. 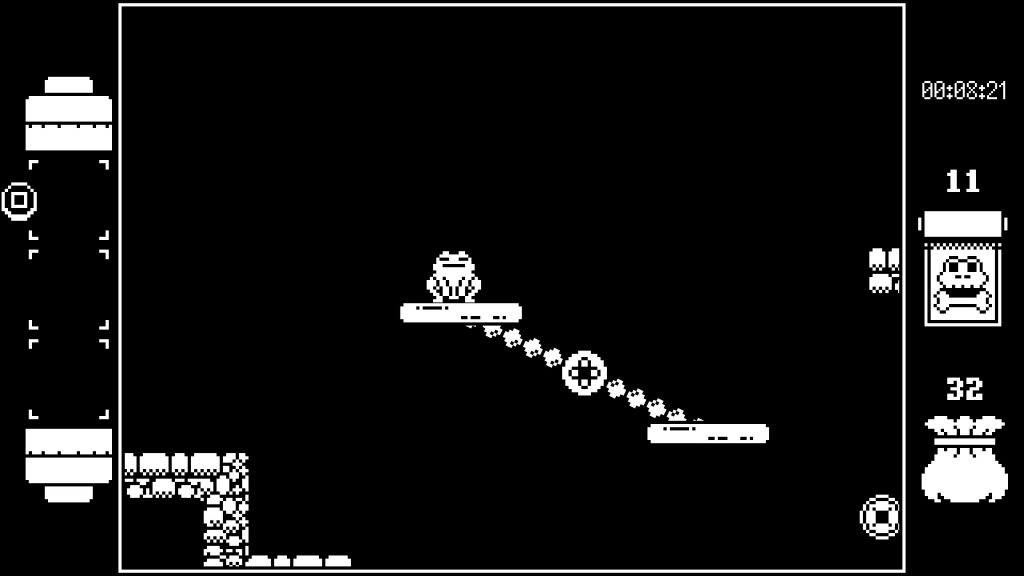 From the start of the game, all you can do is jump.  Along the way though you’ll find objects that will help you.  Apples give you a one-time only double jump, flies give you the ability to survive one death and each level also has one talisman, which is just a collectible.  As you’d expect, those handy apples really are just placed in readiness for the occasional extra long jump that you wouldn’t ordinarily be able to make, so it really just feels like part of the level rather than any kind of temporary upgrade.

As you’d expect you can also stick to walls (and wall jump) but that’s really it for this ninja frog.  But beyond that, everything just happens in combinations.  An enemy here, a spike trap there, a circular platform an Indiana Jones-esque rolling ball trap and so on.  You’ll see the same things over and over but combined in different ways and then you’ll die a lot until you can get to the next checkpoint.  There’s not much in the way of nuance to the controls.  This is just a one button game and your movement is pretty low on inertia.  Your ability to stick to walls does make some of the platforming fairly forgiving though. 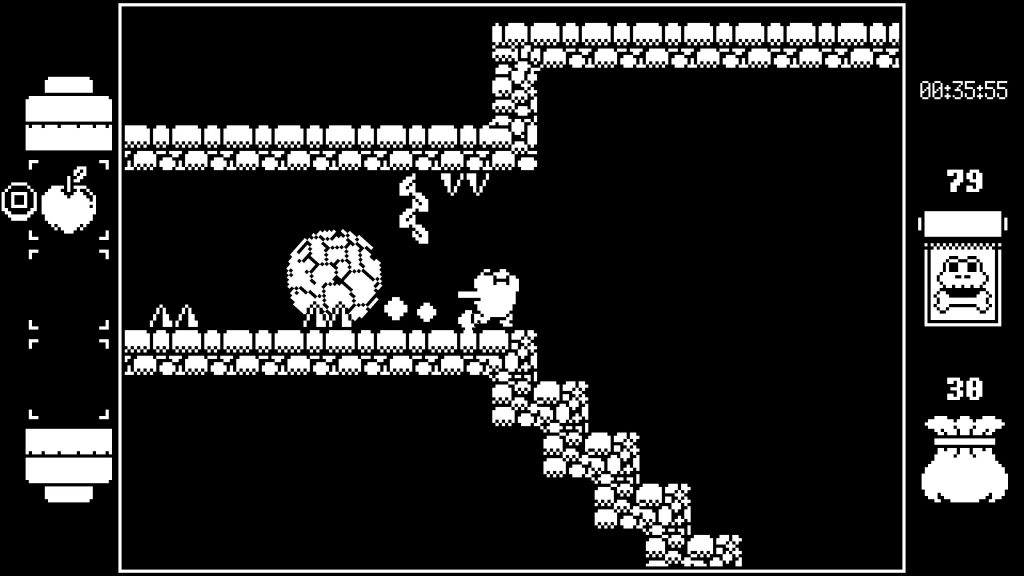 Dojoran can be frustrating, especially if there’s a lot going on between checkpoints but to its credit the gameplay mechanics are fair and the controls are tight enough that any mistakes are generally your fault.  That said, the camera doesn’t always do you many favours and you can find your next death coming from a leap of faith.  And look, we’re not saying this is some sort of Meat Boy platforming nightmare but the game does have a death counter for a reason.  Even if that reason is to let you know that you suck.

Of course, as a Ratalaika game, there’s that emphasis on an easy Platinum being available which is definitely at odds with the game’s difficulty.  In order to resolve that, you can really get it all done in just five levels, less than quarter of the game which feels like a bit of a cop out to us.   If you did have to beat the whole game for the Platinum, it might actually make things a bit more compelling. 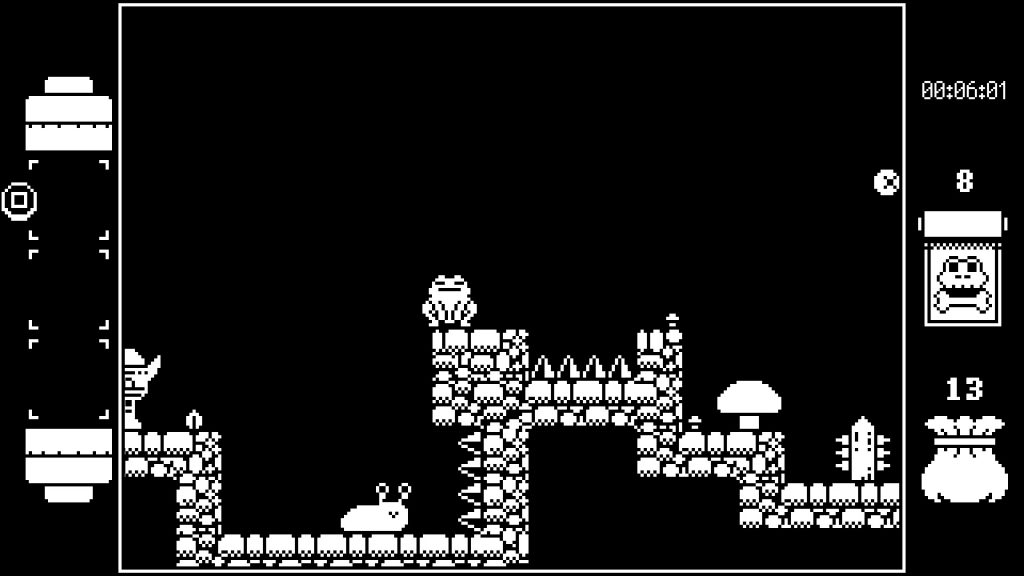 The real issue for us though is that the combination of the simplistic gameplay mechanics and even simpler presentation do make Dojoran feel a bit flat.  We see multiple 2D platformers hitting PSN every month, many from Ratalaika themselves, and we’re starting to see a bit more of this ‘1-bit’ style of game where you’ll get chunky pixel graphics with a monochrome colour scheme.  That might be a novelty for younger gamers but if you grew up with gaming in the early ’80s, you’ll remember a time where lots of games where monochrome (even going back to the old Space Invaders arcade game or the likes of Pong) and that was kind of disappointing back then.  So we’re not sure why such a feature is becoming popular again now.  Well, apart from the fact that it’s easy to do and gives one-person developers a chance to put out games.

That said, the animation on your frog can be slightly charming and we did quite enjoy the music in the game so the presentation isn’t all bad.

In the end we’re just not sure about this one.  It’s pretty good for a solo effort but it doesn’t have any flair or really an original idea to speak of.  It’s really just an entry level 2D platformer, the likes of which you’ll have seen time and time again.  But if you enjoy this type of game and a tough, but reasonable, challenge then Dojoran may well be the game for you.  It’s dirt cheap, and comes with an identical PS4 version if you want to double dip on those trophies, but it won’t turn any heads with its presentation or gameplay.

Dojoran
5 Overall
Pros
+ Tight platforming action
+ A substantial but mostly fair level of challenge
+ Reasonably good retro music
Cons
- Primitive presentation
- Basic gameplay
- Wholly lacking in originality
Summary
Dojoran is the latest 2D platformer to hit PSN and while we've seen it all before, it does have a reasonable level of challenge that will appeal to retro platformer fans.