Crisis Wing is an old-school, arcade-style vertically-scrolling shoot ’em up from one man coding crew Pieslice Productions and is published by Eastasiasoft who have been prolific in recent years when it comes to providing us with this type of shooter.

Inspired by the likes of Toaplan, a now defunct Japanese coin-op developer who were active from 1984 to 1994, this is very much an early ’90s style of game, a straightforward shoot ’em up in the classic style.  That means you play as a single ship, travelling ever upwards through seven levels full of alien ships as well as mid-bosses and, of course, end of level bosses. 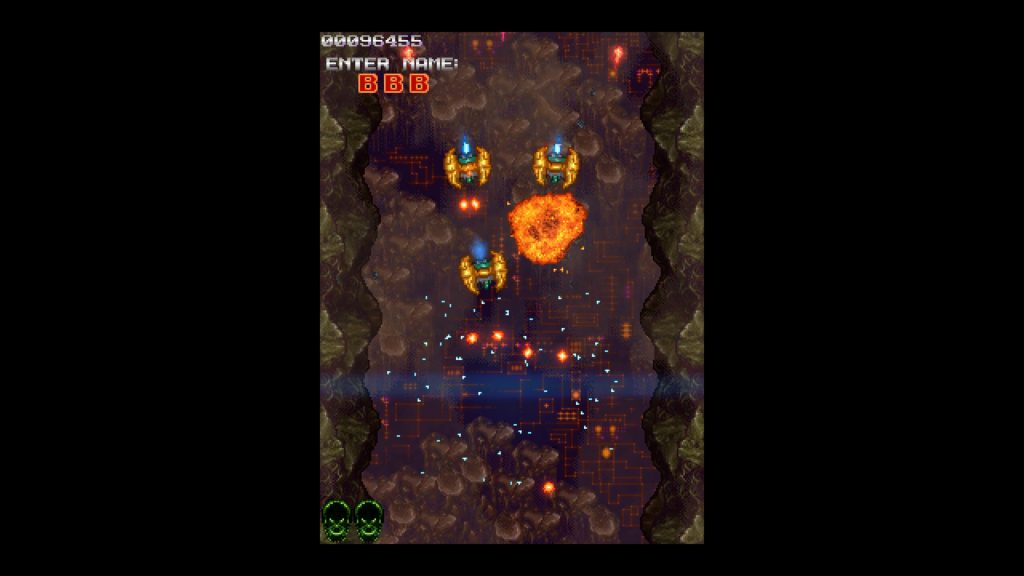 You control the action with the d-pad or left stick, while shooting with

.  Unlike other ’90s style shooters, shooting doesn’t slow you down and so you can just hold it down and forget about it.

So initially all you need to do is think about is moving and shooting.  Enemies will either shoot at you or possibly crash into you, so you need to keep moving and learn to take them out as quickly as possible before they start filling up the play area with unwanted pixels of doom.

Each of the game’s levels is split up into checkpoints, often (but not always) marked by a power-up capsule.  Destroy this and a little power-up icon will float down towards you offering you an upgrade of fire power. 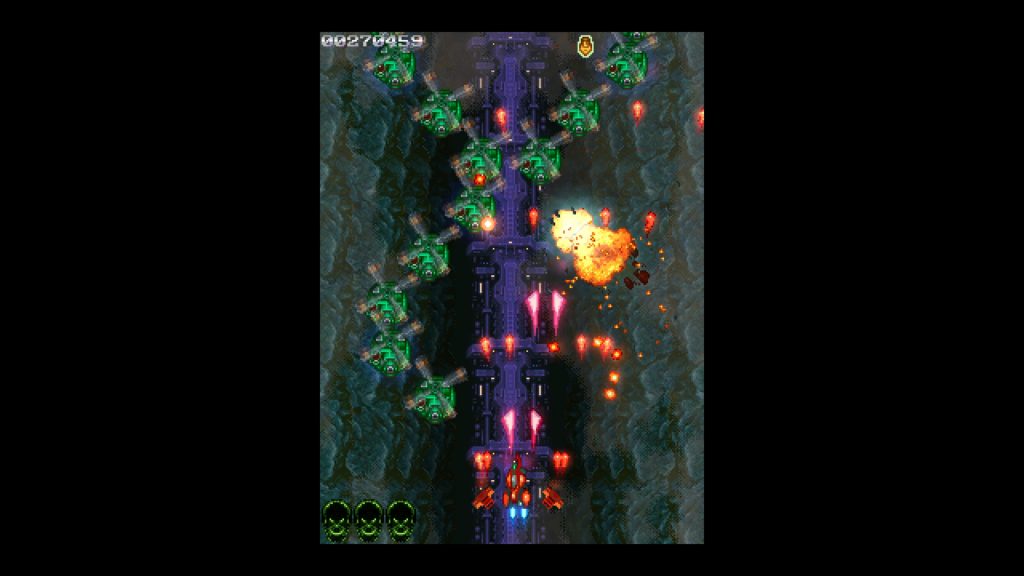 On the plus side, these cycle through three colours until you intercept it.  A red power up gives you a handy spread-fire while green gives you a wide shooting pattern.  Less handy is the blue one which fires off larger missiles but these are slower and less plentiful, meaning that they can feel underwhelming in battle.

Unfortunately, power-ups do no not stack.  So if you’re used to being able to build up your firepower R-Type style, you’re out of luck.  This is a shame because often the game will give you two, or sometimes even four, of these power-ups together but if you’re already rocking an upgraded weapon, then they will be useless to you.

Less often the power-up capsules will drop a spare smart bomb but it’s really random.  Sometimes you’ll get one when really all you want is an upgrade, other times you’ll get two or even four upgrades (all useless) and no bomb.  It feels like this could have been improved with a more intelligent solution. 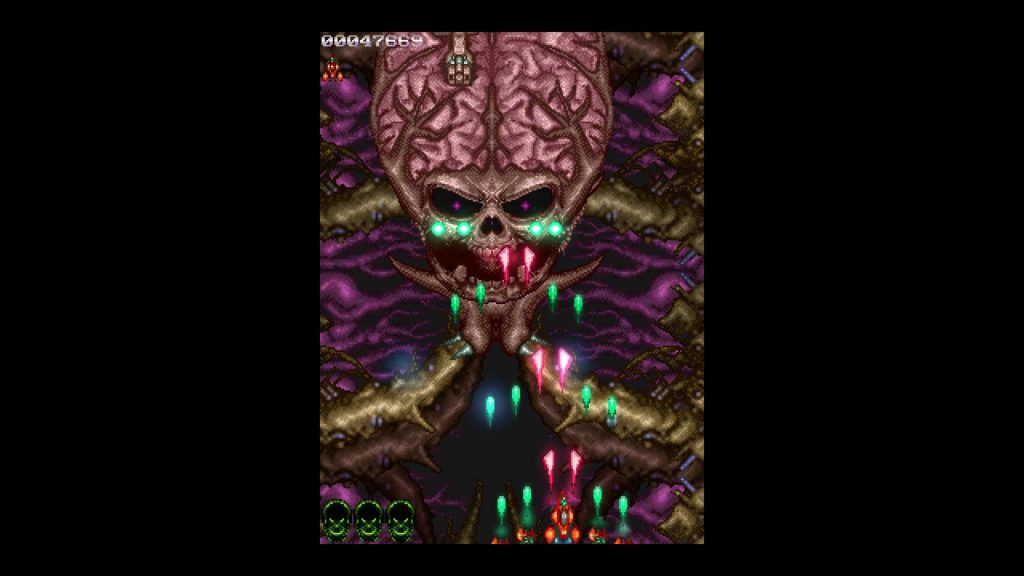 Anyway, when you’re upgraded and flying along blasting through enemies, Crisis Wing feels really nice to play.  There’s a good pace to it and when you’re wiping out swathes of enemies, it feels satisfying and empowering to play.

That won’t last forever though because Crisis Wing is tough.  Really tough.  Eventually you’ll face more enemies with multiple groups of enemies showing up together and fling out bullet patterns that seem nearly impossible to navigate safely.  This gives the game a bit of a random feel as though they’ve designed each group’s firepower but haven’t factored in how they’ll work simultaneously.

This isn’t helped by the fact that your slightly sluggish ship doesn’t match up very well to the speed of enemy bullets.  Later on in the game, bullets are a huge threat and will easily catch you unaware.  There are some boss battles in the game where they the boss will spit out bullets where you’ve got maybe a second to get out of the way, maybe less. 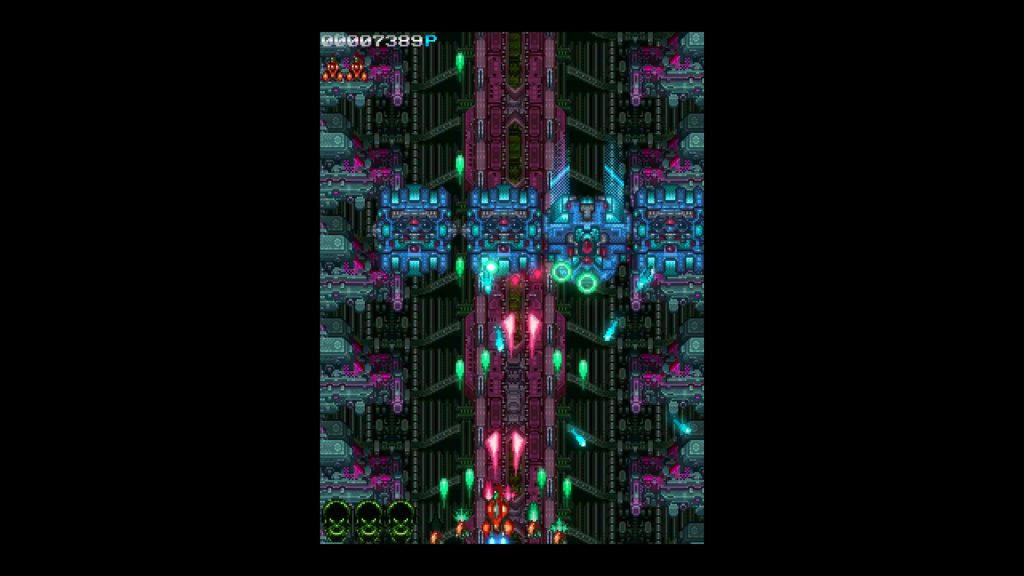 As such it can all feel a bit unfair at times.  This is particularly true of the last boss who immediately follows a very difficult boss battle.  Both will throw out immediately devastating bullet patterns and so comboing them without a checkpoint feels a little bit game-ruining.  Certainly it was the barrier to us completing the game’s main mode (although we did revisit in Practice Mode to see if it was indeed the final bit of the game).

Another issue is that the levels do drag on a bit.  Especially from level four where it just seemed to go on forever.  This is made worse when you are constantly losing and having to credit feed your way through it as you keep trying to reach that next checkpoint.  But there is some enjoyment from the challenge of getting to the next checkpoint, especially later on where that can be incredibly tricky to do.  What this does is break the game into small chunks and it’s quite a nice way to play.

The game looks and sounds good.  Each level has its own music and these are usually pretty high energy tunes.  They do often sound like commercial ’90s dance music but it’s different to the usual synthwave stuff that tends to accompany shoot ’em ups these days.  The visuals are nice and detailed with some lovely glowing pixels, giving a pretty solid coin-op look.  That said, they are let down by the backdrops which are just repeating patterns, this makes the levels harder to remember as there are no landmarks to remind you that a particularly tricky moment is coming up.  It all feels a little bit cheaply put together when shoot ’em ups do that.

But overall this is a fun shoot ’em up that’s cheap enough to take a punt on and it will appeal to hardcore shoot ’em up fans as long they don’t mind a few out of order difficulty spikes and some cut corners when it comes to the overall quality of the package.

Crisis Wing
7 Overall
Pros
+ Tight controls
+ Nice visuals and music
Cons
- Levels are quite non-descript
- Gameplay is unfair at times and designed for credit-munching rather than 1CCing
- Ship movement is a bit slow compared to the things being shot at you
Summary
Crisis Wing is a classy looking retro shoot 'em up but one that has signs of a few cut corners and can be a little unfair at times.