The ’80s was a golden age for arcade shoot ’em up games.  Many will remember the likes of Nemesis, R-Type, Salamander and many other franchises that took advantage of the decade’s fondness for games where a single spacecraft pilot would take on the alien hordes.  These games all had much in common but added their own twists on the genre.  Darius debuted in 1987 and was notable for two reasons.  Most notable was its three screen set up, giving the player and incredibly wide view of the playfield but also because the game’s enemies were mostly robotic fish.

Fans of the series can rejoice as Taito have no brought out two compilations:  one based on the original arcade titles and one based on the console versions.  This collection focuses on the home conversions of the Darius series which arrived on various consoles back in the early ’90s.  It offers nine titles although many of these are localised versions of each other.  Each one features a selection of modes such as time trials, score attacks and boss rush modes although these aren’t available to all of the games.  Each game also has an online leaderboard, quick saving (which you might need if you want to see the end of some of them) and options to redefine the controls, which includes the ability to autofire.

You can also edit the screen settings which includes options for smoothing and scanlines as well as various screen stretching options.  Of course none of these games supported multiple screens like their arcade counterparts, so you won’t need to worry about that.

This port of the original Darius is a solid version that offers a significant challenge.   It plays much like any game in the series but the play area does feel quite cramped thanks to the game’s large sprites and even larger bosses.  We struggled with this one and its inclusion is a little odd given that it is a cut down version of Super Darius, a port that was made for the PC Engine CD-ROM2.

Darius Alpha has a strange history.  It was produced as a bonus for Darius Plus owners and there were only ever 800 copies made.  This is essentially a boss rush version of Darius Plus, pitting you against that game’s 16 bosses.  This is just as savagely uncompromising but does have some value if you want to practise against the bosses before facing them in the other game. 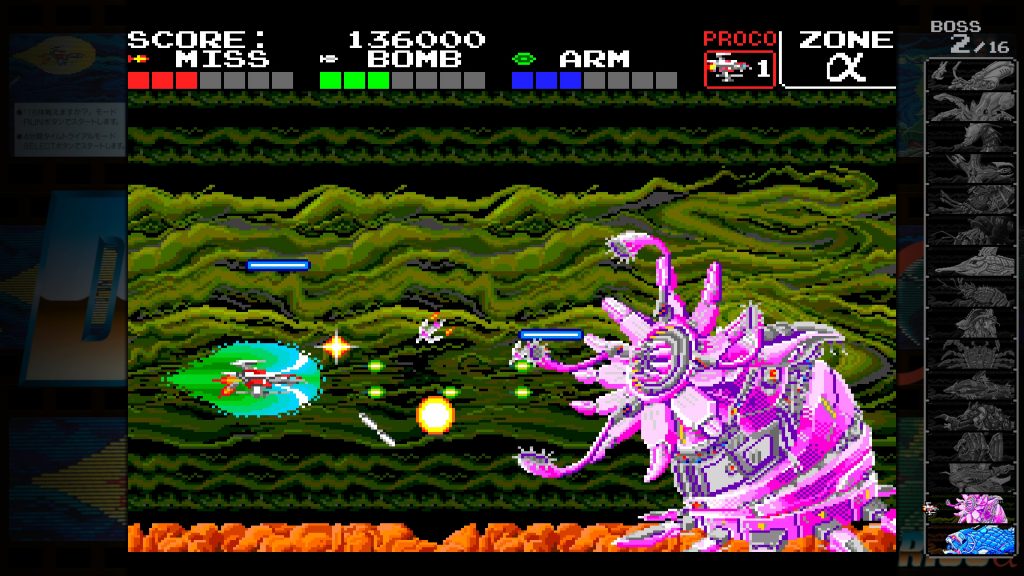 These two games are the Japanese and American ports of the same game.  These are redesigned conversions of the Darius II arcade game which was a two-screened affair..  However, this feels a lot less cramped than the PC Engine games.  Everything has a good level of polish (for a 16-bit game), the action feels smooth and the soundtrack is fantastic.

The game is significantly difficult so you’ll be quick saving a fair bit but there is a lot of fun to be had with this one.  That said, in its hardest moments you may be tempted to throw your PS4 in the bin.

The only downsides are that bosses don’t show damage all the much and so the battles with them can feel oddly unsatisfying (and very tough) and the levels lack a bit of character when compared to the likes of R-Type but with seven levels, each with branching routes (making 28 individual stages), there is a lot of game here. 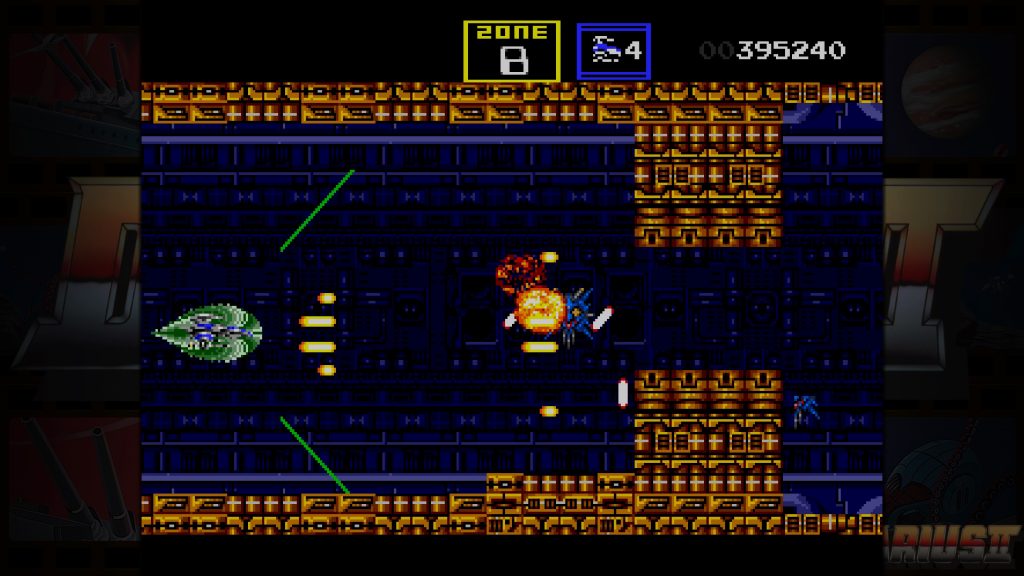 The Master System was the predecessor to the Megadrive and so this port of Darius II has a lot less to offer in terms of visuals and content but is here for completeness we guess.  Considering this is an 8-bit conversion, it is pretty good but with two better versions of the same game, this one feels a little unnecessary.  Also, your firepower feels a little lacking compared to the Megadrive version.

This game sticks to the same formula as the other games in this collection and is pretty similar to Darius II but has a few tweaks.  On the positive side, when you die you don’t lose your power-ups but the game does away with continues, making it pretty unforgiving.  Thankfully, all games on this collection have that quick save functionality and that’ll come in handy with this one.

Being a SNES game, the visuals are pretty good but the reduced level of branching levels combined with the fairly bland level designs make this easy to skip. 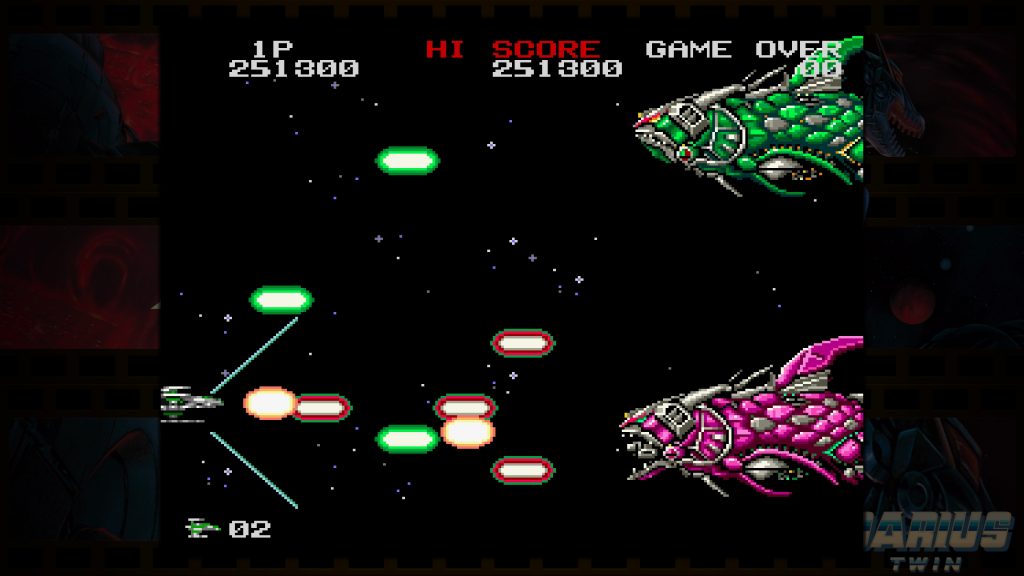 Darius Force has a couple of interesting ideas in that it lets you pick from three different ships at the start and splits the power between your forward guns and your bombs.  Given that the way to play the other games is to leave autofiring on and hold both buttons, this does make Darius Force pretty tricky and one for Darius experts only.  Especially when you factor in the harsh checkpointing system.

Visually the game doesn’t disappoint but by the time you get to it, you’ll have played a lot of similar games. 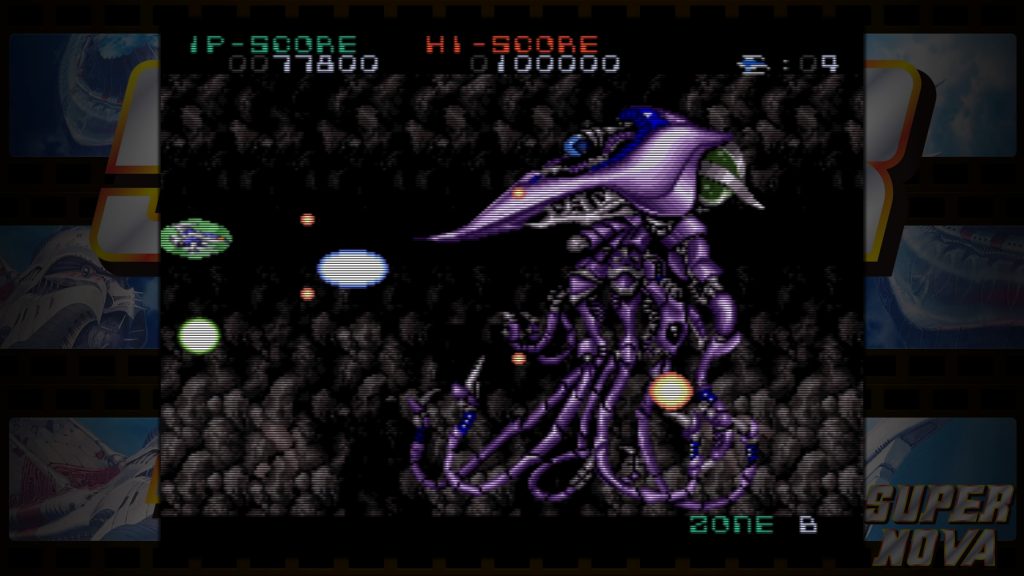 So when you really add it all up you are getting four unique games here out of a selection of nine.  Given this collection’s high asking price of £45, that’s over a tenner per game.  Even the trophy collection confirms the similarity of the games by allowing you to unlock the same trophies via either localisation of game (so you can get all the Darius II trophies in either the US or Japanese versions of the game).

Also, while it is nice for completionists to have the Master System version of Darius II, we can’t help wonder what the decision making process was that had them leave out the superb G-Darius (PS1) and Darius Burst (PSP).  When you realise how similar all these games are and then see that they are leaving out some of the more interesting games in the series, that makes the game seem even less of a bargain than before.

On that, we can’t help wonder why the games on the Arcade compilation aren’t on here as well.  We’re pretty sure that game ROMs that are just a few hundred megabytes could easily be accommodated here rather than almost doubling the cost of fans by making this two separate releases.

That said, the games that are included here have been treated well.  The additional gameplay modes add value and we’re happy to see some leaderboard action (although the experts out there have already put up some untouchable scores) but as far as compilations go, this isn’t as generous as it could be and we’d like to have seen some concept art and more historical information too.

It goes without saying that old-school Darius fans will be pretty happy with this and retro shoot ’em up fans should be too (although we still prefer the likes of R-Type 3 and R-Type Leo) but this compilation does feel like a slightly wasted opportunity to make something really special.  Players new to the series may struggle with the sometimes absurd difficulty of these games (and occasional issues with being able to distinguish the bullets from the backgrounds) but if you want a whole heap of retro shoot ’em up action, this is one of your best bets.

Darius Cozmic Collection Console
7 Overall
Pros
+ Good options for each game
+ Additional modes are welcome
+ Offers a lot of shoot 'em up action
+ Some interesting games are included
Cons
- Very pricey for what you get
- Lots of repetition between titles
- Missing some key titles
- Arcade titles could have been included
- The games are sometimes prohibitively difficult
- Bullets can get lost in the backgrounds on all titles
Summary
This compilation of classic '90s shoot 'em ups is great for fans of the series and genre alike but while the game needlessly focuses on regional variations of the same games, it misses out important titles from the series and the cost is a little bit too much for what you get.