We very recently reviewed Darius Cozmic Collection Console which is a compilation of home conversions of the various Darius arcade games.  Now any kid of the ’80s and ’90s knows that home conversions of arcade games rarely lived up to the originals, although this did get better when the 16-bit consoles came in but it was even trickier for these games as the Darius arcade titles had multi-screen layouts, making them entirely unsuitable for home users (especially as most gamers back then had small CRT televisions with a 4:3 ratio.

Having just reviewed that collection, we came away thinking it was a pretty good compilation of shoot ’em ups but one that was let down by a lack of variety (many of the games on there were basically copies of each other with minor differences) and big, chunky graphics that didn’t really help when it came to confidently navigating your way through enemy attacks.

Well now we’re looking at Darius Cozmic Collection Arcade which gives us ports of some of the original Darius coin-ops.  As with the other pack, we also get less variation here than the game list might suggest with the seven games in the menu ultimately just being three unique titles but with various localisation and tweaks. 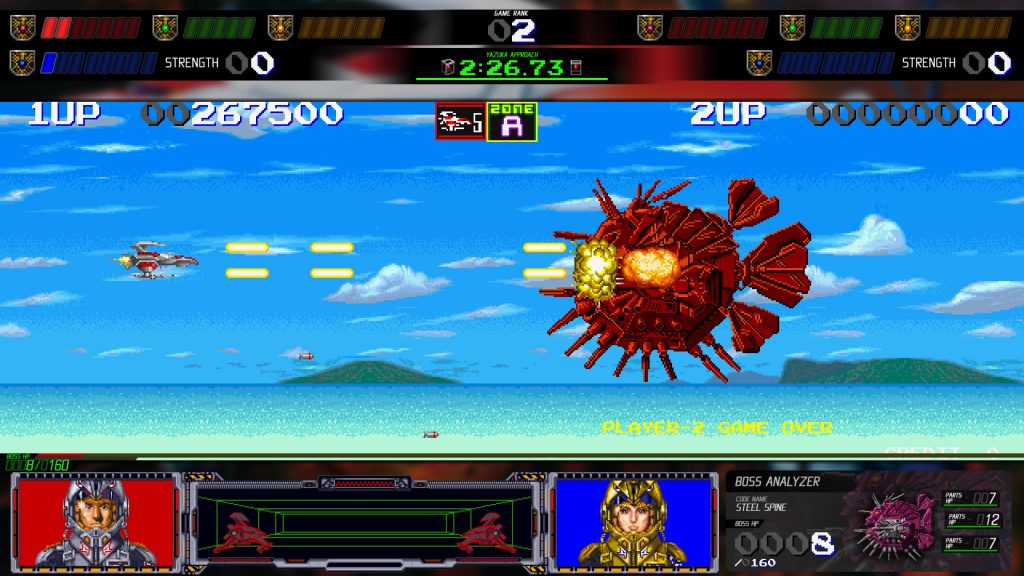 For the uninitiated, these are horizontally-scrolling shoot ’em ups.   You pilot a lone spaceship (or two in the games that support co-op) and take on an army of robotic fish.  As you blast your way through the stages, you’ll grab coloured orbs that upgrade your weapons and shields, making you more formidable as you go along and you can tailor your level of challenge by choosing branching routes that give you hard and even harder stages to choose from.

Yes, like most shoot ’em ups of the era, the Darius games offer a very stiff challenge with enemies that’ll cheap shot you from every direction and bosses that can absorb a lot of punishment while dishing out certain death to anyone who doesn’t pick up their patterns right away.

The original 1987 Darius title was a three screen monster which introduced the world to the series and all of its mechanical fish based destruction.  The three versions of the game here all play much the same but with tweaks to difficulty settings, particular in regards to boss battles.  The ‘New’ version seems to be the most accessible and it looks and plays great.  The three screen layout means that the game is played out in a letterbox format but if you have a TV big enough, it’ll be fine.  Make sure to pick the screen option that makes it use the full width of your screen though (‘Fit to Screen’).

You can also fill up the non-gameplay space with addition information including the arcade instruction panel and various indicators that are nice to have such as weapon information and a stage map.  It’s all pretty superficial but improves the experience a little.

Compared to the console versions of this game (on the PC Engine), this looks so much better and the widescreen layout makes it better to play too.  We were really enjoying this one a lot but have to admit that some of the later boss battles were entirely joyless and did spoil the game somewhat.   Following the easy branching path, the fourth boss was basically impossible to beat for example.  Even with quick saving the whole battle was awful.  The sort of difficulty spike put in by arcade developers to keep the quarters flowing.  And from that point things didn’t really get better.  It’s a real shame because there is a great game in there but one that would benefit from the original Taito staff chilling the fuck out for a minute. 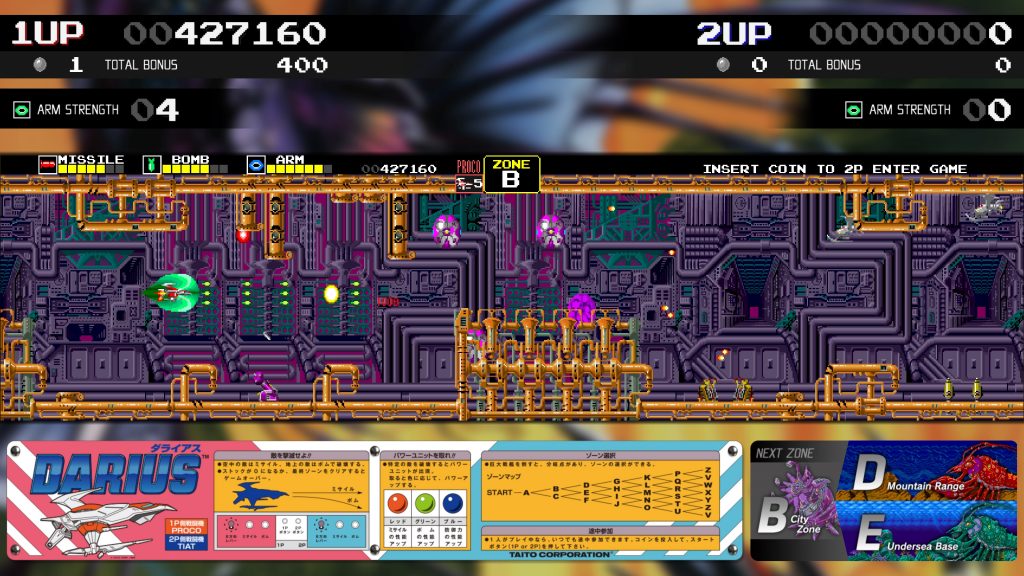 Darius II was one of the highlights of the console compilation of games and much like Darius, the versions here are by far the best ones.  This game was a two-screen affair in the arcades which means it translates even better to home screens with a less dramatic letterbox aspect.  Visually the game is even better than its predecessor and plays even better too.  The action is closer up thanks to it just being a two-screener originally and the action is silky smooth compared to its home counterparts.

As with Darius, it does still come with its share of rough difficulty spikes but is nowhere near as bad as Darius and so this really is the better game and arguably the best on the compilation. 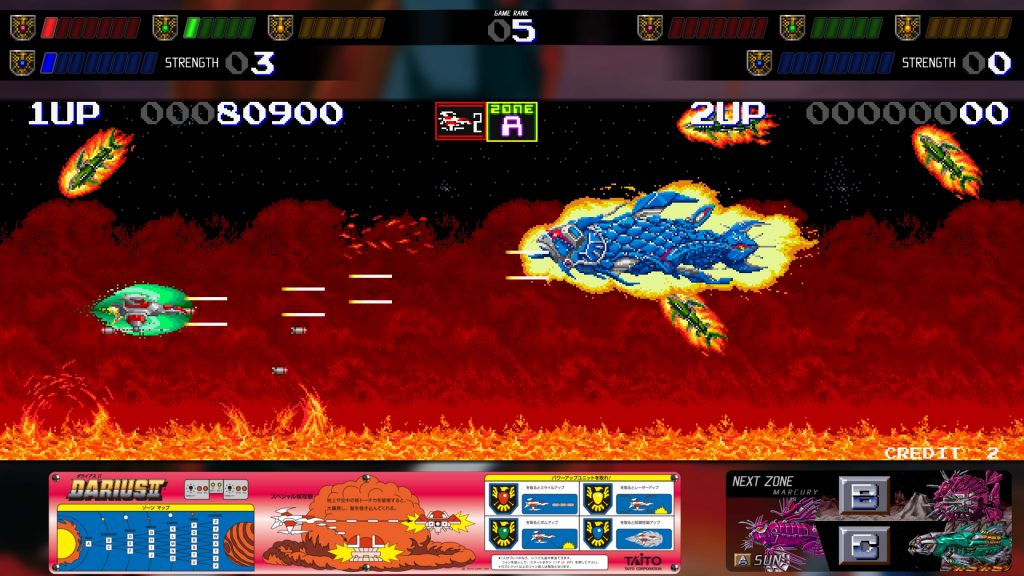 Darius Gaiden was the third in the series of arcade games and was the first to be designed for just one screen, making it a lot more convenient for home users who got a port during the Saturn/PS1 era.  It’s a solid entry into the series that combines everything people liked about Darius with some newer gameplay elements such as the ability to capture mid-stage bosses to use as extra firepower and a screen-clearing bomb.

While it is more suited home TVs, we actually preferred the long, letterbox format of Darius and Darius 2.    But the graphics did feel like an exciting step up here in terms of being bigger and with good use of scaling effects to have things swoop into the screen.

The game is still pretty challenging but you do feel better equipped than ever to meet that challenge thanks to some pretty chunky firepower being at your disposal.  As with the other two games, the upgrades seem to go on forever and that does help the game feel pretty satisfying. 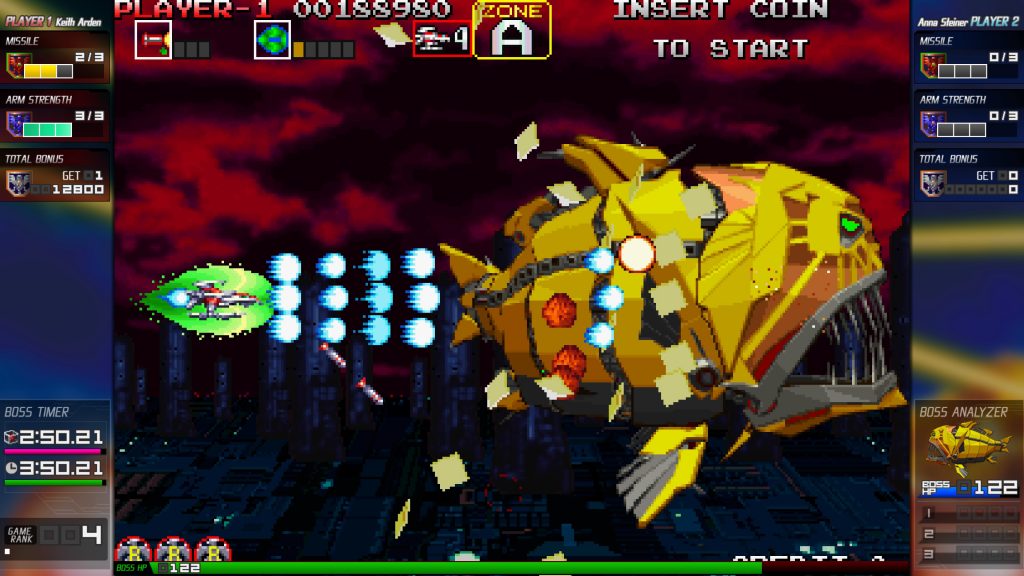 As with the console version of this compilation, G-Darius is a noticeable admission and that is a shame given that it is maybe the best game in the series.  Also, it feels like a stupid decision when you’ve got three versions of Darius II on here.  That also helps make the high asking price of this compilation a little bit more egregious than it could have been.  But the good news here is that all three included games are treated well in terms of those additional on-screen displays and the inclusion of quick saving on all games is welcome too (especially as it doesn’t disable trophies).

But with just three unique games, we can’t help feel annoyed that they didn’t just bundle this into the other compilation and sack off all those unnecessary localised ports instead.  That would have given us a selection of at least seven unique titles and that would have made this a much better proposition.   Also, it wouldn’t have hurt them to throw in some concept art and history for each game.

Hardcore shoot ’em up fans and fans of the series will no doubt pick this compilation over the other as the quality of the games here is far higher but shoot ’em up fans looking for a more balanced and relaxed time might find Darius‘ shocking difficulty spikes a bit too much but if you don’t mind quicksaving your way to success, the classic visuals and inventive boss designs combined with three excellent soundtracks make this a compilation worth checking out.  Even if you do wait for a heavy discount in a PSN sale in the future.

Darius Cozmic Collection Arcade
7 Overall
Pros
+ Three very good shoot 'em ups
+ The games look great on modern TVs
+ A good challenge for shoot 'em up experts
+ Great soundtracks
+ Quicksaving allows casuals to progress
Cons
- Multiple versions of the same game feel unnecessary
- Missing G-Darius
- Some absolutely nonsense difficulty spikes
- Lacks additional content
Summary
This collection of classic arcade shoot 'em ups really just boils down to three unique games and while each one is well-presented here and offers some great old-school action, the asking price for this compilation seems a bit much, especially when it isn't the complete collection that it pretends to be.