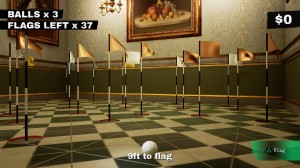 There are certain things that I think I was meant to get an appreciation of as I got older. Coffee, brussell sprouts, the music of Coldplay and golf. However, these things are all uncategorically shit. Until now there had only been one good golf game, PGA Golf on the Mega Drive, and that was only because it was one of four games I owned on that system so I had no choice. Dangerous Golf, can only be loosely described as a golf game. Coming as it does from the twisted minds of Three Fields Entertainment, a UK-based dev team full featuring some of coders behind the sensationally fun Burnout CRASH.

There are similarities between the two games. Where Burnout CRASH had nothing to do with racing and everything to do with carnage, Dangerous Golf operates in a similar way. Each of the game’s stages puts you in the middle of a room (a kitchen, a living room, a bathroom and so on), packs the area with stuff and then gives you one shot at trashing as much of it as possible and then a putt for you to try and hit the hole with. If that sounds ridiculous, it’s because it is. But for a game with such a basic premise, Dangerous Golf packs in some solid gameplay. 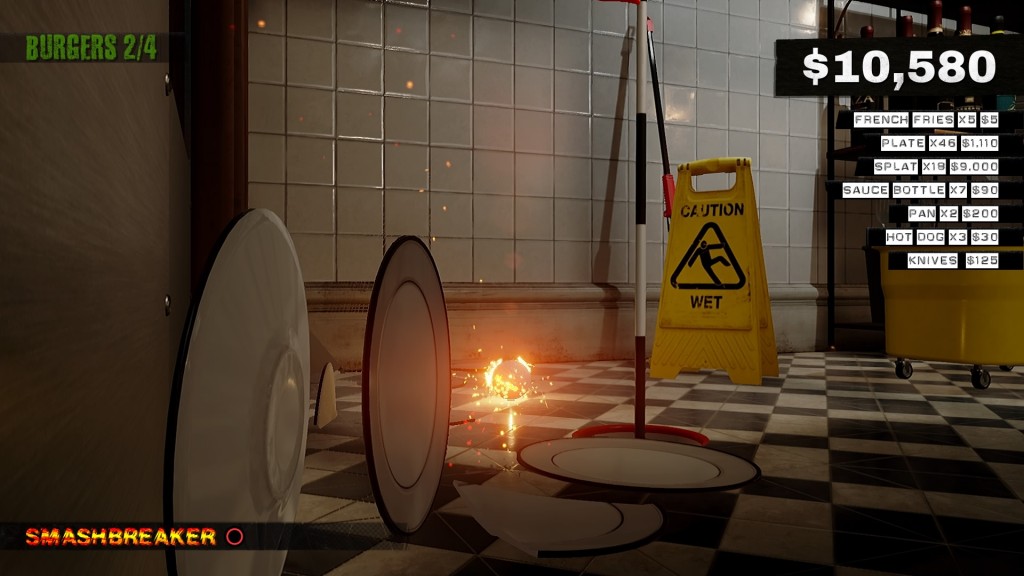 The game doesn’t have a fancy analog swinging mechanic or even an old-school three-click system for hitting the golf ball. You aim with the right stick and press up on the left stick (I don’t think power is a factor) and that blasts the ball. Each stage requires you to destroy a certain amount of objects in order to trigger your ‘smashbreaker’ move (which kind of riffs on Burnout CRASH’s ‘crashbreaker’). Doing so sets your ball on fire and gives you control over it (by manipulating the way it spins). This where you do the real damage, steering into as much stuff as possible and targeting whichever objects that stage deems to have the most value. It’s chaotic but the game’s 3D engine holds up well, keeping framerates solid and doing a good job of presenting the action (this was an issue before a recent patch).

As fun as smashing up expensive stuff might be, this would soon get old. However, the game starts to introduce new elements to the game and these really help develop the otherwise quite simple action. Additional bonus holes that only unlock as your score ramps up are a good addition, requiring way much more strategy than the early holes did and different stages (timed ones and ones where all you do is putt into dozens of holes) help keep things fresh. 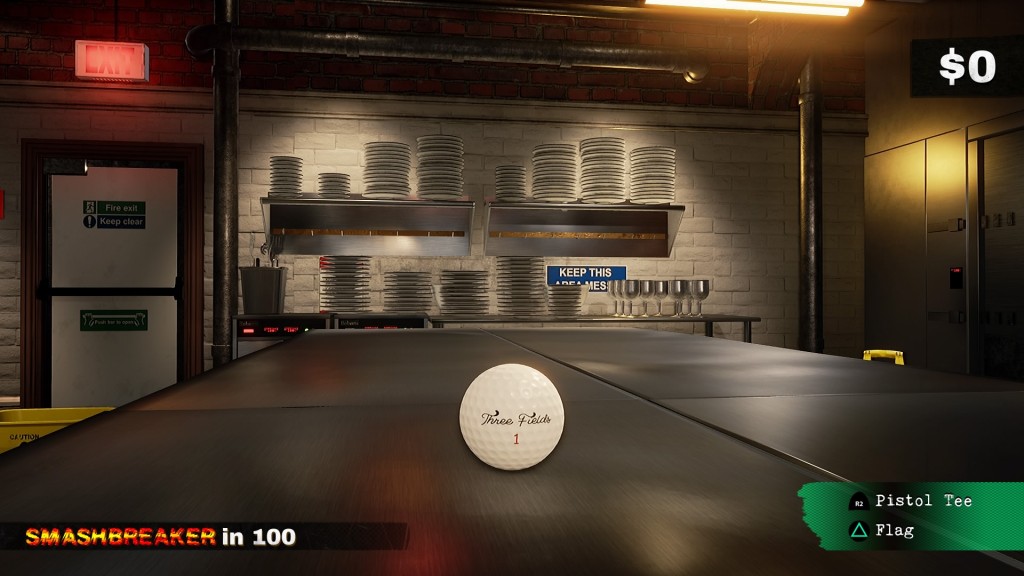 The real joy comes from trashing the scenery though and when you use your smashbreaker to take out all your high-value targets and the majority of the rest of the room, it feels great. All that is left after that is to hit the hole with your putt and thankfully, Three Fields were smart enough to give you a lot of assistance here by generally guiding you towards the hole even after multiple bounces off of various walls and objects. The scoring system wants you to take a few chances here, the only downside being that sometimes you don’t quite make it and it’s not always clear why. 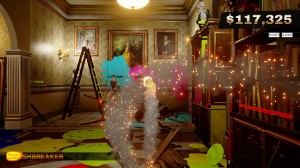 That’s a small fault in a game that is otherwise brilliantly fun and just as addictive. Dangerous Golf is old-school in how hard it is to put down and getting a digital-only release with this level of polish is kind of rare these days. And with Three Fields recently updating it to fix the game’s early issues (including reducing the restart time down from thirty seconds to two), there’s no reason to not get this up and running on your PS4 immediately. There isn’t much I’d change except for maybe revealing the target scores for platinum awards (the game shows you what is required for bronze, silver and gold) and maybe adding a tad more atmosphere in game. The menus are bold with some punky tunes going on but if the main game had some of that (and maybe drafted in DJ Stryker from the game’s tutorial to do some running commentary) this could have a sensationally arcade feel.

Right now though, Dangerous Golf is a joy to play. Sure, it’s dumb fun but in a time of dreary walking simulators and indie games about feelings, maybe it’s time gaming got a little bit more punk rock and games like this will lead the charge.

Dangerous Golf
9 Overall
Pros
+ Addictive and fun gameplay + Great presentation + Solid improvements over the launch version
Cons
- Lacks a little bit of atmosphere in game - Putting can feel a little random at times
Summary
As far removed from the traditional golf game as you can get, and all the better for it, Dangerous Golf is tremendous fun. Going to interesting places and smashing them up is just too enjoyable. We might need psychiatric help but for now we'll stick with this.
We use cookies on our website to give you the most relevant experience by remembering your preferences and repeat visits. By clicking “Accept”, you consent to the use of ALL the cookies.
Cookie settingsACCEPTREJECT
Manage consent