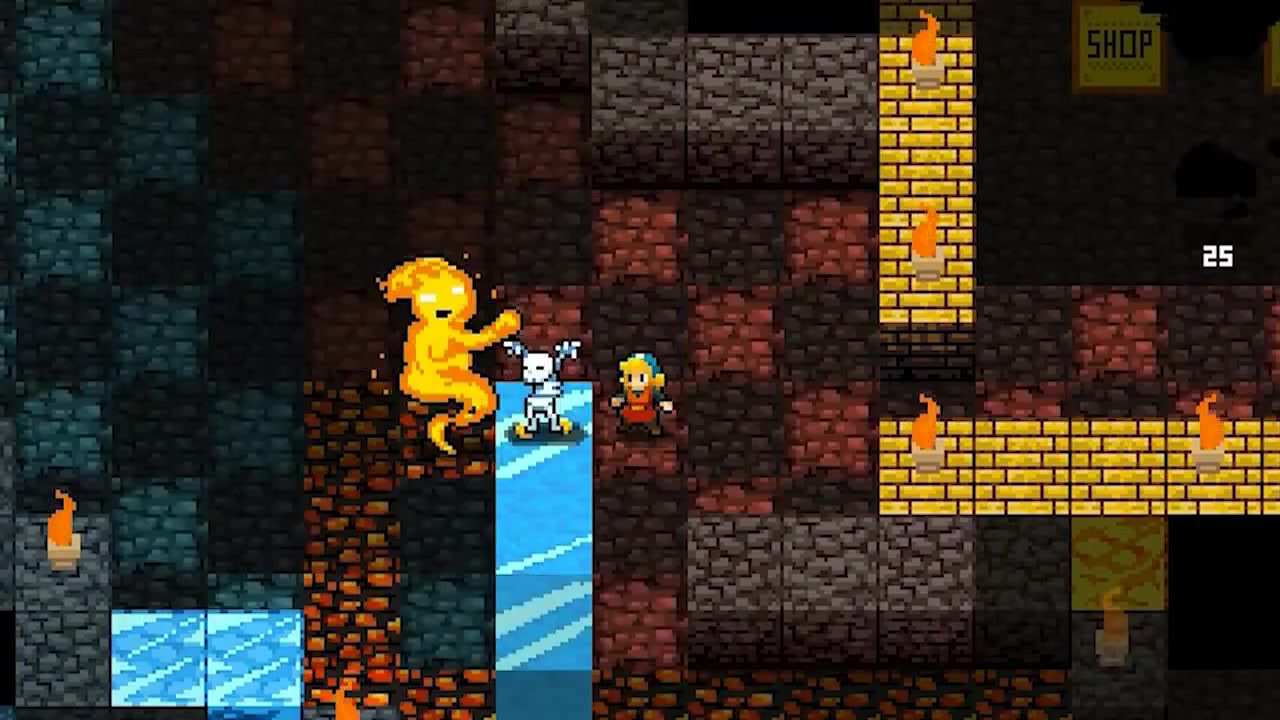 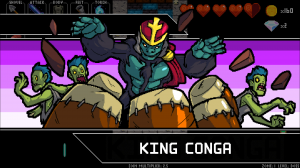 Indie developers do love a good roguelike don’t they? Recently we have had a whole slew of efforts including the sublime Rogue Legacy, Risk of Rain and FTL which have all been placed on respective pedestals for their challenging gameplay and excellent procedural generation. Crypt of the Necrodancer (hereby referred to as COTN) follows these examples and then diverts off in its own tangent, bringing rhythm action into the mix.This genre mixup may sound like it shouldn’t work and you are right, it shouldn’t. But upon playing COTN it quickly became apparent that some ideas are well worth pursuing.

When you first load up the game you are greeted with the main protagonist of the game, a young girl named Cadence who falls afoul of the Necrodancer who steals her heart and makes challenges her to get it back. The main caveat is that Cadence’s fate is tied to the rhythm and beat that plays through the crypt, meaning that she is only able to move/attack and cast spells when the beat plays. As is the case with all roguelikes the crypts are randomly generated, meaning that when you die you are sent back to the beginning whichever of the four zones you were playing. Each zone is made of three areas which are the main meat of the game with the dungeon crawling aspects, once you have finished these you are greeted to one of the many bosses that are randomly picked each time you play, similarly to the way bosses were found when playing Binding of Isaac. 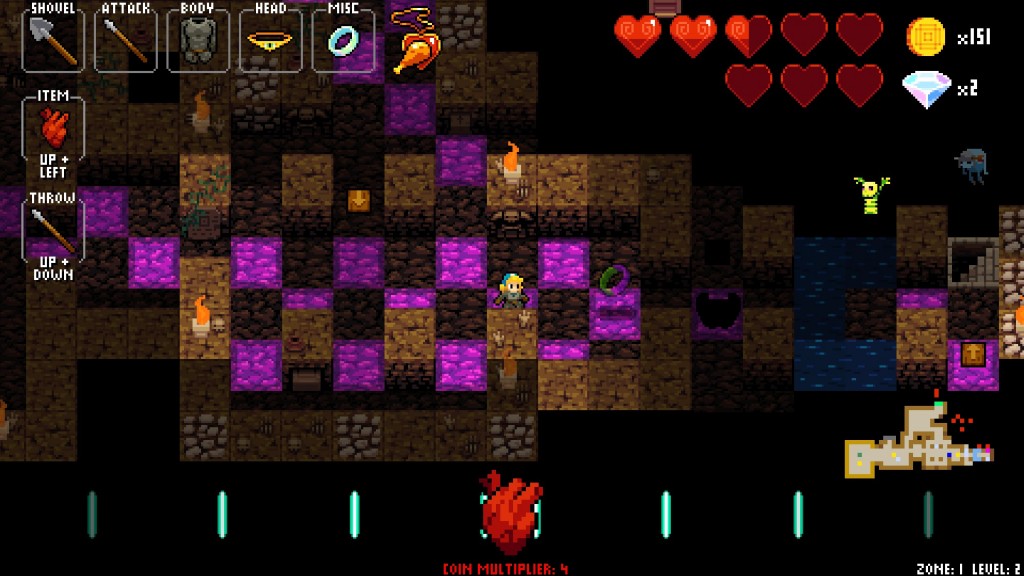 During each crypt level you can collect two forms of currency, Diamonds and gold. Gold is used to purchase upgrades while you are clearing a dungeon so that you can temporarily boost your abilities or weapons until you die. Diamonds are the main aim however as these allow you to purchase permanent upgrades and items which will then appear as upgrades which you can purchase with gold during a dungeon run. Diamonds offer a lot of different other options also, as you play through each zone you will meet caged NPC’s which once freed will meet you in the main game menu’s lobby and allow you to purchase more upgrades or spells to make your life easier, some even allow you to practise against enemies and bosses so you can learn attack patterns before you get wiped out you go crypt diving again. You have to spend your diamonds before you jump back into the crypt, similar to that of Rogue Legacy‘s gold system otherwise you lose them. I find this to be a great way to do things, of course the further you go into a crypt the more diamonds you gain but if you find yourself dying before getting a desired amount then you almost always have something to spend them on. This gives the player more options if they find themselves struggling on a particular zone as they can spend the diamonds on more chest drop chances or better weapon upgrades to make things easier for them.

Among these unlocks you can also meet different characters which are more than just simple skin changes for Cadence. Each of these characters provide a different gameplay mode which change the proceedings dramatically in some cases. For example one of the earlier unlocks is the Bard who allows you to move freely and out of time with the music, while this may sound the game will become easy I found the opposite to be the case, The Bard offers a more traditional roguelike experience meaning that when you move the enemies move to your steps which can result in them moving and attacking more freely so strategy is required. Another character is Eli who can only attack via the use of bombs, making him very similar to Bomberman. Eli is like Cadence and can only move and attack via the music so while you have the ability to kill most enemies quickly you have to be as careful as possible to pull off each attack and movement. This greatly adds to the replay value and gives the player plenty of choices about how the game can be played which is particularly handy if you find yourself getting stuck with one character and you want to still play the game but just from a fresh perspective. 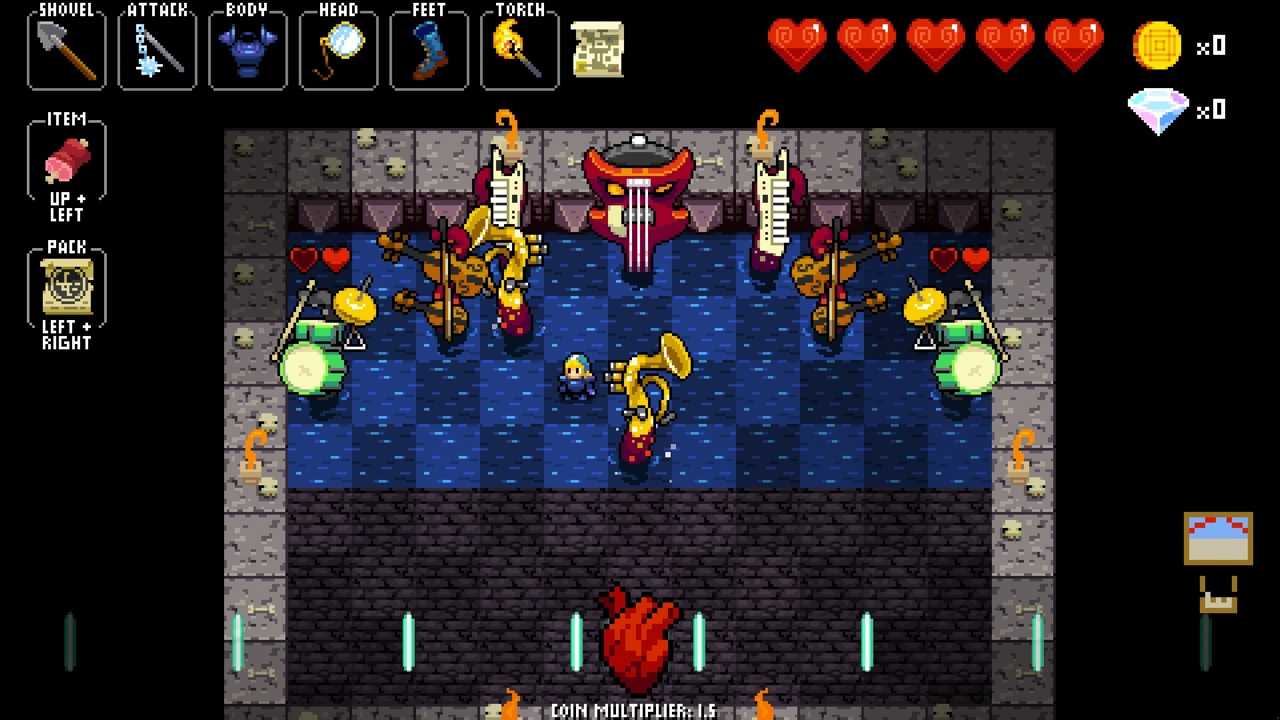 As the main theme of the game is in how you play to the music the soundtrack would have to be pretty good to maintain your attention and for my tastes the music fits the bill perfectly. There are sixteen tracks provided by Indie composer Danny Baranowski, who provided his talents to other games such as Super Meat Boy, Binding of Isaac and the recent Amplitude remake. Danny has provided his A game for COTN with each level providing a new genre and tempo for you to tackle with. If you are worried that Danny Baranowski‘s chiptune style may not be to your liking then there are two remixed versions of the games soundtrack which are provided by Alex Esquivel who provides a more electronic style and Jules Conroy (AKA FamilyJules7x of Youtube fame) who brings a more Heavy Metal influenced flavour.

The biggest shame about COTN on the PS4 and Vita is not so much in what the developer has done but in something that they are not allowed to do. On the PC version of COTN, players are able to play the game using their own music. The game has a built in beat detector which would make the levels, enemies and movements generate no matter what song you were playing. This would make COTN’s appear somewhat infinite however due to licensing issues Brace Yourself Games were unable to include this into the console version. While a deal breaker for some I will say however that there is more than enough to get on with with the existing soundtrack but still it would have been much nicer to have, after all, who doesn’t want to slay beasts to the excellence of El Chombo’s Macarron Chacarron? 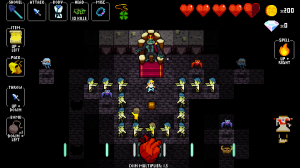 Although the aim of the game is in the music the visuals have not suffered in the process. What you have here is a typical modern retro visual style and at its least impressive it does the trick. What makes the art in COTN stand out is the inventiveness of the boss monsters and the unique flourishes on the standard enemies as they react and dance to the music. My particular favourites the stone golems in zone two that appear to do a shoulder shuffle to the bass line as they groove towards the player with more funk than a Prince album. Also the shopkeepers that sell the upgrades during gameplay that sing along to the main melodies in the music as you get near.

Crypt of the Necrodancer
9 Overall
Pros
+ Pleasing retro inspired visuals and character design + Brilliant and varied soundtrack with three different types of musical styles + Extra unlockable characters mix up the gameplay, boosting longevity + You can even play this with a USB dance pad. Yes, that thing you bought on the PS2. Don't lie, we know you did.
Cons
- You will see the first zone a ton until you unlock some better upgrades. - No custom soundtrack option for the PS4 or Vita
Summary
Crypt of the Necrodancer is one of those rare examples of a conceptual mashup going incredibly well on the first try. The blend and balance of rhythm action and roguelike dungeon crawling marry incredibly well to make a brilliant and engaging adventure. If you have ever enjoyed either of the aforementioned genres or if you like a unique experience then this game deserves a try.