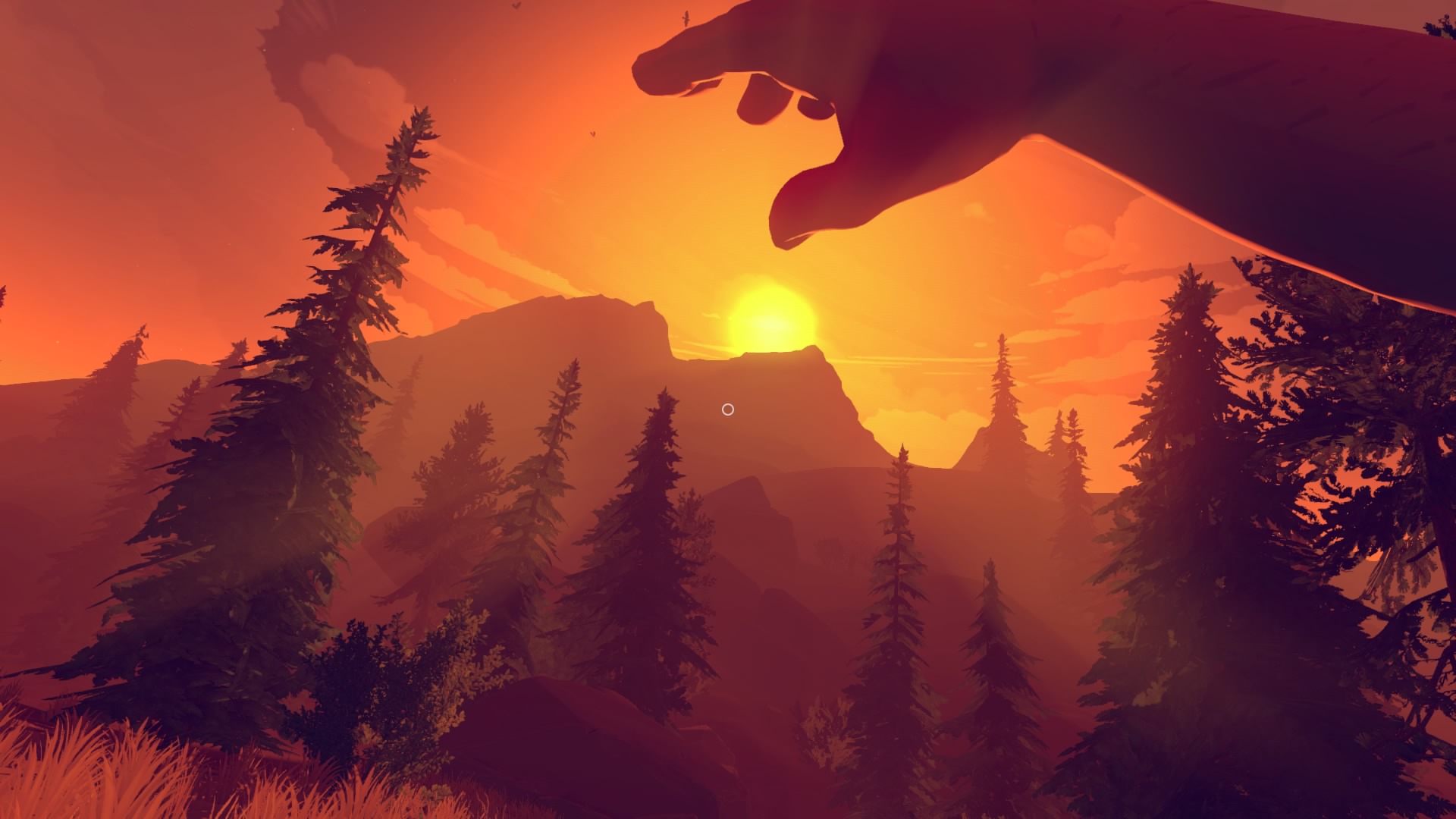 Some people just want to watch the world burn and, in the case of the men and women of Wyoming’s Firewatch, it becomes a profession. Rather than develop into an arsonist’s fantasy, Campo Santo’s debut adventure aims to tell a tight tale about a small cast of interesting individuals. 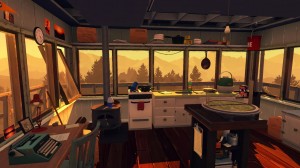 You inhabit the shorts, shoes and beard of Henry, a man who takes up the vocation during a white-hot summer in an effort to clear his ailing mind. A smartly executed prologue lays out his reasons for going and delivers the game’s first emotional punch. Henry has clear motivations for getting out into the wilderness and the game gives you ample situations to shape his personality and give context for his actions. After setting up at his watchtower, he comes into contact with Delilah who quickly becomes his main point of contact and supervisor.

The gameplay consists of the walking and talking formula which characterise such titles like Gone Home and Dear Esther. As you walk through the lush forestry and rocks you converse with Delilah over your radio to flesh out their friendship, the environment and the characters and events which shaped the park’s past. Having an off-screen companion does a great job of making you feel isolated whilst the chatter between the main characters allow their relationship to have a greater degree of focus. Delilah’s initial snark portrays how she’s been in the job way too long and I initially feared this would saturate the game’s writing. Thankfully, your responses can diffuse or enforce her attitude. Your decisions shape how they deal with each other although there’s no grand sense of player choice. Like I said before, your options mainly colour Henry as a person and shape his motivations for doing what he does. He’s no renegade. He’s no paragon. This lack of opportunities to branch the story might harm the game’s ability to be replayed but, as with experiences like The Walking Dead, your first time is usually your definitive chain of events. 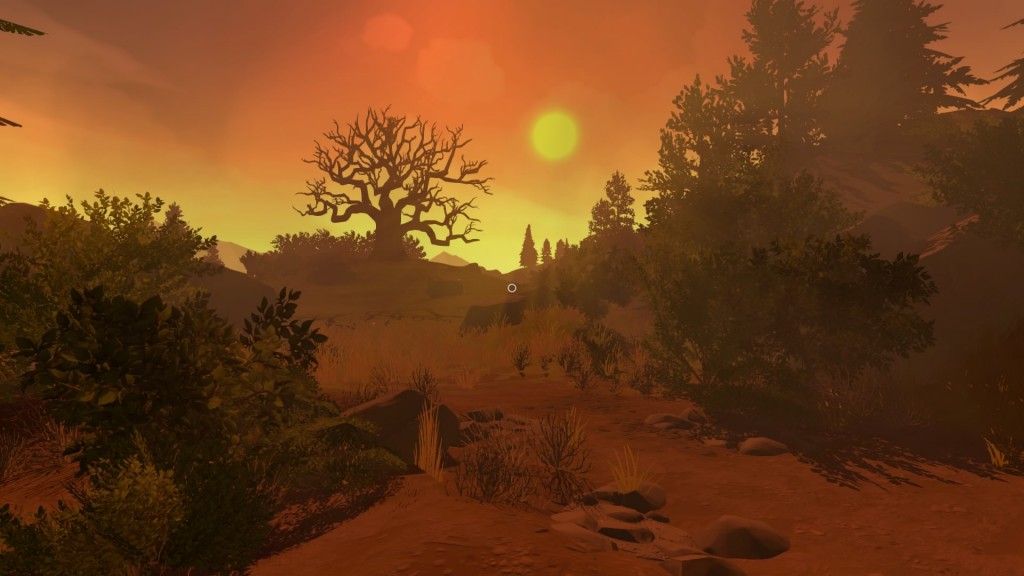 The forest itself is smaller than it initially appears but there’s a varied landscape with canyons, lakes and camps scattered throughout. The scenery occasionally offers up some wonderful vistas and the game’s events utlise locations well to ensure you see the majority of it. There’s some backtracking Involved and there’s always the prospect of getting lost but your trusty compass and map should help you navigate the various trails. There is some stuff off the beaten path but those inclined could mainline this game in four hours. Its brief but there seems very little in the way of filler. Sound is kept to a minimum with some light ambience giving the greenery some life and some low-key music arrives at the appropriate moments to let you know you’re on the right track. Firewatch manages to funnel you along when the story requires it whilst not making it feel forced.

In this time, the game manages to succeed in delivering a satisfying narrative through Henry and Delilah’s exchanges and some impressive environmental storytelling. The events that unfold have a great sense of mystery and just enough information is withheld for you to draw your own conclusions. However, the writing certainly can’t resist some misdirection and there are some obvious pacing issues. The progression of time is played with a touch too liberally as the game rushes towards its conclusion. A conclusion which, at the time of writing has provided much debate. I played Henry in a specific way which seemed to fit well enough with Firewatch’s narrative. I’m curious to see if going another route jars against it. 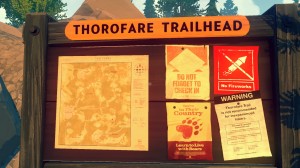 It’s impossible to ignore the game’s various technical faults. I’m told Unity doesn’t perform great on the Playstation 4 and the engine struggles and stutters in ways that certainly break immersion. Textures will draw in and, in worse cases the game might crash. I encountered one of these during my first session and, whilst I didn’t lose any major progress, it had me in a panic. It’s perhaps not enough to stop me recommending this game but be aware. Hopefully the larger issues like this can be addressed. Stuttering I can live with.

These technical problems are a worry and the game’s pacing seems to work against it but I’d still recommend Firewatch to those that have an afternoon to spare for an engrossing story with some well-developed characters. Campo Santo have came out of the blocks strongly and delivered something thoroughly enjoyable and intriguing.

Firewatch
8 Overall
Pros
+ Engaging storytelling. + Intriguing cast of characters. + Lush, beautiful landscapes. + That prologue, man.
Cons
- Technical jitters. - Uneven pacing. - Not much reason to replay it.
Summary
Firewatch is a great story about real people trying to deal or escape from real problems. Uneven pacing somewhat dents the flow of the tale and, there's nothing scarier than a game locking up but this delivers a memorable experience. There's a few places to go and stuff to see off the beaten path but the main attraction is a well-executed hike filled with mystery.
We use cookies on our website to give you the most relevant experience by remembering your preferences and repeat visits. By clicking “Accept”, you consent to the use of ALL the cookies.
Cookie settingsACCEPTREJECT
Manage consent