The game is a story-driven affair, far more so than you’d expect from a fighting game, following the general structure of any fight-based film you can think of and while the titular Cruz brothers do feature heavily, this is really the story of Marcus Luz, a boxing coach whose career goes off the rails when his best fighter is murderered by Tray Sorrow, leader of the Sons of Subversion, a biker gang whose marketing guy is doing just enough to stop them getting sued by the TV channel FX.

Luz is offered his shot at redemption though when he discovers two raw talents, Felipe and Igor Cruz. From this point on the story follows the familiar path of them trying to get noticed on the regional scene before fighting for the title. 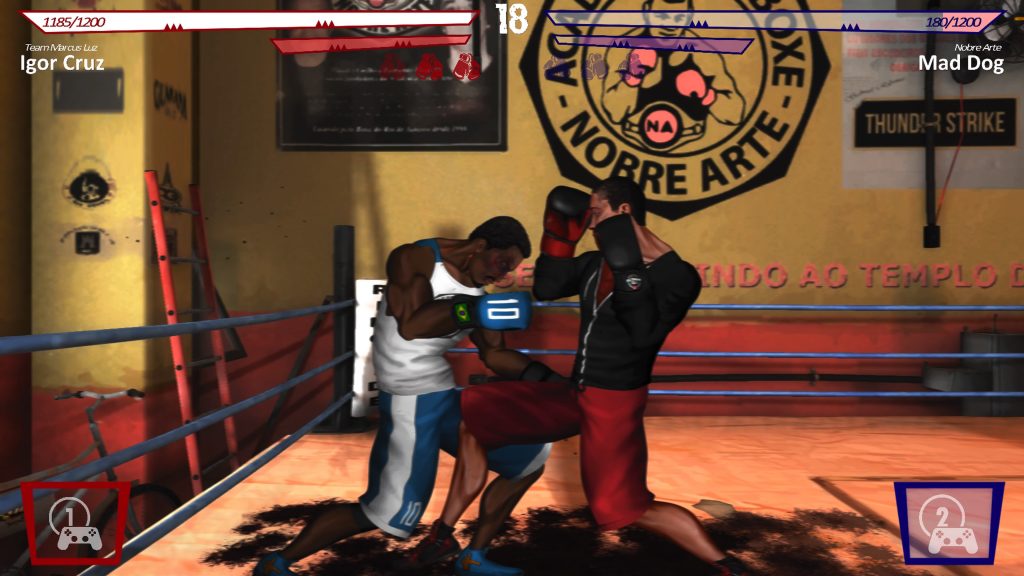 Each chapter of the story leads to a fight. Either against a gang member, a backyard fighter or some sort of pro boxer and the story is presented as comic book style art narrated by voice actors.  The art style for these cutscenes is basic and cartoony but also oddly realistic in places (like they’ve drawn over photos or something like that) and the story is reasonably engaging at first but when you get into your first fight, the realisation sets in that this game is going to be a struggle to get through.

Fights are one on one, side-viewed affairs (like every fighting game before the likes of Tekken added an extra dimension) but they are also ridiculous and not in a good way. Your fighters feel like they are pieced together from cut outs of a torso and limbs, almost like Ragdoll Kung Fu with characters occasionally seeming to fold in half.

When you add to that their basic bouncing animation, it all feels a bit like you’re throwing puppets at each other. This is compounded by the fact that the camera likes to zoom in and out like a NEO GEO game and, despite the relative realism of the settings and fighters, the screen tends to flash with colour and electricity due to some amazingly out of place special moves from the characters.  Why are boxers generating purple electricity like some sort of flamboyant Raiden rip off?  The characters, for the most part, have no shadows either, and any writing on their clothes reverses when they turn around adding another layer of sketchiness to it all. 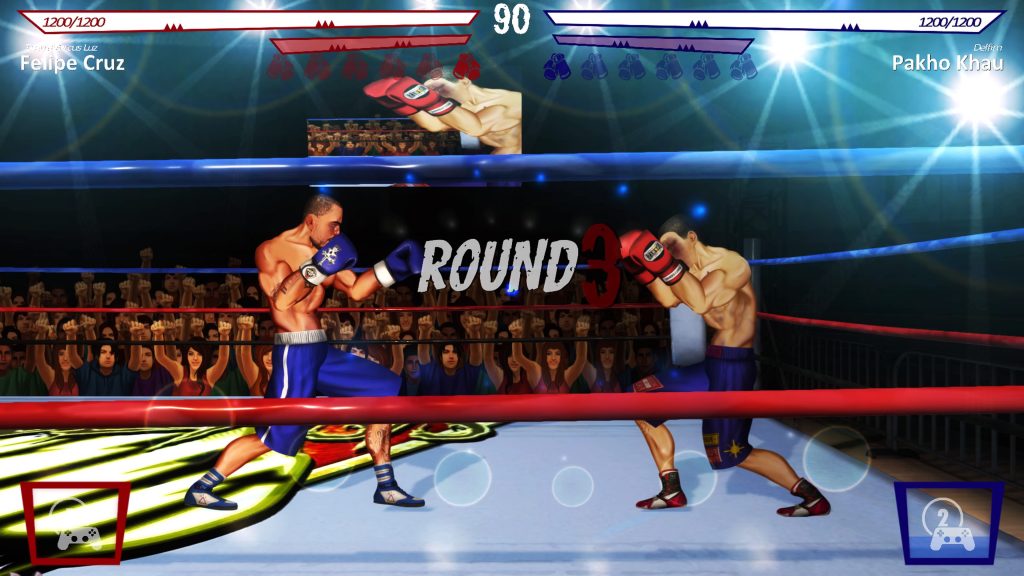 Fighting feels weird in this game. Having put some serious time into EA’s UFC games, there is an inauthentic quality that goes through the gameplay in Cruz Brothers. From the fighter’s exaggerated crouching stances to the ridiculous speed that it all moves at. It can be genuinely impossible to know what’s going on at times.

The move set is odd also. Rather than the usual light/med/strong power strikes or even low/high (as in targeting) ones, the game has light attacks, strong attacks and ‘walking’ attacks. I couldn’t quite figure out the differences beyond basic damage values but I tended to find that success came down to mashing the walking attack button enough to get the opponent’s health down to a point where I could finish them off with a special attack.

Mapped to L2, these attacks are ridiculous. Taking off 60-75% of a fighter’s health in one go. Success usually comes down to trapping a fighter in a combo (by mashing a button) and the firing off your special. If you get caught by one, you’re probably done for too. The same goes for if the enemy decides to have one of those rounds where he combos you to death.  An annoyingly regular occurrence where you just can’t seem to land anything while your opponent seemingly turns into Neo or something.

Quarter circle special moves can also be accessed although these are extremely unreliable to pull off. It’s like going to play Street Fighter 2 on your mate’s SNES in the ’90s and them giving you the rubbish third-party pad and indeed even the basic moves struggle because of a general lack of sharpness in the controls.  Some of those special moves are odd too. Some fighters are able to bend backwards (at almost 90 degrees) and then fire off a cloud of pink energy, not at you but just generally around the place, which damages you and scuppers your attack, further removing itself from the realism that the plot would surely suit more.  Oddly, the game’s interface is very sensitive to d-pad presses, making navigating it a bit of a chore. This is particularly strange given how unresponsive the in-game controls are. 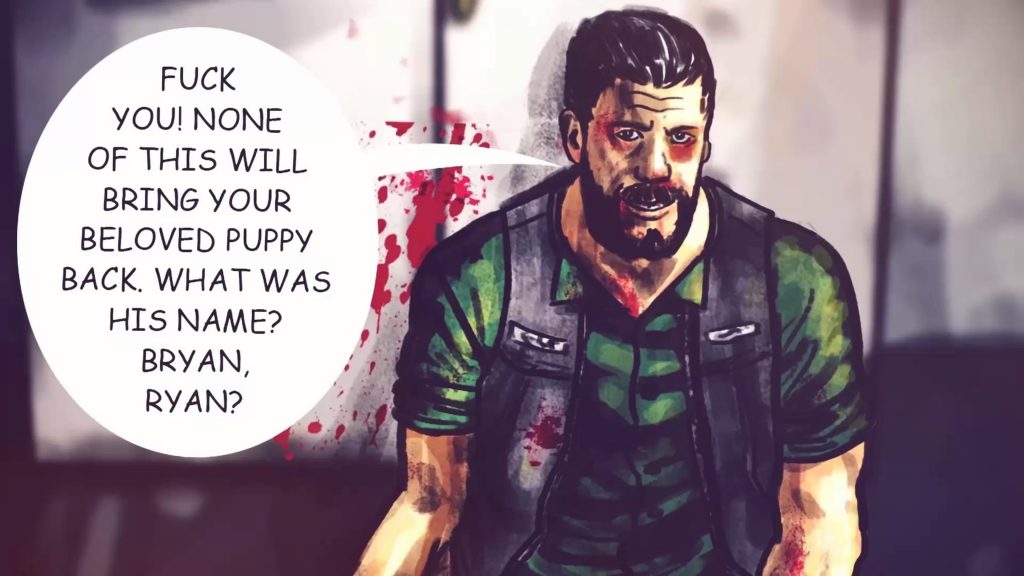 In the end the game ends up being a button-mashing mess that makes no real sense. This is further supported by the fact that the story just ends with no resolution (more story is promised as DLC but this is so abrupt that it just adds to the comedy of it all) and the fact that all of the dialogue seems to have been recorded with the mic actual in the actors’ mouths. The distortion and high volume levels seeming to be the work of someone who has no idea how to mic up a voice acting booth.

With all that said, despite the almost comedically bad animation, combat, voice acting, dialogue and everything else, the game does barely hold together and at least puts up a bit of a challenge at times. It’s no Rise of the Robots, which is why it’s not scoring a zero, and is relatively bug free with the only problems I’ve seen being a couple of graphics glitches.

One battle ended up being entirely a button mashing exercise as the two combatants were dressed the same and the game’s rounds indicator, which is shown by red and blue gloves, assigning the wrong colour (I had a red indicator but was wearing blue gloves), further confusing things.

Once you get through the story you can then play through championships if you fancy it (which you probably won’t). These involve seven opponents and must be completed without stopping or losing. There’s a little bit of drama and challenge to that I suppose, and these represent the game’s harder trophies, but again these tend to be frantic button-mashing affairs too. 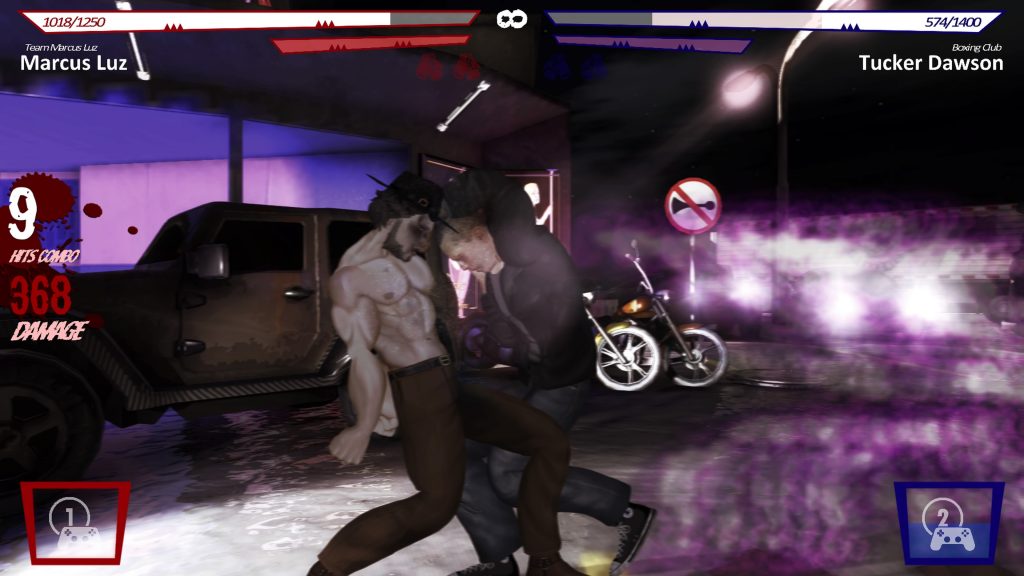 There may be more nuance to the controls and fighting in general than I’m seeing, but the game offers no tutorial (beyond a splash screen detailing the button commands and basic combos) and button mashing tends to work well, at least if you drop the game’s difficulty down, which I found myself eventually having to do.

Cruz Brothers seems like a game where all of the bad aspects come from its design rather than the coding. Everything wrong with it is almost deliberate. It’s not struggling for framerates or crashing every five seconds. It even seems to unlock the trophies correctly (which, trust us, is not a given when it comes to indie games). No, the problems here are all with the design choices that have been made by the devs. From the odd Thunderbirds puppet-style movement, to the utterly button-mashy combat. This is all stuff that should have been improved during the game’s development and the fact that it’s all in there is a worry of DCF who clearly are capable of so much more, but need to start focusing on gameplay before story. Especially in this genre.

Summary
The sad truth about Cruz Brothers is that we've played far superior games in this genre that were made over thirty years ago.