Crash Drive 3 is a multiplayer party game from M2H, the Dutch developers who usually better known for their sombre WW1 FPS games Verdun and Tannenburg.  Well, this is a markedly different kind of game which instead sees players facing off in multiplayer challenges based around driving.

The fundamentals of the game are pretty easy to grasp.  After a short tutorial you are given a basic car and are dropped into the game’s first area, Forest, with a bunch of other players.  Crash Drive 3 is a cross-platform game though and so you’ll be facing off against players from other consoles, PC and even mobile devices.  The game will then pick a random event type and you’ll face off with glory and in-game cash up for grabs. 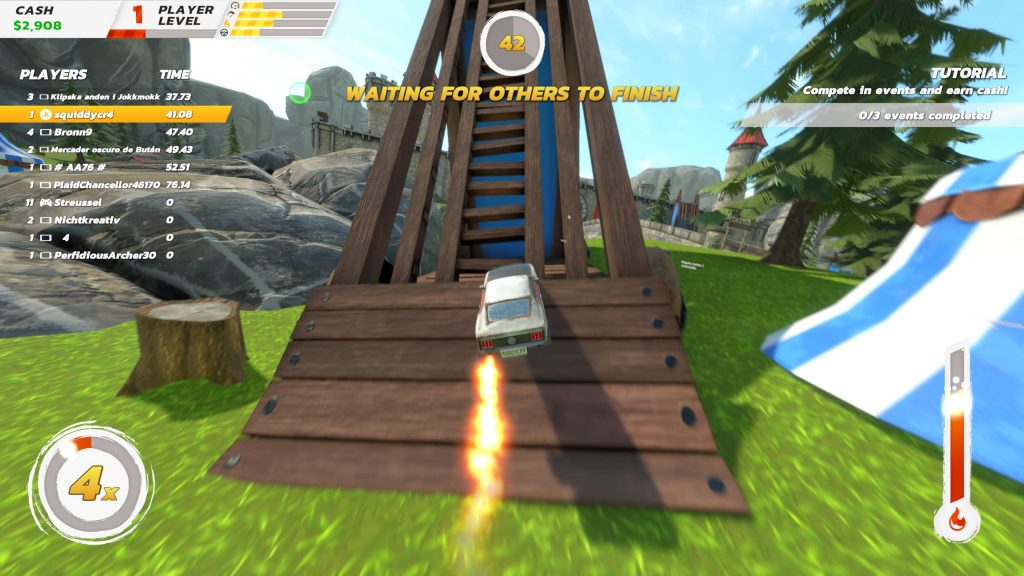 Do well enough and you’ll be able to unlock and upgrade better cars from a roster of almost 50.  These include cars, buggies, vans, trucks and more and each has different stats for spped, acceleration, boost and handling, so there’s plenty of content to unlock here.  You can also apply minor customisations too but nothing as full on as paint jobs or decals.  Then it’s just a case of doing more and more of it.  It’s basic stuff but easy to grasp and it doesn’t weigh you down with calibration and tuning options, unlike other driving games we’ve played recently.

The gameplay is the main thing though and thankfully Crash Drive 3 delivers a very enjoyable experience here.  The game will randomly pick what event you have to play from around ten.  These range from ones where you collect coins, tag objects with tricks (like a Tony Hawk bonus mode), build your score, have actual races and more.  Some are quite unusual too, such as one where you have to damage a giant beach ball.  It’s all good fun though and we did pretty well online, presumably against the kind of mad person who plays on a phone. 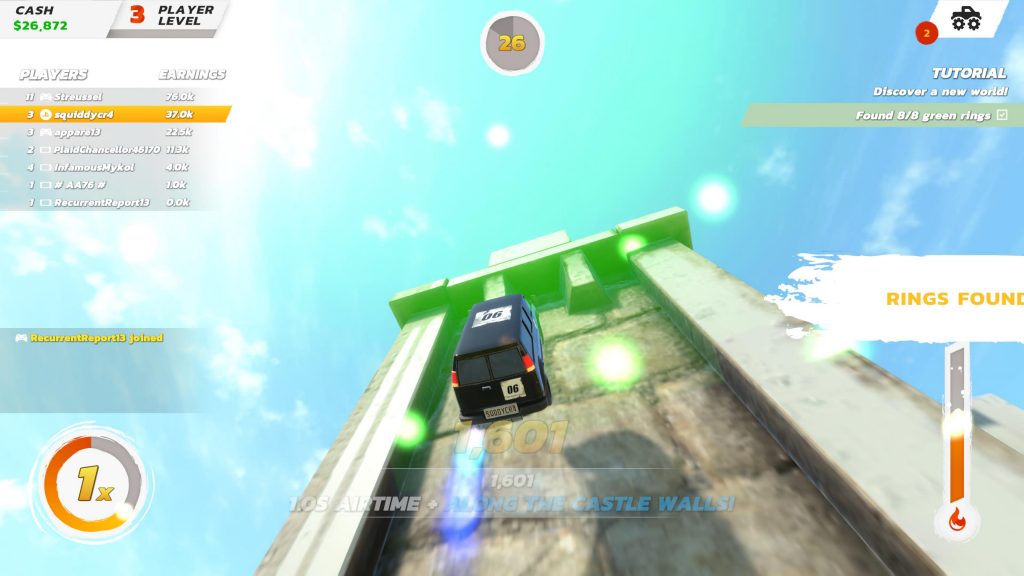 There’s a good amount of variation and the modes all work well.  There’s even a Tank Battle mode on the third level which sees you battling other players by trying to shoot them off of suspended platforms.  It’s straightforward enough but fun.  However, it does show up a major problem with the game and that involves the process of unlocking levels.

To unlock the second area, Arctic, you have to collect eight of the ten rings that are in the first level.  Similarly, getting eight in Arctic unlocks the Canyon level which is where the tank battles happen.  Area one is well populated.  Area two is less well populated.  Area three is pretty dead with us never seeing more than two other players there.   Worse than that, it’s not immediately obvious how to unlock the next area because there are no rings to find.  You just have to find the boat that takes you there and pay $25,000, which is simple enough but it’s not clear.  And so, the further you go, the less people come with you. 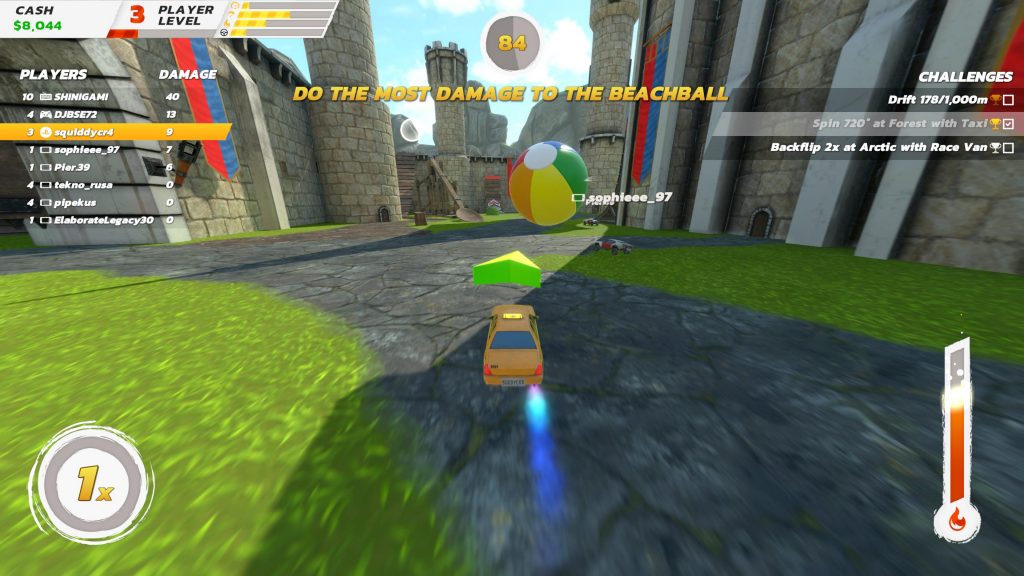 It’d make sense to have these areas unlocked by default because the single-player, collectible-finding aspect of the game is essentially worthless.  So why lock content behind it?

But, that aside, when the gameplay is in full swing and you’ve got a packed lobby all chasing each other around or tricking off of every available surface, Crash Drive 3 is an absolute gem to play.  There’s a degree of fun and madness that this kind of game needs.  Indeed, if this had been a PS+ game instead of, say, Destruction AllStars, then Crash Drive 3 would be one of the most popular party games on PSN, we truly believe that.  However, for now, it’s going to set you back £20/$20 which isn’t really going to do it any favours. 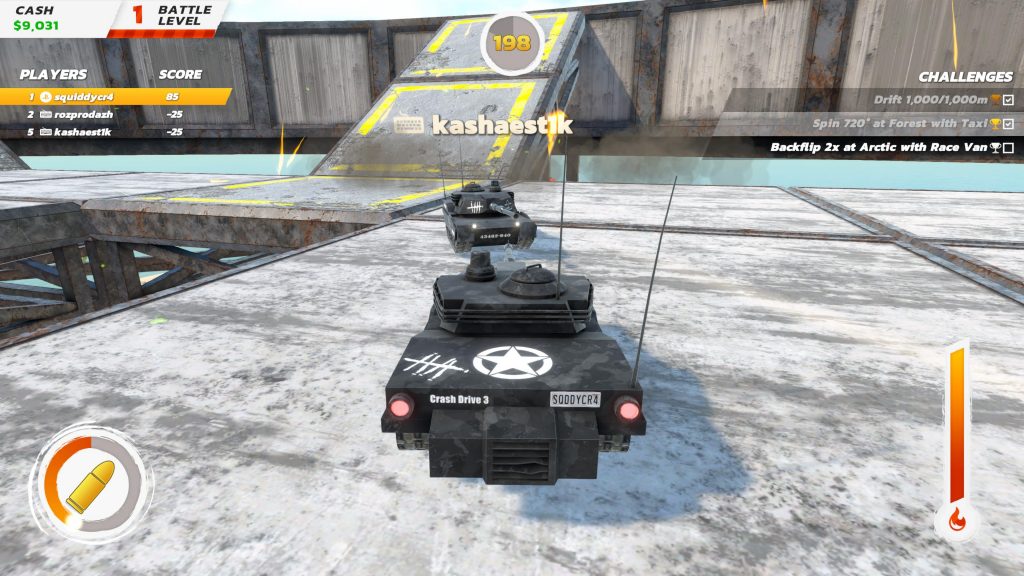 We reviewed the PS5 version of the game and, well… we can’t really say where those extra terraflops have gone.  There’s no haptics at all (not even basic vibration which, for a driving game, is really poor) and the visuals don’t scream PS5 at you at all.  It’s fast though and feels smooth enough and we didn’t really notice the loading times, so that’s pretty good.  Visually, the game has a simple, dare we say almost Fortnite-esque look to it with tons of colour but not a huge amount of detail.  The sound is limited to some generic tunes and basic sound effects, but it does a job.

The gameplay is the star here though and while we usually detest online-focused games, Crash Drive 3 suited us down to the ground completely.  We felt very competitive and had a lot of fun with it.  The game arguably could use a few tweaks and a bit of additional content but if you put it up against the current party faves of Destruction AllStars and Fall Guys, we’ll take Crash Drive 3 all day.  If anything, it reminds us of Twisted Metal but with more stunts and less shooting and that’s enough to keep us very happy.  Yep, we like this one.  A lot.

Crash Drive 3
8 Overall
Pros
+ Riotously good fun
+ Cross-platform play really helps it
+ Enjoyable event types
+ Simple meta-game
Cons
- Doesn't show off any PS5 features
- Later levels should be more accessible
- Average presentation
Summary
Crash Drive 3 is a killer driving-based party game with excellent cross-platform support and a focus on pure enjoyment. A few niggles hold it back though and we can't help feeling a new name and cheaper price would have gained it much more of an audience. But, for now, don't sleep on this one. It's a gem.