Chicory: A Colorful Tale is brought to us by developer Greg Lobanov and friends with publishing by Finji. It’s a fairly lengthy action RPG with a painting mechanic that is key to solving all manner of environmental puzzles.

At the outset you’re asked what your favourite food is. In our case, we went with calamari. Choose wisely as it turns out to be your player character’s name. Though ‘cheesy wotsit’ might work as well. You start Chicory as the janitor of the titular character’s townhouse. After a short introduction to the painting mechanics, you’re gently led down a corridor towards Chicory’s room. There you find a paintbrush and that’s where your adventure begins. 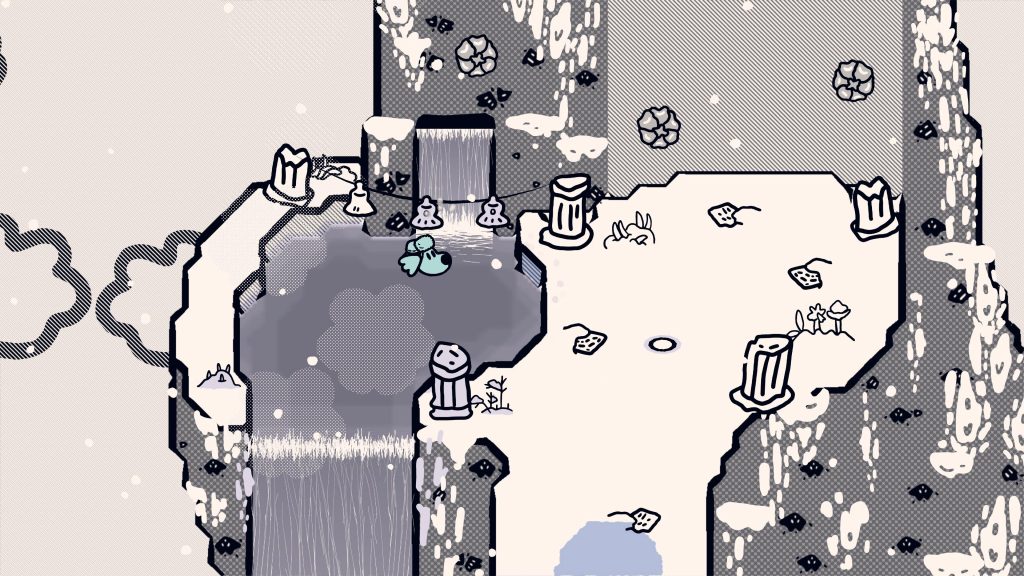 The paintbrush is magic you see, Chicory the rabbit being the wielder. This is an honorific title passed down from master to apprentice, only by picking up the paintbrush, you’re assumed to have taken this title. Except you haven’t and your legitimacy is called into question by virtually everyone you meet in the opening chapter. NPCs can often be brusque and abrupt, matters such as identity and working too much in these testing times are handled deftly throughout. If you’re having a hard time of it, some of the themes might still smack you in the chops.

You start out in the village of Luncheon, home of Chicory. All the areas and characters are named after foodstuffs you see. Hence your being asked what your favourite food, so it doesn’t turn out too tonally dissonant. Though you could be a dick and call yourself something rude we suppose. 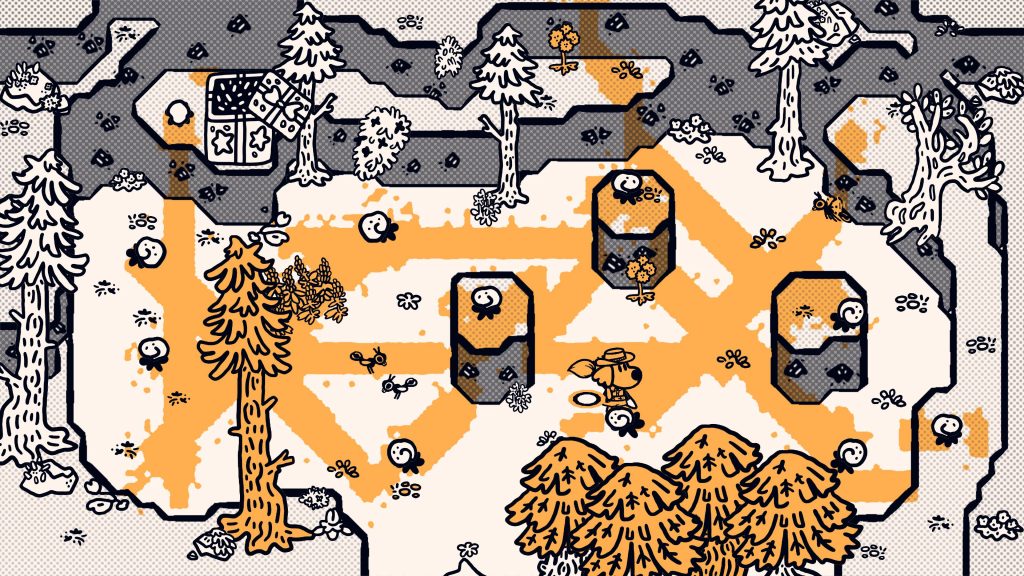 Anyway, due to reasons we won’t go into for fear of plot spoilers, the world has been drained of all color [sic] and it’s down to you to repaint the world as you unravel the mystery and the source of the darkness that blights the land. After a few frosty encounters with Chicory and his master, you’re eventually acknowledged as the wielder, regardless of the circumstances leading to that.

New mechanics and abilities are steadily dripfed in the best tradition of the classic Zelda games, with initially inaccessible areas eventually yielding as you gain abilities. Initially you’ll discover that certain plants react to being painted, acting as bridges and trampolines. When you’re outside the villages, each screen acts as a series of puzzles that you’ll need to chain together to either reach a collectible item, or more typically your path to the next screen, 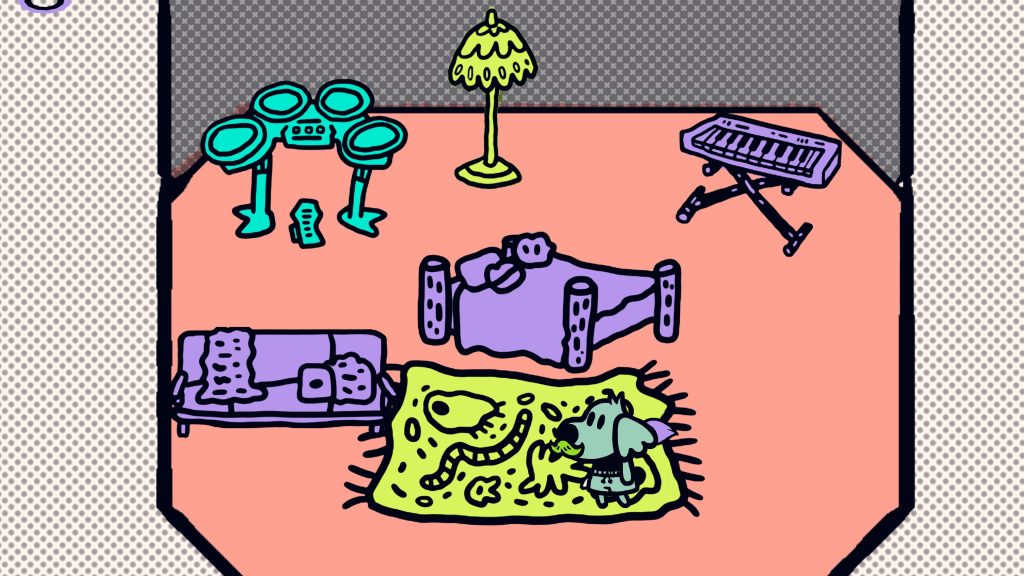 Regards the collectibles; you can collect clothing, brush styles, lost animal children and trash. Clothing is strictly cosmetic, but no sooner have you found one outfit you think looks ace, another is unlocked. It’s not quite Animal Crossing levels of customisation, but in the same ballpark. The fact you can paint yourself is a definite bonus. Brush styles are a mixed bag, in the early stages you’ll find yourself struggling to use them as you get to grips with the painting mechanic.

On the subject of the painting mechanic, it is well done with

acting as the colour and

as the eraser. You can also use the touchpad on your controller if you so wish, but our inept fumblings meant we stayed with the thumbsticks. Let’s just say we opted for the impressionist angle when it came to the art classes you populate the various canvasses around the world with. When the teacher appraised our art, devoid of quality to our eyes, they were very kind. Moreso than this reviewer’s GCSE art teacher was anyway. 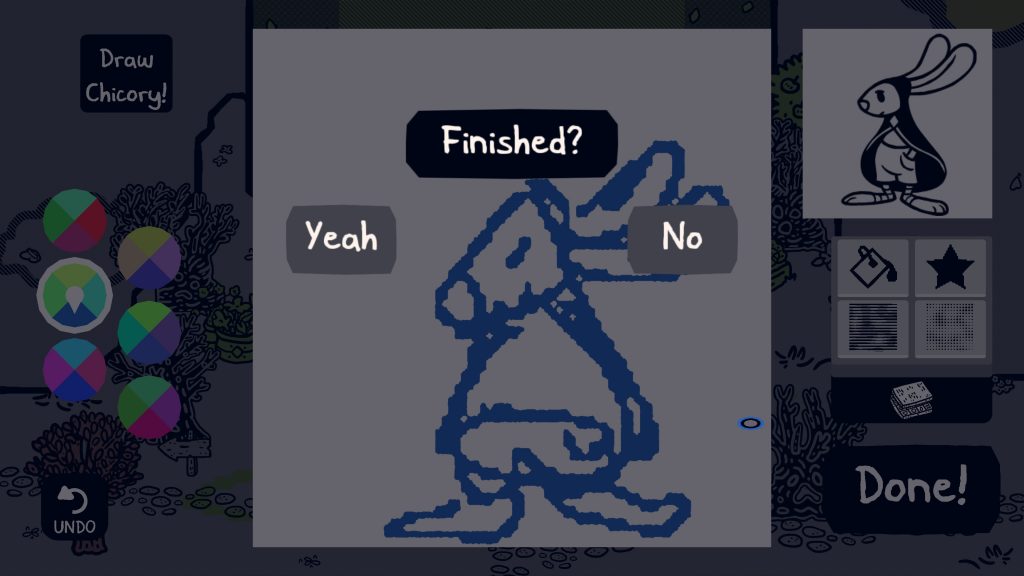 As you paint the world, the colours show up on the minimap. Chicory is full of deft little touches like this and feels like a cohesive whole rather than a splintered mess by avoiding the trap of tonally dissonant areas such as in Breath of the Wild for example.

Lost animal children are hidden in trees and its down to you to shake the tree and rescue them. When you’ve rescued enough, you can collect furniture sets. You can also recycle rubbish at selected locations for individual furniture. Every so often you’ll be asked to furnish a location for an event, in one case a rooftop party. It’s a nice way to utilise what would otherwise be a cosmetic item.

As well as the collectibles, none of which feel like any sort of chore, you can even get a job as a mailman. It’s a fun way to make you explore the locales you’ll encounter, as rather than an address you’re given a vague location as to where letters are to be delivered. Not exactly cryptic, but similarly not blindingly obvious either. 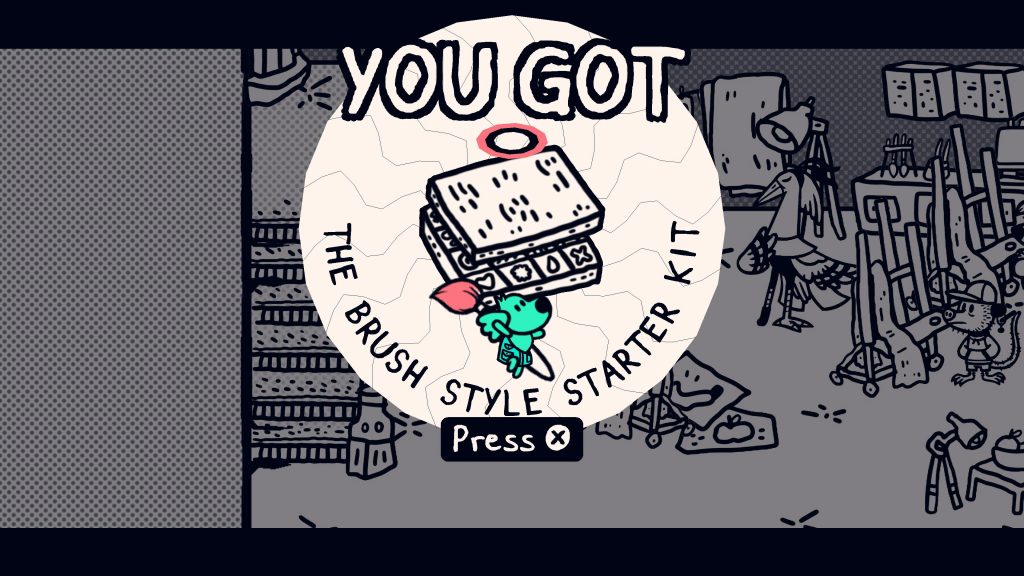 Around the same time as you get the mailman job, you can also unlock transit benches as a fast travel option. These come in handy, but to be honest by the time you unlock them, it’s likely you’ll be traversing the world fairly quickly due to your abilities anyway.

Everything is scored by wonderful music from Lena Raine, composer on the Celeste soundtrack as well the Nether update on Minecraft. Seriously, it’s quite lovely, we recommend you check it out pronto. Along with the beautifully drawn art by Alexis and Madeleine (as they are credited on the title screen), it gives Chicory: A Colorful Tale a beautifully innocent feeling, as well as depicting low moments too. 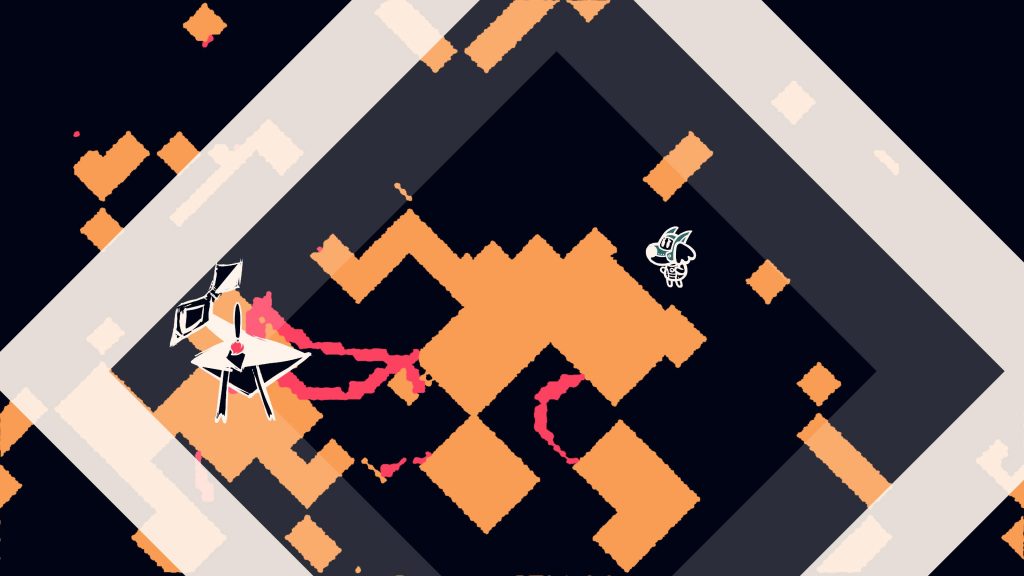 Along with couch co-op play, what we have here is the perfect game to spend a rainy afternoon with a younger family member, or heaven forbid your better half. Admittedly the requirement for two PS5 pads might curb your enthusiasm a little, but what better excuse to get one of those new controller colours we covet. We played a little on the PS4 version of Chicory, our base model creaking under the strain a bit, but it’s about the only low point we encountered otherwise.

Chicory: A Colorful Tale is a delight that you’ll get hours of play from, even if you’re somewhat lacking skills on the art side. Even the boss fights are lenient, leaning more on the storytelling aspect than tearing you a new one. If you’re struggling, the game even prompts you if you want more health to get through the fight. 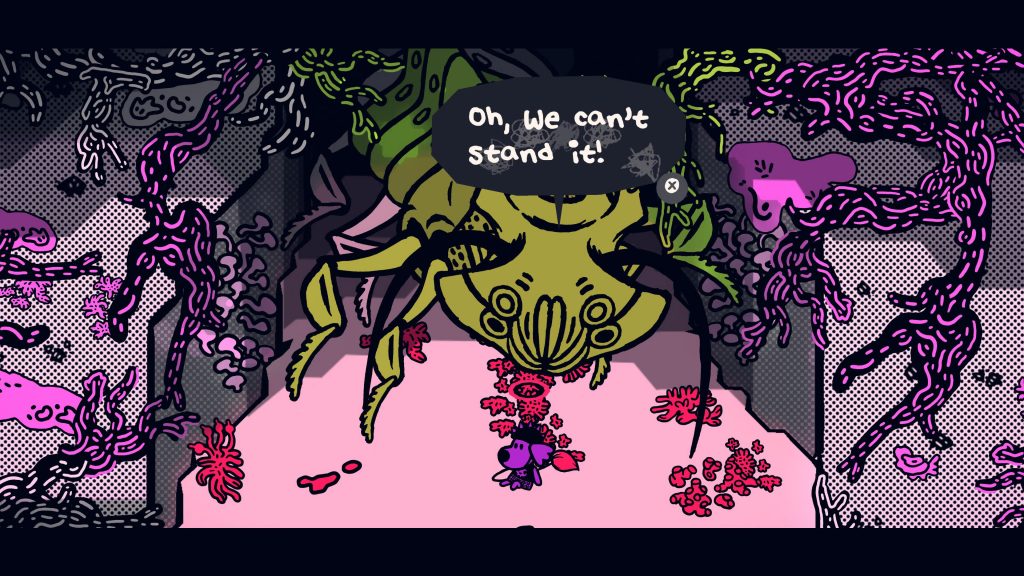 You might find yourself struggling on occasion, but in the event we did so, we were often just overthinking it. Yes, it could use PS5 haptics beyond rumble, but to be honest, it seems churlish to criticise it on that basis. Chicory really isn’t the sort of game you want haptics to be front and centre.

In conclusion, Chicory: A Colorful Tale is a fantastic ARPG with wonderful art style, fantastic music and an very well written plot that tackles some thorny issues such as self-doubt and identity. We can’t recommend it enough.

Chicory: A Colorful Tale
9 Overall
Pros
+ Beautiful art and wonderful music with instantly recognisable themes even when heard out of context
+ Lovingly crafted design with so many deft touches and painting is a frequent delight
+ Exploration is a delight, especially as you unlock more abilities
+ Bosses are forgiving rather than roadblocks
+ Topics such as nagging self doubt and the very core of identity are deftly handled

Cons
- Fast travel mechanic comes maybe a little late in the day
- If you’re unlucky to be labouring away with a base model PS4, you may struggle
- Maybe some of the themes might be a little dark for younger co-op players
- PS5 haptics are barely used

Summary
Chicory: A Colorful Tale is a frequent delight. It’s probably one of the better games we’ve played this year. This from an indie. Forget Ratchet and Clank, fun though it is. Chicory is possibly our favourite game this year.