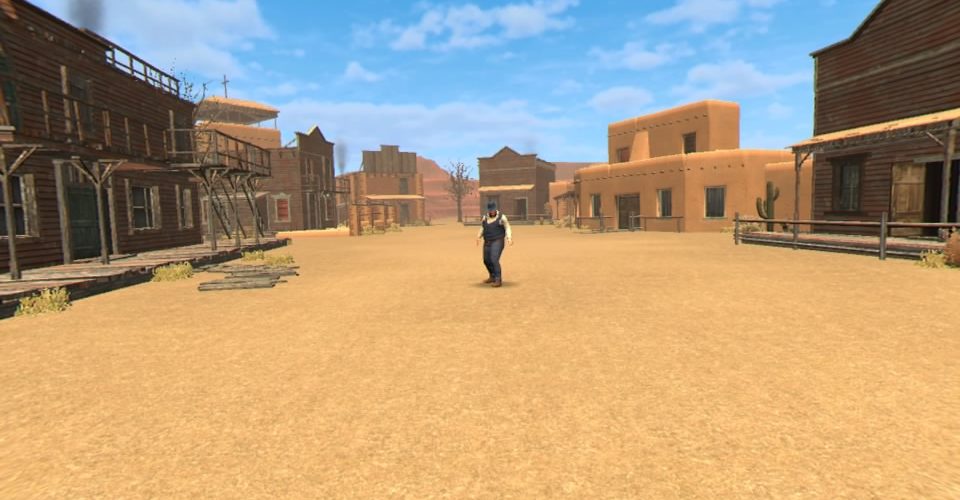 From the small indie studio Catch & Release comes Cold Iron, a ‘puzzle shooter’ for PSVR. “Gareth, what’s a puzzle shooter when it’s at home?” I hear you ask. I’m not sure but I can tell you all about Cold Iron. 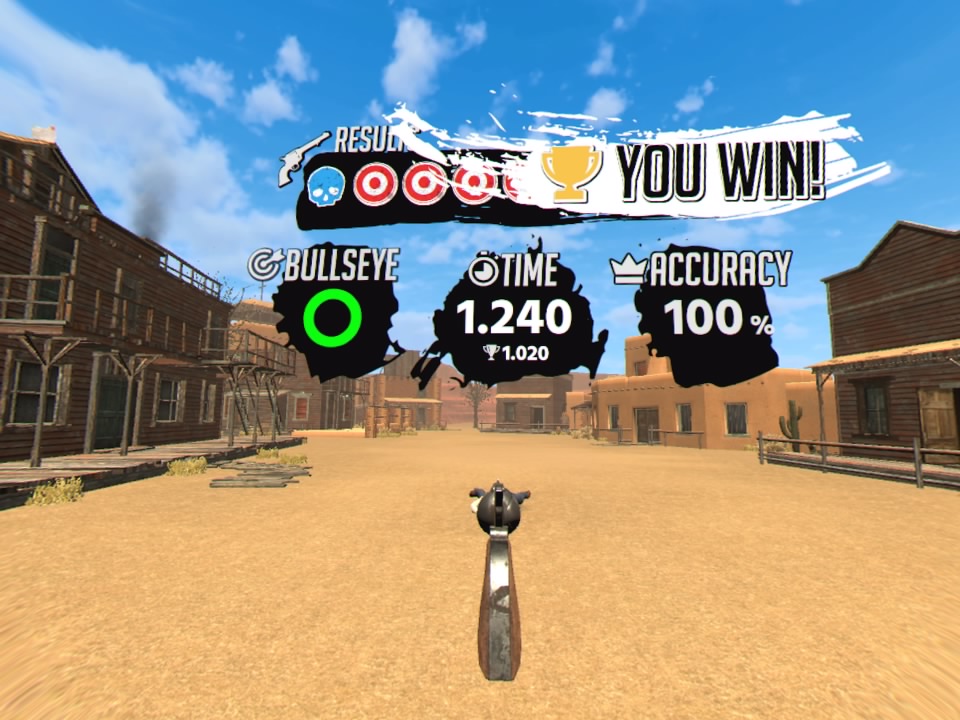 In the simplest terms Cold Iron is an updated version of Wild Gunman, the game Marty McFly plays in the retro diner in Back to the Future 2. You stand face to face with an opponent, gun pointed down, wait for the bell, then DRAW! Whoever lands a shot first wins, win five rounds and you move onto the next opponent.

You may be imagining a Wild West setting and initially you’d be right. Your father has killed a lot of people but gave up that life when you were born, burying his pistol. Three men come and murder him, ransacking the place but taking nothing. You know what they were after. You dig up your papa’s pistol, Cold Iron, and set out for revenge. Those three cowboys are your first targets.

Cold Iron isn’t story heavy but each chapter has a cutscene after it which is presented with colourful line drawings and narrated very well. You get your revenge early, so the rest of the game is a journey led by Cold Iron itself. The method of transportation seems to be teleportation so the locations don’t need to make much sense, but what they do is provide some variety in the visuals and the gameplay. 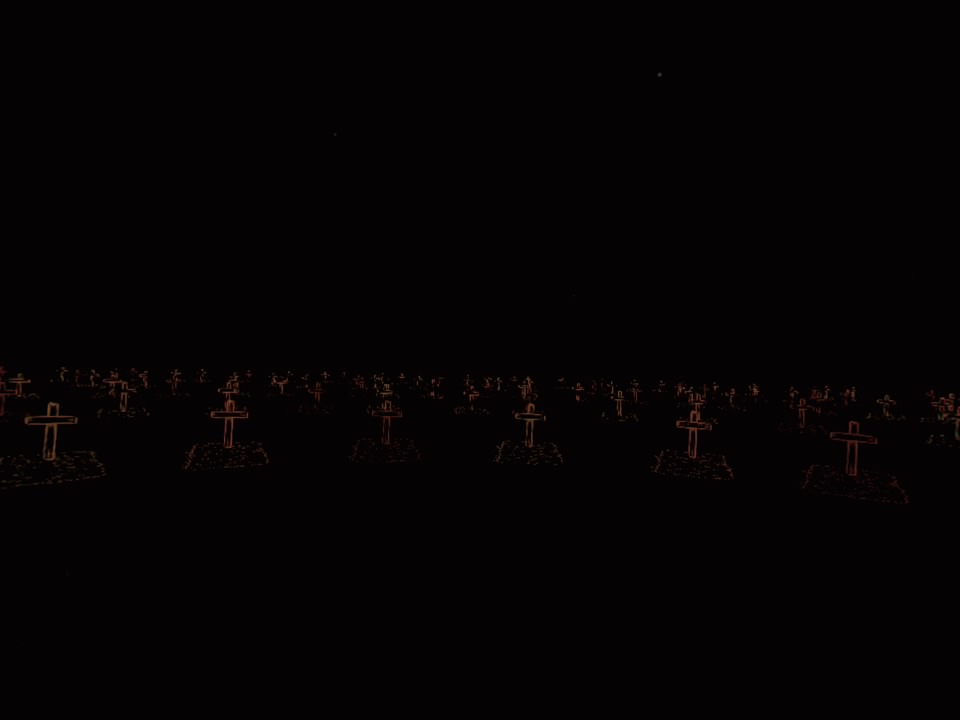 The rules always remain the same. Gun down, wait for the bell, shoot first. Your opponents are what stop this from becoming overly repetitive. The first three guys are pretty simple and similar. The third tries to fool you into drawing too soon by whistling before the bell. Quickly the game mixes things up however. The next stage is in a forest where you fight magical creatures. This means they can teleport around before the bell so you need to be aware of where they’re going to finish up as well as being quick on the draw. Similarly the boss of this area clones himself, but with slight mistakes each time so you have to figure out which is the real one before taking the shot.

It’s these elements where the ‘puzzle shooter’ label comes from I assume. Yes you have to shoot and be accurate but it’s not as straight forward as killing everything that comes your way like a lot of VR shooting galleries. Figuring out what you need to do to defeat each enemy is fun, though once you ‘get’ it it’s generally pretty straight forward, only a few enemies change things up on you. I have to say the third stage was probably the highlight for me, set in the ruin of a modern city. Without spoiling too much there’s a fight reminiscent of Metal Gear Solid and one that makes you rely on your ears, not your eyes, to make the shot. It makes you feel pretty cool.

Each stage has three opponents and you have to defeat all three to progress, lose and you start from the first enemy again. After each stage is a bonus round where watermelons packed with fireworks are launched into the air and you have to try and shoot them all. There isn’t really any reward for doing so other than the in game trophy system (which ties into the PSN trophy system) where depending on how you do you get a bronze, silver or gold statue at the end of every stage. Doing pretty well – not losing a round, being quick and having high accuracy – will net you an A (silver) but to get the gold you’ll need to hit your headshots, getting you bullseye bonuses. 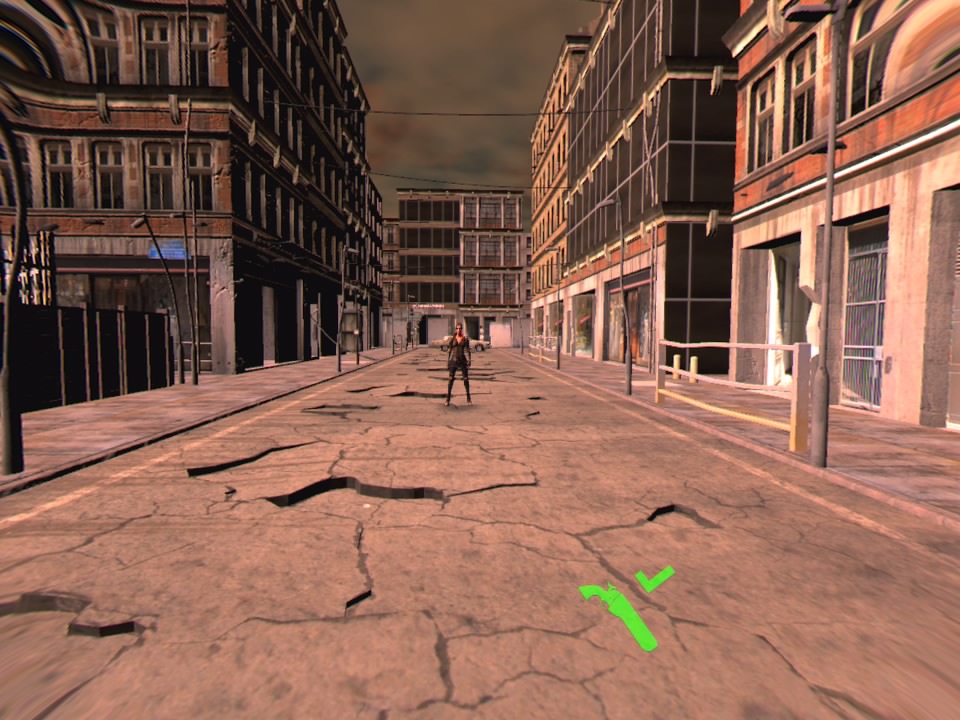 There are only four stages altogether and you can run through them in under and hour, depending on how stuck you get. On my first run through I only lost once, which is annoying as there’s a trophy (in game and on PSN) for not dying at all in a single playthrough. It did mean I played through the whole thing again however which extended the life of the game. You can replay chapters individually to get better grades, though you can’t tackle individual opponents annoyingly so if you want to fight the third person on a level then you have to fight through the first two people beforehand each time. Getting silver on all the trophies in the game (including some secret ones) will open a door in the main menu. I won’t spoil what’s behind the door but if you guessed there’s some kind of shoot out then you’d be right.

I haven’t really mentioned how it plays as Cold Iron is quite a simple game. You need one Move controller and it’s just a matter of pointing the gun downwards to holster it (it doesn’t have to be by your side so you can point your arm straight at your opponent but with your wrist pointing down if you want). The gun feels accurate but as you’re only generally taking one shot it can be hard to tell. Enemies only have two ‘death’ animations, one for a headshot and one for anywhere else, so you’ll know you’ve hit them but won’t know exactly where. More feedback on that would be nice as I’d like to see how close I was to a headshot or whether I pulled the trigger too soon and ended up shooting them in the leg. It reminded me how Virtua Cop on the Sega Saturn had location specific reactions and Cold Iron would have benefited from someone holding their wrist, leg or stomach depending on your accuracy.

Headshots seem either overly easy or very difficult depending on the enemy and I believe I’m simply not being accurate enough, but there are no tools for getting your eye in. A target practise would be nice so you can get a feel for the gun and know where to line up the sights. In a game where you fire off multiple bullets you naturally get a feel for where your shots are going but in a single shot game with little feedback, even after playing through it twice and replaying levels, I’m not sure I’ve fully got to grips with it. Combined with the need to shoot enemies in under a second more often than not makes the act of landing a hit less rewarding than it could be. Knowing I’ve hit the enemy right between the eyes should be celebrated, hitting them in the groin should be funny and I should know I was lucky if I simply grazed them. An X appears in the location if you miss so having one appear where you hit seems doable if nothing else. 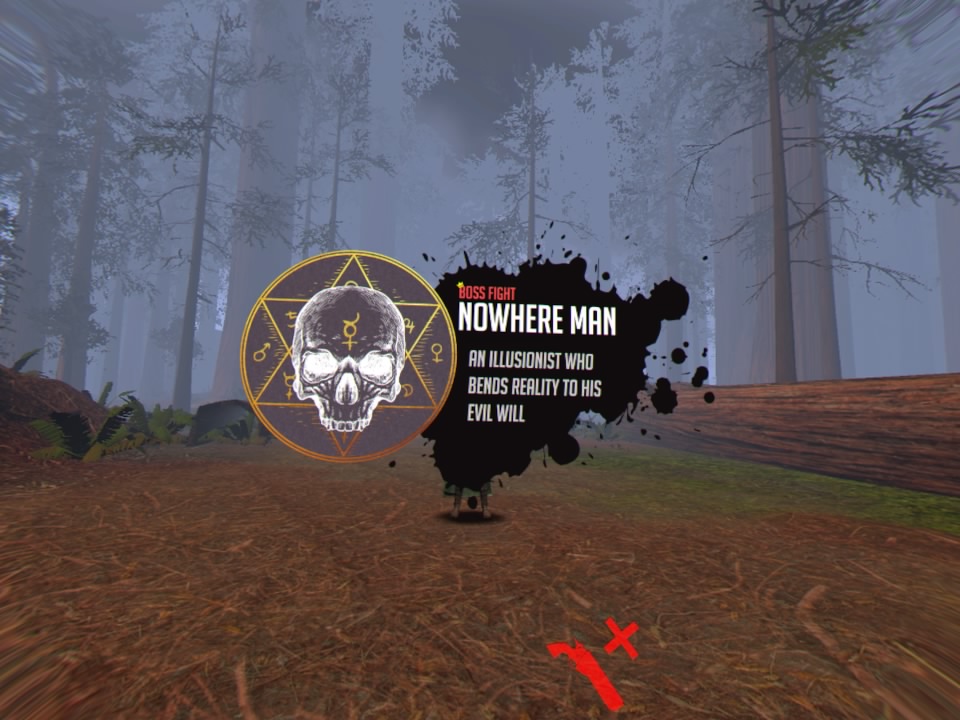 Cold Iron is a different type of shooting game for VR. Slower, slightly more thought involved, it rewards accuracy and speed and encourages replays. It is very short however and there are elements that could be improved such as feedback on your shots which would in turn help you to adjust your aim. I’ve certainly enjoyed my time with it but I think the price is maybe a little high for what’s on offer here.

Cold Iron
6 Overall
Pros
+ A different type of VR shooter
+ Variety in locations and enemies
+ Good replayability
Cons
- Not enough feedback on your hits
- Very short
- Gameplay never changes
Summary
Cold Iron takes the waves out of VR shooters and pits you mano a mano against a variety of enemies in a quick draw contest. It's a little short and the feedback on your shots could be improved but while it lasts it's an enjoyable game that offers some replayability and a well told story.