Codemasters have been producing racing games for decades now and it’s fair to say they’ve managed to carve out a reputation as a safe pair of hands. 2015’s DiRT Rally was a foray back into the rugged wilds of rallying without flashbacks and delivering a stern driving challenge. Now a sequel has arrived without the need for an early access test chamber. 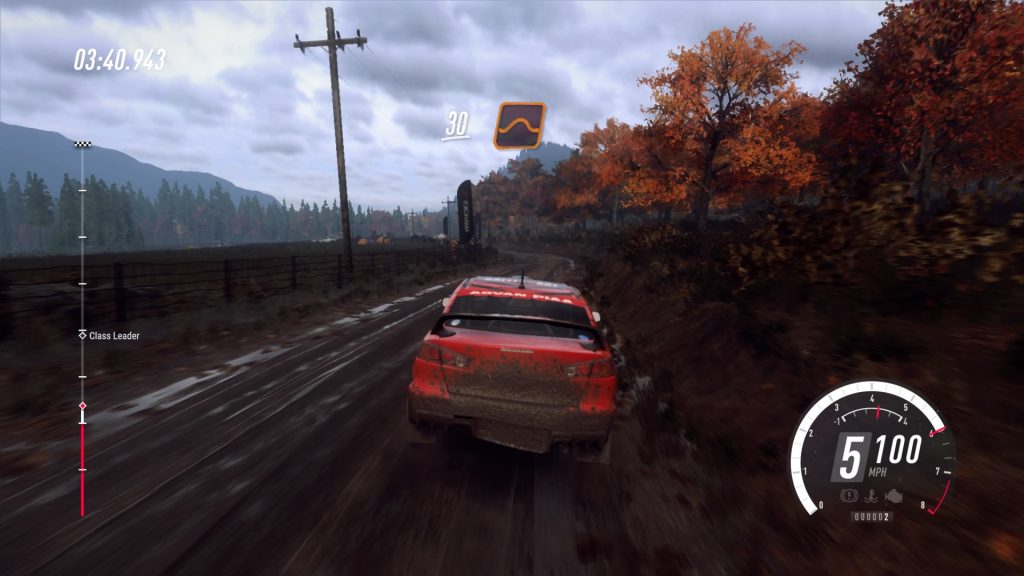 Dirt Rally 2.0 follows in the tyre marks of its lauded predecessor. Presenting a challenging, more authentic rally experience, you’ll be tasked with tackling stages with caution and precision. Practice makes perfect when learning each of the game’s bespoke stages and surfaces. As a result, a level of focus is required as you listen for Phil Mills’ pace notes, read the road ahead and judge when it’s safe to push. It takes a disciplined mind and it’s what draws me to the sport. Making it cleanly through a stage feels like a well-fought victory in itself.

Unlike DiRT 4‘s procedurally generated stages, DiRT Rally 2.0‘s more designed courses hold more character and a larger sense of place. Each of the game’s six rally locations seem to have a preferred surfaces, environmental hazards and motifs. Argentina’s rocky expanse can look like a claustrophobic, dusty canyon whilst Poland delivers a more familiar tarmac event that tears past fields and forests. The list does feel initially slim and the offering of 11 stages to each locale means you’ll repeat them often. Despite this, I enjoy taking them on and they do allow for me, as a driver, to spot landmarks without the road just blurring into a haze of deja vu. 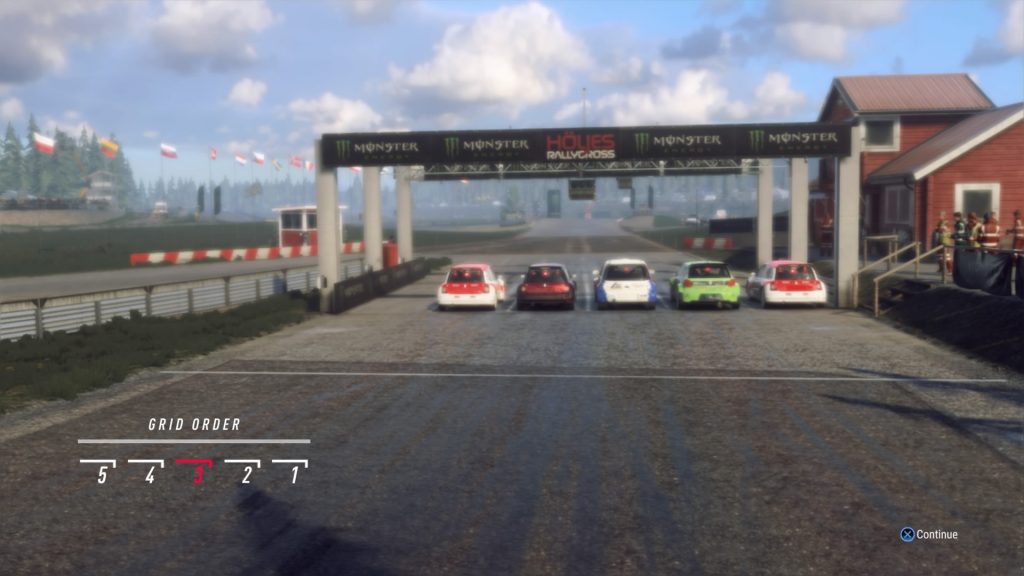 In true Codemasters tradition, weather adds a further thing to consider. Understanding how different surfaces transform under downpours and how your car is unsettled by a wet surface is fascinating to figure out. Unfortunately snow doesn’t make an appearance which disappoints me. There’s a couple of dusty locales that cross over and another weather type might have helped provide some more variety.

The physics model remains robust and you receive predictable feedback from your tyres and the car’s shifting weight. The historical Lancia Fulvia feels planted, underpowered and fairly pedestrian but, as I moved up the car list, I needed to consider more responsible throttle control and careful use of the handbrake. Cars with different drivetrains offer more considerations. The Porsche 911 delivers all its grunt to the rear and you certainly feel that. The fabled Group B selection is terrifying.

Codemasters have acknowledged their tarmac physics aren’t where they need to be. As a relative layman, I’ve not picked up on it but anyone with a sim-racing background might be irked by the car’s odd tendency to slide at low speeds. I will say that, whilst the stages do become familiar, track deformation works well as the events progress. Finding the ruts left in the mud from earlier runners really upset my vehicle and provided for a perpetually bumpy ride. It makes each stage feel more dynamic. 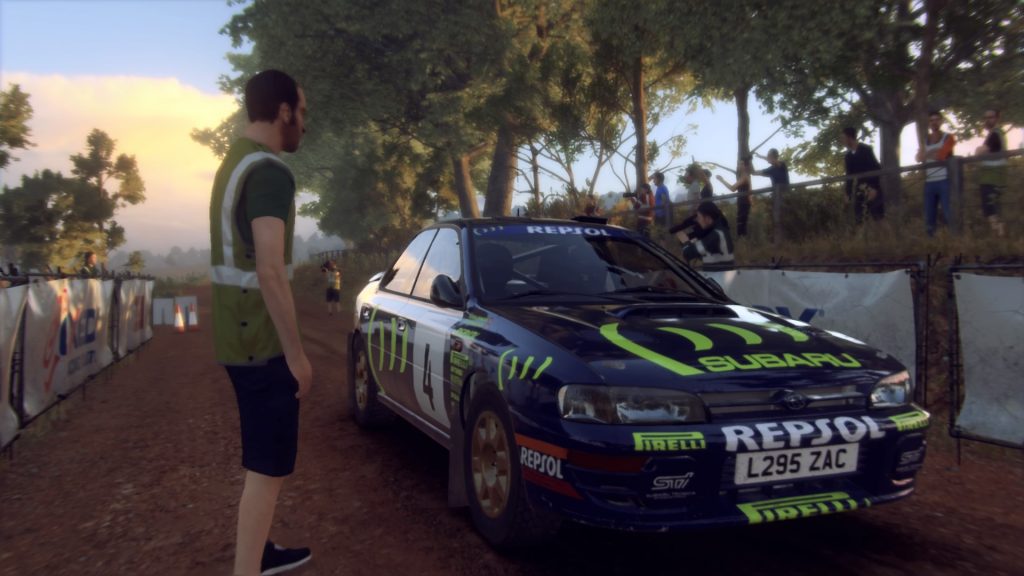 It goes without saying, this is a great looking and sounding effort. Roadside details are nicely rendered, car models are accurate and stages feel alive with activity. Australia’s nightly excursions are invaded by drones, helicopters hover over Rallycross circuits and your tyres dig into dirt in a believable way. Puddles reflect and pool nicely and, whilst some of the rain effects look a little odd, they pull together to look outstanding. Engine notes roar, pop and misfire and damage can certainly be heard as bodywork flaps and drags. Phil Mills has been put to work and provides a believable stint as your default co-driver. He shows fear when you’re tearing through the scenery at speed, although his pre and post-race banter is too often repeated.

If there’s one thing were the authenticity is lacking, it’s damage. There is a hardcore setting which attempts to deliver something closer to reality but, for the most part, bumps and scrapes feel forgiving. Hitting a tree at speed should be terminal but this default damage model feels generous. It’s so out of place and, whilst you do incur lost time for the mistakes, it doesn’t hurt your vehicle or wallet as much as it should.

Modes remain much the same as last time. Your single player content consists of standalone rally and rallycross championships and a rather slim career mode that deals in both disciplines. With that, you begin at the bottom of the difficulty ladder in a starter car and effectively play your way to a level that suits you. Sadly, there’s no way to circumvent this early grind with difficulty options only being available in custom events. That’s frustrating for anybody wanting their experience with the genre to count for something and gain a head start.

There’s five difficulties to chase in total with the AI starting to really oppose me at Professional level. You effectively seek promotion to the other settings from podium finishes and finishing in the bottom three sees you demoted. It’s an interesting system that, at times, feels active but there’s not enough content here to make it feel like a journey. 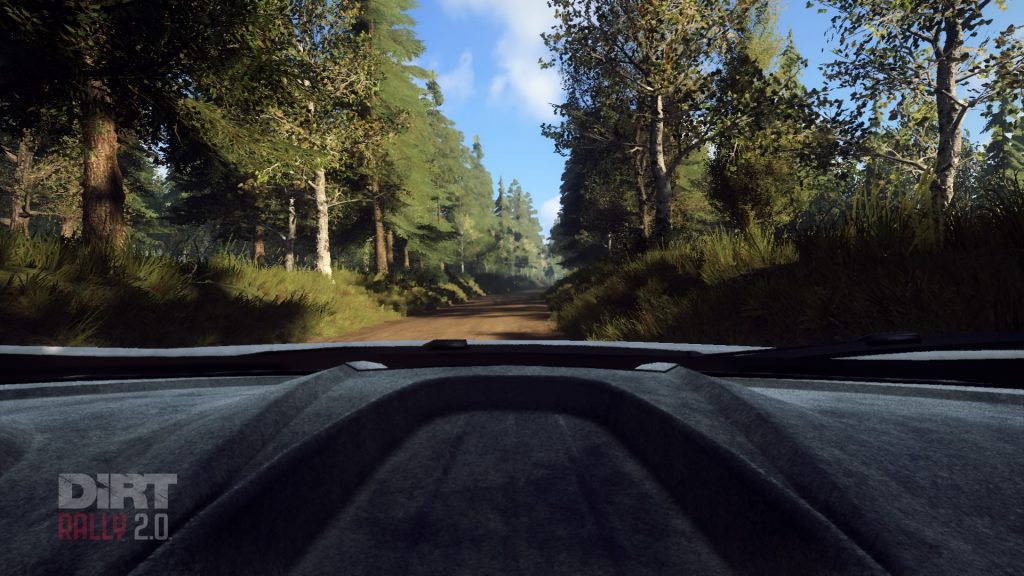 You have daily and weekly challenges to sink time into but the live nature of these events mean a server going down can rule almost all content out of action. There is nothing more disappointing to me than seeing single-player content locked away because it needs a server connection. Even the career garage which refreshes stocks regularly, communicates with RaceNet. If that’s down, you’re not going anywhere.

I wish there was more of it but DiRT Rally 2.0‘s core physics and driving experience remains thrilling. They do a lot in the pursuit of realism which makes certain omissions stand out more. I understand more is coming as downloadable content but I’d rather they didn’t cast aside the first game’s content, particularly given how much of a live service this is trying to be.

DiRT Rally 2.0
8 Overall
Pros
+ Fantastic, realistic physics.
+ Beautiful stage design.
+ Success feels very rewarding and requires real focus.
+ Excellent sound design.
Cons
- The default damage model is too generous and forgiving.
- The career mode feels slight and requires a lot of grind to find a level you're comfortable with.
- If RaceNet goes down, you're not driving anywhere.
- Stages start to become familiar all too soon.
Summary
It may be a little slim on content but time behind the wheel in DiRT Rally 2.0 feels as rewarding as ever. It's gorgeous to look at with a lot of attention paid in the right areas. Some might worry about the always on nature of the servers but hopefully they can remain reliable. There's a solid selection of stages and vehicles and a physics engine which is exquisite. I can only hope they add more to it.