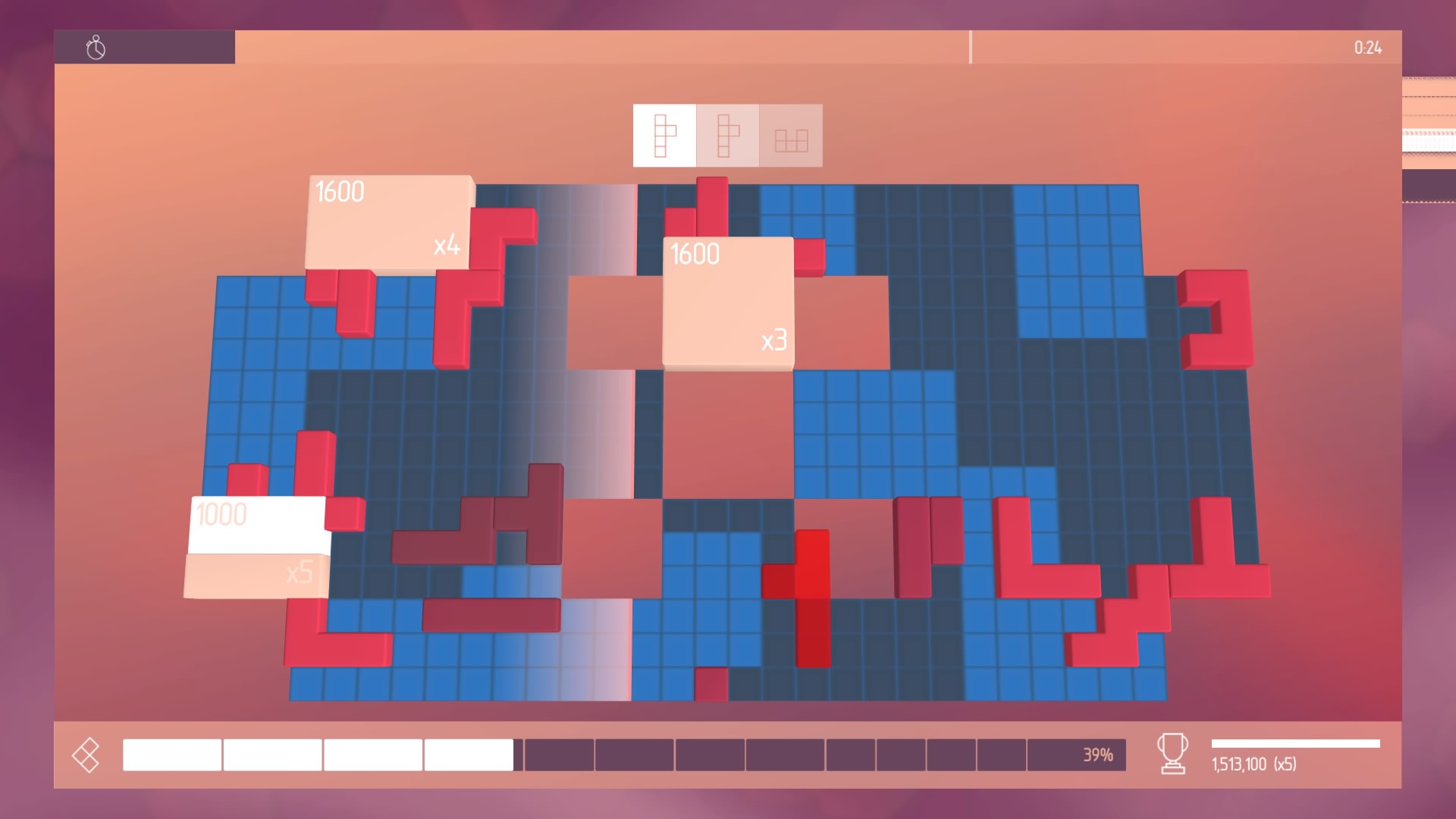 Chime was a very important game to me.  It was, by a margin of a few hundred hours, the game I played the most in the previous generation of gaming.  It was my go to game whenever I wanted to just relax and I eventually managed to turn a three minute game of it into a four hour, leaderboard topping record score before retiring it.  So when Chime Sharp was announced, as a Kickstarter for a PC, I backed it for quite a lot of money to say thanks for everything Chime had given me.

That pledged amount got me some postcards, a couple of badges, a rubbish little USB keyring and a copy of the game on PC (which never worked with my controller of choice – the DualShock 4).  What I did play of the game disappointed me for reasons that still bother me now on this PS4 version of the game.  So, the PS4 version dropped a week or so after the surprising announcement that it was coming to consoles and, believe me, I was very keen to get involved and see if things had improved. 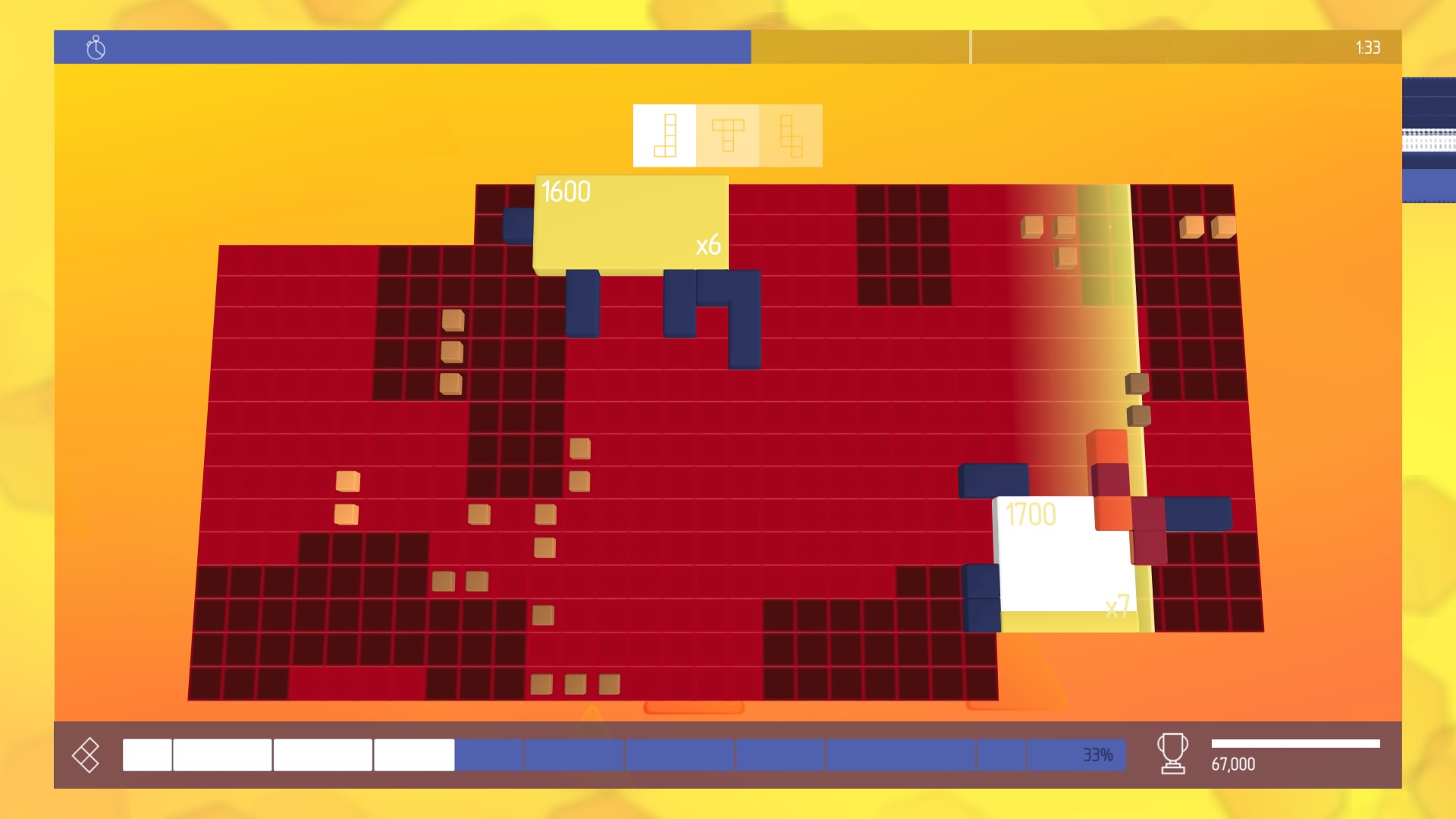 The problem with reviewing puzzle games is that you spend half the review explaining the mechanics of it but you kind of need to here as the game doesn’t explain itself well.  If you take Tetris as a comparison, here you have shapes made of five blocks (rather than Tetris‘ four) and you need to group them together on a board (wherever you want, there’s no gravity here) so that you create solid blocks of at least 3×3.  Manage that (or a larger square or rectangle) and the created shape will be cleared away, colouring the background.  Fragments that weren’t part of the 3×3 (or more) shape are left behind, complicating things a little.

That’s a simple explanation but yeah, Tetris without gravity.  But better.  So much better. 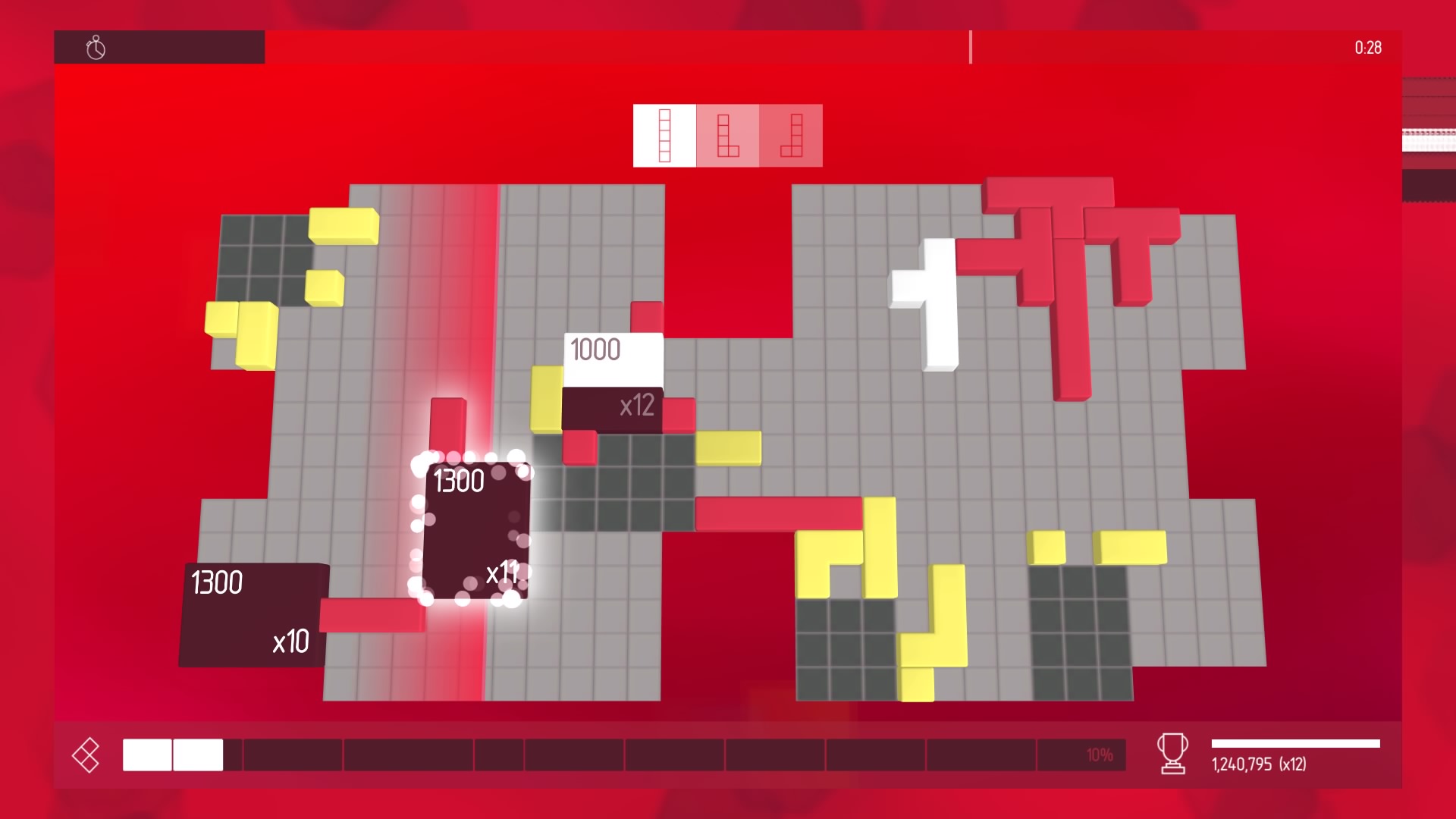 The gameplay is as it was in Chime.  The only difference is that where as you could play endlessly in Chime‘s one mode, here all the modes are capped in one way or another, making for easier to digest play sessions.  This is a good thing.

For that alone, this game would be worth a solid nine to me, because I’m such a fan of the core gameplay.  But from this point of the review on, I’ll be telling you why I didn’t give it a nine.

Chime had a nice, elegant interface.  The screen was mostly black and when you filled it in, the fill colour was red or purple or whatever.  On Chime Sharp the colour combinations are horrible.  Dark blue gets covered by light blue, light green gets covered by dark green.  Far too many times I wasn’t quite sure which part of the board I had covered and ended up starting every round working the bottom left of the screen so that I could refer to it if I got confused. 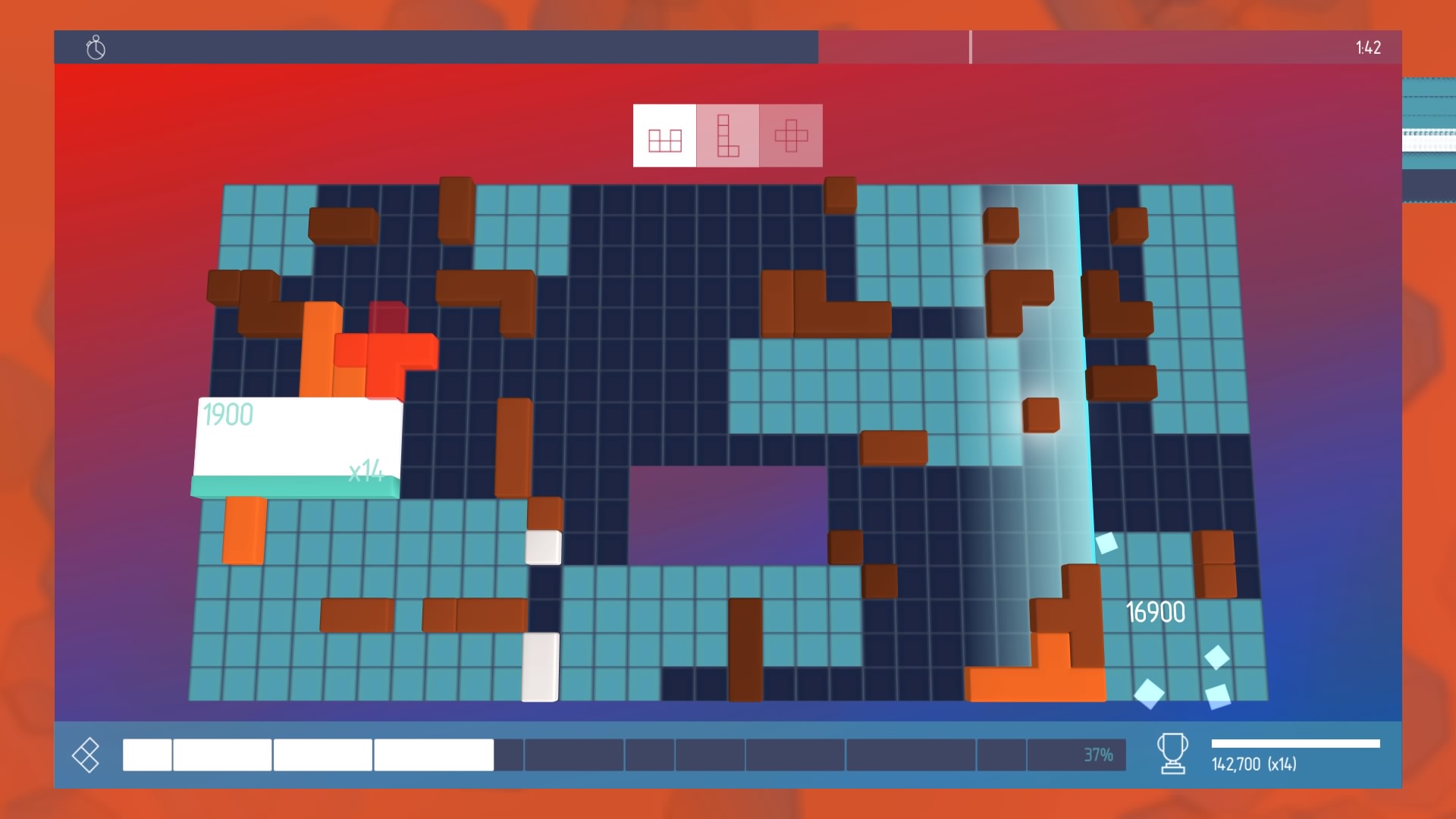 Likewise, the board has a slight faux-3D thing going on.  It looks nicer than Chime did but it harms the playability by a slight amount.  Not enough to bother most players but when you’re challenging the top of leaderboards, it has a negative effect.  Also, the next piece indicator is much harder to see in-game than it used to be and takes away a large part of my game when I’m playing.

Another thing that bothers me is that you can’t see your overall coverage.  You can see you current screen’s coverage (as a percentage) but I want to know my total.  It doesn’t tell you that and it annoys me.  All of this annoys me because it was all feedback I gave during the original beta for Chime Sharp. 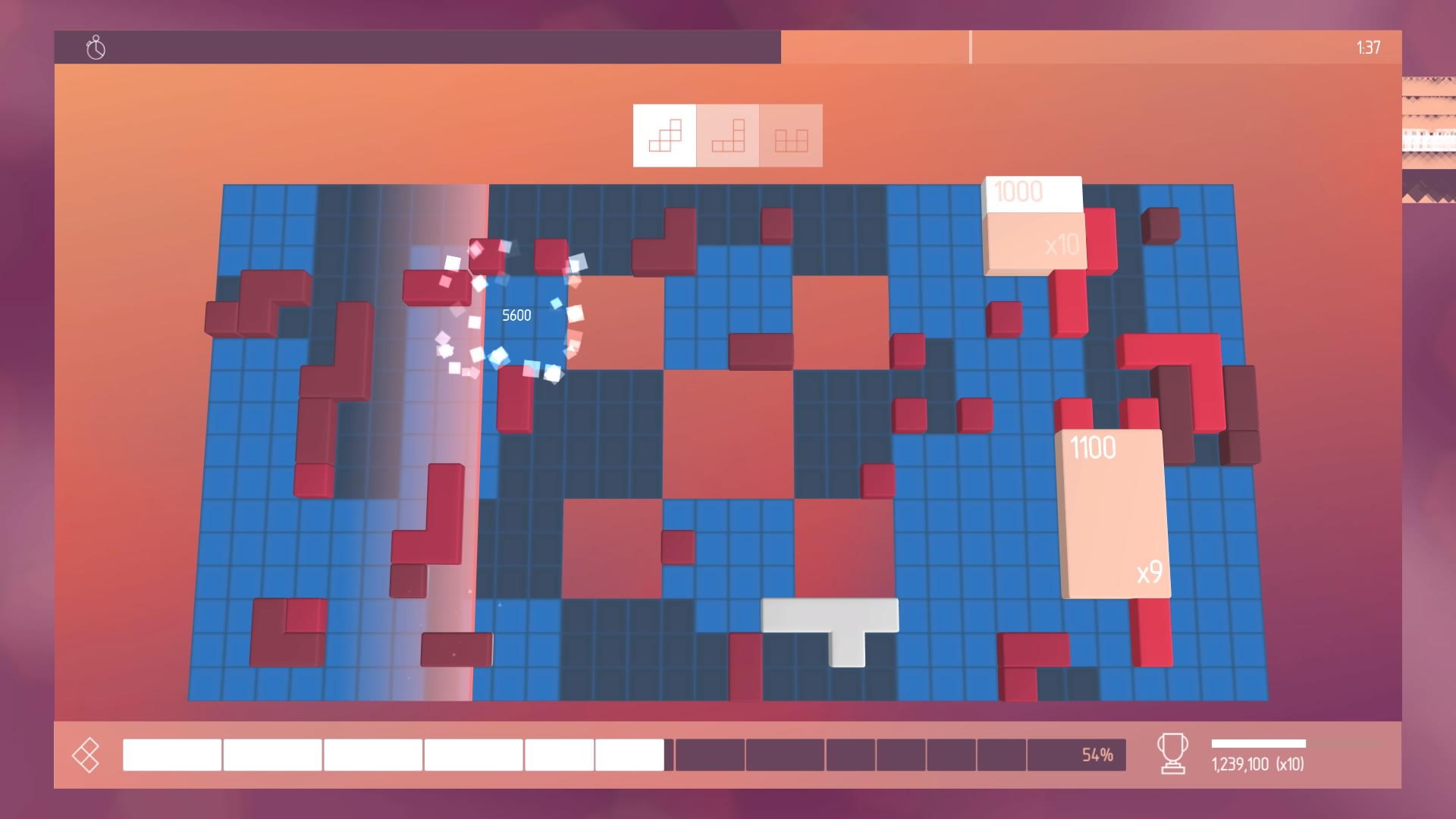 Chime has always had a strong relationship with the music.  The original game had five tunes (five levels) where as this has sixteen.  So that’s good (even if none of it seems to be as iconic or good as the original soundtrack but you may disagree).  New levels are earned by completing other modes on other levels.

In terms of the modes available you have Standard – which gives you five slightly varied screens on the level that you are playing.  Get to 90% and you unlock the next screen (you’ll also have a few seconds to try to get up to 100%, which in my opinion is a mistake as they should have just let you play within the time limit) – as well as Strike, Sharp and Challenge which are all shorter, more technical modes.  It’s a shame that Standard mode just kicks you onto the next screen in such an arbitrary way as it seems to bring up some OCD in me.  There’s a trophy for clearing all five screens completely but so far no one has managed this and there are some great players out there.

With all that said, Chime Sharp is still a very good game.  I feel a bit wounded as a fan but I can still see the good in it.  It’s like how you felt when you played Resident Evil 3 probably.  It’s a shame that they’ve valued presentation a little over pure playability but this still beats all other puzzle games on the systems hands down.

Summary
As a bit of a super fan of the original, Chime is overly familiar while being ever so slightly worse thanks to visual improvements that slightly mar the gameplay at the highest level. The additional modes, and number of levels, offer a fleshed out package though and Chime is still the uncrowned king of the genre as far as we are concerned.