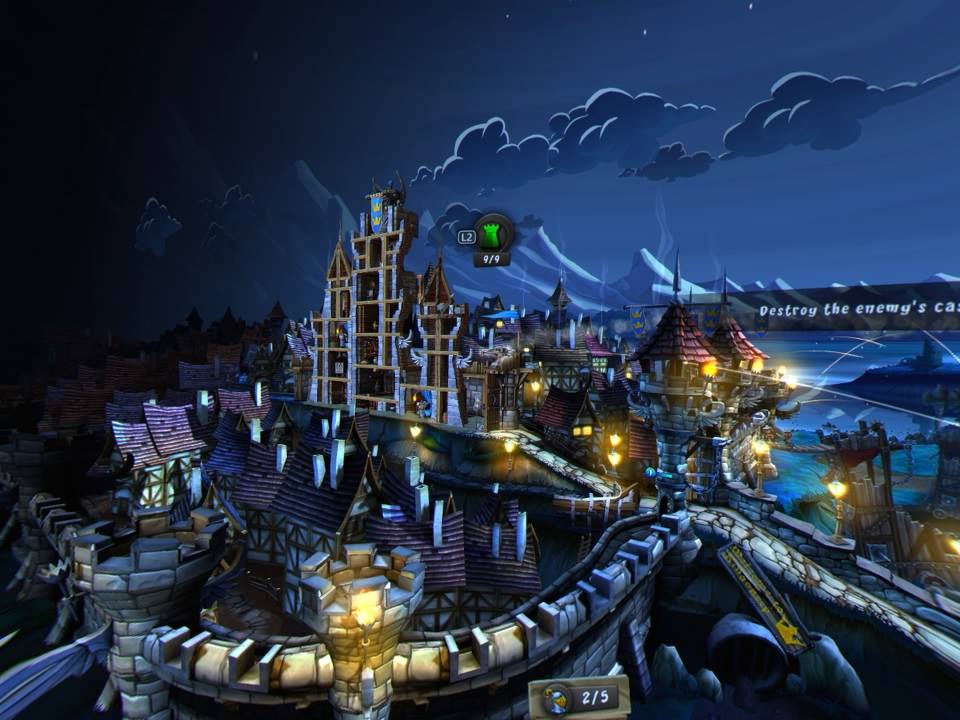 CastleStorm is nothing new at this point. Originally releasing in 2013 for the previous generation and later mobile, it blended real time strategy action with a ballista mechanic that aped Angry Birds with pleasing results. The definitive edition of CastleStorm arrived on PS4 originally in 2014, which featured all the available DLC and graphical trinkets to freshen the game up for the new generation. The VR Edition,  is a standalone from the definitive rather than simply DLC, so is the price of a full game justified for the mode?

Well, not particularly. The game still plays out on the 2D plane with the action unfolding in front of you. The VR head tracking simply adds the ability to look left and right to help you survey each castle. While this is nice, it doesn’t really sell the concept of VR and would just as easily (as proven with earlier editions) work without it. This is further compounded by the fact that the UI and cutscenes have not been touched in the translation or given aspects of 3D. This means that in game, the action bar menu is only visible when looking directly at it and when viewing cutscenes you are pushed into a virtual cinema where the action takes place in front of you. For a standalone title that asks customers the price of the full game, I find that a bit weak to be honest. 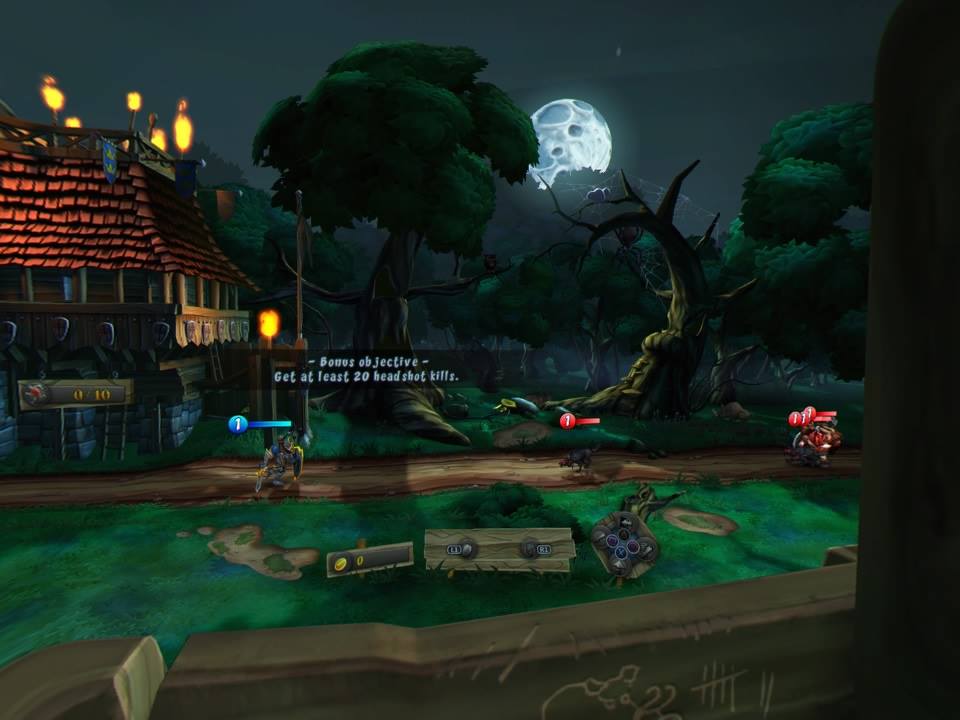 Questionable business practises aside, CastleStorm is still a good time.  The mix between Angry Birds and a real time strategy is well thought out and makes for some interesting dynamics throughout the various skirmishes and the story mode that makes up the majority of the game. In the story mode, you play as Sir Gareth (Either a fun coincidence or it dug out my name from facebook, either way i approve) who is tasked with defending a medieval kingdom against marauding vikings in a bid to protect a teardrop gemstone that wields untold power. You take control of a ballista that can be aimed using the left stick to shoot at your enemies with a variety of arrow types, this can be used to take out the enemy strongholds or troops as they march towards your castle. While doing this you can place troops, cast magic spells and even conjure a hero that you control on the battlefield.

As the story is essentially the training mode for survival and multiplayer battles, you are met with several different types of missions to play through. Some have your resources stripped back so you can only fight using the ballista, troops or hero while others have you controlling all aspects. In general, i preferred the moments where i was playing with only one of the approaches available as when everything is turned on it can be a bit hectic and difficult to keep up with. However each mode is pretty fun and the variance between each stage keeps things fresh. As you progress through the game you are granted with in-game gold that is used to fortify your castle and to fund different ballista projectiles and troop types, ranging from homing eagles to armoured paladins that march on your behalf. These unlocks are retroactive, meaning they can be used in earlier levels to help you achieve higher ranking scores or times, which makes for some good added replay-ability. 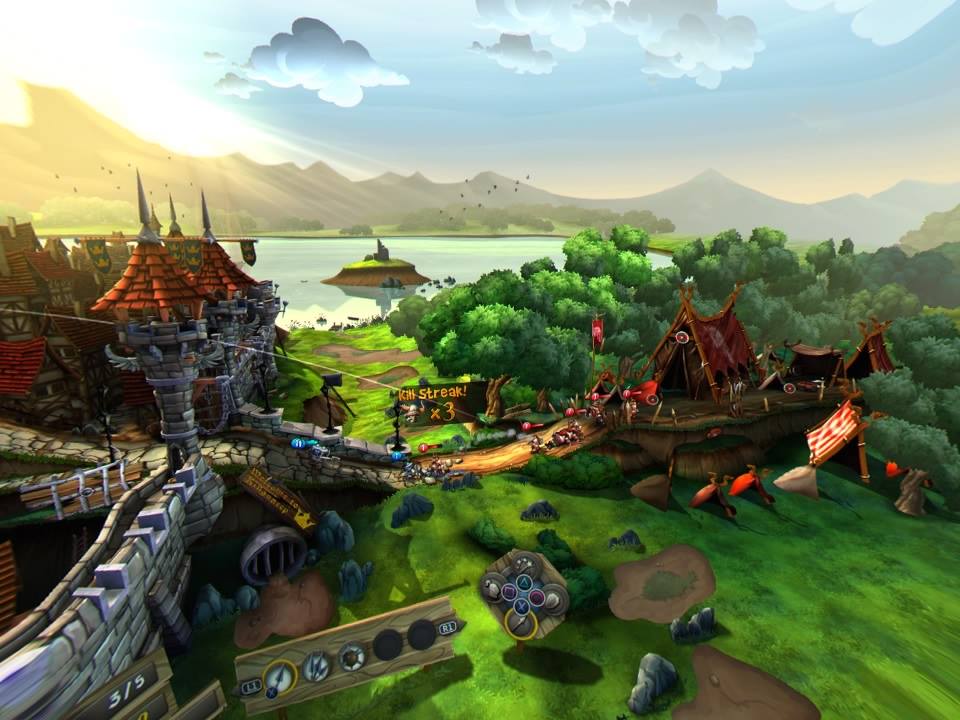 Not only are your troops and ballista load-outs customisable, but so is the castle you defend. In between rounds you can add extra levels and rooms to your keep in a building menu akin to the stage customiser in Worms. This offers an essence of strategy in itself, thanks to the placement of your rooms and turrets being vital to the battles that you face. Bearing in mind that once a room is destroyed, you lose the benefits of it so it is always ideal to make sure that these are protected as best you can. The problem i have with this however is that the interface is not the friendliest. Placing elements and rooms of the keep can be a fiddly affair and is obviously better suited to a touch screen or mouse control rather than an imprecise DualShock 4. However if you have the time and patience then this can truly make the game more interesting, even if putting all the best rooms in the back is the surefire route to success.

So the core gameplay remains present from the definitive edition, which is available for the same price. Ultimately it is down to you whether you think that the pseudo 3D viewpoint is worth putting on the headset for. To be honest however if i was to choose myself, it would be the standard viewing option as there really is not much to miss in the translation to VR. With that in mind, if you already own CastleStorm in one form, then remove two points from the score.

Cons
- The VR viewpoint is barely justified, should have been a standard game with VR addon really.
- Very cheeky to not make this DLC for the definitive edition
- Commanding troops, ballista, heroes and magic can be a bit fiddly
- Castle customising is far too time consuming between rounds.

Summary
CastleStorm VR’s gameplay is simple and has that one more go ethic that will appeal to some gamers. For those who haven’t played it on the previous generation, there is a fun and varied real time strategy meets Angry Birds formula that proves basic yet satisfying. However, if you have given CastleStorm a go before, then the PSVR implementation doesn’t really bring anything to the table and hardly warrants a double dip. Especially considering that the VR version commands the same price as the definitive.