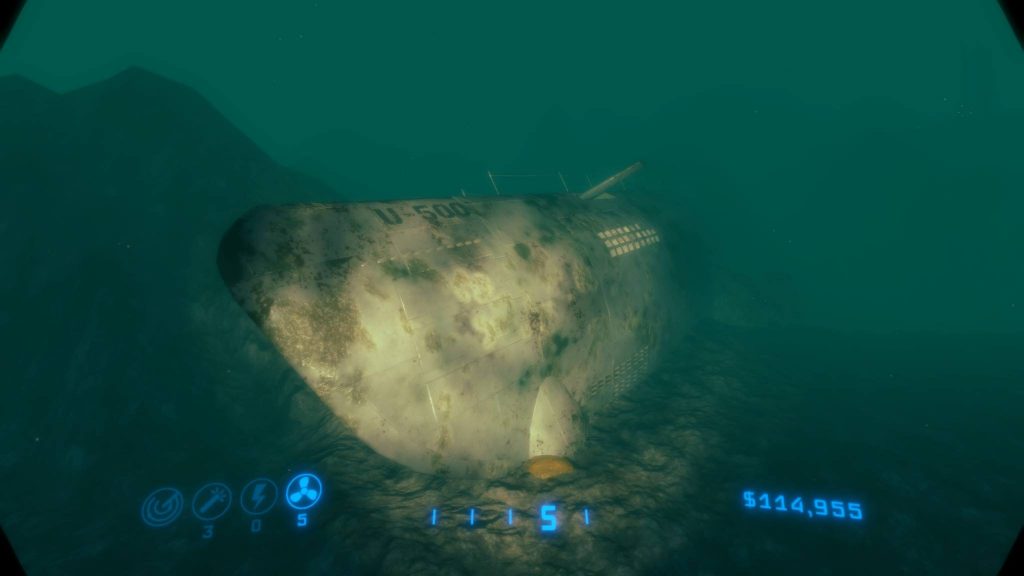 On paper, a deep-sea adventure title set in a bathysphere sounds like a pretty good fit for VR. That pitch alone suggests you will be encountering shipwrecks, relics of the past and aquatic life as you plunge through the deep blue depths. Or in this case, the dingy green and grey depths as Neptune Flux takes a bit more of a dystopian/ realistic approach.

You play as Sarah, you control a one occupant submersible and it is your job to fulfil odd jobs for the powers that be at A.Q.U.A, a deep-sea colony that exists below a war-torn surface world. Her mother went missing mysteriously a while back and Sarah is trying to get to terms with her life down where it’s wetter. Her life becomes a bit more interesting when she discovers clues to her mother’s disappearance among the debris and relics littering the sea floor. 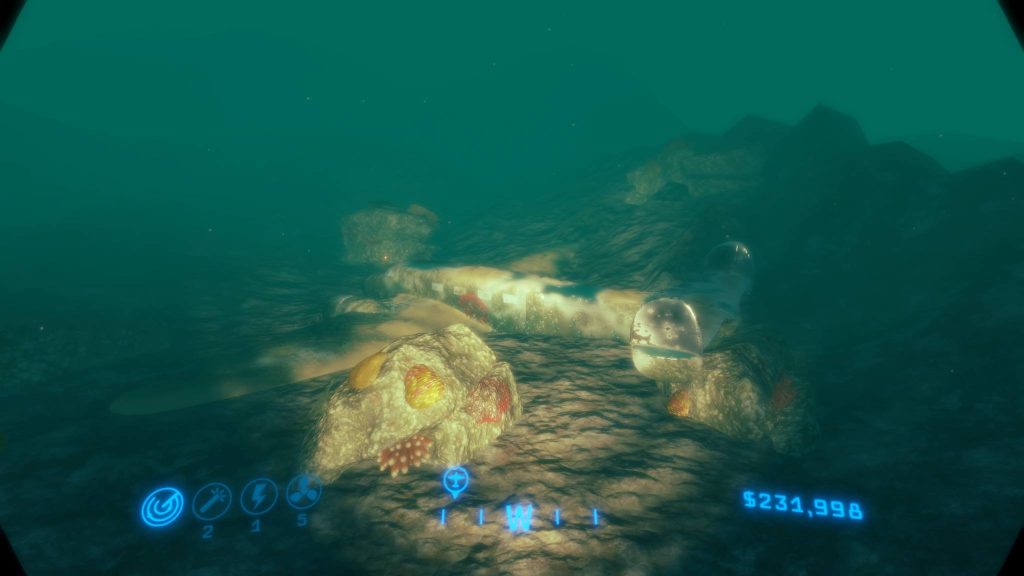 To say any more about the story in this review would take away from the narrative that unfolds, this is mostly because Neptune Flux is a very short game. Clocking in at just under two hours fully explored. This would not normally be a problem for us at PlayStation Country, we love short games here. However, when it comes to narratives and what you actually do in a game, we expect those couple of hours to be engaging and this is where Neptune Flux hits the middle ground.

While this may very well be another type of walking simulator, a floating simulator if you will, Zoxide Games have tried to add a few gameplay mechanics to keep things varied. However, these boil down to little more than what feels like an afterthought. As Sarah goes about her business, she can collect detritus and scrap from the sea floor to help fund upgrades and items for her sub. These include upgrades to the sonar technology so it doesn’t use battery power or consumable boosts to your speed. The problem with these though is that you only need two of the items and once they are purchased you don’t really need to scavenge more of the junk to get further in the game. It also doesn’t help that the scrap you find tends to magically reappear shortly after you previously collected it, making this part of the game less about exploration and discovery but mostly about time and checklist ticking. 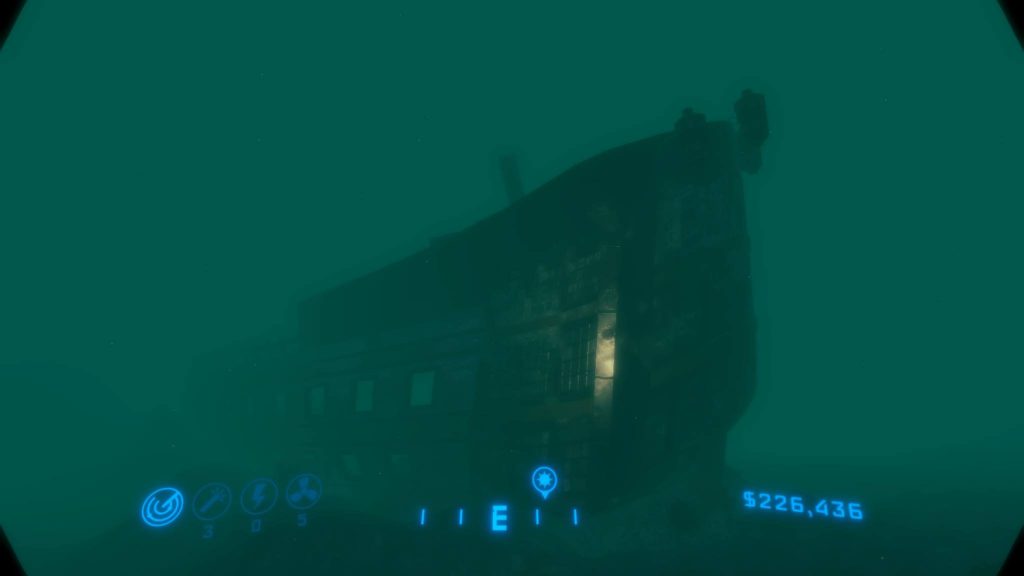 The reappearing scrap makes exploration a pain, but not nearly as much as the overall visuals of the game. The area surrounding A.Q.U.A is a dingy murk that is very difficult to penetrate visibly. Often when on an expedition it will feel like you are walking through a dark room with each thing you bump into being more of a mercy than a wondrous discovery. There is a way to combat this with one of the games essential upgrades of a new lighting array, but even then, it doesn’t really improve much visually. In VR this is particularly a pain with the addition of the bathysphere viewing window that overlays the otherwise full widescreen viewing panel. It constricts your view in the name of motion sickness reduction, but feels like a simple stencil over the screen. As a VR experience it lacks the sense of ‘being there’, and while you can survey the inner componentry of the submersible, the outer sea world loses all its depth thanks to the fact you cannot see more than ten metres ahead of you.

Zoxide has pegged Neptune Flux as an open world title about discovery. Personally, I would say that’s cheating a bit. While there is a relatively large space for you to float through, the seams are clearly visible. On two occasions, I was met with the very edge of the area in game and instead of being walled off or tapered out of view I instead found a jagged, unfinished texture with a window to the void underneath. While indeed, Zoxide probably never intended anyone to reach this far out of bounds, but this IS an open world game and that is something many will test to its limits. 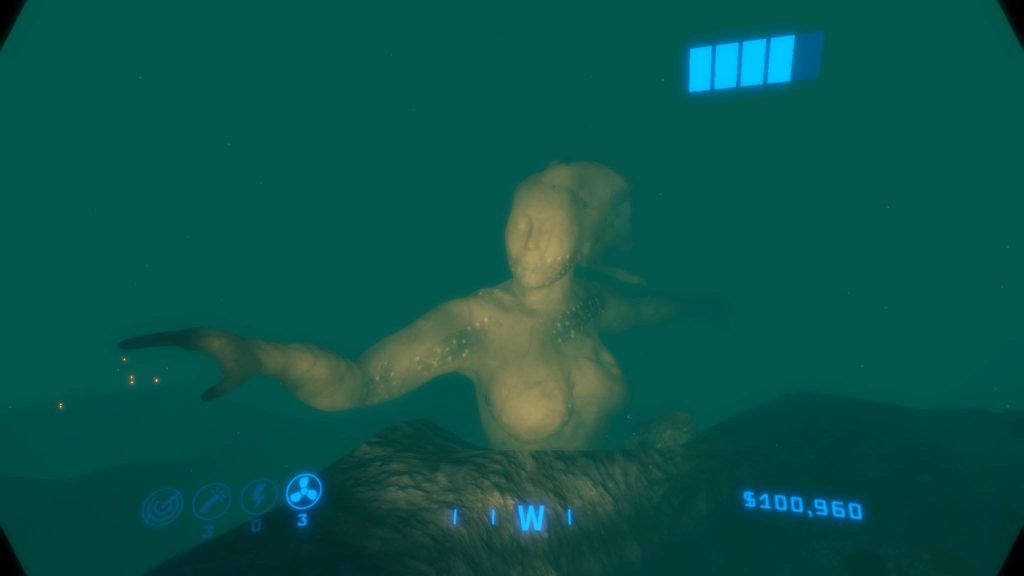 This would be less of a problem if these glitch errors only occurred in places that you weren’t really meant to see. But unfortunately, I also encountered these on some of the structures that were supposed to be big, wondrous discoveries that lead to interesting plot points. These are much harder to forgive, especially in such a smaller concise experience.

All in all, Neptune Flux just does not feel like a finished article. It’s possible that the games inception as a kickstarter that didn’t meet content stretch goals has something to do with that, but i will not go into that. What matters is what is here and unfortunately it just isn’t as interesting or as polished as it could be.

Neptune Flux
4 Overall
Pros
+ Some of the monuments that you discover look great on first viewing
+ There is one section that is neat in VR, however fleeting it may seem
+ Can be played in and out of VR (hence the better screenshots)

Cons
- The murky sea tinges everything, feels like stumbling through the dark
- The upgrade system serves absolutely no purpose
- The borders of the world aren’t all that well hidden
- Graphical glitches on structures suggest poor optimisation
- Not a great experience for VR overall
Summary
Neptune Flux is a short and not so sweet package. While it has decent storytelling and a premise that interests, for an open world title it simply feels too claustrophobic. There is some fun to discovering deep sea detritus and the puzzles surrounding them, but unfortunately whether it is because of the murky visuals or the extremely short playtime, there is just not much to see here.