Airheart: Tales of Broken Wings from Blindflug Studios has proven to be a difficult game to review. We were flying blind if you like. On the one hand, it’s a tranquil place to fly around and catch fish (yes, we know) and on the other it’s a twin-stick shooter with rogue-lite elements and unexpected permadeath.

Airheart’s setting is floating islands in the sky, not entirely unlike those in Dreamcast classic Skies of Arcadia or early Studio Ghibli anime Laputa. The aircraft bring to mind Xbox classic Crimson Skies too.

The name is a play on the classic female aviator’s surname of course. Heck, your character is even called Amelia. Sadly, we’d heard so little about it prior to release that this game may well disappear without a trace, just as she did some eighty one years ago. We hope it doesn’t though as Airheart is an interesting take on the rogue-lite format. 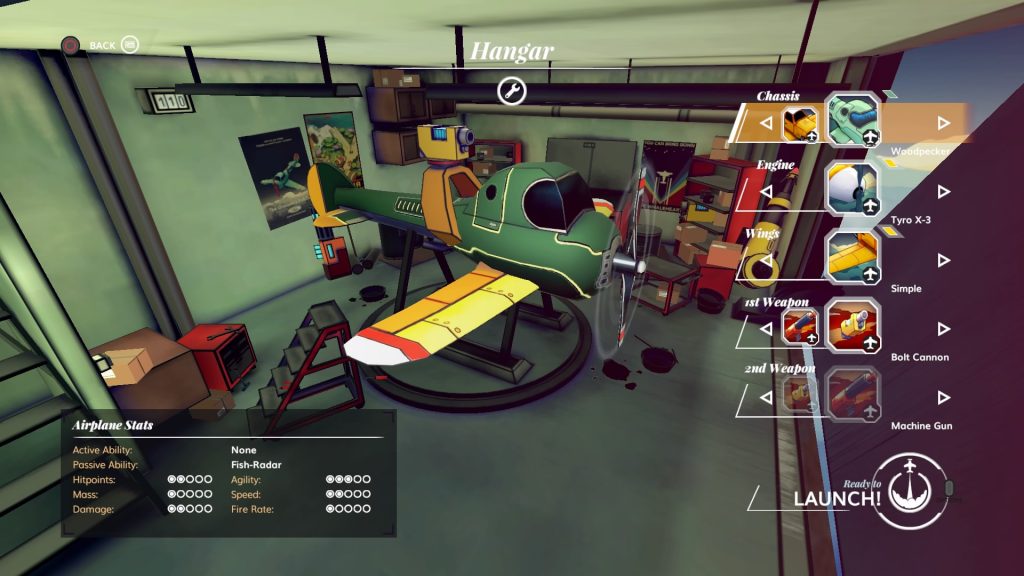 You start out on a hub island Granaria with a hangar, workshop and shop to spend your earnings in. This is your base going forward and all future missions begin from this point. The game world is made up of distinct altitude layers, with transitions to each being key to your progress through the game.

Your base lies in layer zero, with layer one being the peaceful tutorial area you’ll be gently introduced to the game’s mechanics in. Layer two is where the action really starts to happen as you’ll come up against rival pilots who’ll shoot on sight.

The base plane you begin the game with has a standard machine gun and not much in the way of armour, giving you twenty hit points to progress with. You’ll not last that long to start with as the minute you come up against stiffer opposition you’ll find yourself in a death dive. 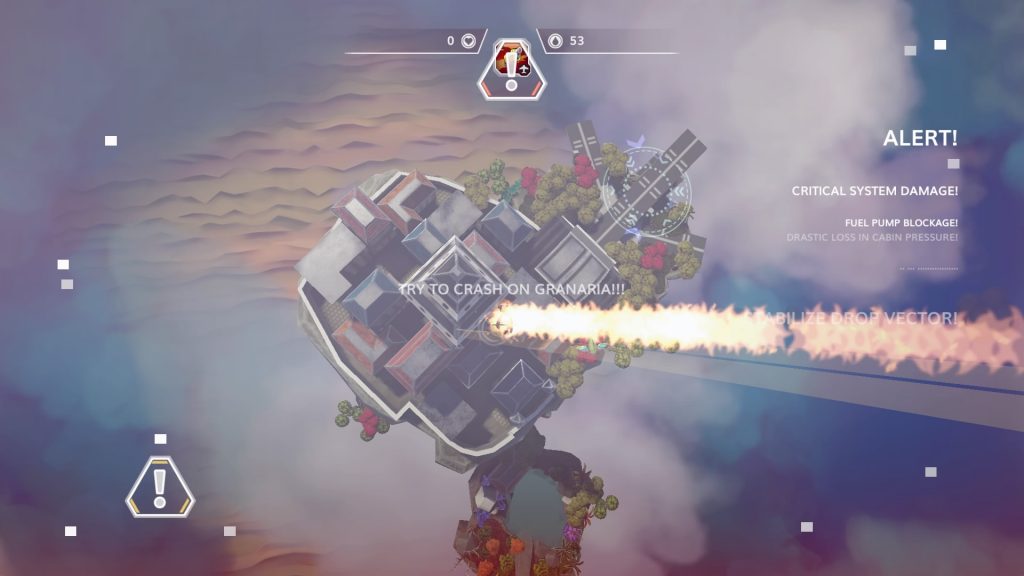 This is where the permadeath aspect comes in. You’ll be able to salvage the wreckage of your plane as you crash, but only if you land on an island in the second layer. If you miss, you’ll hurtle into the ground and you’ll get the Game Over screen. Save deleted, the lot. Thankfully we discovered this early in our initial playthrough, so we’ve only died once in this manner.

This gives you an intriguing risk/reward structure the higher you climb. Do you take a chance and climb to the next cloud layer and with it the risk of destruction? Or do you play it safe to start with and play around in the first few layers where the chance of obliteration at the hands of the enemy is greater?

The higher you ascend, the more complex the view gets as you see islands In other sky layers beneath you. It’s all very pretty. 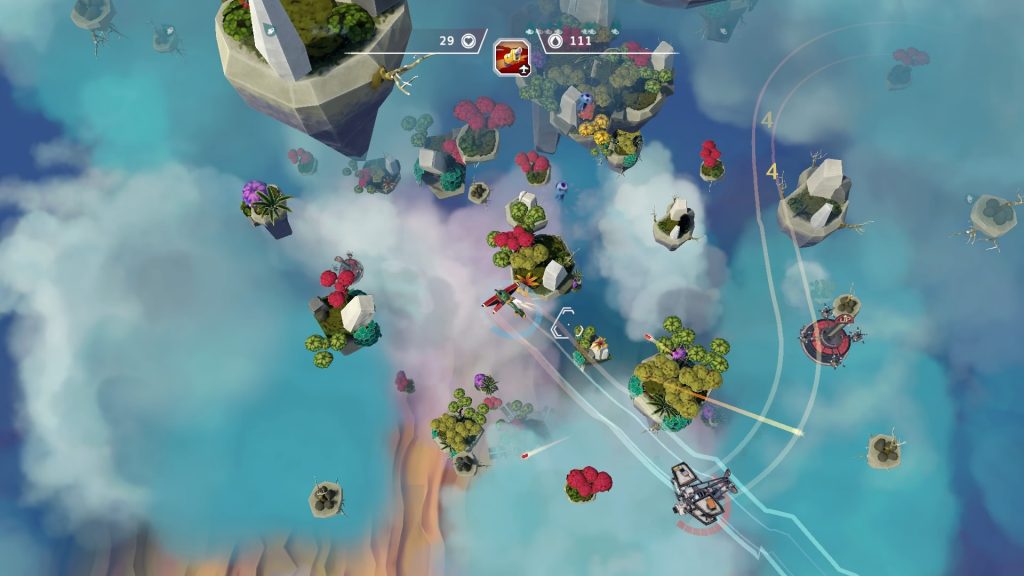 You can also call quits on a mission if the action gets a bit too much for you. Tapping down on the d-pad puts your plane into autopilot back to your base, but you’ll still need to steer to avoid islands in your way as you can still crash into them on your return home. This is essential in the early stages before you unlock decent upgrades and a more powerful plane beyond the stock banger. 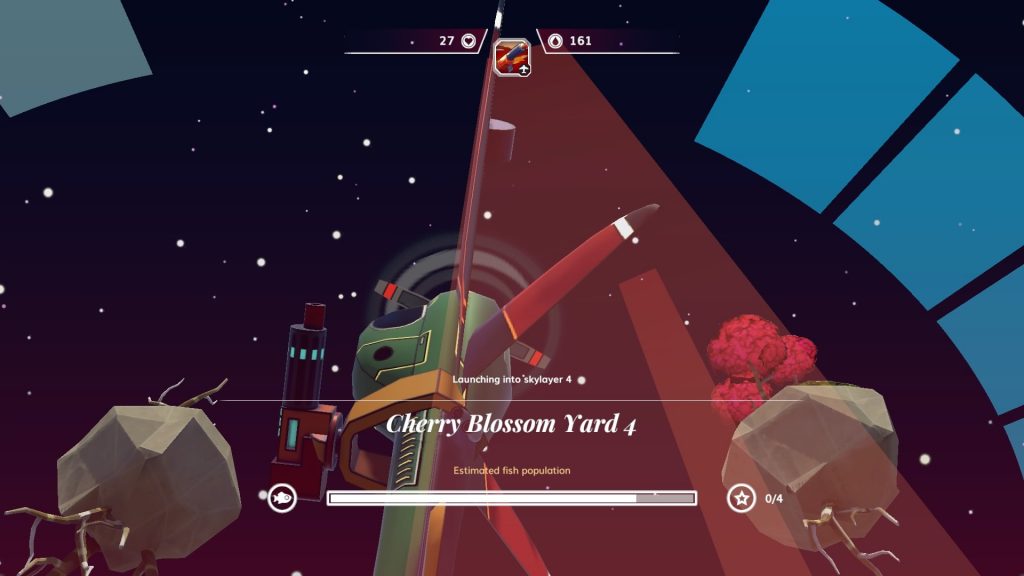 firing your guns. You can harpoon objects (including other planes) with

and reel them in with

. This comes in handy when you happen upon supply and health crates in later missions.

You’ll soon get into dogfights with air pirates with varying degrees of success. Annoyingly, if your plane is sent into a death dive, there’s a fair chance your hard earned plane parts can be lost and you’ll find yourself in your stock plane. All this means is you have to earn more money to buy more plane modules, usually by fishing.

The fishing then. It’s part of the games mythos of being a sky pirate but it’s never really fleshed out beyond the fact there’s fish in the sky. The ultimate goal being to track down the sky whale of legend your dead father told you stories about. 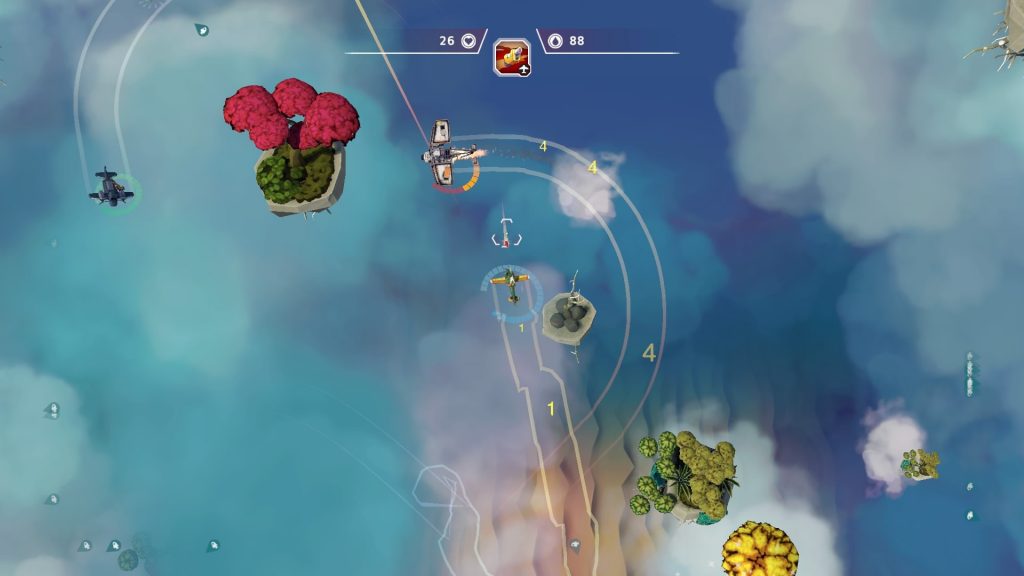 You’ll eventually face off against larger boss style airships teeming with weapons and lots of fighter support. It wasn’t the airship that did for us though, it was the support planes. Try as we might we couldn’t take enough of them out with enough health remaining to make a decent stab at killing the main target. We’re probably not that good at the game, but the core gameplay hook didn’t prove sufficient for us to enjoy coming back for another go.

Ultimately, Airheart is a reasonable game but not a remarkable one. There’s enough here to keep you busy but your attention is sure to drift off course, just as ours did.

Summary
Probably the only sky pirate fishing twin stick shooter you'll ever play. Airheart offers an interesting scenario and a reasonably good, but not remarkable, game.