Bug Fables: The Everlasting Sapling from Moonsprout Games by way of publisher Dangen Entertainment is an action RPG  that came out on PC last winter.  Now out on all current consoles including the PS4, we get to enjoy it too.

We’ve seen endless comparisons to the Paper Mario series from other reviews. We definitely agree on that front, but we got a definite Mario & Luigi Superstar Saga vibe too, especially in terms of the game mechanics. It comes to consoles just as Nintendo themselves have announced a new Paper Mario in fact. 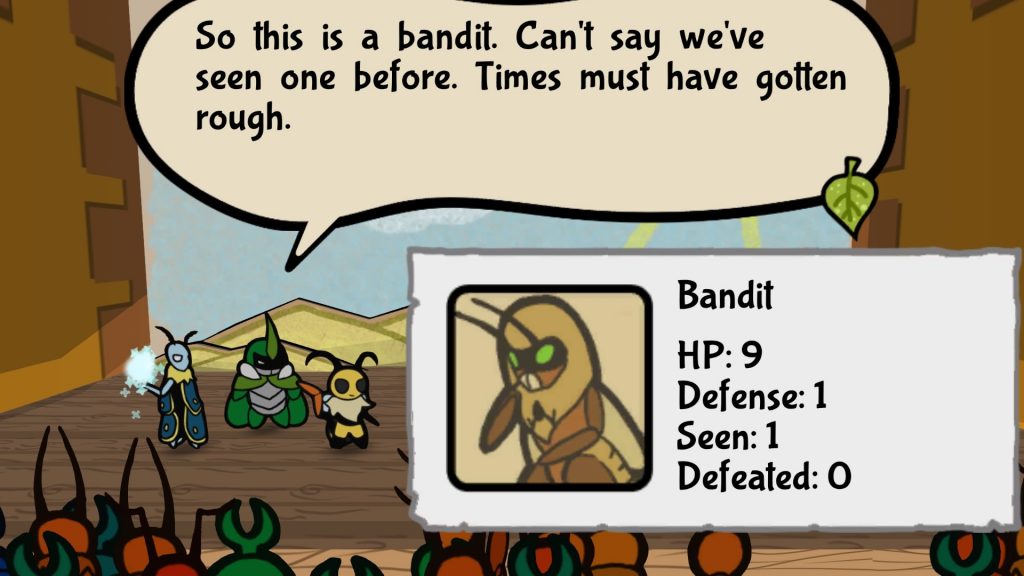 Across the seven chapters of the story you’ll go from the Ant Kingdom seeking artifacts to appease the standoffish queen. If you end up wondering about her motivation, don’t worry, we did too. With this sort of story driven questline, it’s quite hard to not inadvertantly spoil the story when writing a review. We’ll refrain from any plot beats at least.

At first you have a party of just two insects, Kabbu the beetle and Vi the belligerent bee. You’ll initially head into Snakemouth Cavern to uncover the mystery of what lurks within. Yet you’ll come out having defeated the boss and with a third party member, the moth mage Leif. 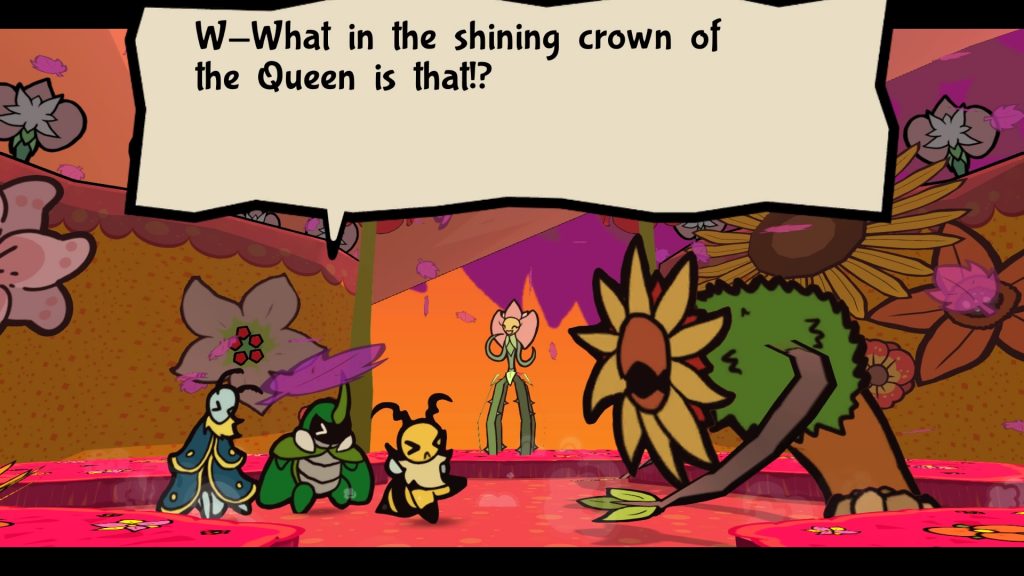 Battles are turn based, just like in the Paper Mario series, with special moves being dependent on your stock of TP. No, not toilet paper, but technique points. Even normal attacks are reliant on tapping a button at the correct point for maximum effect. Your success in battles is dependent, certainly in later stages, on timing your button presses to block enemy attacks too.

Kabbu is the heavy character, Vi the rogue of sorts and Leif is, as we already mentioned, the mage. Kabbu’s normal attack is a headbutt, Vi’s is a thrown projectile and Leif has an ice attack. Kabbu and Leif’s default attack are ground based, so in the event of a flying enemy, you’ll need to defer to Vi to get them on the ground. 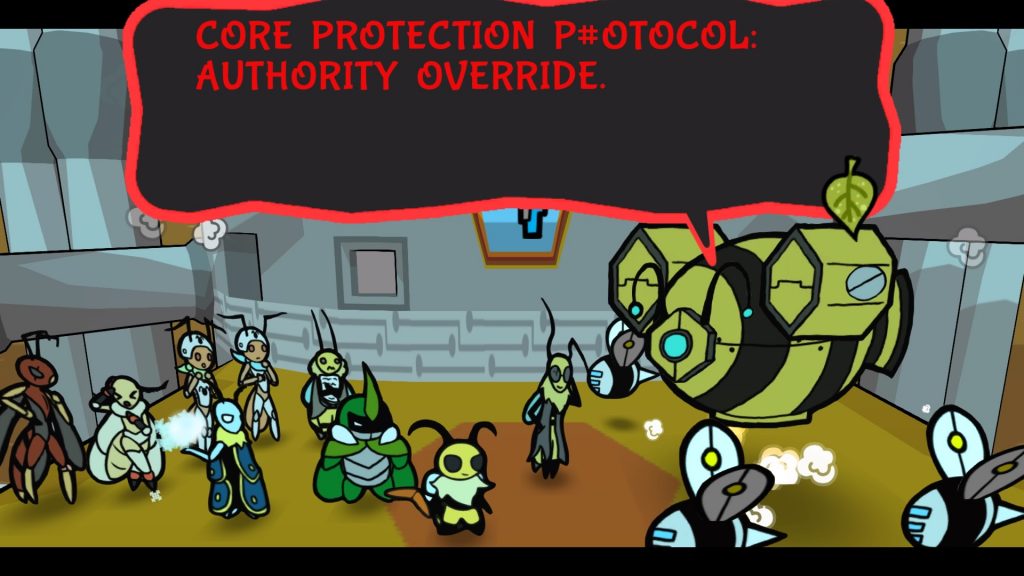 In a nice touch, you can pass your move on to one character if need be. If Vi’s air attack doesn’t do the necessary to ground an enemy,  you can defer your move to let him have another go. This technique proved particularly effective against one boss.

Talking of bosses, the first is very much done with training wheels on, so don’t expect to die in that encounter. All subsequent bosses and mini-bosses are potential banana skins though, so make sure you save beforehand. The boss of the third dungeon in particular almost seemed too much at the first attempt, arbitrarily hard in fact. We got past, but not without having used four resurrection items in the process.

Bug Fables is very well done with excellent mechanics and a fun storyline. As well as the main questline, there’s lots of optional quests to do besides. You can also pick up bounties to beat hidden mini-bosses, though at the time of writing we’d yet to encounter one. 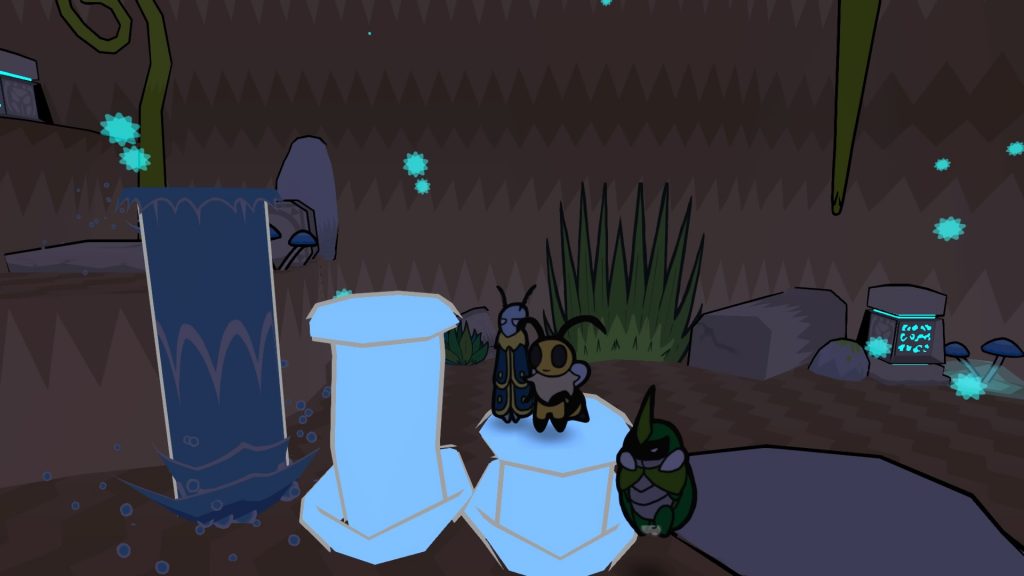 In a similar manner to Heroland‘s slow-burn, Bug Fables is a game that you need to put hours in on to get the full package. It also has a bestiary you need to populate, as well as multiple collectibles. We feel like we’ve barely scratched the surface in terms of the game, but we’ve already put in fifteen+ hours and intend to keep playing until we reach the end.

Just like Heroland, trophies don’t come thick and fast and you’ll need to work at it if you want to get a platinum. Though the hard difficulty  boss fight trophies don’t exactly fill us with glee as we struggled enough on normal.

In conclusion, Bug Fables is a very good action RPG which you’ll want to keep playing for ages. If The Everlasting Sapling subtitle is a hint that this is the first of a series, we look forward to a sequel.

Summary
Bug Fables is a great ARPG inspired in no small part by the Paper Mario games. It's really rather good.

One thought on “Bug Fables: The Everlasting Sapling – PS4 Review”