Blightbound is an online-focused co-op hack and slasher with RPG elements and it comes to us from the fabulous Devolver Digital and was created by Dutch dev crew Ronimo Games.  It started life as a PC early access title in 2020 but has now landed on all the consoles.

Set after a global cataclysm, Blightbound focuses on a team of heroes who live in the Refuge, a mountain-based camp high above the blighted lands below that are now full of evil monsters.  To fight back, teams of three heroes can choose to visit different areas, clearing out the mobs within and eventually facing off against one or more bosses.  There’s a degree of storyline to back this up but Blightbound keeps that on the back burner, accessible through a journal screen rather than hammering you with cutscenes.  As a multiplayer game, there really isn’t time to be soaking in loads of lore.

The main thing here is that the Refuge acts as a hub, much like in Destiny, here is where you sort out your inventory (equipping, buying and selling), craft items, hand in side quests and pick your next mission.  When you’re ready to go, it’s time to battle the beasts in the main game.  You always go in as a trio with a locked class combination of one wizard, one warrior and one assassin.  So if two of you want to be a wizard, for example, it’s going to be down to who picks that class first.  If you’ve not got enough humans to fill the party, bots can take up the spare roles.  The game then lets you pick a level from a selection of ten and then that’s it, you’re into the action. 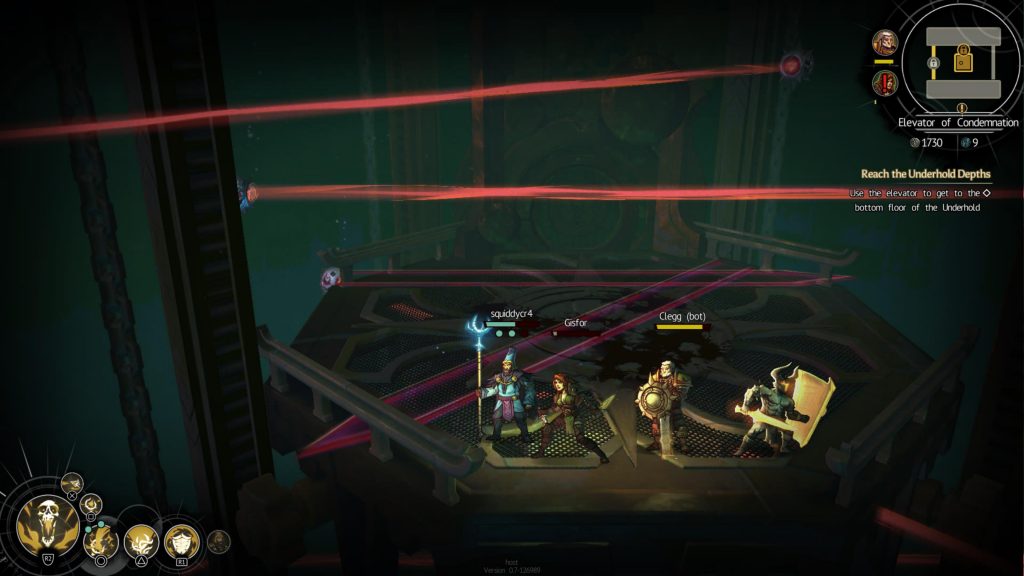 Blightbound‘s gameplay is reminiscent of the 2D brawlers of the past, games like Golden Axe and Double Dragon.  2D but with the ability to move up and down as well as left and right.  The levels are essentially connected rooms and corridors that can be freely navigated (as long as there aren’t any locked doors) but you’ll always be trying to get to the exclamation point marker that tells you where your next objective is.  Each level is basically a small, simple maze layout.

In your way will be various mobs that materialise from puddles of magic and will keep coming until you’ve defeated enough of them.  They’ll keep punctuating your progress as you attempt to get to the next objective and they’ll attack in groups with occasional elite enemies also getting involved.  To combat them, your team will need to work together, giving Blightbound a more tactical approach than your usual beat ’em up.

The warrior character is your tank, taking and giving lots of damage.  The mage is your ranged character, firing off magic bolts from the periphery of the battle.  The assassin uses backstabs to deal heavy damage but is quite weak when the combat goes face to face.  So clearly, everyone needs to play to their strengths and work as a team.  That said, the 2D graphics and crowded play areas make it quite tricky to assess what is going on the whole time.  Especially when the warrior spawns a couple of minions. 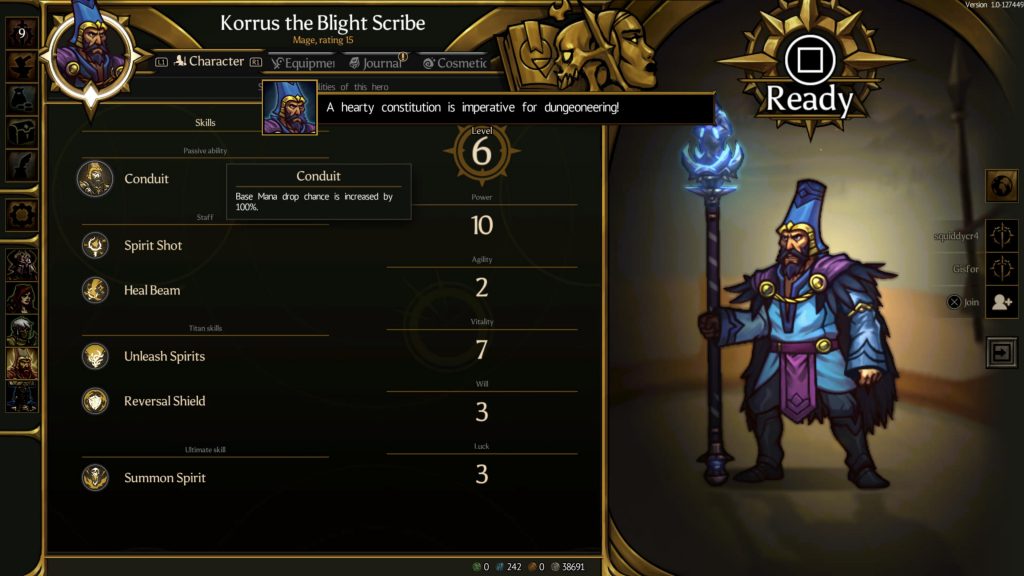 Each level ends with a boss battle which sees you battling with a big, undead bastard who usually spawns plenty of helpers.  But if you can get through that, you’ll get to go back to The Refuge where you’ll be able to equip your loot and increase various stats.  But if you fail you’ll get nothing at all.  No EXP, no loot.  Just frustration.  And the frustration is a real factor with Blightbound.

The level select screen is a little odd.  It gives you a selection of levels to choose from and each has a ‘blight level’ which basically is an indicator of how strong the enemies there are.  If you’ve got a higher ‘party level’ than that number, it’ll mark the level as Easy.  If you’re level with the blight, it’ll be Normal.  And if you’re in deficit, you’ll get a Hard or even Impossible rating.  So if you’ve got a specific level that you want to play but it’s Hard or Impossible, you’ll just need to play another one and hope that you getting a nicer roll next time.

And this is a problem because Blightbound isn’t an easy game.  As we found countless times, you can pick a level that is Normal, or even Easy, and be doing well but death will just come and spoil the run.  From cheap bosses to suddenly difficult mobs, a good run can go bad in an instant.   Sure, you’ll dust yourself down and go again but when it keeps happening, it has two effects.  Firstly, it stops being fun.  Secondly, it makes you gravitate towards the easier stages.  That means you get less interesting loot and when the loot isn’t rewarding, it just becomes another thing to manage rather than enjoy. 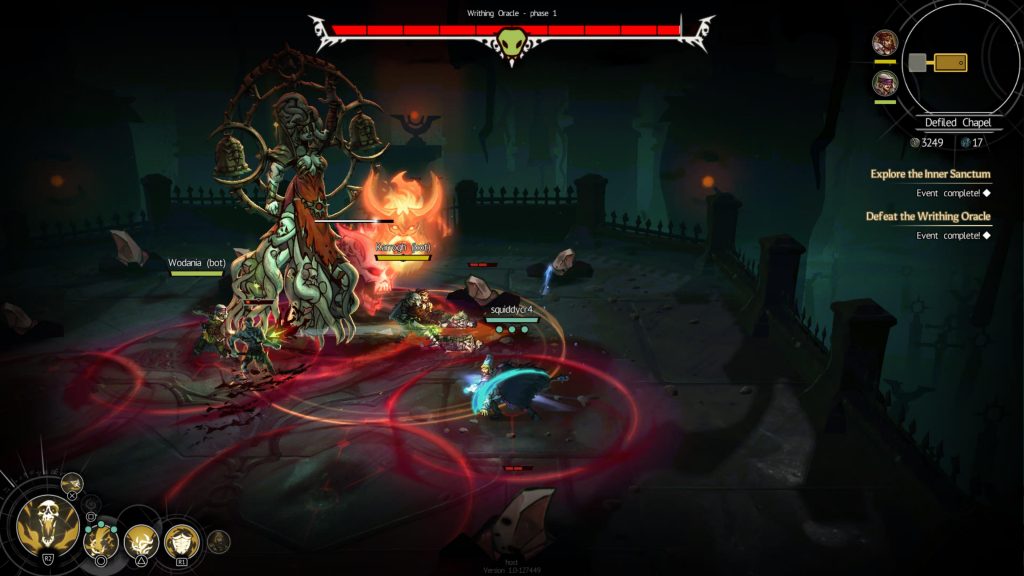 We’ve been at a party level of five and have wiped out against a blight level of one because of a bad boss or a room where all hell breaks loose.  Visually there’s a lot going on as we said and this means that sometimes it’s hard to see who or what is targeting you.  Add to that the slightly confusing perspective and what feel like very loose hitboxes and death can come all too easily to you and your team.

Trying to pull together a public party seems to be almost impossible and we actually found that playing as two humans and one bot was easier than having three humans.  Indeed, if you’ve got two bots fighting with you, as the lone human, they actually do a very good job in combat.  However, their janky AI means that they can end a run just because they can’t figure out some of the game’s very basic pressure-plate puzzles.  It’s pretty galling when that happens, we have to say.

There are other issues too, such as the bafflingly unhelpful menu system (it took us at least five minutes to figure out how to even start a party), the clumsy crafting/selling screens.  The way that you just get the same loot items over and over (at least when trying to mitigate the difficulty).  The fact that the map has lock icons on corridors that aren’t locked.  The way that we had a mission where we had to return to a bell but when we did nothing happened until the timer ran out and then we were killed instantly. 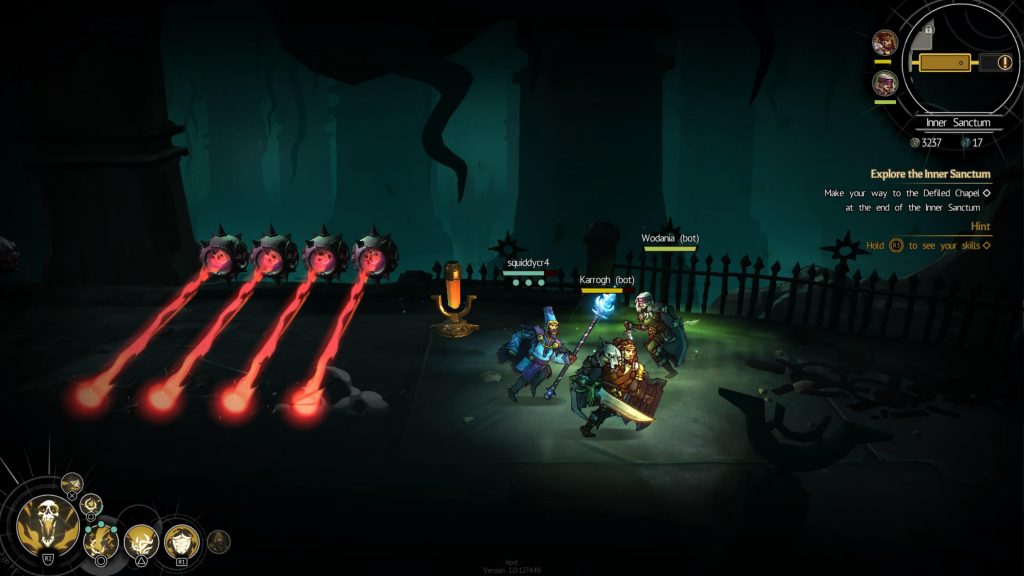 The controls are also pretty fussy with lots of attacks (and hard to read associated cooldown indicators).  Pulling off some special attacks can be fiddly thanks to the game wanting you to aim but not locking your running as you do.  Charged attacks are a faff.  The stealth reliant assassin character also has to deal with the fact that enemies will flip instantly (there is no turning animation) which means a split second is the difference between a powerful backstab attack or just having to duke it out in a fight you won’t win.

Even when you are making progress and beating stages, the upgrade system (and aforementioned loot) don’t make it feel rewarding at all.  Bad loot systems are a real issue for us.  If you’re going to do loot, do it right.  Make it addictive, make it compelling.  Make it matter.  Blightbound doesn’t do that.  And when you factor in a stat limit of 10, meaning you never ever get to feel powerful, and the fact that you keep unlocking extra versions of the same character classes and they don’t seem to really make any difference, you’re left with a game that has a lot going on but doesn’t really seem to be doing anything.

While the gameplay doesn’t really hit all the right beats, the presentation isn’t too bad with a hand-drawn graphic style.  The animation isn’t great and to be honest everything starts to look a bit samey but we prefer this art style over anything overtly retro.  There’s voice acting and music too, so the game has a decent veneer of polish to it.  That said, seeing little issues like overscanning (leading to a line of rogue pixels on the right of the screen) make it all too obvious that we’re dealing with a PC port here and not a well optimised one. 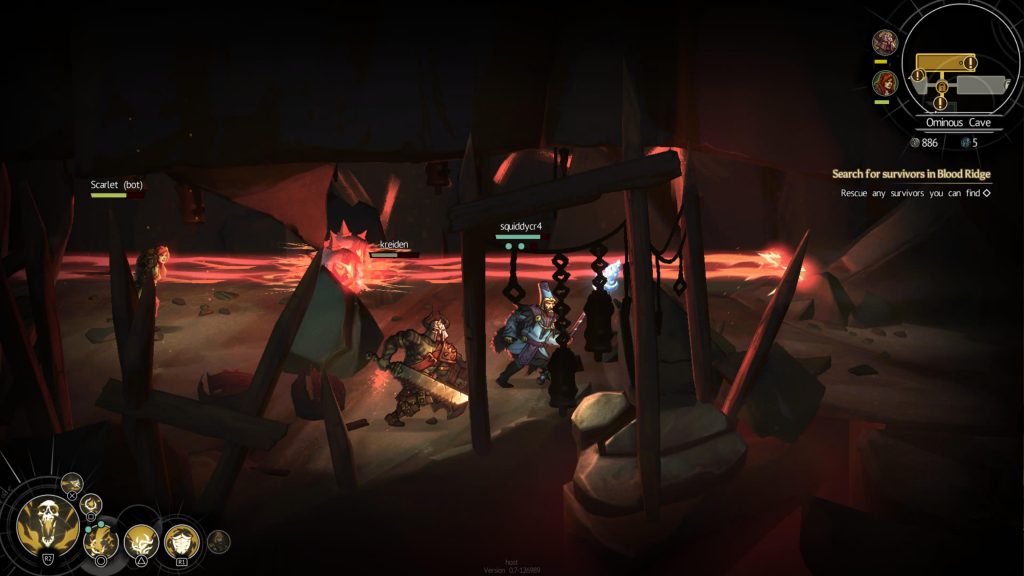 If the devs make good on their promise to keep working on new content, then Blightbound could get pretty good but we can’t ever see it being essential.  There’s too much complexity to the game but none of it pays off.  When the combat is going well and you’ve got a decent group going, there is fun to be had.  But it’s all tempered by the knowledge that at any moment, it could all be over and that the last 20+ minutes will have been for nothing.

What this game needs is some better progression, a much better loot system, a level selection system that actually makes sense, tweaked difficulty, better menus, AI that can solve basic puzzles, some variety and tighter controls.  At that point you might as well cross your fingers and hope for a much better sequel.

Blightbound
5 Overall
Pros
+ Reasonably polished presentation
+ Able to mix bots and humans for co-op play
+ Combat can be enjoyable when it is going well
+ Makes the lore optional
Cons
- Very samey
- Unintuitive menus
- Weak upgrading and loot progression
- Game-ruining AI
- Difficulty spikes ruin everything
Summary
We're always up for some co-op brawling action and we love a good loot system and RPG mechanics. Unfortunately, Blightbound rather fumbles the ball when it comes to every element. There's fun to be had when it goes well but you feel as though you're fighting every aspect of the game to get to it.