A while back I reviewed Strawberry Vinegar and it was arguably the moment where I really, really started to sound alarm bells about the visual novel genre. It was probably one of my first introductions to the fiction that is, ostensibly for weirdos, by weirdos. I knew Ebi-Hime had written a sequel but it’s only now that Blackberry Honey finds a way onto Playstation platforms. To my surprise (and relief), the follow-up is a lot more substantial and significantly less tricky to talk about. 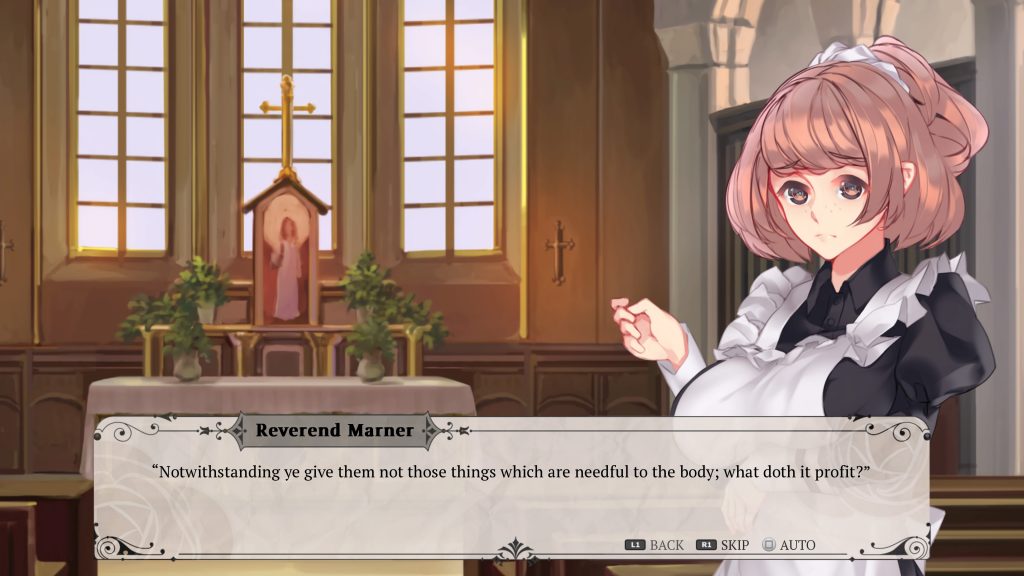 The simplest way to explain Blackberry Honey‘s gameplay is that there is none. There is no branching points, no decisions to make and nothing else to do besides turning pages. I know visual novels aren’t the most interactive of genres but, when it’s missing, you really, really have to rely on the narrative doing the heavy work.

To Blackberry Honey‘s credit, the story is a long one and takes place in a fairly grounded setting. The tale focuses on Victorian maids tending to a wealthy estate. They live in Dickensian squalor whilst under the thumb of a teenage madam and our main heroine, Lorina has just arrived as a new hire. She’s arrived under the cloud of some scandal which the game does eventually shed light on. The other maids are largely welcoming and the early stages involve a lot of setting up characters, house dynamics and other relationships. 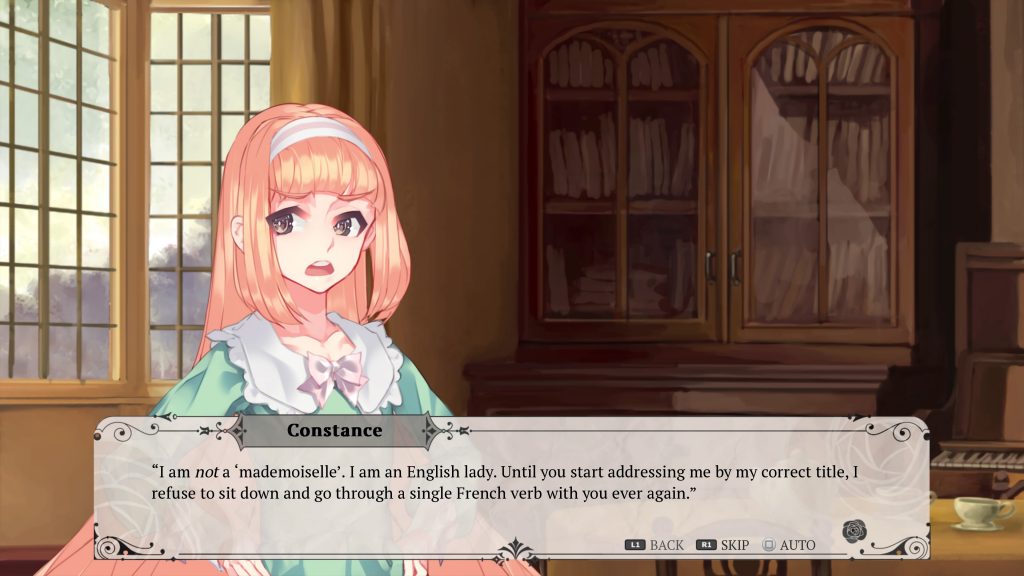 The game charts the next six months of her journey as she settles in, falls out of favour and generally struggles against the unreasonable demands of their child master. Lorina is a new arrival from Liverpool who’s somewhat shaky past eventually comes to life. The circumstances of her previous work is interesting to find out and does help flesh out the person we spend the most time with.

We also get to spend time with the fellow housemaids who all have their quirks. Unfortunately, it does result in them feeling fairly one-dimensional. Liselotte likes God and Switzerland and the story can’t help but hammer these two points home. Pauline is permanently catty towards Lorina and constantly dangles the sword of Damocles above our protagonist’s head. Ada quickly becomes the only other maid who befriends Lorina but she’s so childlike that it becomes something of a sisterly bond. She’s quiet and meek but I don’t really see them doing a whole lot together. 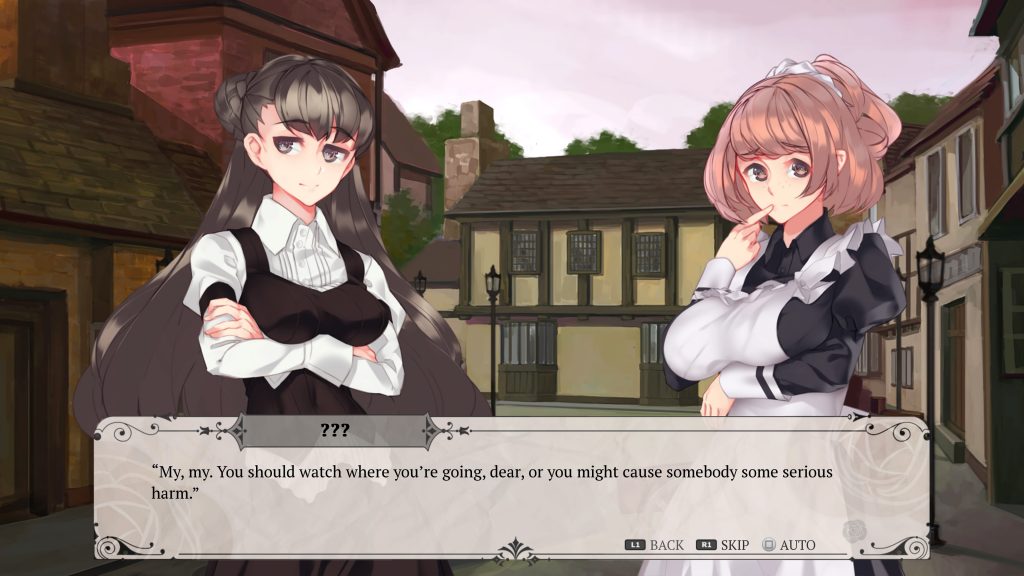 The relationship this game hinges on is one between Lorina and the parlour maid, Toahua. Her name and appearance indicate she’s mysterious and foreign but the game really withholds her backstory until the final act. These two interplay well but their eventual romance is a slow burn. Lorina immediately fixates on Toahua but it takes a while for them to really start spending screen time together. Not being part of the maid clique does allow that distance but it can make the early advances feel forced.

It’s a very slow burn with every day of those six months seemingly accounted for. It does allow time for the love to blossom and relationships to develop. There are subplots that I actually found interesting. Lady Constance sabotaging every one of her teachers’ and her absolute disdain for the maids is fun to watch. It’s not very often you see a child as a villain but it kept my attention.

Blackberry Honey carries a lot of visual polish. The background artwork and portraits are fairly intricate, although I find Lorina’s breasts painfully comedic in size. It undermines any drama when she’s visibly trying to support two sandbags under her arm. Aside from that, there’s a ton of periodic flourishes with photographs of stately homes being used for the basis of the main locations. Each scene ends with some really lovely transitions and you’re never really stuck watching the same scene for too long. 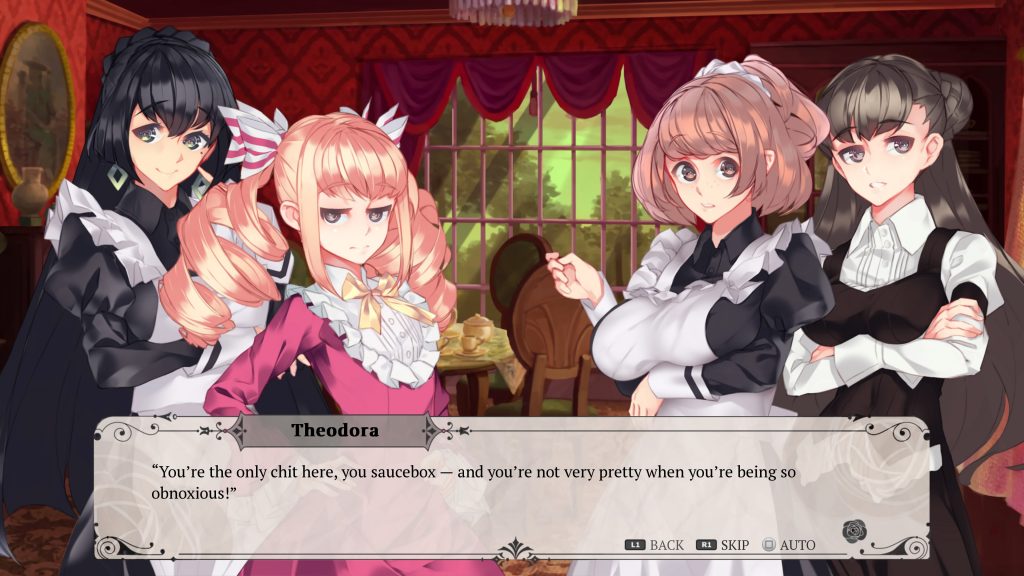 Musically, it’s jaunty and loud. It might be to someone’s tastes but I felt it was too overpowering. The game opens with a cheery theme song with is a bit too much for me. The instrumental version is much more palatable. Very little of it implies woe or terror and it all largely remains up in tempo. I can’t call much of it to mind but it is fairly enjoyable. Each day comes with a musical sting and little touches like that add to Blackberry Honey’s overall presentation.

The more I think about it, the more I appreciate what Blackberry Honey manages to do. Yes, it’s another lesbian love story but it doesn’t feel forced and instant. There’s six months of game time to play with and the majority of that is used to good effect. As a game, it’s just a book and, by those standards, some of the characters are flat and bland. Despite this, I didn’t mind it. There’s polish in the presentation and the narrative manages to stay grounded.

Blackberry Honey
7 Overall
Pros
+ Decently written with strong main characters.
+ Plenty of visual flourishes like really stunning transitions.
+ A lengthy tale that's leisurely paced.
+ Has a couple of interesting subplots.
Cons
- Some of the supporting cast feel underdeveloped.
- The music can, at times feel overbearing.
- No interactivity on offer or decisions to make.
- Lorina's oversized chest looks like a genuine disability.
Summary
Blackberry Honey did defy my low expectations. Whilst it is another typical lesbian love story, the time spent on it is used to good effect. The main two characters are well developed although the rest of the cast can feel undercooked and one-dimensional. There's a couple of enjoyable subplots and there's plenty of flourishes when it comes to the presentation. It's a shame it feels more like a book than a game. A little interactivity could've helped break up the monotony but what's here is decent.