Black Mirror is a reboot of the PC game from 2003 and tells the tale of spooky goings on in a Scottish country house. I must admit this game totally passed me by during its first PC outing and I personally don’t think the name carries enough weight to justify rebooting almost 15 years later. But regardless of this we now find ourselves looking at a point and click style adventure game adapted for the PlayStation 4. 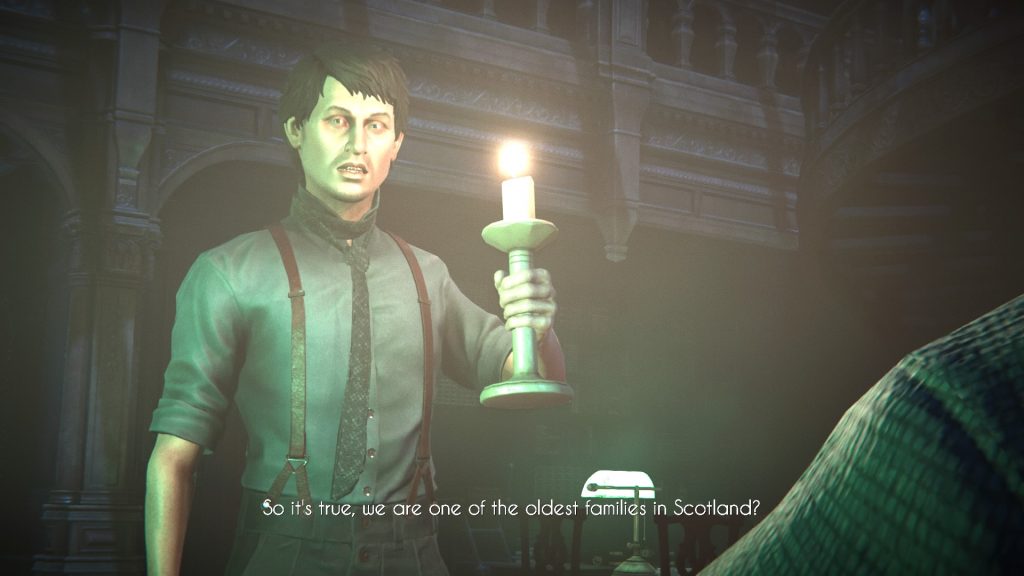 I’ve played a few adventure games and consider myself a fan of them, I find they offer an interesting way of telling a story with more going on than a straight up narrative walking sim style game.  The fact many of these kinds of games are mechanically simple also means that they can work in some visually interesting locations without having to worry about camera issues or complex navigation.  A particularly recent highlight has been Thimbleweed Park which managed to tell a decent tale filled with puzzles and be visually interesting at the same time.  Unfortunately Black Mirror has more in common with lamentable Syberia 3 as it is both buggy and cumbersome.

The overall story being told is interesting, full of intrigue and shady characters.  You play the recently returned son of a once wealthy family, well out of your comfort zone. You’ve spent all of your youth in India and only returned upon discovering your father has died in mysterious circumstances.  The house staff are a mixture of the odd and the downright hostile and everyone seems to be hiding a secret.   In many ways it is a typical haunted house tale, and quite interesting with it. 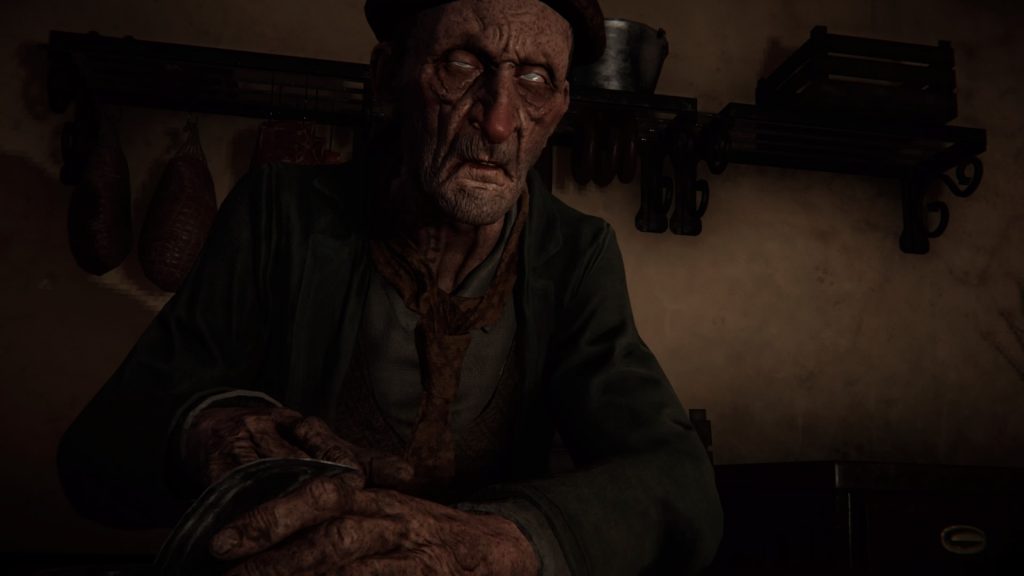 Aside from the plot things come crashing catastrophically to the ground in pretty much every other aspect. The first thing to notice is the low quality of the graphics with characters barely animated and some shoddy looking faces.  In particular when characters move from one set position to another, say standing up from a seated position, the animation looks stilted and jerky and completely breaks any kind of immersion.  This low quality of animation is present throughout the game and is really noticeable in such a character driven experience.  Adding to this are poor controls with your character often getting caught on the scenery or having to manoeuvre into just the right position in order to interact with an object.

Both of these things combine when entering a conversation as your character will jerk around like a clockwork toy to walk to the exact correct location to start the conversation.  Once again this is disappointing as the voice acting is pretty decent overall. It is just the fact of seeing the words spout from barely animated faces which ruins any sense of connection. 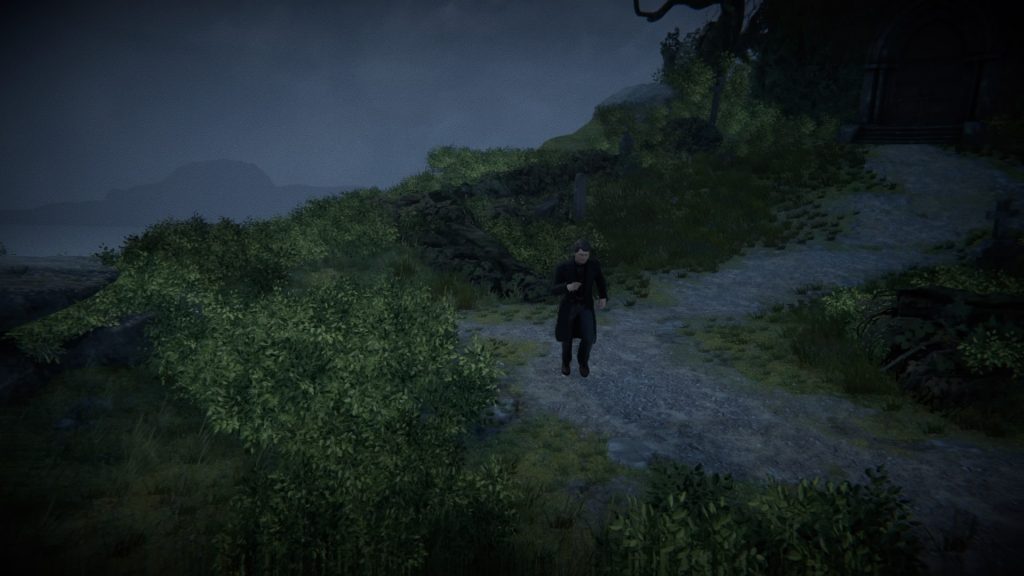 On top of the general presentation issues Black Mirror is full of bugs which, whilst not game ruining, are pretty bad.  I’ve seen books miraculously opening and closing on peoples laps and close-up conversations where the protagonist leaves the camera frame resulting in lines of dialogue apparently being delivered by an empty chair .  These are all examples of shoddy design and really break the immersion the game is striving to achieve. This is a shame as, like I’ve mentioned before, the story being told is pretty decent.

There are also far too many loading screens for what is a relatively small scale game.  The bulk of the action takes place in a grand country house, which isn’t actually all that big.  Disappointingly every time you enter a new room, or corridor, the game has to load and takes just a bit too long to do so.  In practice moving from one side of the house to the other can result in more time spent loading than actually walking.  Frequent loading is never a good thing and in a game like Black Mirror, where exploration of the environments is key, these loading screens really get in the way.

As with all good adventure games Black Mirror has puzzles to provide the main meat of the gameplay, what there is of it.  In many adventure games you’ll be asked to complete a series of puzzles which generally feed into one large puzzle which will then allow progression to the next chapter of play.  Black Mirror doesn’t really do this and instead has maybe one decent puzzle per area. These puzzles can be proper head scratchers, and may need some decent time to figure out, but they are few and far between. There are a fair few low level tasks to complete but these are barely puzzling and mostly inconsequential.  As a result the game just ends up feeling a bit sparse with nothing to do expect look at the loading screens. 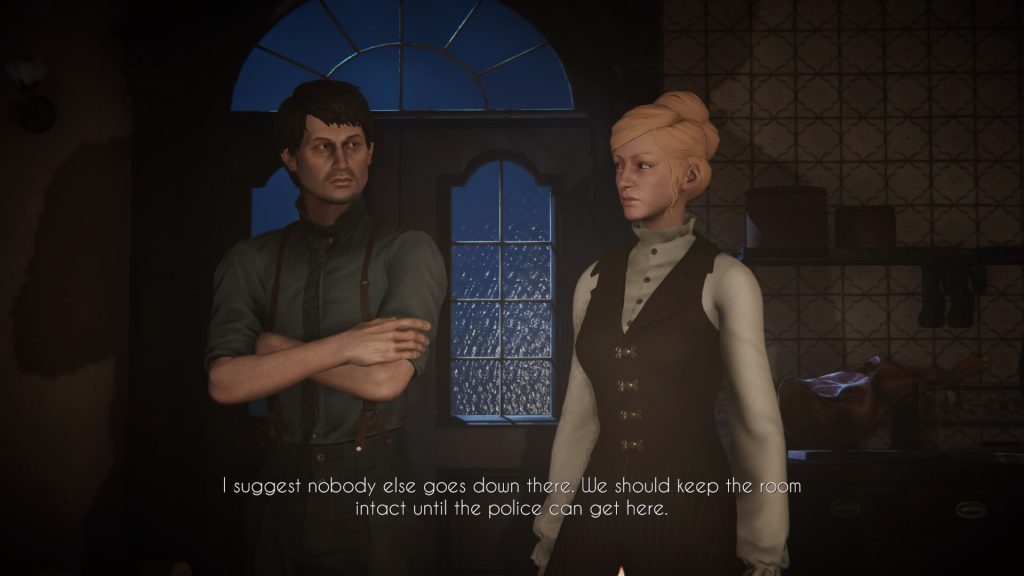 Despite a decent setting and story the actual act of playing Black Mirror just isn’t enjoyable. As a result the many flaws really stand out. For adventure game fans this is maybe one you’d want to look into if it ever goes on sale, but for anyone else there are far better places to start your adventure.

Black Mirror
4 Overall
Pros
+ Decent ghostly mystery story
+ Interesting location
Cons
- Graphically this is pretty poor
- Animations are very simplistic
- Far too many loading screens
- Lots of graphical glitches and navigation problems
- Not actually that many puzzles to complete
Summary
Despite a decent setting and story the actual act of playing Black Mirror just isn’t enjoyable. As a result the many flaws stand out all the more for it. For adventure game fans this is maybe one you’d want to look into if it ever goes on sale, but for anyone else there are far better places to start your adventure.