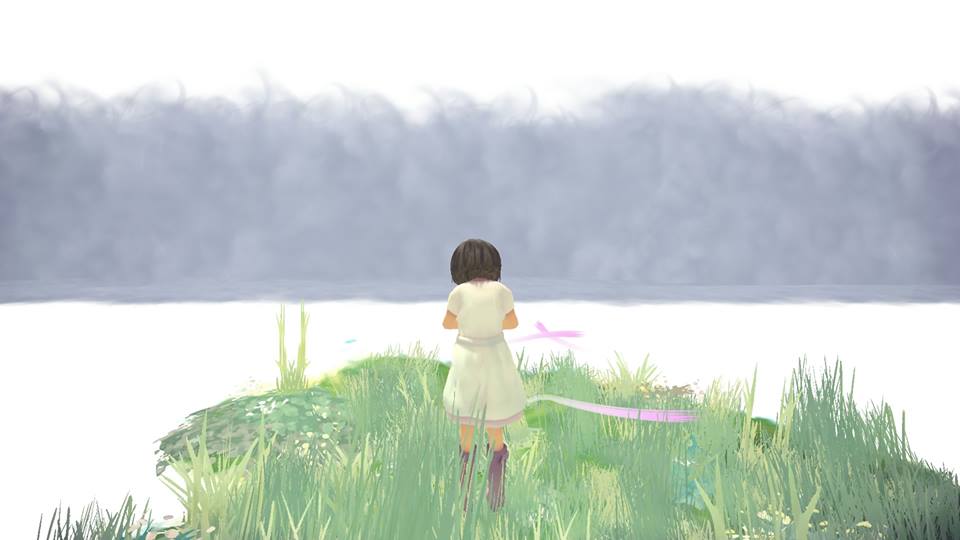 Beyond Eyes is a 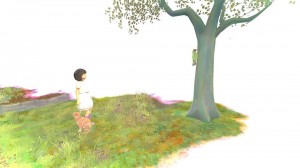 n example of what we at Playstation Country call “a game about feelings” This is an exclusive category given to games which aren’t really much of games at all, that instead focus on concentrations of ’emotional connection’ and ‘deep and meaningful’ storytelling that doesn’t feature usual gaming archetypes like aliens or mowing down countless soldiers with a minigun. This category has been one that Indie developers have been keen to fit and for good reason. Gaming has evolved from the brutish and simplicity from the 80’s and 90’s, now we are surrounded with ‘experiences’ that test our perceptions of gaming as a whole and carefully shoehorn their way into our medium to represent a more considered and artistic alternative. Sometimes these experiences go on to earn plaudits across the board, in other cases these fall entirely flat for being low on substance after you strip away the fluff.

This game is a rather simple tale about a girl named Rae who loses her eyesight from an accident involving a firework. During the time after her accident she meets a cat who has wondered into her garden who she soon calls Nani. For a time the cat visits frequently, but as the seasons pass these visits become more rare, until it suddenly stops visiting altogether. Rae decides that she will go on a search for Nani due to this and leaves her garden to go do that and this is where the game begins.

As a game, Beyond Eyes is by far the most arbitrary and tedious experience imaginable. Rae moves at a plodding snail pace a
s she fumbles around the world trying to light up her path which happens within five inches of where she is standing, I can only begin to describe the frustration that occurs because of this due to how the objects materialise in front of her. Imagine walking slowly along next to a brick wall, you notice a gap in the slowly showing image as you see what appears to be an entrance opening up, you turn towards it and are instantly halted by a gate which has just dissolved into view. You are now stuck like velcro on the scenery as any minimal momentum Rae had has been lost in this otherwise minor altercation. You turn 180 degrees and then you proceed to walk slowly forward and onwards until it happens again. Then you repeat this. This is the gameplay for Beyond Eyes and bar three, maybe four more objectives in this game this is all you will be doing. I really wish I was exaggerating on this one. 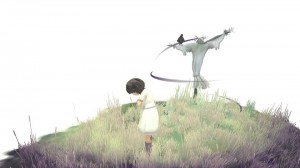 Now I understand fully that a game about a blind girl should not be rocket powered, I don’t expect her to run around bumping into things. What I do expect in a game about a blind child is an emphasis on other senses; Touch, smell and sound. The developers have taken some consideration into these aspects as minor mechanics during the game but yet these feel underutilised. The benefits of touch come into function when Rae perceives a sound to be coming from something other than what the sound actually is. In one example you have Rae approach an elegant seeming water fountain, but as you reach it you find it to be in fact a storm drain. This is a clever trick to play and could work well in the games favour but it is a mechanic that is so severely underutilised and rarely shows up in the game. Smell and sound are very similar and are depicted by different coloured lines as a visual cue. Yellow is for smell, purple is for sounds of things that block your path. I can think of only one time that smell is used as a useful mechanic in the game and it only accounts for a couple of scents such as freshly baked bread or fish at a market. This is such a missed opportunity when there is so much imagery you could depict from smell alone. What if the said bread smell reminded her of home? So it conjures up an image of a younger time when her mother used to bake bread? Something like this would have been interesting and would have told a story about Rae that would have allowed the audience to connect and would have been simple to implement and would have broken up the game from it’s plodding, tedious pace. 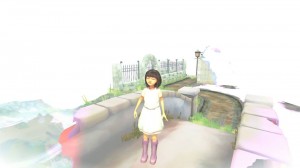 The major saving grace for this game is the art style. As previously mentioned the world materialises in front of Rae as she explores it. It is quite arresting to see the stark white background become realised as the kind of watercolour painting you would see in a children’s book from the 90’s, especially when you turn the camera around to see the path you have carved through the emptiness. Unknown or frightening sounds are depicted by swirling, smoky clouds which obscure the true nature of the obstacle, in one brilliant moment you come up against a long line of cloud which blocks your path. I will not spoil what the cloud hides as it is never replicated in the game or becomes the norm, but it is genuinely one of the only moments I felt like this game had hit it’s mark in trying to replicate how frightening being a recently blinded girl could be. 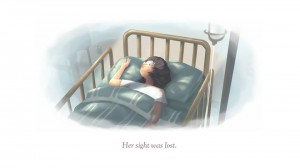 Beyond Eyes is designed to play on your emotions and empathy but falls apart when considered as a piece of interactive entertainment. It sells itself as a storybook but it doesn’t have much of that to offer, relying on colourful whimsy over any type of plot development. It is being sold as a game which as previously mentioned it doesn’t really have any gameplay to speak of. It feels like a five minute Pixar animation that has had two hours of walking attached to it and unfortunately because of this the game Is incredibly hard to recommend.

Beyond Eyes
4 Overall
Pros
+ Interesting watercolour art style + Occasionally has a good concept or idea to share
Cons
- Tediously slow - Frustrating reveal mechanic - The ending is not worth the two to three hour journey.
Summary
Seek this only if you want a whimsical view on what it is like to feel blind in an uncertain world, it may well be educational to some, a previously uncovered glimpse into what it is to be in this situation. Strip away the art style though and there would really be nothing to see here.