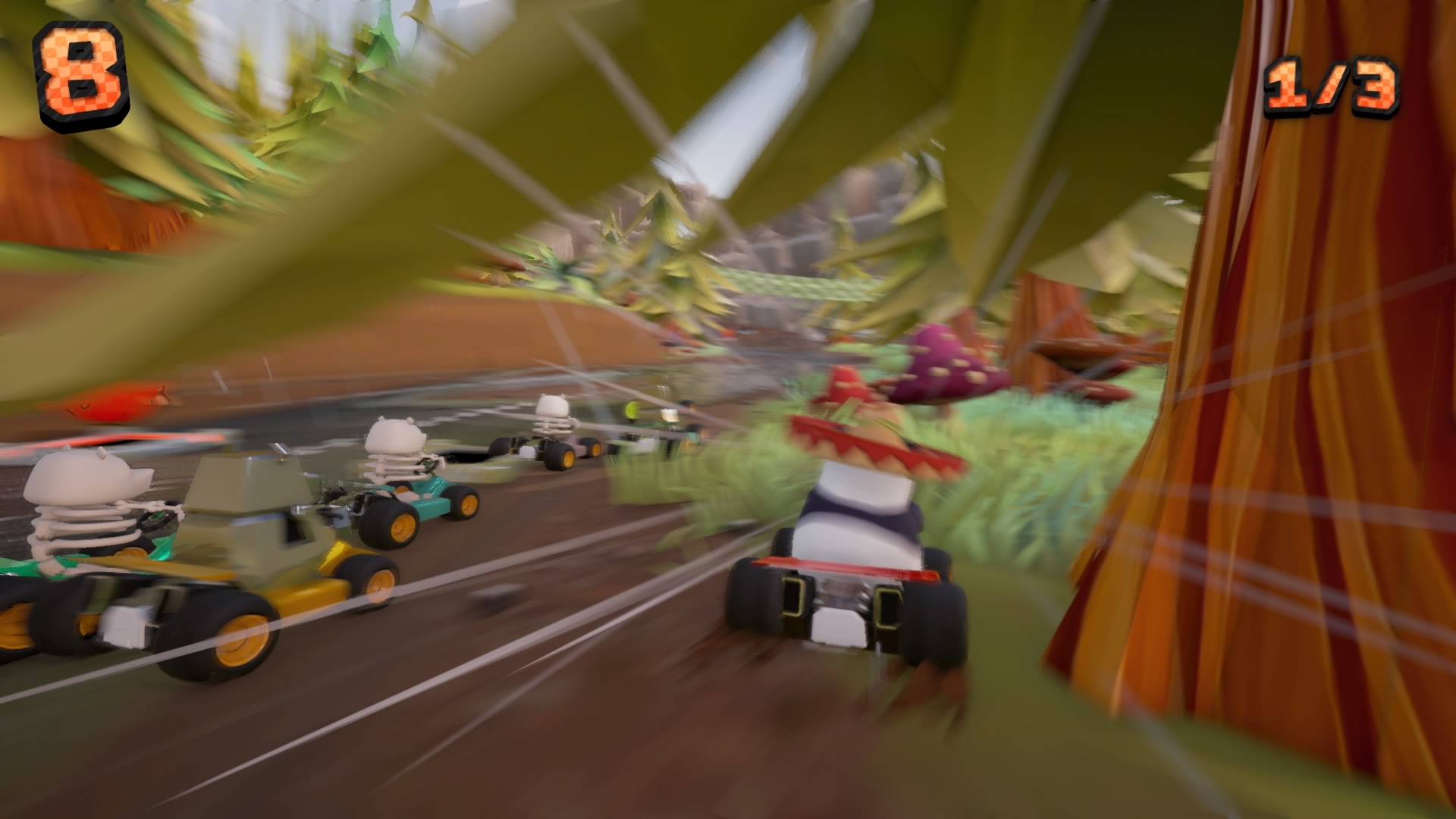 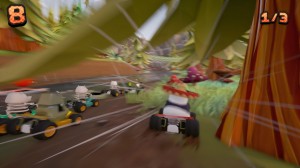 Bears Can’t Drift!? is a Mario Kart style racer involving bears and is primarily from a one man team. I still think the original SNES Mario Kart has yet to be beaten for sheer playability so can this new indie game on PS4 come close?

Made in Unreal Engine 4’s Blueprint system Bears Can’t Drift!? uses very little coding at all as the developer’s expertise was 3D modelling. I’m not tech savy enough to know how much of an effect that has had on the game but it’s an interesting thing to consider.

Loading up Bears Can’t Drift!? is an odd experience. A title screen comes up which you press cross to get past and then you’re just dropped into your vehicle, no instruction, no nothing. As with most racing games these days R2 (and R1 actually) accelerates and L2 (and L1) brakes whilst you can steer with the analogue stick or dpad. So you start driving forward and you drive under a floating bear head with a dummy in its mouth and a little chime plays as you do so. Keep going and a door opens up in front of you which leads to three portals, just keep going forward and you’re transported to a forest area.

Again you just appear on the screen and get to drive about, a square appears on your bear which if you press it changes between three symbols, a podium, a stop watch and a picnic basket so that must be the game mode. You then discover more gates which when you drive through takes you to that level. It’s a very odd system which tries to negate the need for menus at all (if you pause it a menu does appear but only with images, no words are used).

The actual events themselves are based on twelve tracks and come as straight races with pick ups, a time trial mode where it’s just you against the clock and picnic mode which has you driving around a slightly modified version of the track trying to collect more food than your opponents. The bear head that I mentioned earlier is actually the difficulty select so you can play on easy, medium or hard for races and picnic mode which will earn you a gold star if you finish first, silver for second and bronze for third. There are twelve bears on track at one time so there’s a lot of competition. 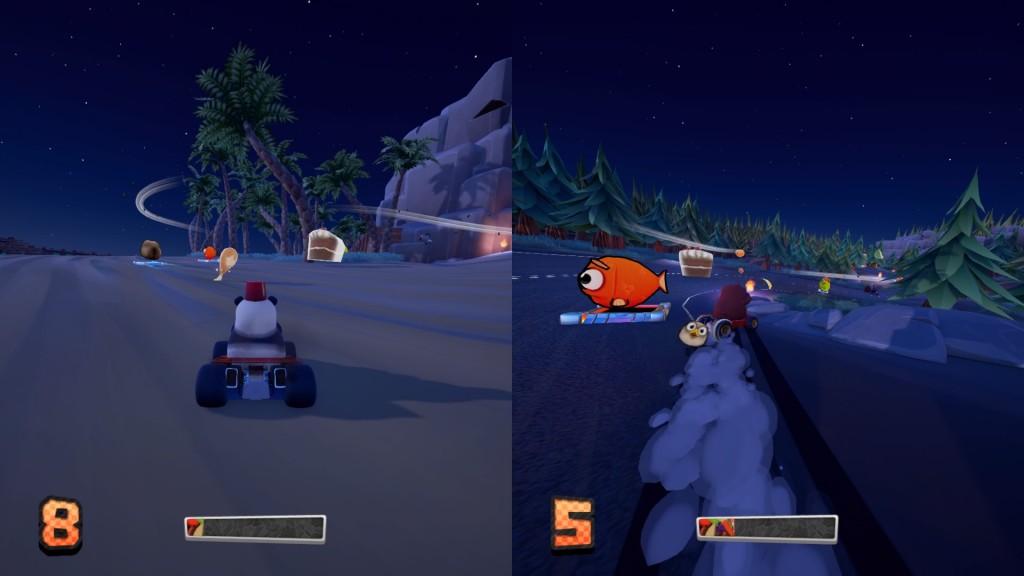 As there are no tutorials or control schemes pressing the buttons shows that there is a drift mechanic by holding the circle button, you can look behind you with triangle, cross fires whichever weapon you have collected and in the hub world pressing the touch pad allows you to change your bear. There are four weapons, each animal themed. You have a fish that is a rocket which bounces around the track, a chameleon that provides a shield, a bird that is a speed boost and a bee that drops a beehive behind you like a mine. All the usual suspects, but there is one crinkle to the formula in that if you collect two of the same pick up then it turns into a different one, like two fishes means you fire five rockets instead of two or two birds calls down an air strike.

Drifting seems to be based on holding it rather than wiggling back and forth like in the more recent Mario Karts with you initially having a few sparks come out, then a larger stream and then that stream turning blue. I say seems to be because as I’ve mentioned there are no tutorials, there are no menus and so this is stuff I’ve had to figure out by playing and my knowledge of the genre. If someone had never played a kart racer before I’d imagine they’d miss a lot of the mechanics. I’m also not sure about the drift mechanic as generally in these sort of games holding a drift means that when you come out of that drift you get a speed boost, I think that happens here too as on a time trial I did get a better time by drifting but it doesn’t feel like you get a boost and there’s no sound effect to convey that anything has happened.

The sound effects in general are quite weak with your kart sounding like TV static and most races being pretty devoid of audio. Each zone has it’s own music track which aren’t particularly memorable but don’t irritate which is good as you hear them a lot. The visuals on the other hand whilst nothing special are quite charming though I’d have liked a little more stylisation (there are hints of it but it doesn’t cover the whole game) and obviously they don’t have the polish of a bigger budget title. 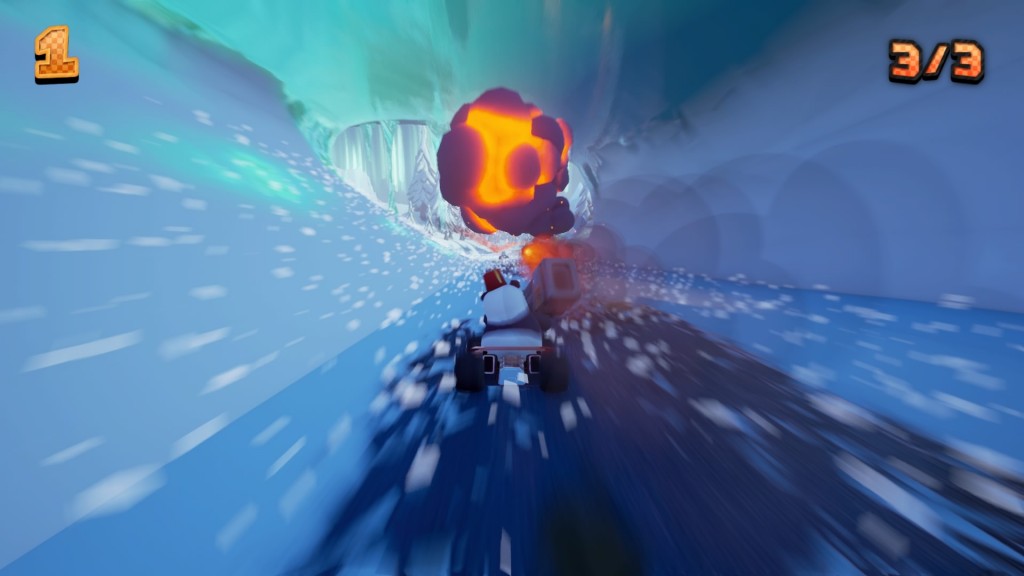 But how does it feel? The karts are very responsive and depending on the difficulty will move at different speeds. Easy mode is beyond easy so you’ll be able to just turn corners with ease and beat your opponents in your sleep whilst hard mode will require you to use your drift cleverly and use all the shortcuts you can find. The AI does feel like it cheats at the higher difficulty, one specific example might have been a bug but on an oval map with few shortcuts I’d lead the race for most of it and then at some point I’d just go down to second with no other racers in sight. This happened a couple of times until I decided that I’d purposefully hang behind in second and then take over the person in first and I had to actually slow down in order for this to work, but it did and I won. Was it a glitch? Overactive rubber banding? I don’t know, but it wasn’t fun.

Similarly picnic mode against AI is pretty painful. I could be in first picking up lots of food and then a stray fish would hit me and boom, I finish last. Against humans that sort of random element could well be a formula for success but against AI it is soul destroying. All you have on screen is a bar which fills up as you pick up food, larger food filling the bar quicker, but you have no idea where the food is, you just drive around hoping to find some and you have no idea how your opponents are doing so there is no tactical element to it, you just drive around hoping not to get hit by a random attack.

A map to show where food is appearing and an overall bar showing your standing in context would have helped here. Or simply make it time limited so you know if there are ten seconds left you have to try and grab as much food as you can or try to defend your first place position or attack the person in first. A map in the normal race mode would be nice as well, both to see the general shape of the track which can be quite complicated later on and with the camera too low to be able to see turns coming up sometimes, and to see where your opponents are.

Another odd decision is no rolling start for the time trial mode which means the first lap is always a dud and when tracks are a couple of minutes long then that’s a lot of wasted time. Cut a corner too tightly and crash and there’s nothing you can do other than complete the lap and try again, a simple reset with a rolling start would eliminate a lot of chore here. There are lots of little things that with a little more thought and attention could have elevated the gameplay. 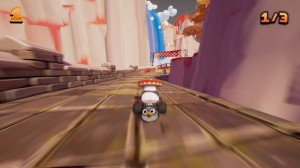 Between the AI not feeling fun to race against to the lack of menus meaning you spend as much time driving around outside of races trying to get into a race and little collision detection issues Bears Can’t Drift!? is a competent Mario Kart clone and the lack of competition on the system helps it but it’s far from great. No menus is an interesting concept but when a menu would allow me to retry a race instantly or even change difficulty, location and track in a matter or seconds whilst this hub world system means going back to the difficulty select (and for hard difficulty you have to drift around a narrow path and make a blind jump every time you want to select it) and then driving through each gate I know which method I prefer.

You can play all modes up to four player split screen which is unusual but very welcome in this day and age and there are still twelve karts on track. Unfortunately though there is no online so hopefully you have people to play with locally. This is probably the way to play the game and if you have this sort of set up at home then maybe add a point or so to the final score, but if, like me, all your gaming friends are on the other end of a modem then there is content in Bears Can’t Drift!? but it’s a little middle of the road.

Bears Can't Drift!?
5 Overall
Pros
+ Four player split screen is welcome in this day and age + Controls well + Decent amount of content if you want to collect all the stars and hats
Cons
- No menus just increases the time between races - No online - Playing the AI, especially in picnic mode, isn't that fun - Drifting doesn't feel effective
Summary
Bears Can't Drift?! They can, but they just aren't very good at it. The controls are good and there is lots of content but silly interface choices, unfair AI and surprisingly poor drifting let the whole thing down. Not a bad option if you have three mates over (and you don't own a Nintendo console).
We use cookies on our website to give you the most relevant experience by remembering your preferences and repeat visits. By clicking “Accept”, you consent to the use of ALL the cookies.
Cookie settingsACCEPTREJECT
Manage consent