Arkham City, and Arkham Asylum were both great games which reinvigorated the Batman franchise for the last generation of consoles.  With the less good Arkham Origins developed in house by Warner Bros Montreal it felt like the Bat-cow was in danger of being over milked.  Arkham Knight is back in the capable hands of Rocksteady and sets to finish off the story they started six years ago. 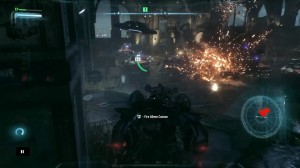 Being set a little while after the death of the Joker, Batman finds himself once again facing a city in full lockdown.  This time however the big bad is Scarecrow and a new villain, the titular Arkham Knight.  In order to defeat the villains Batman is able to grapple between buildings, glide with his cape and kick seven bells out of various thugs.  The biggest change on offer is the inclusion of the Batmobile as a driveable vehicle.  This both makes and breaks the game.

In order to justify the Batmobile it feels like certain compromises have been made.  What I mean in this is that the streets of Gotham feel wider and there are lots of fortunately placed ramps.  This makes Gotham feel more like a race track, rather than the enclosed gothic city of earlier games.  You’re also forced to use the Batmobile in certain missions and it can often feel shoehorned in when Batman gets stuck with a wall which can only be destroyed with the Batmobile.  There is also a lot of vehicle combat, and this is by far the weakest feature of the game.

Additionally the inclusion of the Batmobile has changed how you traverse the city.  In Arkham Knight Batman is more than capable of traversing the city on foot.  You can zip line to the highest tower and use the momentum of this to propel you into a glide, dive-bombing down to gain more speed.  This is one of the greatest joys of being Batman.  The views you get from up on high are breathtakingly gorgeous, and the draw distance is huge.  Using the Batmobile and your view is restricted to ground level and mainly full of massive explosions or particle effects from your latest collision.  This makes using the Batmobile feel frantic and the oddly floaty controls, of both the tank and car version of the Batmobile, only add to the feeling of barely controlled carnage.

Outside of the Batmobile things are very much as you would expect.  You’ve an open world to play around in, and you can chose to either progress the main story or get tangled up in any one of numerous side quests.  Often these side quests result in a showdown between Batman and a villain from the DC roster.  The variety offered by these side missions, and the unlockable character biographies really add a great depth to the game and they complement the main story very well.

I’ve alluded to this above, but the graphics on display here are fantastic.  Never has Gotham felt so real.  The way the rain interacts with Batman, the way the Batmobiles brakes glow red hot and the intensity of the explosions all add to make this a gorgeous looking game.  The detail extends to the character models which all carry a pleasing solidity to them.

Combat here is of the stealth variety, generally speaking if you go up against a thug with a gun you’re going to come out worse.  You’ll spend a lot of time creeping through vents, perching on ledges and shimming round corners.  However this is how Batman kicks arse, and in Arkham knight Batman is at his most capable yet.  The range of attacks and tools at your disposal is staggering, and the way you can link these together into longer combos and stronger attacks makes for a near perfect combat system.  Even my cack handed man hands were able to string together a decent combo.

The combat becomes the star of the show in the extra missions outside of the main game.  These are challenge missions where you generally just have to eliminate a certain amount of enemies as efficiently as you can.  Each of these carries a leaderboard and you can easily compare how shit you are compared to your friends. 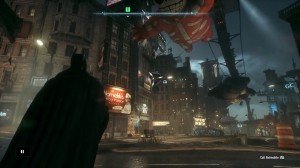 New to this game is the dual play combat system which allows you to control two characters in certain combat scenarios.  This works really well and with the press of a shoulder button you will seamlessly switch  to the other character regardless of what combat action you are in the middle of.  This adds a great new twist to the combat and allows you to do dual takedowns and fling thugs between your two characters.  It’s  shame this isn’t expanded upon, as the possibility of a fully two player Arkham game is a sweet one.

Overall this game is by far and away the best in the series.  It looks fabulous and really makes the PS4 shine.  The wealth of story missions and side quests on offer ensure this is a decently sized and the story is one which kept me engaged throughout.  Unfortunately the Batmobile almost breaks this game, partly because it’s terrible, but mainly because it messes with the extremely strong formula honed in the first two games.  However it’s testament to the strength of this formula  that Arkham Knight remains an outstanding game and one I can highly recommend.

Batman: Arkham Knight
8 Overall
Pros
+ Stunningly attractive game + Excellent combat + Detailed story which complete the one started years ago
Cons
- Driving the Batmobile - Fighting in the Batmobile - Racing in the Batmobile
Summary
This game is by far and away the best in the series.  It looks fabulous and really makes the PS4 shine.  The wealth of story missions and side quests on offer ensure this is a decently sized and the story is one which kept me engaged throughout.