As maligned as the visual novel genre is, I keep wondering if I’m going to come across one with a genuinely good story.  They do exist but I find the majority I encounter land in the same trappings that stifle my enjoyment of a good read.  The latest to cross my path is Autumn’s Journey by Apple Cider. Advertising itself as a tale about friendship, the genre stereotypes are all on display and it’s left me feeling disappointed. 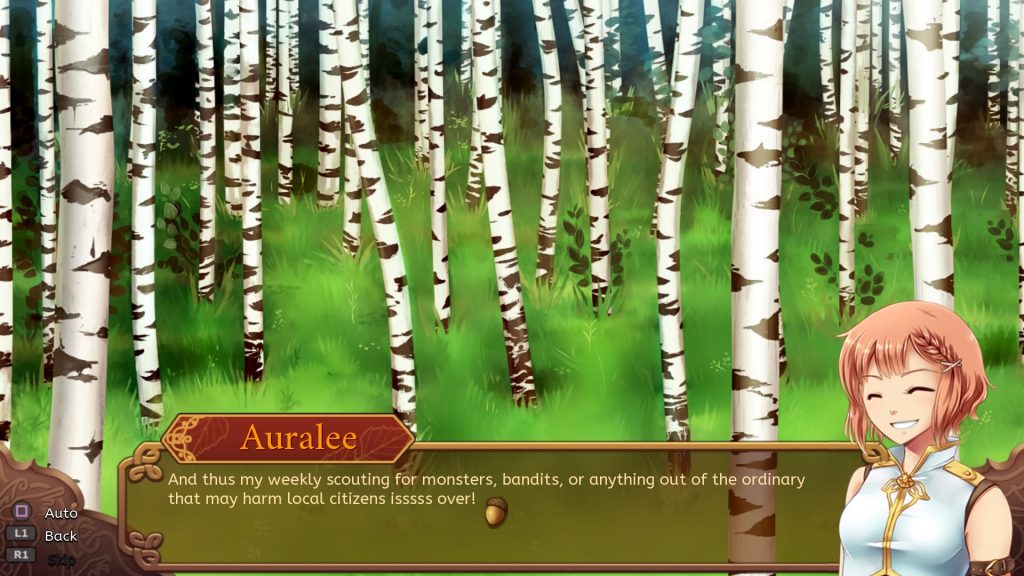 The story begins with Auralee, a wannabe knight looking to begin her training. Out on a scavenge, she runs into two Dragonkinds named Ilmari and Kerr. The former feels more feminine whilst Kerr brings more brawn to the table. In either case, they’re both struggling to adapt to a human form. Over the course of the next hour, she teaches them to read, the value of friendship and, if you’re so inclined, romance. If you had a bingo card on hand with all the visual novel tropes, you’d be close to a full house. Aura is a fairly energetic young lady with a very outgoing personality. The two Dragonkind trade heavily as fish out of water.

This leads to our heroine teaching her two companions how to engage in some very human social interactions. In return, the dragons share some of their customs. It’s been done to death in the genre and it kind of tires me to see the same framing device used to crowbar characters into friendship. There’s not a lot of nuance to it and the story plays out so swiftly that there’s not a lot of time taken to develop them. 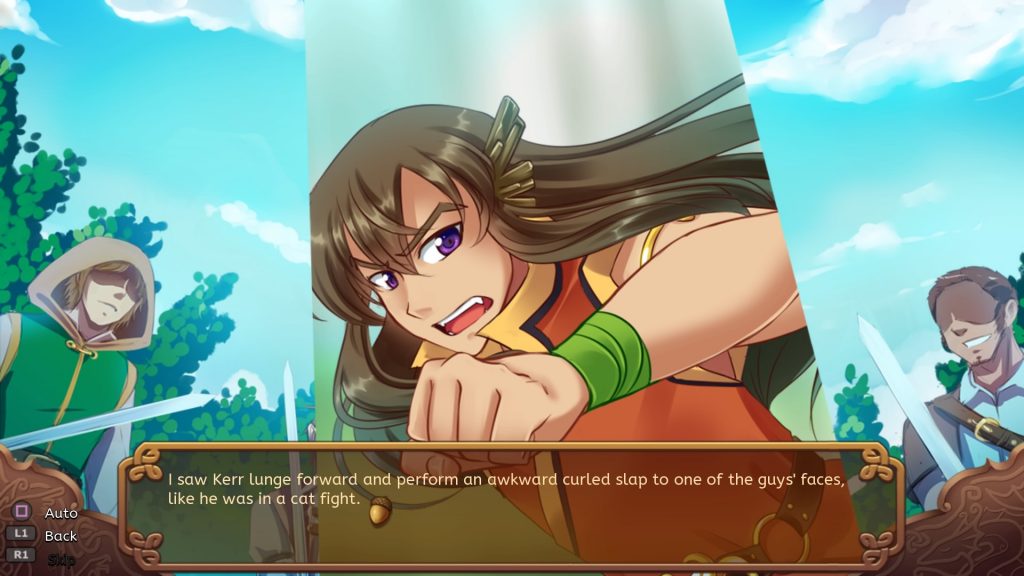 It’s not a big cast with only Aura’s mother making some sporadic appearances. Mothers in these stories tend to either exist to look important or to lay down some facts of life. In this case, her name is Lady Boyard and she’s essentially a village protector. Tonally, it’s all very light. Auralee’s adventure doesn’t really twist or turn and there’s very, very little danger on the horizon. There’s no strife, no real journey and it just makes the conclusion fall flat. As the one definite adult in the tale, Lady Boyard doesn’t seem too concerned about her friendship with two dragons. There’s no real heart to hearts, no caution and she comes off as fairly absent.

There’s three endings on offer and getting there involves a handful of dialogue choices. It feels light on decisions but there is a job-hunting interlude that at least frames the choices your making as impactful. The jobs are divided up by the two men and these errands ultimately help push their relationships further. There’s a real opportunity to flesh out the characters which is rushed through.

That’s my biggest problem with the writing of Autumn’s Journey. It’s a well-worn tale to portray a friendship and there’s no time taken to really give it some substance. The fish out of water caveat makes it harder to sell. I would’ve loved to have seen a more human story instead of the cast being befuddled by each other’s customs. It’s something of a cop-out when a more human story is potentially more relatable. 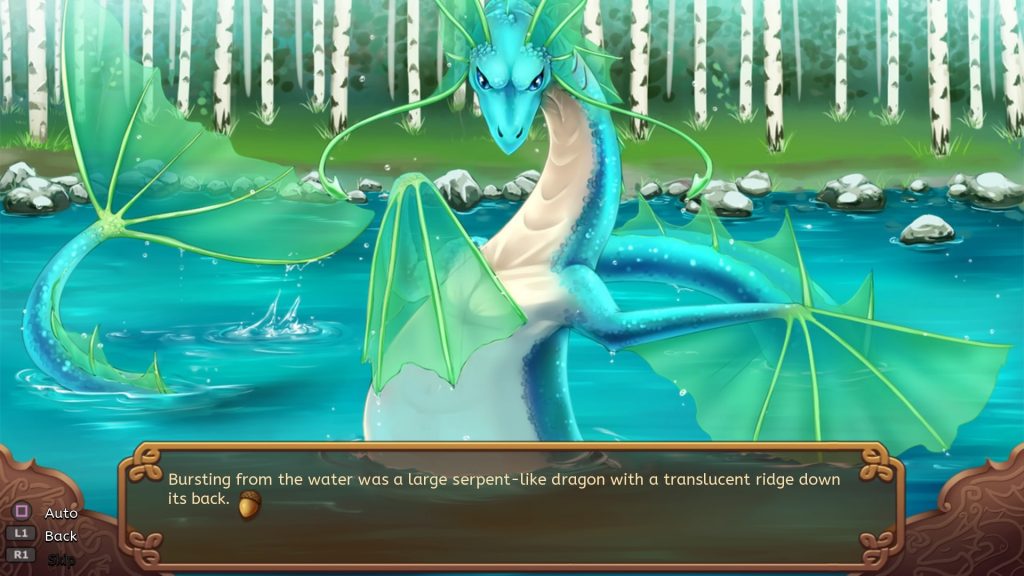 Of the three endings, the friendship ending lands better than the romance ones. The idea of these three staying friends, after the time they’ve spent together tends to fit better. Whilst the story feels rushed, the characters do get along, almost too well. The romance feels more forced and borders on something a touch creepy. It doesn’t help when the male leads are shape-shifting mythical beasts.

Visually, Autumn’s Journey has plenty of bright and colourful artwork. It fits in with the cheery, worry-free tone of the story and it’s not all static. There’s some decent use of Chibi animations to portray some of the game’s more interesting moments. At times, it looks playful and does help take your attention from the text scrawl.

Voice acting is used sparingly but it utilised enough to give the portraits a greater sense of character. That’s helpful when the cast carry the same traditional anime look to them. The male characters are predictably androgynous, Lady Boyard is a taller version of Auralee. They’re costumed in fairly standard fantasy attire and the only giveaway from the two dragons are their ears. It’s not new or exciting but it does at least bring some vibrancy to the screen. 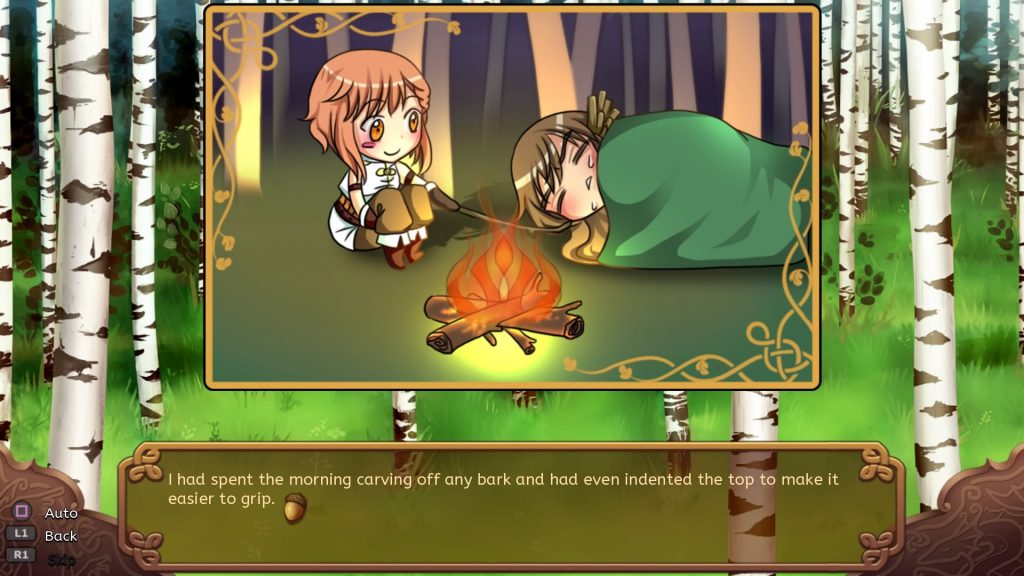 The same goes for the backgrounds. There’s a handful of locales on use and they all show varied environments. The pace of the story does mean the scenes don’t outstay their welcome. There is a good sense of a journey here, although very little of it feels autumnal to me. It would’ve been nice to see the leaves turn or at least some indication for the passage of time.

Autumn’s Journey doesn’t do much to interest me. It plays it very safe with the genre conventions and delivers a story in a hurry to deliver a happy ending. The art is bright and the animations are charming but the writing lacks substance. Predictability isn’t a problem if the characters are given the right attention to flourish but there’s no strife, nothing to really make this feel like a real friendship. It’s all too convenient and struggles to feel earned.

Autumn's Journey
5 Overall
Pros
+ Bright and vibrant backgrounds.
+ Visually interesting with some actual action scenes.
+ Cheery music.
+ Some interludes help frame your choices well.
Cons
- The relationships go way too swimmingly.
- Very, very stereotypical genre fare.
- The conclusions don't feel especially earned or hard fought.
- Not that much in the way of decisions to take.
Summary
Autumn's Journey is a story of friendship you've already heard before. In spite of the cheery visuals and pleasant tone, there's nothing refreshing on offer. The story barrels along into an inevitable conclusion with very little meat to subsidise the fluff. Having characters that are otherworldly dilutes any chance of a more relatable, human interactions and it starts to feel very contrived. It results in relationships between characters that are all too accommodating to go along for the ride.