It may not carry the same weight that it did forty years ago but the name Space Invaders is still huge when it comes to gaming.  It is considered to be one of the great grandfathers of gaming.  Not the first arcade game by any means but the first to catch the public’s imagination, the first to catch fire.  If you’ve been living in a cave for forty years or were born in the last twenty, the game was a single screen shoot ’em up where you were at the bottom and waves of alien ships were at the top.  You had to destroy them all before they reached the bottom and that was about it.

In reality, the original coin-op game was slow, tedious and unexciting and was soon superseded by better games such as Galaga, Galaxians and Phoenix but each of those games owed Space Invaders a massive debt and the game’s iconic sprite designs are still works of minimalistic art.  Of course, any good arcade classic has to be revisited over and over and that has certainly been the case with Space Invaders.  Aside from all arcade sequels, the game has had its share of console remakes, reimaginings and spin-offs too.  This compilation, Space Invaders Forever, brings together three of them in a new compilation.

While all three games on this compilation get equal billing, Space Invaders Extreme is the most important of the three.  This game takes the original single screen format but injects new life into it.  While you are still at the bottom and shooting upwards, the game has a focus on scoring that gives it a lot more depth.  It’s all about getting combos.  Taking out a column of enemies, a group of similarly shaped enemies or those of the same colour will improve your combo, adding to your score.  Instead of just randomly taking out waves, you’ve now got to be more considered in your approach.

It’s not just about scoring though, the game also has branched routes, similar to the Darius games, but these are gated by level rankings.  If you want to get to the harder levels, you need to score highly to unlock them.  This adds a degree of skill and strategy that Space Invaders definitely benefits from.  The added depth is appreciated and makes for a smarter kind of shoot ’em up.  It’s still just Space Invaders though and so the limited movement of your space cannon might be less satisfying to you if you’re a fan of some of the more action-packed shooters on PSN.  However, dedication and practise do make this one of the more rewarding shoot ’em ups that you can play, you just need to put the time in.

Where the game excels is in its bombastic presentation.  The visuals have come a long way from the monochrome display of the 1978 original.  The game uses colour as a core mechanic and the backdrops are pure neo-retro craziness but never to extent that they obscure the action.  The in-game music is great also and adds a sense of excitement to the proceedings but, overall, players may still find the gameplay a little staid while fans will be wondering where the local co-op mode has disappeared to, given that the game had that on its Xbox 360 port. 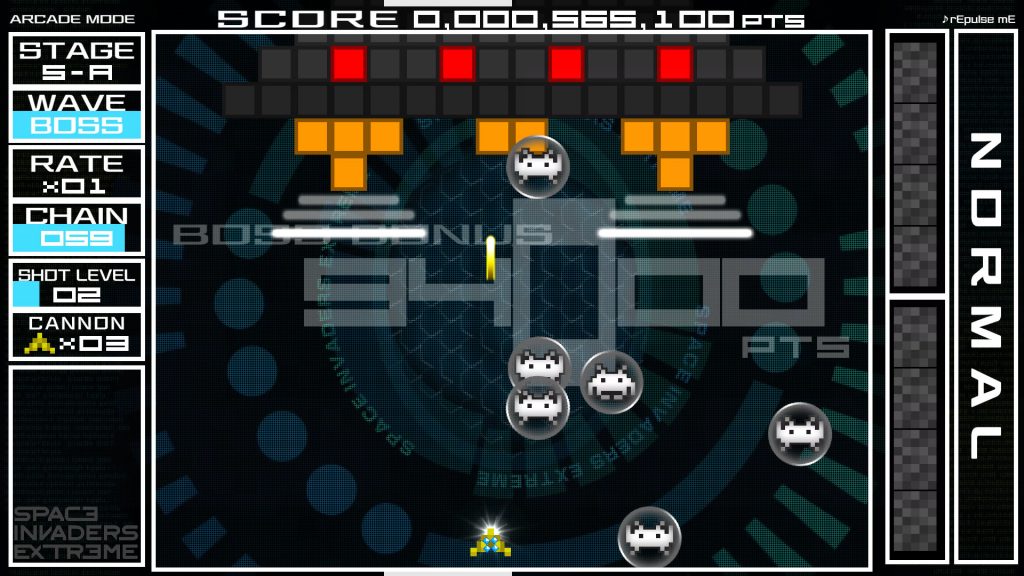 Where Extreme aimed to breathe fresh life into the series with new mechanics and bold presentation, Gigamax 4 SE takes a different approach.  This game is a more traditional Space Invaders experience, using similar gameplay and presentation to the 1978 original but now adapted for multiplayer.  It allows up to four players, in local co-op, to take on a familiar, but wider, version of Space Invaders.  Of course, finding three other people to play a Space Invaders game isn’t an easy ask at the best of times but during a global pandemic, it’s even harder.  So we tried it with two players.

So yes, this is Space Invaders but with a number of levels that rotate in a three level format.  The first is pretty much standard Space Invaders.  You’re playing for points here and aiming to shoot more enemies than the other people sat on your couch.  The next stage is more like Galaxians with invaders taking swirling paths as they drop down towards you.  Each three-level sequence ends with a boss level.  Here you and your fellow players have to take down a boss but if you work together, by occupying the same space and shooting at the exact same time, you’ll do more damage.

The problem is that this game is pretty awful.  Firstly, it’s Space Invaders and that’s not great.  You’ve got the limited weaponry of the original game and that makes you feel underpowered and weak.  The Galaxian type stages aren’t much fun either and feel random and chaotic.  The real issue is the boss battles though.  These are tedious and miserable and the co-op aspect doesn’t really work due to the timing needed to synch up your shots.  We hated it.  The music was good though. 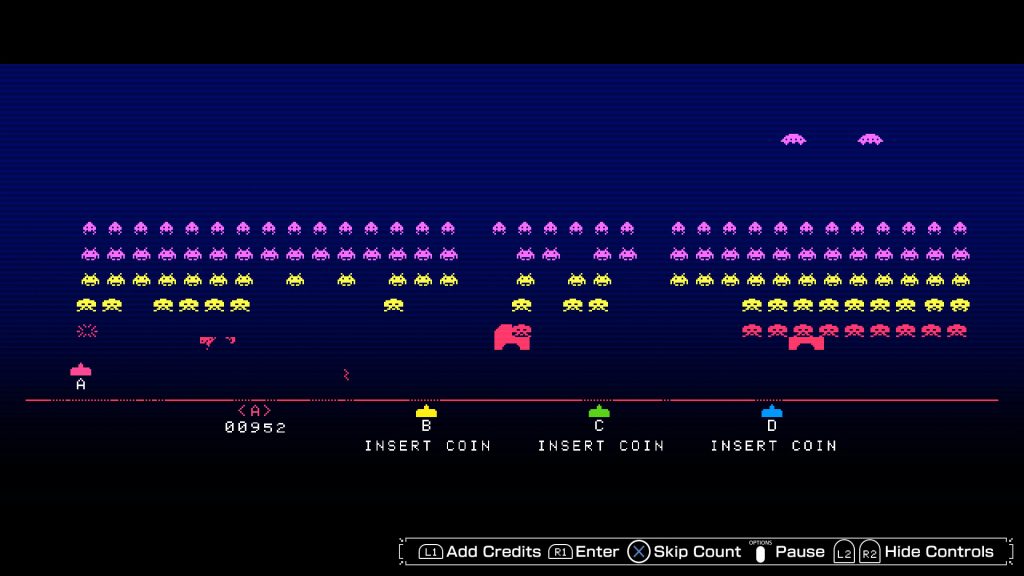 This one is a real curio.  A 2017 mobile game originally, this cross-over with Taito’s iconic bat and ball game Arkanoid is really unusual.  It cleverly mixes both games.  You play as the bat from Arkanoid but instead of bouncing back a ball, you bounce back bullets that are shot by the Invaders above.  Each level has a time limit and you need to clear it out before your time runs out.  You can angle your rebounds to try to hit those hard-to-reach aliens and power-ups can be activated to aid you.

Interestingly, while you are controlling the Vaus, the bat itself, you can play as various different pilots who all have different special abilities.  What’s great is that these are characters from other classic Taito games such as New Zealand Story, Chase HQ and Bubble Bobble.

Of course, being a mobile game originally this was designed for touchscreen play and to get around that Arkanoid vs. Space Invaders uses the touch pad of your DualShock 4/Dualsense controller to control the Vaus.  This isn’t great.  While it’s fairly responsive some of the time, it’s not the most accurate thing and triggering some special attacks is a nightmare.  The menus use a mouse-style cursor (controlled with the left stick) which just doesn’t feel right.  It’s like this is a port and not a game that has been rebuilt, or at least adapted, for the PS4.

The other issue is that the game has 150 levels (300 if you include the hard variants) and they only really get challenging around level 20.  After that they can be a bit of a pig to get through occasionally but in a weirdly inconsistent way.  It’s too many levels though and you’ll likely be bored long before you finish it (or just too frustrated by the controls to bother continuing). 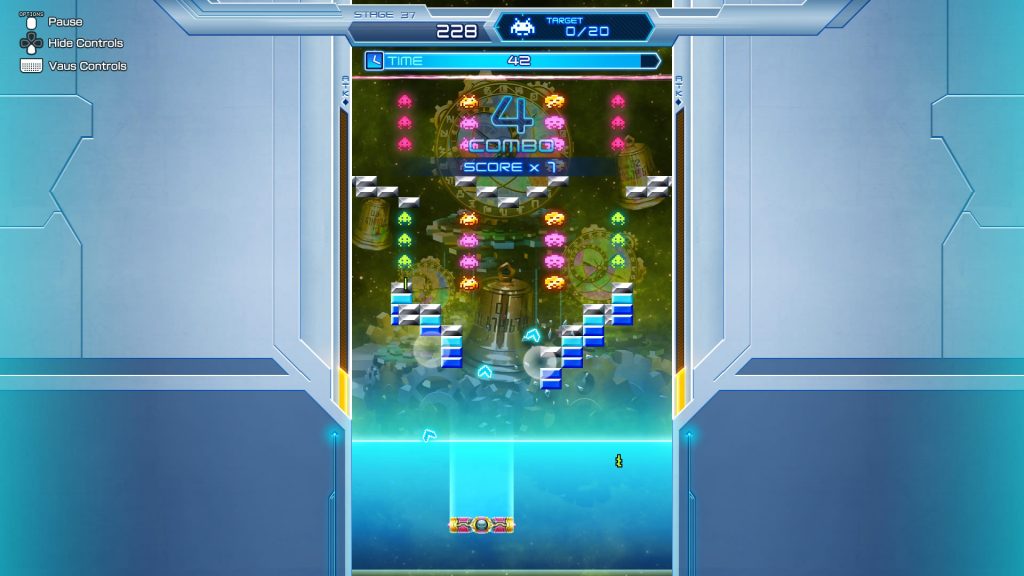 As a compilation, the other big problem here is that it all feels a bit lacking.  We’re happy to see these type of obscure releases but why not tack them onto a compilation that has all of the mainline Space Invaders games too?  They did that for a Nintendo Switch release (Space Invaders Invincible Collection) a while back and we can’t understand why they’re only offering us three games here.  But more than that, what we would have really been happy to see is the best game in the series, Space Invaders Infinity Gene which was a brilliant game that could definitely use a re-release.

Space Invaders Extreme is the best game here and it has always had its fans, so if you’re picking up this release just for that one, you’ll be happy and can treat Gigamax and Arkanoid vs as the museum pieces they are but we can’t help feel that Taito could have done more here (as they have with previous compilations) and in terms of extra content (artwork, series info, behind the scenes stuff) there’s none of that, which ultimately makes you ask who this compilation is actually aimed at.

Space Invaders Forever
7 Overall
Pros
+ Space Invaders Extreme is still good
+ Is definitely a curious compilation of lesser-known games
+ Some good presentation and music
Cons
- Gigamax 4 SE is pretty dull
- Arkanoid vs. Space Invaders is let down by clumsy controls and is repetitive
- Local co-op only in 2020?
- Compilation lacks content
Summary
This curious collection of Space Invaders titles brings together the reasonably well-known, and well-liked, Space Invaders Extreme with two fairly obscure other titles but we're left scratching our heads as to why Taito didn't include games from the original arcade series or better games like Infinity Gene. Instead you've got a decent game and two others that no-one asked for but die hard Space Invaders fans should get something from this compilation.