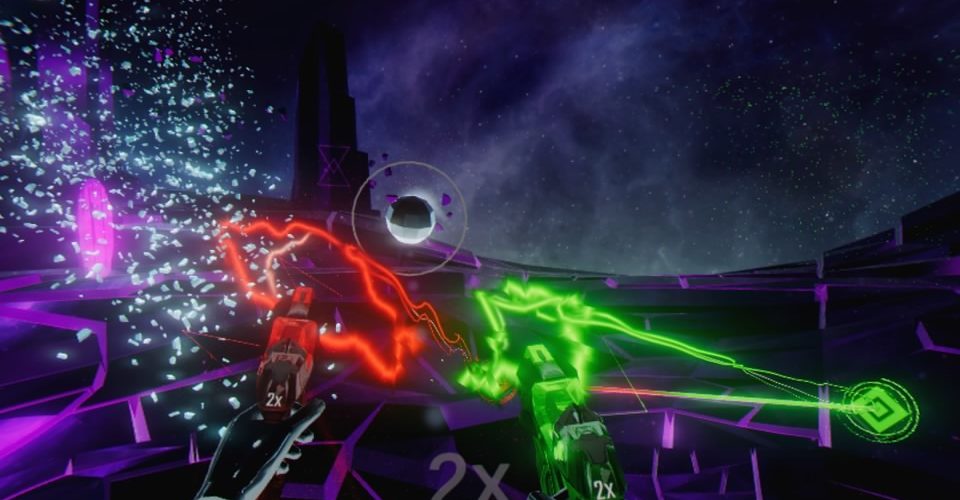 While Beat Saber continues to enjoy its considerable  success Harmonix, the granddaddies of the modern rhythm action genre, have put out Audica which shares a fair bit of a DNA with its lightsaber inspired peer but comes at it from a more hardcore aspect.  What does that all mean?  Well, let’s fine out.

Eschewing any sort of plot, this PSVR-only game is a Move-mandatory title that crosses the rhythm action genre with some straight up shooting gallery gameplay.  Each Move controller is represented in-game by a gun and you use these to shoot targets which are timed to the music.  On a basic level, you just aim, wait for the beat and shoot.  However, the game introduces a few variations on that right away and so playing through the short tutorial is definitely recommended. 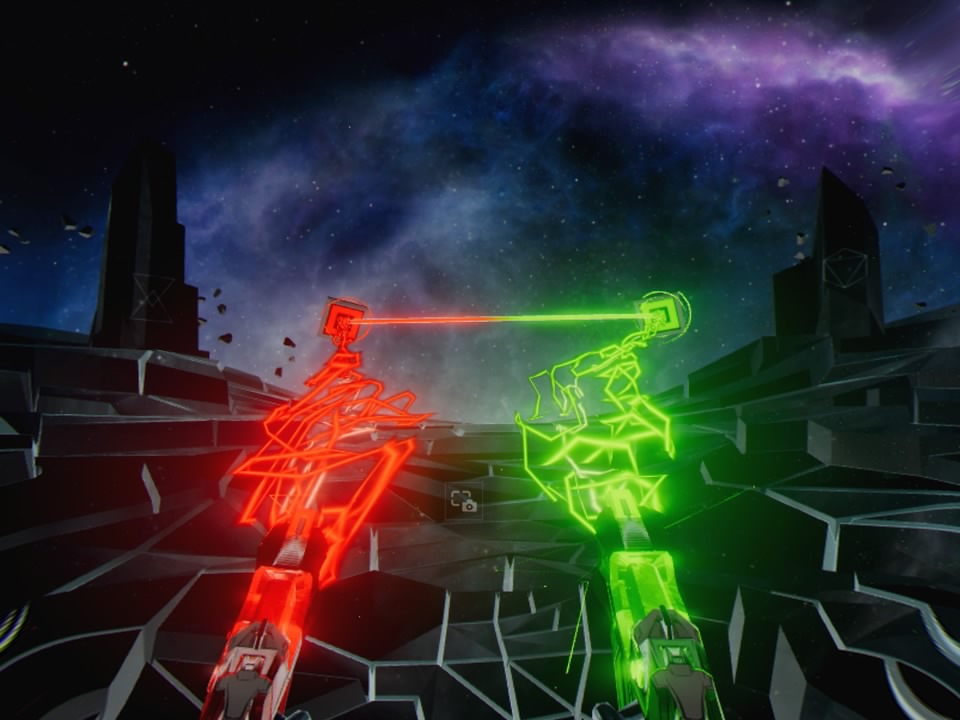 Aside from the normal shots on the beat, you also get held notes where you hold down the trigger (as well as sequences of notes that you have to follow with the trigger held down) as well as shots where the gun has to be oriented either vertically or horizontally (the way idiots hold guns in gangster movies and hip hop videos).  You also have other notes that fly towards you and have to be hit with a melee-style swipe of the controller.

It’s actually all very straightforward but when the songs get going and the difficulty is upped, it can be a little overwhelming.  Much like Beat Saber, this game can be enjoyed by anybody on the Beginner difficulty, playing it ‘on the fly’ with no previous knowledge of the tracks, but when you go past Standard up to Advanced and Expert difficulty, you’ll soon find your mental and physical attributes being very heavily tested. 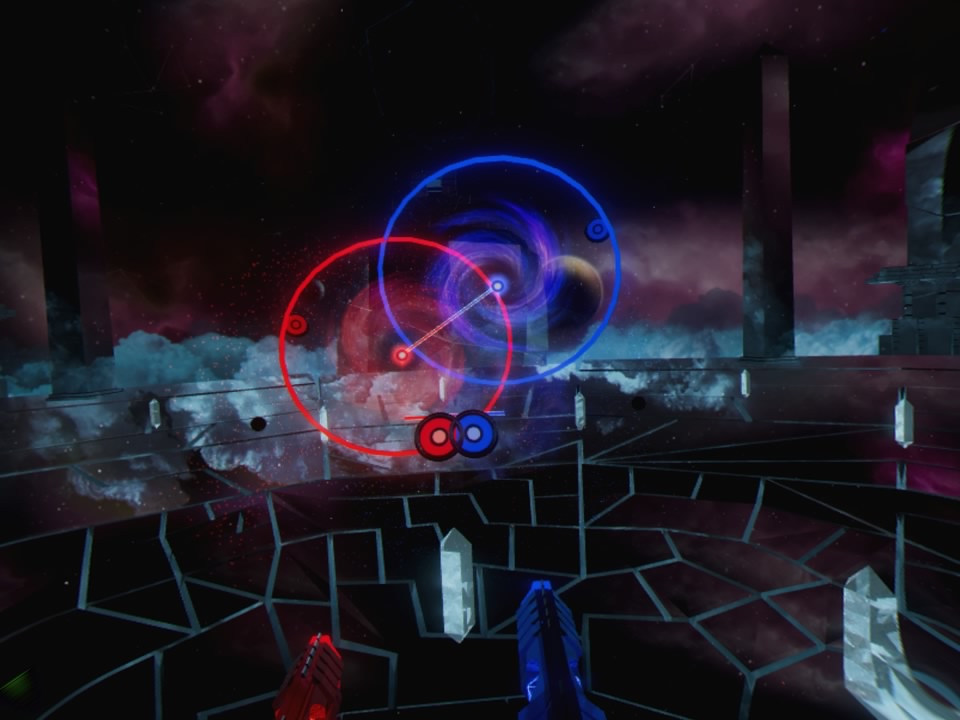 Thankfully, the controls are spot on.  The timing felt correct right out of the box, with no calibration, while the aiming also felt accurate too.  You are scored on both your timing and your accuracy and when it goes wrong, that’s on you.

Being a rhythm-action game in the late Onesies (is that what we’ve been calling this decade?), the tunes are essentially all EDM with big beats and heavy basslines, and all produced within an inch of their lives.   Harmonix will be supporting the game with DLC backs and a season pass, so hopefully there will be some experimentation with genres but out of the box the thirty plus tunes are all a bit stuck in one genre.  We’re hoping for either some ’90s dance music, some old school drum and bass or even some stuff with guitars in it but the music is bold and pounds down the earphones. 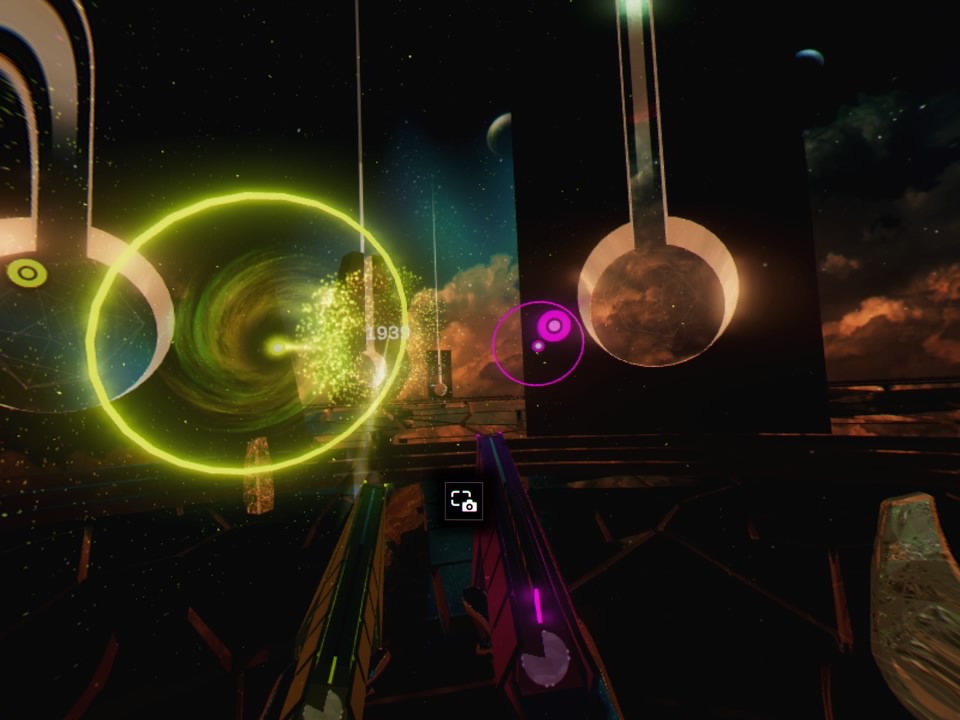 This is all backed up with some bright visuals which represent the action nice and clearly and there’s some nice customisation that lets you pick your guns and colours.  But we’ve seen the Tron-style look a lot in the PSVR space though and the static arena backdrops are a little bit dull to be honest.  After the likes of Rez Infinite, we always hope for games to reach that bar visually and while Audica doesn’t get close, at least it looks good at what it does.

As ever, Audica, much like Beat Saber, is a game that will appeal on two levels.  As a fun party game, people will get it, especially with the music blaring and people falling over and hurting themselves on the furniture but as a single-player game to master, there’s a lot to get good at here.  The game rewards practise and patience.  If you just want to get through the tunes and unlock the later arenas in a hurry (like we had to for the review), it can all get a bit samey.  But if you settle on a tune, up the difficulty and learn your way through it, the game becomes a better, far more rewarding experience.

That said, there will be a skill barrier there that some people just won’t get.  Much like how some of you were dominators at Guitar Hero while others struggled to get that fifth finger going for the slightly harder difficulty.  But if you’ve had fun with Beat Saber, then this game will probably appeal to you.

Audica
8 Overall
Pros
+ Lots of tunes on offer
+ Controls are spot on
+ Good rhythm action gameplay
+ Rewards skill and persistence
Cons
- Visuals are a little lackluster
- If you've already got Beat Saber, this doesn't offer a whole lot more
- Song list is a bit samey
Summary
As expected, Harmonix's take on VR-powered rhythm action has a lot going for it thanks to smart gameplay and very accurate controls. All of which makes Audica a game that could be a party favourite as well as a single-player obsession.