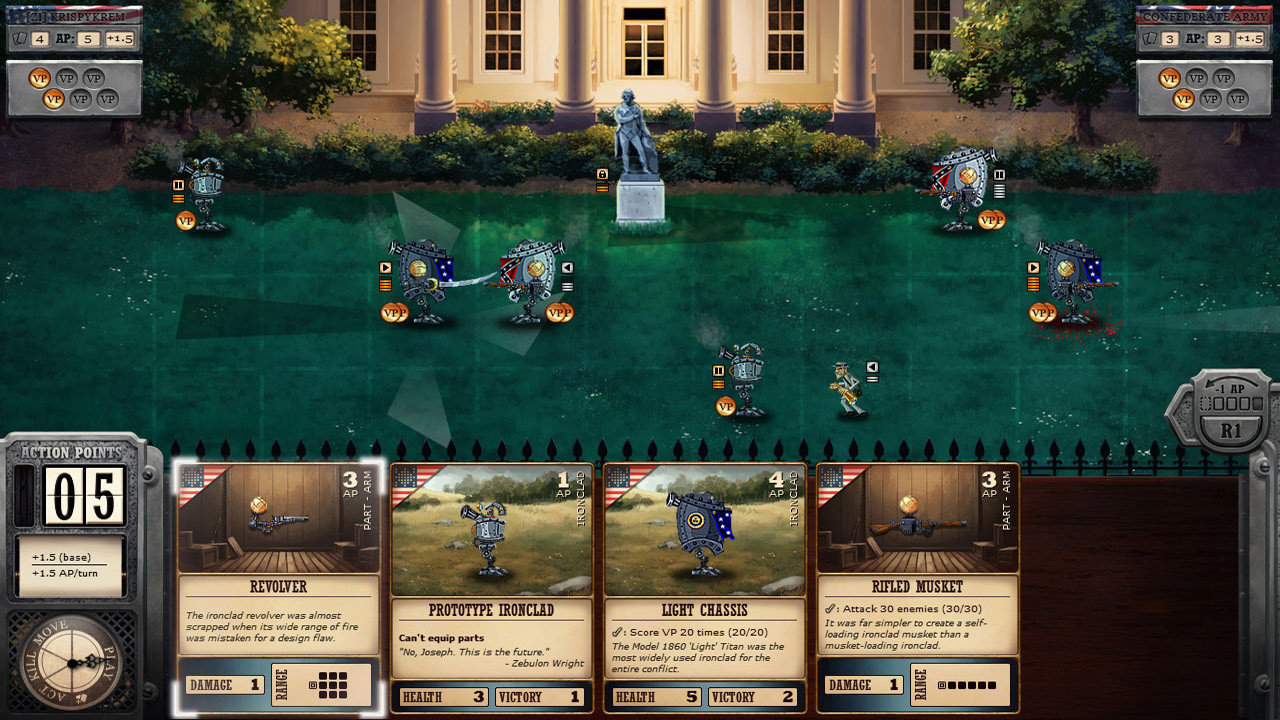 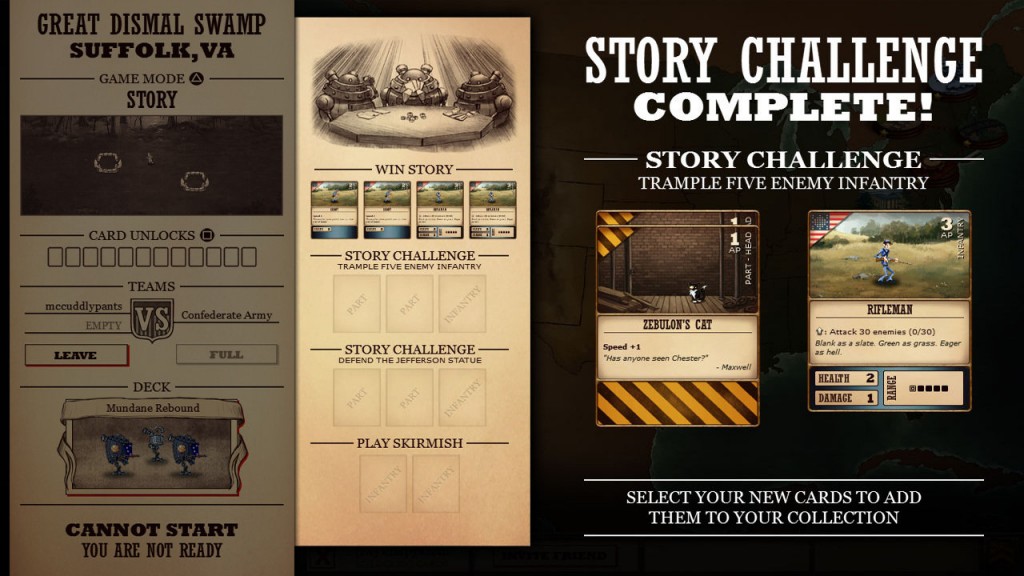 Ironclad Tactics is a card battle game with an interesting take on history.  Being based in the American Civil War this game introduces giant steam-powered mechs and it’s up to you to command these through the cards you get in your deck.  Not really knowing much about the American Civil War I’m hard pressed to tell you which side you play as, but I think you play as the Americans.  The story is told through comic strips which bookend each battle, and is sort of reminiscent of the Penny Arcade comics.  I quite liked the style used and am sure there is a lot to the story, but I found myself getting bored with it and glossing over whole sections.

Before each battle you get to choose the twenty cards for your deck.  However unlike other card games where your cards are effectively stationary once placed, here your cards, or units,  will move across the board on each turn.  This is where the battle element comes in as your opponent will slowly make their way across the screen fucking your shit up in the most calculated of ways.  You win points by getting your units to the other side and it’s a bit like a two-player Plants vs. Zombies if both teams played as the zombies and the zombies were steam-powered mechs.

To keep things moving the game has an automatic turn counter which constantly clicks down so you have limited time in which to make your move.  This means you’re left thinking on the fly and using all your tactical prowess to outsmart your opponent.  The battles are often fierce and the AI is remorseless as it moves towards you one space at a time.  One wrong choice can leave you open for the aggressive AI.  It’s like watching a slow car crash as you can see the problem coming towards you but have no ability to avoid it as you fucked up a while back.  In fact you often need to test run the level to get a feel for the units the enemy will use before going back with a tailored deck. 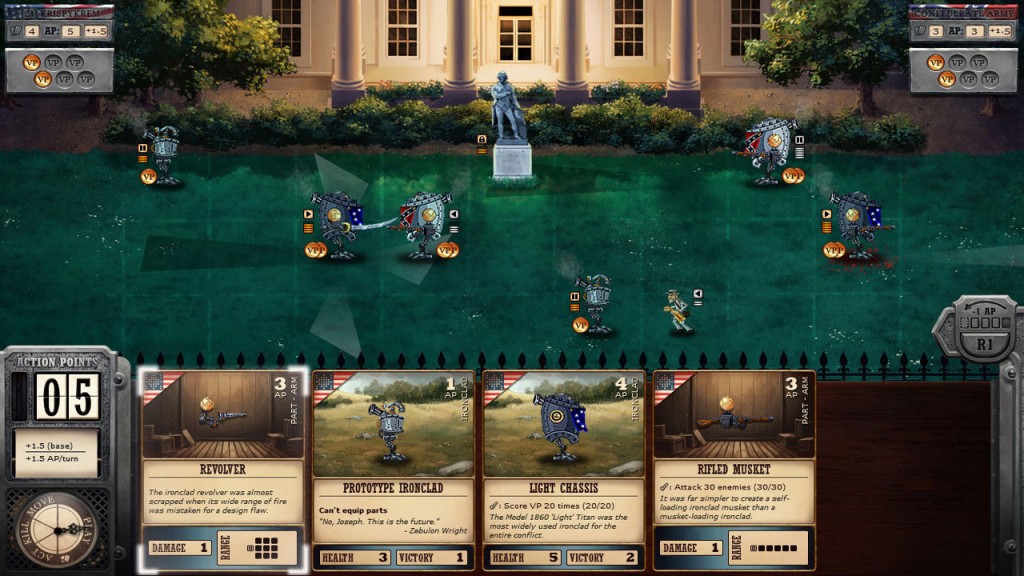 This is a problem as the difficulty can feel unfair, it often feels like the AI has the perfect deck for the level, sometimes even introducing units you’ve never even seen before.  There is no way for you effectively plan before the level and this often leaves you being shafted on your first play, which is no fun.  To say the difficulty spikes sometimes would be an understatement.  Also the general difficulty is compounded by the vast quantity of cards on offer, and the many variations of some of the standard units.

The sheer range of cards on offer is somewhat daunting which isn’t aided by the fact the text on the screen is fucking tiny.  Now I’m no Mr Magoo but the text used throughout this game is miniscule.  Considering this game uses a lot of text, both in its story elements and in its descriptions the fact I struggled to read most of it is a big fucking problem. 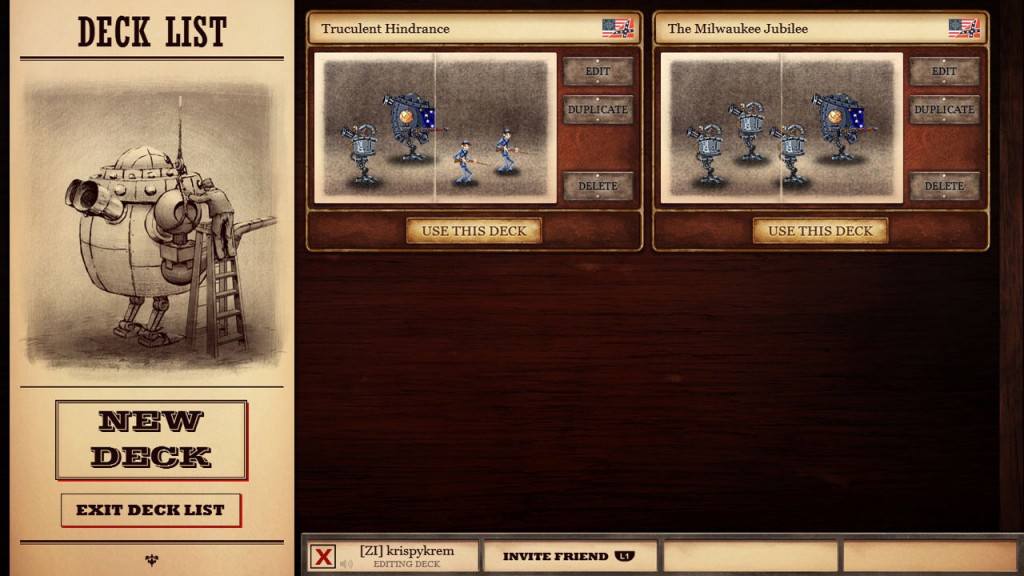 A further problem here are the controls, the menus feel like they were developed for use with a mouse with little thought given to using a controller.  When you load up the game you are greeted with a mouse cursor hovering over the menu but don’t have total free control over this, instead just being allowed to flick between the various headings.  In battle this is also a problem, as you don’t have the freedom of movement offered by a mouse, and sometimes the moves you need to make take just too long to set up.  This is compounded by the fact the clock is constantly clicking down on your turn and you feel pressured to get the right move in.

Capping off the game is a range of challenges based on each level you play, either puzzle based where you have a limited card set or skirmish based where you go head to head with an online player.  I got much more mileage out of the puzzle modes as I found it hard to locate opponents for the versus mode.  You also have a two player co-op mode which again suffers from lack of players.

I’ve never played anything like this before, it takes ideas from a range of games and topics and is an interesting enough concept.  The developer Zachtronics Industries should be applauded for taking such risks.  However overall the game is let down in the execution, the controls feel somewhat clunky on a control pad and the difficulty spikes make for an uneven game.

Ironclad Tactics
5 Overall
Pros
+ Unique gamestyle and implementation
+ Lots of gameplay for your money
Cons
- Difficulty spikes can feel unfair
- The AI often had an unfair advantage
- Text is too small and the story drags
- Clunky controls, would be better suited to a mouse or touchscreen
Summary
I’ve never played anything like this before, it takes ideas from a range of games and topics and is an interesting enough concept. The developer Zachtronics Industries should be applauded for taking such risks. However overall the game is let down in the execution, the controls feel somewhat clunky on a control pad and the difficulty spikes make for an uneven game.