I don’t know what I expect from visual novels any more. I keep wondering if I’m ever going to be given one that’s got more intrigue and a story that will actually grip me. I came into this genre well aware of the stereotypes and Angels with Scaly Wings hammers those conventions right home. Radical Phi has tried to author something meaningful and complex. Boasting an apparently unique tale of dragons, crime and time travel, it feels anything but interesting as I desperately try to avoid inter-species relationships. 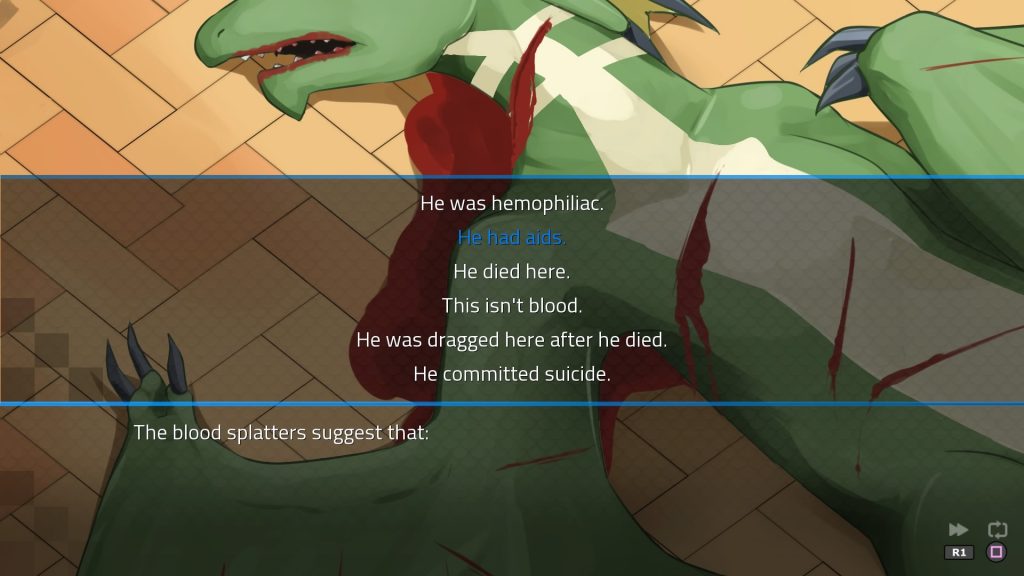 The crime-solving aspects almost provide something compelling. You play a nameless protagonist who is teleported into the dragon world to solve a murder and act as an ambassador. It’s another fish out of water scenario which I’m fairly tired of. The genre lives off them but I don’t see how this couldn’t have achieved with a completely human cast. The opening at least does well to introduce you to your police associates. It gives the story a running narrative and the investigation, whilst completely lacking in interactivity, does give you something to focus on.

The majority of the cast are, as you’d expect, dragons. They work straight-forward human jobs in human living conditions but they’re dragons. They have human problems and complain about staircases being not suited for dragons, despite the fact they built them. Most visual novels at least try to play up some element of culture shock but, given these dragons live similarly to us, there is no real need to push that. Aside from one awkward conversation about tails, these mythical creatures could’ve just been people. 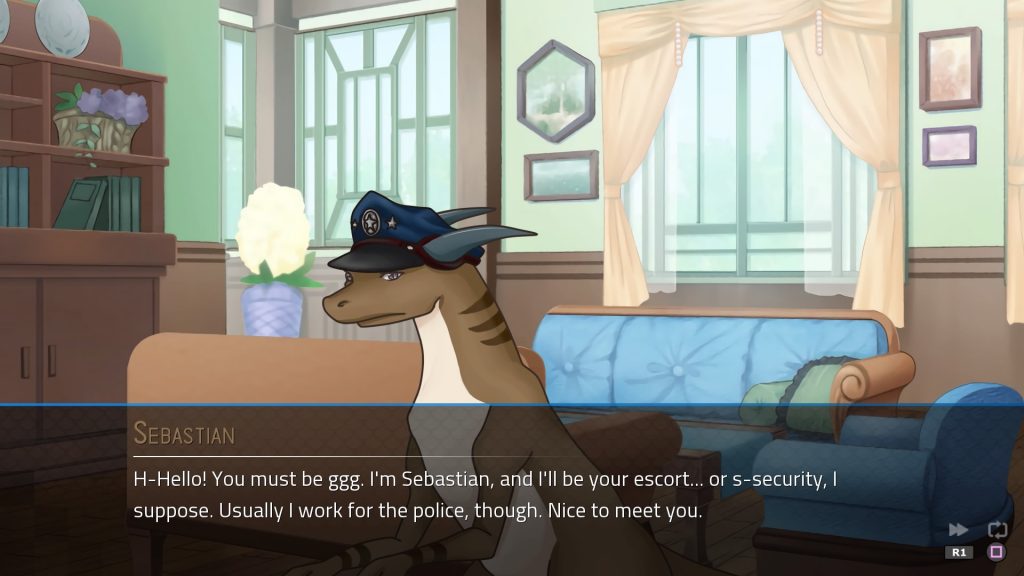 Whilst the crime angle initially shows some promise, it seems to take a backseat to the relationship building with the fellow cast members. I don’t feel like a case in unfolding and I don’t feel any build or culmination of any sleuthing. There are two investigation sections which ultimately fall flat. It’s one of the few examples of actual police procedures slipping into the script and it’s a shame that wasn’t the driving force behind Angels with Scaly Wings.

Instead, you have a lot of small talk. The usual visual novel tugs of meeting characters for the sake of knowing more about them. There’s a decent pool of characters but, police aside, there’s not a lot to them. Bryce is the police presence I spent the most time with and his major trait was that he liked a drink. So you can drink with him. Adine is fascinated with human myths so there’s dialogue written around that.

To the game’s credit, there’s a lot to uncover. Your main culprit has his own motivations and secrets. In fact, everyone seems to have something to hide. It’s unfortunate you need multiple playthroughs to piece them together. Maybe I picked the wrong choices on my first run but I gained very little from my first adventure. Paths seem to vary with new scenes shedding more light on who’s doing what. I appreciate it but it doesn’t grip me as much as it should. Each playthrough uncovers new knowledge but it makes revisiting the story a necessary to requirement to reach a true ending. 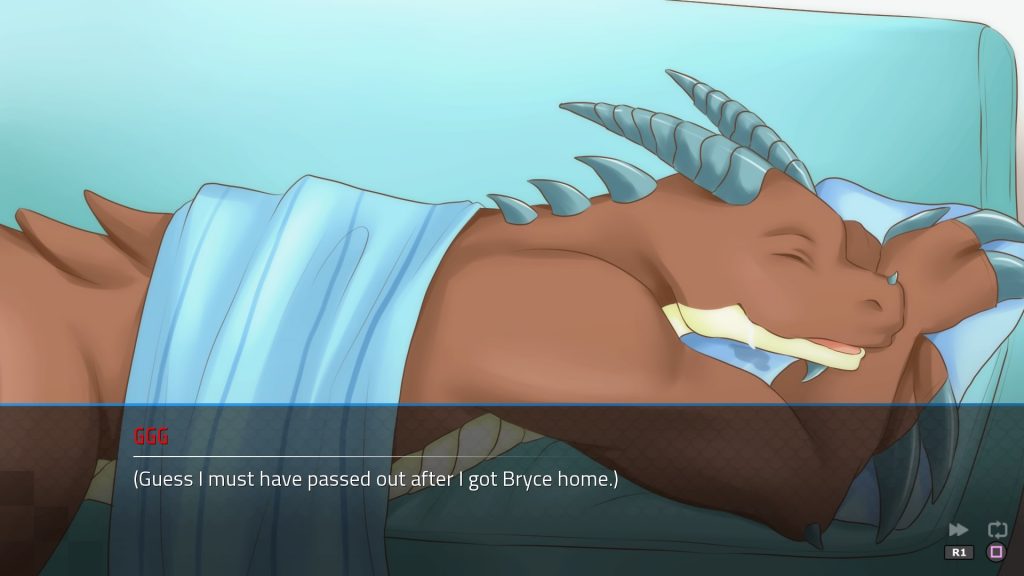 Maybe I can’t quite sink my teeth into quantum entanglement, black holes but it’s hard to settle on a tone in this game when you’re being really, heavy-handedly coaxed into inter-species romance. You want to know how you settle that argument about tails? Take your clothes off. That’s not what I’m after. Remy can drop physics on me whenever he wants but I do not want to kiss or grope him for the opportunity. You’re given that option within seconds of meeting the elderly professor. That’s not how relationships work.

Visually, the use of multiple artists shows. The backgrounds are well done with a great sense of detail. Sadly, they are in stark contrast to the much simpler character portraits. The humans carry a traditional anime aesthetic whilst the dragons, whilst varied and distinctive, look rather childish. It’s rather funny to see them dressed in lab coats, police uniforms and work clothes but the use of several artists hampers any cohesion of style. 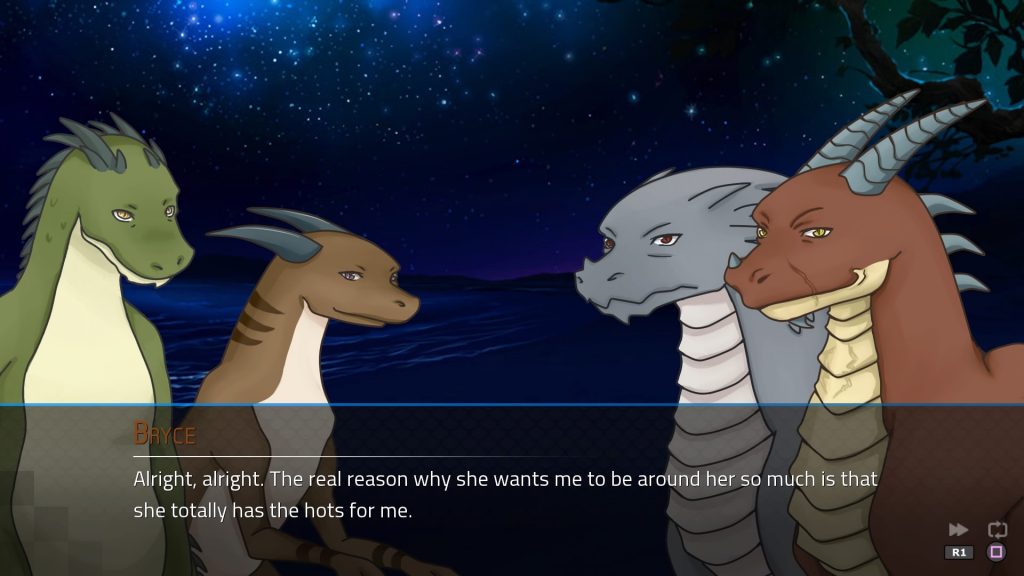 Music fares better. It’s not spectacular but does well to portray mood. The dating themes are kept light and airy whilst the crime scenes and the game’s climax has a tense soundtrack. Overall, it’s well presented but not really providing much in terms of animations and changes of scenery.

Angels with Scaly Wings is, sadly, a dating game that is all too willing to hurl you headlong into a relationship. There’s very little build to it and, whilst there is character building and a complex plot to uncover, multiple runs are required to see it. The visuals lack a cohesive aesthetic with multiple artists on the job and, whilst the crime and sci-fi is relatively compelling, it takes a backseat to the dating.

Angels with Scaly Wings
5 Overall
Pros
+ Potentially interesting sci-fi narrative.
+ Detailed backgrounds.
+ Plenty of characters to interact with.
+ Multiple endings give you reason to replay.
Cons
- The dating feels forced and very heavy-handed.
- Multiple artists on the job leads to a lack of visual cohesion.
- The more intriguing plot elements tend to vanish in favour of romance.
- Has some fairly hard swings in tone.
Summary
Make no mistake, Angels with Scaly Wings is a romance tale first. Despite the crime story and talk of sci-fi, the game really wants you to date dragons to unlock more intrigue. It's not for me. With the more interesting snippets of information locked behind multiple playthroughs, this leads to something I just don't enjoy. The presentation is decent but the use of multiple artists leads to a lack of visual cohesion. Above all, I dislike how sudden the relationships advance.