Agent Intercept is a spy action vehicular combat game from coding Kiwis PikPok who are best known for their many mobile titles.  Indeed, this game first showed up on iOS back in 2019 as an Apple Arcade exclusive but don’t let that fool you as this isn’t just a lazy mobile port.

If you’re over or around the age of 40, the obvious comparison here is with Spy Hunter, the 1983 coin-op from Midway.  Just as with that game you play as a nameless spy, who drives a car that can turn into a boat when needed.  However, this game takes that to new levels.  But before we get into the gameplay, let’s have a little context.

You are working for ‘The Agency’ in an effort to combat the evil forces of ‘CLAW’ in a plot that could be taken from any number of early morning cartoons from the ’80s but mainly Inspector Gadget.  CLAW, led by the Cruella De Vil-esque Erin, are on a mission to take over the planet and it’s up to you to thwart their plans with help from your Agency colleagues.  To be honest, we found the plot a little bit underwhelming and it really only serves to get in the way of the action, especially as its all delivered by voice actors who won’t be winning roles advertising energy drinks any time soon.  But none of that matters as Agent Intercept is all about the action.

The core mechanics of the game are easy to understand.  Your car moves at a constant speed.  You can’t brake and instead just speed ever forward.  All you can do is ‘boost’ which gives you a slightly disappointing speed boost but does also put you into drifts on corners.  Thankfully the overall pace is nice and fast though.  Beyond that, all you need to worry about is steering across the lanes and, when you pick up a weapon, a bit of shooting.

Along the way will be enemy henchmen in various vehicles.  To take them out you can either boost into them or shoot them with either homing weapons or ones that you have to aim.  It all works very intuitively though, as you’d expect from a game with mobile roots.  But of course, the other main thing is vehicle transformation.  Throughout the game’s 15 stages, you’ll switch from your car form into a boat, a submarine and a plane.  It’s all quite ridiculous and over the top, just the way we like it. 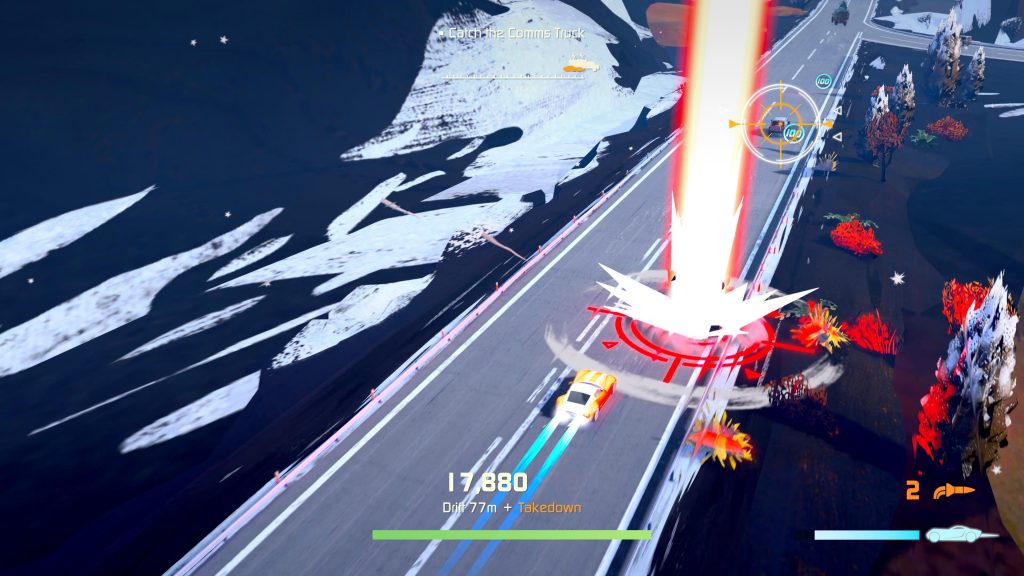 The car mode is certainly the most enjoyable as the drifting mechanics and maneuverability feel the most satisfying there but the other vehicle modes do add some welcome variation  and add to the silliness of the whole thing.  And that’s key to Agent Intercept‘s appeal.  Having just played, and enjoyed, Slipstream recently that was a lot more staid in terms of gameplay (despite the searing visuals) but this game just throws in such ridiculous set-pieces that you just have to marvel at how gloriously silly it all is.

In fact, we don’t really want to spoil too much of it (and on that note, we suggest skipping the game’s opening cutscene as it just seems to want to show you the whole game in advance).  So just know that when you get into this game, it is going to ramp up the action in ways that make the Fast and Furious films seem almost rooted in reality.  Well, maybe not, but this game knows when to throw in a fun moment and you don’t need us spoiling that for you.  So just know that this is a game that’s playable and fun but also one that revels in spectacle. 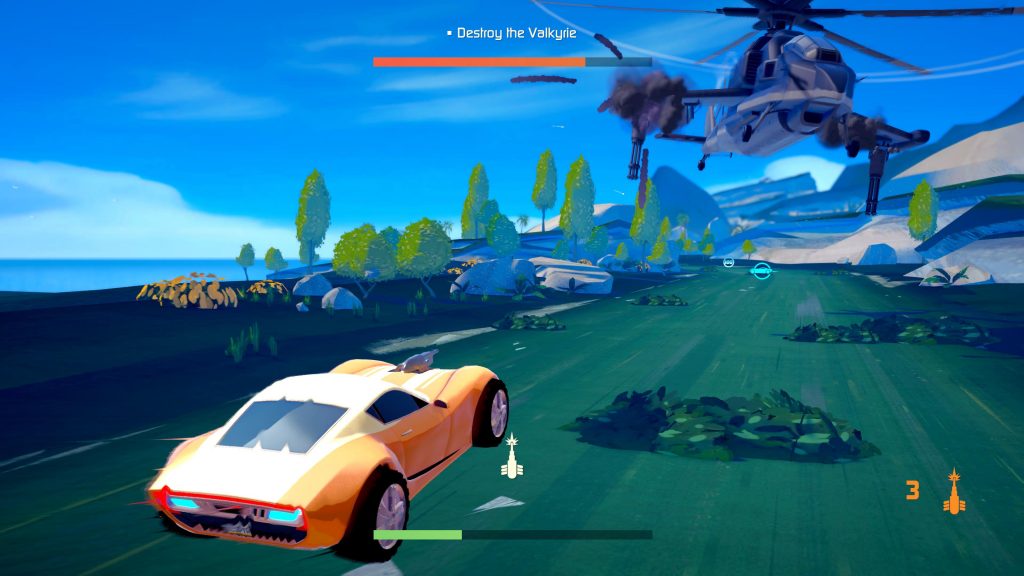 As we said there are just 15 stages and you’ll get through those in one or two solid game sessions.  To be honest, that’s probably enough.  You don’t need too much of this sort sort of thing as it just ends up overstaying its welcome.  If you want more though, each stage has five objectives to beat which does encourage replaying it them and also there are ‘side missions’ and leaderboards that will keep you playing for longer too.

In terms of the presentation, things are much better than you’d expect from a game with mobile origins.  The graphics are colourful and well-defined with lots of big perspective changes and, of course, those huge set-pieces.  So overall we’re pretty happy with the visuals here.  They are a little bit rough around the edges (especially in the supported 120 frames per second mode) but everything moves at such a fast clip that you really don’t have time to start worrying about the lack of anti-aliasing. 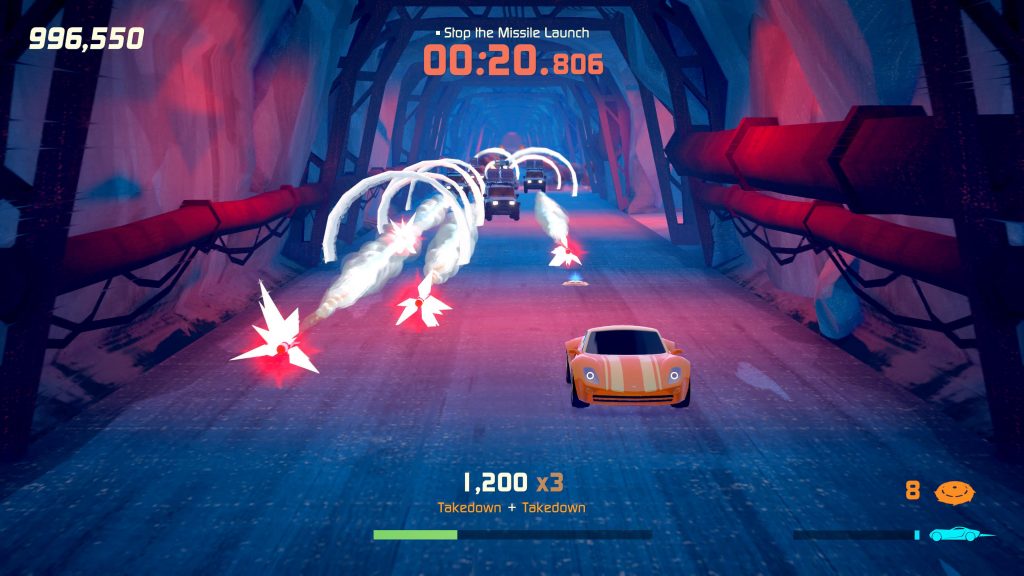 The soundtrack is exactly what you’d expect which Bond-esque guitars competing against synths and it all sounds good.  As we said, the voice acting feels a little phoned in but you can’t have everything.

So overall we’re very pleased with this one.  We’ve said it before that gaming is really just about doing things worth doing and seeing things worth seeing and Agent Intercept does both of those elements in place.  It’s got an arcade-esque quality but with a modern feel and while it’s not exactly the pinnacle of PS5 technical excellence, this is certainly one of the best reenvisionings of a classic game genre that we’ve seen on PSN.

Agent Intercept
8 Overall
Pros
+ A great take on a classic gaming concept
+ Big moments and set-pieces
+ Unrelenting action
+ Slick controls
+ Some welcome variation
Cons
- Quite short
- Graphics are a little rough around the edges
- Story gets in the way of the fun
Summary
We're not surprised to see the classic Spy Hunter concept updated for modern audiences but we are very surprised to see it done as well as this. Agent Intercept is a game created with heart and imagination and a strange fearlessness that has allowed them to create something quite special here.