Gunborg: Dark Matters is a 2D run and gun shooter-platformer from Swedish software specialists Ricpau Studios which is really just Rickard Paulsson, an animator who decided to learn how to make games, and some friends he’s made along the way.  This is his first release and one that has quadrupled its initial estimates of a two year life cycle, so this has become something of a special project for the studio.

The story is pretty inconsequential.  You play as some sort of bounty hunter in space but the story stops being engaging almost immediately.  Thankfully, this doesn’t matter one iota as the main thing here is the gameplay.  So after a quick tutorial that explains the controls you are into the action. 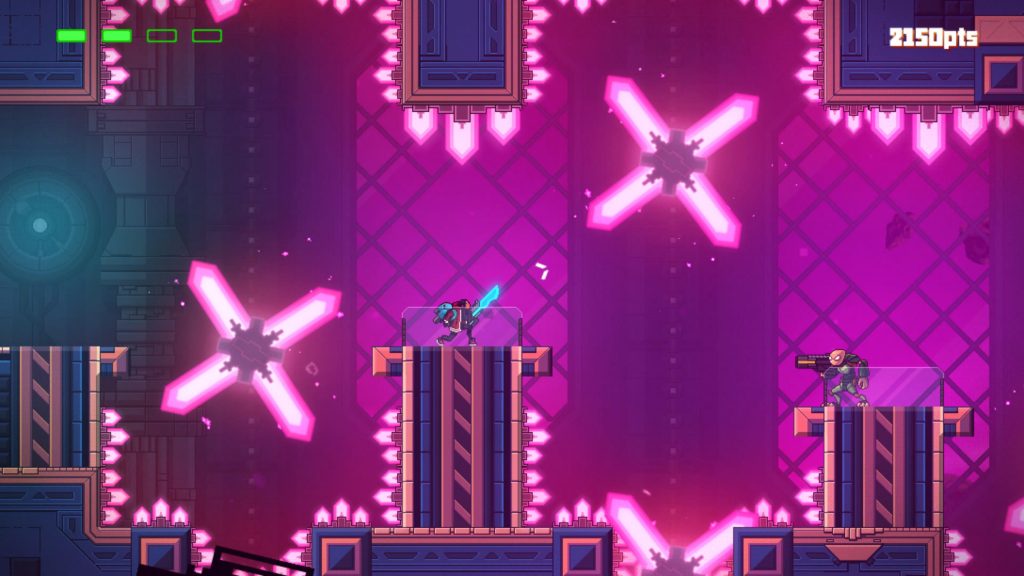 The controls, and indeed gameplay, are reminiscent of Matterfall, best known for being the least good of all the Housemarque games (although still a pretty good game in its own right).  This is a twin-stick effort with movement mapped to the left stick and aiming on the right.  You jump with L2, attack with R2, pick up and drop weapons with L1 and activate your shield with R1.  This leaves your thumbs free to do all the twin-stick stuff but it does take some getting used to, after all we’ve been jumping with the X button ever since joypads were a thing.

You will get used to it though and then you’re on your way.  Initially, you just have a sword and so you’ll need to get close to your enemies to dispatch them but they’ll soon start dropping weapons, allowing you to switch to long range combat.  Ammo is limited though and so you’ll need to be mindful of your efficiency.  New weapons drop along the way too, with there usually being some sort of compromise between stopping power, bullet speed and ammo capacity. 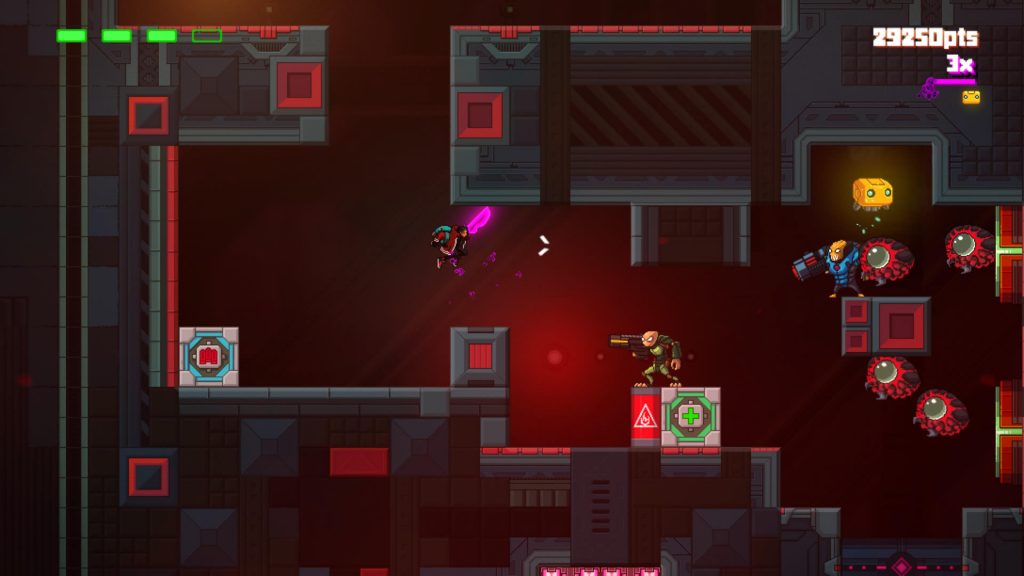 Your enemies will vary from sword-wielding robots, turrets that’ll blast you from a distance and all manner of other creatures that’ll either try to shoot or hit you.  Thankfully you’re quite nimble with not just a jump and double-jump but actually a short-use jetpack that allows you to chain together four jumps as well as having the ability to wall jump.

You’ll need every bit of that maneuverability though as a lot of the danger comes from the levels themselves with all the security systems, laser beams and spiked traps that you’d expect from this kind of game.  What we really liked though was that the levels themselves are very short, contained affairs.  You’re never left wondering where you are meant to go as typically each sub-stage only has the equivalent of half a dozen rooms (it scrolls, so it’s not broken down into separate screens).  This is great as it means you can just concentrate on survival and progress.

Indeed this isn’t a very long game.  Gunborg‘s ten or so levels (each then grouped into several sub-levels) will only last you and a couple of play sessions on Easy with the only real sticking points being the occasional tough boss encounter (the final boss being a bit of a pig) and some tough level layouts.  Usually enemies aren’t the problem.  For us the difficulty really peaked in the last two levels with their over the top use of spike traps.  The game is pretty generous with its checkpointing though, which does allow you to make good progress.  That said, we didn’t have much success on the two higher difficulties. 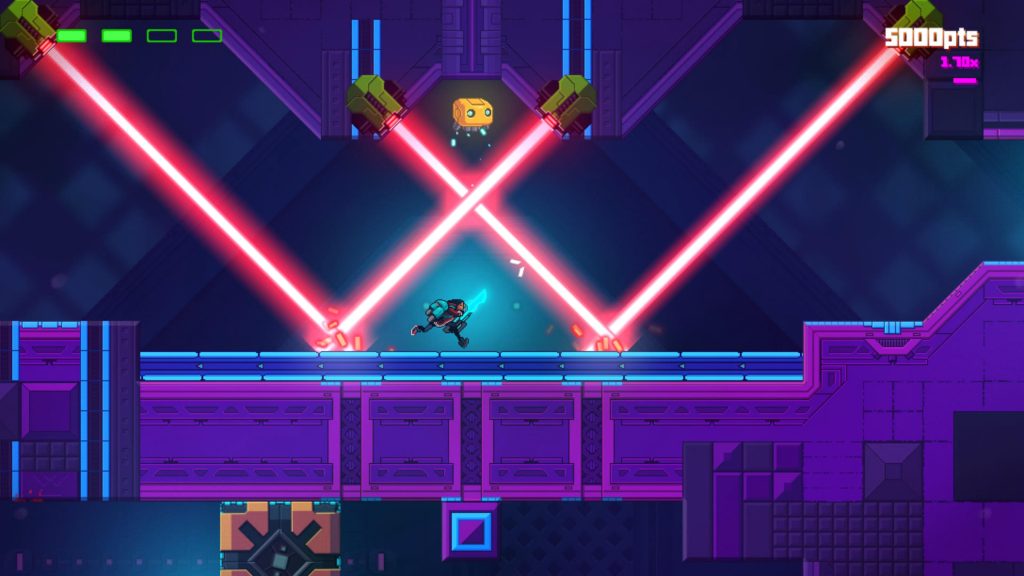 We’re still not too sure about the difficulty curve here.  It might be just a little too steep and that could put off more casual players but it’s not some sort of Souls-esque nightmare either and you do make good progress early on.  Everything is certainly very playable and well-considered, which is remarkable considering this is the developer’s first effort.  He’s done well to balance the mechanics out here with the game stopping short of throwing in too many mechanics (unlike Matterfall which kind of went a bit mad with it all).  The combat is good (with your reflective shield being a very useful mechanic too) and the platforming is decent.  We’re not too sure about the levels where you have to use moving blocks to avoid lasers, that can all seem a bit fiddly but the controls do hold up during these sections.

Add to that the clean but detailed visual style (which, mercifully, isn’t done in 16-bit pixel art), powerful synthy soundtrack and even a little bit of DualSense haptic use and you’ve got yourself a very well-presented game here.  As we said, the plot lost us thanks to its use of text dialogue and cartoon cutscenes but everything else looked good and played well.  And so we can’t help but be impressed with this game.  Not just as a debut effort but really on its own merits.  It could well end up lost in a sea of 2D run and gunners just because there are so many on PSN but it deserves some recognition as it is certainly one of the best ones available.

Gunborg: Dark Matters
7 Overall
Pros
+ Easy to get into
+ No sprawling levels
+ Well-presented
+ Good combat mechanics
Cons
- Some tricky difficulty spikes
- Might be a bit too short for some
- Story is instantly ignorable
Summary
Gunborg: Dark Matters takes all the stuff we like from a good metroidvania game (shooting and platforming) and takes out all the unnecessary sprawl which makes this game a tight, focused affair with good mechanics and generous checkpointing. It's a little let down by some rogue difficulty spikes but other than that, this is an impressive debut effort from an indie studio we'll be watching with interest.