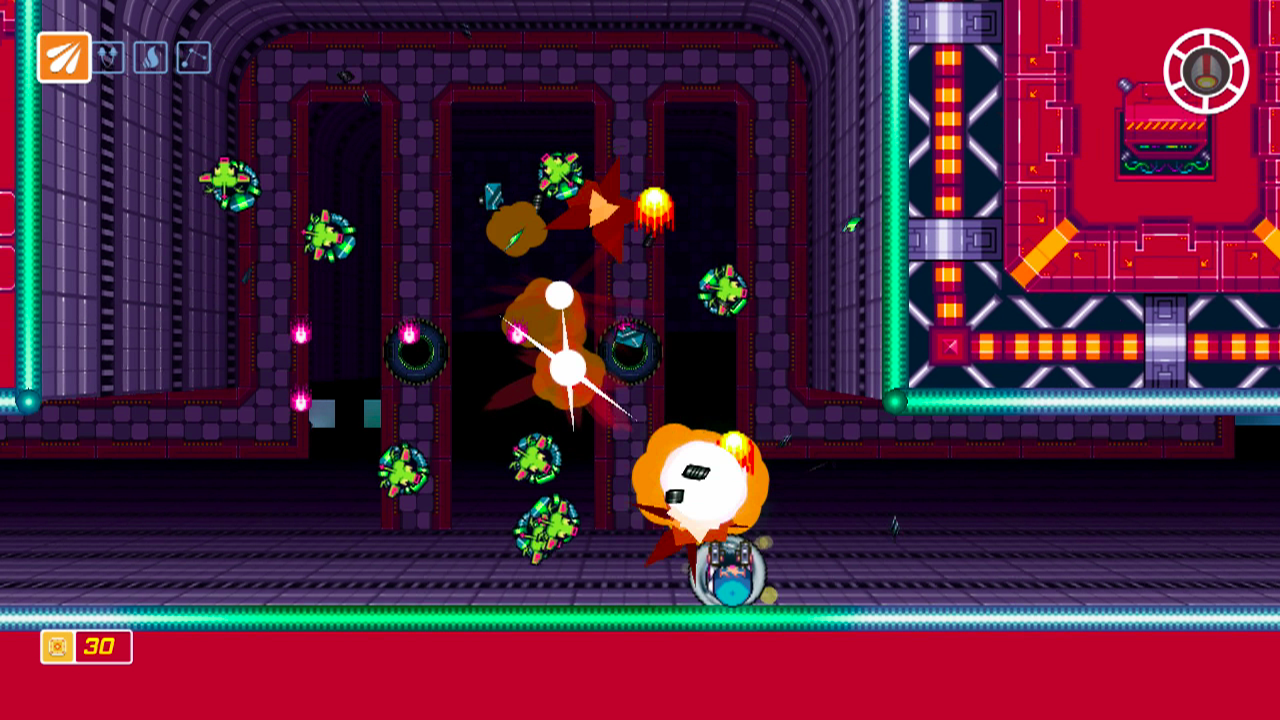 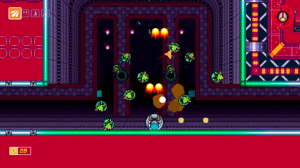 Scram Kitty DX is an updated version of the WiiU only title Scram Kitty and his Buddy on Rails from Welsh developer Dakko Dakko. It reviewed very well at the time though I’ve not heard anyone talk about it since, so here’s hoping releasing it with a few extra bells and whistles on Playstation 4 and Playstation Vita will get it a little more exposure.

Scram Kitty DX puts you in control of a little vehicle which is viewed from a top down perspective and can only move around the edge of the environment and objects. You can move left and right and jump off the surface. You can also double jump, not in a jump once to jump and then again to gain more height style, but if you jump again whilst in mid air upon contact with the ground you’ll bounce off whilst on fire allowing you to jump further than normal and damage enemies. You can also shoot but only perpendicular to the surface you’re on.

I have just told you more than Scram Kitty DX told me. You start the game and you get four options: Adventure mode, Challenge mode, Options and Cross-Save (allowing you to move between PS4 and PSV as this is a cross-buy title). In the options there is BGM Volume, SFX Volume and Confirm, there are no controls or anything. Straight from the off Scram Kitty DX has an old school feel. Why should they tell me anything? Who needs a story? Start the game, push some buttons and see what happens.

I almost feel like I’ve said too much already, the developers have obviously made a conscious decision not to give you any info and to just feel it out yourself, but then it wouldn’t be much of a review if I didn’t give you some idea of what you were getting into.

The basic objective is to jump and shoot your way to the end of each, quite open, level which will see you saving one cat. Most levels have four cats to save, each with a different method of unlocking them (though it’s the same on each level) and the amount of cats you’ve saved total gates your progress through the game. If you try to rush through doing the minimum amount possible you’ll be blocked off quickly and have to go back to do better. 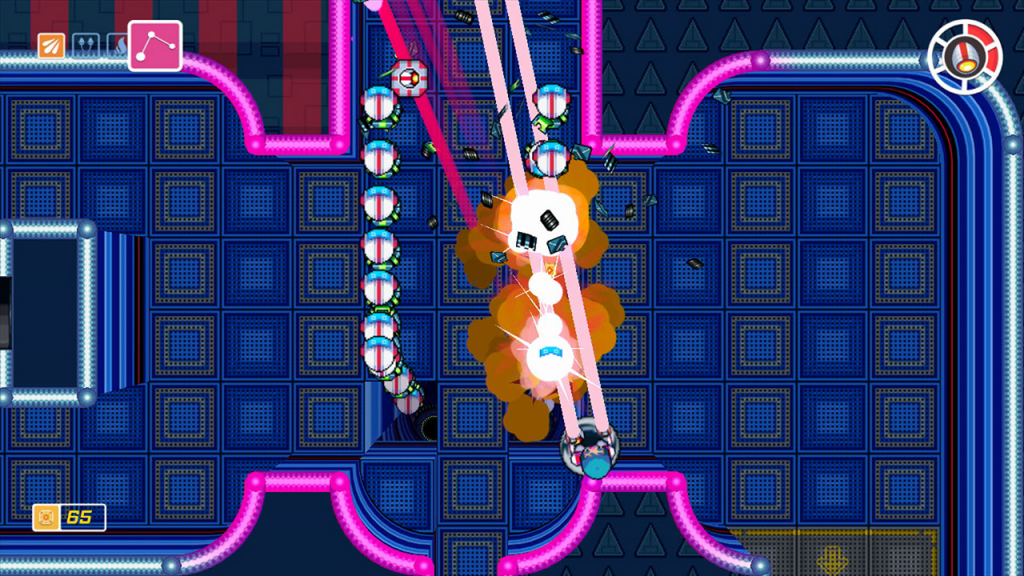 There aren’t a huge amount of levels but the difficulty does increase quite rapidly so you shouldn’t expect to just fly through it. The primary difficulty comes from the movement controls. They aren’t bad but even after playing through the entire game the jumping controls feel a little unpredictable to me (especially around corners) but thankfully (apart from for one of the cat types) you can take your time as there is no time limit. If there was I feel like that would have been an element of difficulty too far.

There are four weapon types, each with their own unique uses and characteristics (again, you’re going to have to find these out yourself) though I did find the shooting came secondary to the ‘platforming’. In many ways I was reminded of games made by Treasure, from Gunstar Heroes with the weapons to Ikaruga with the general feel of having to learn and master a level before doing well on it. The learning of a level would have come easier had the game had a zoom out button or a general overview of a level but instead you have to build a mental map to learn your way through the winding levels.

Once you have got a handle on some of the levels the Challenge mode lets you play a level whilst collecting all the cats (more than the default four) as quickly as possible. Your times can be compared to people on your friends list but not the world it seems, which is a shame if you really want to test yourself but it’s a nice addition for when you’ve exhausted the Adventure mode.

There are no real massive negatives with Scram Kitty DX. Yes the controls are challenging but I can see people mastering them and doing insane things if it catches on. Sure, it’s difficult but that in itself is not a negative thing, it’s a design choice. The lack of map is also by design. My only real gripe is that there is a definite feeling that what I was doing in the final levels was not really any different to what I was doing in the early levels. Yes there were new weapons, enemies and environmental hazards but the methods I used to clear out a level didn’t change. You can say this about numerous games but here the feeling was one I couldn’t shake. The problem is alleviated a little if you try to go for the trophies which have you attempting specific challenges for certain levels however. 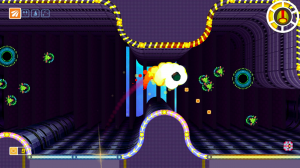 Ultimately, Scram Kitty DX is an indie game and for £8 it achieves everything it tries to do and does it successfully. Whether what it tries to do works for you however depends on your tastes and how appealing you find the idea of old school gameplay and difficulty. If you’re intrigued it’s definitely worth a shot as a well made game with interesting mechanics and above average difficulty.

Scram Kitty DX
7 Overall
Pros
+ Everything it sets out to do it does well + Respectable challenge + Trophies add a little variety
Cons
- Jumping controls take some getting used to - Could do with a full map view - Gameplay never evolves
Summary
Scram Kitty DX is an indie game and for £8 it achieves everything it tries to do and does it successfully. Whether what it tries to do works for you however depends on your tastes and how appealing you find the idea of old school gameplay and difficulty.