Every so often you’ll happen upon a TV series that you find intriguing. Occasionally you’ll plough a few hours into it at the outset, but then for whatever reason you abandon it altogether. For us, the mid-season break in series two of The Walking Dead did for us. We never went back. Or more recently, Upload on Prime. Two episodes and we started to feel some sort of connection with the characters, but simply didn’t care enough to carry on.

9 Monkeys of Shaolin from Russian indie Sobaka Studio, published by Ravenscourt, is that in game form. It’s alright. Just alright mind. You can dip in and dip out just fine, but we didn’t feel compelled to play it beyond a level or two in one sitting. The gameplay is just fine, just as the Shaolin monk revenge quest is something straight out of a Shaw Brothers kung fu film. 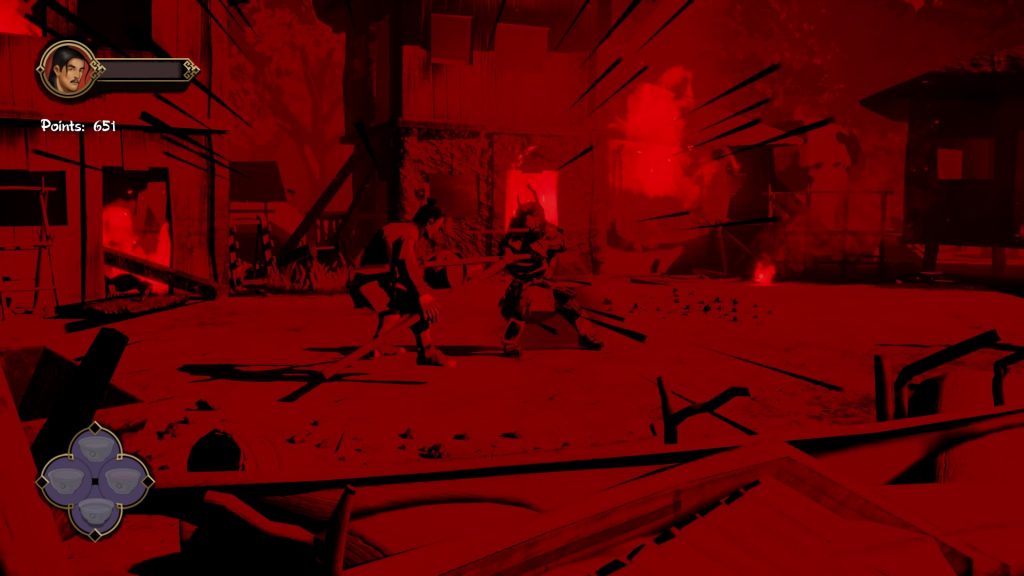 It feels more like a TV series rather than a main feature though. Mainlining this never seems like the correct way to play it. And that’s just fine. The levels are beautifully designed if a little linear. Similarly, combat is quite fun with extra techniques and moves added to your oeuvre as you progress through the game. You’re taught these via story progression rather than as an outright tutorial.

The sense of place is, if anything, a little too sterile. The levels you’ll traverse on your journey are almost too beautiful. There’s barely a rough edge to be witnessed and it almost seems a shame to sully them with the viscera of your enemies. 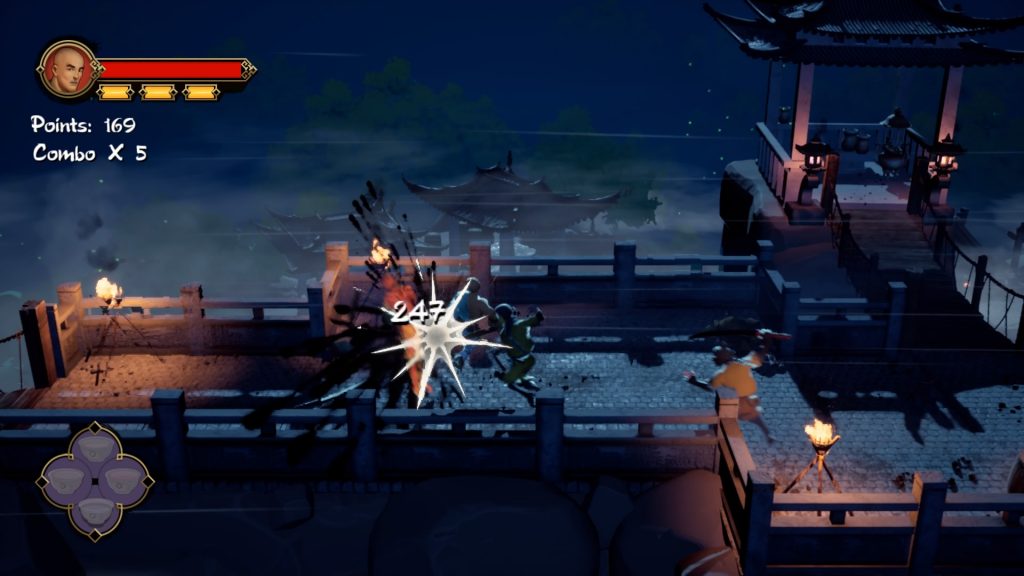 Not that 9 Monkeys is particularly bloody or anything, no ultraviolent Zatoichi blood spurts here. Nor the black humour from Kurosawa films.  Admittedly the setting is rural China and you’re a vengeful fisherman at the outset, but the parallels remain. It all feeels a little bit generic unfortunately with no distinct character of its own. The violence is frequent and you’ll face many enemies as you go. Though we chose to play on the easiest difficulty level, some extended battles you’ll do well to come away unscathed.

As you go through the levels you’ll have the opportunity to pick up consumable items in the form of teas. Green tea replenishes your health, red tea gives you increased attack power and yellow tea gives you unlimited special moves for a short period. There’s a fourth variety available we presume, but we confess we’ve not got to the latter stages of the game where, we presume, it is available to use. 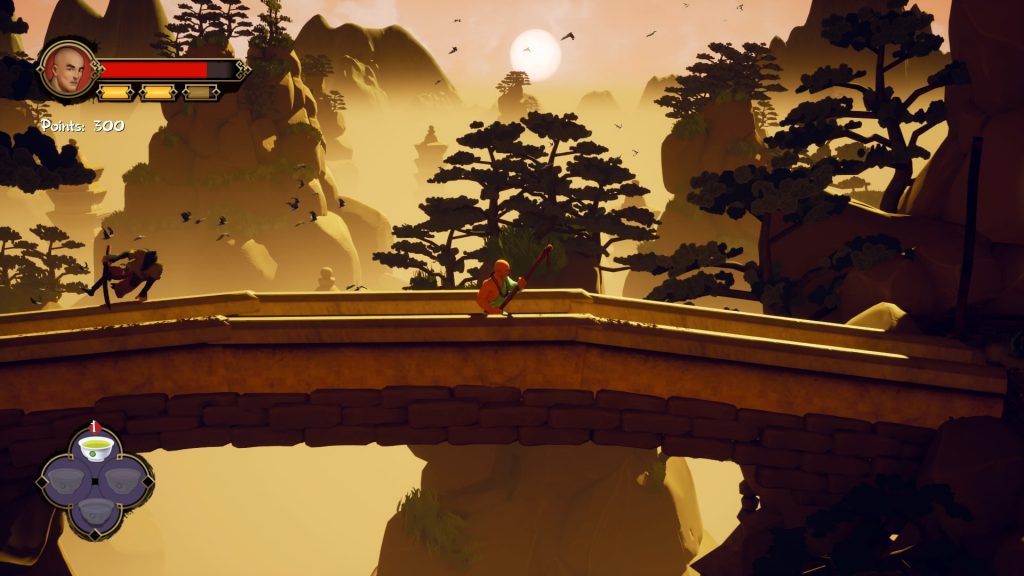 For a game where movement is key, there’s no jump as such. You can roll with

but it’s frustratingly implemented and you’re just as likely to fall into a precipice rather than nail a traversal. Attacks are mapped to

(thrust). You can modify these with

for specials, though in both cases they are reliant on your Qi meter having a segment available to use. This stops you liberally spamming the special move button, so understandable.

You can parry attacks with

, this being effective against all but the strongest of foes. You’ll get a little tell when an enemy is about to attack. Time your button press correctly and you’ll stun your attacker giving yourself the opportunity to stun them.  Additionally, ranged enemies can have their projectiles deflected back towards them for an easy kill. Though we didn’t managed to successfully parry the incendiary flaming pot thrown our way in one level. We found cheesing it and running away to be far more effective. 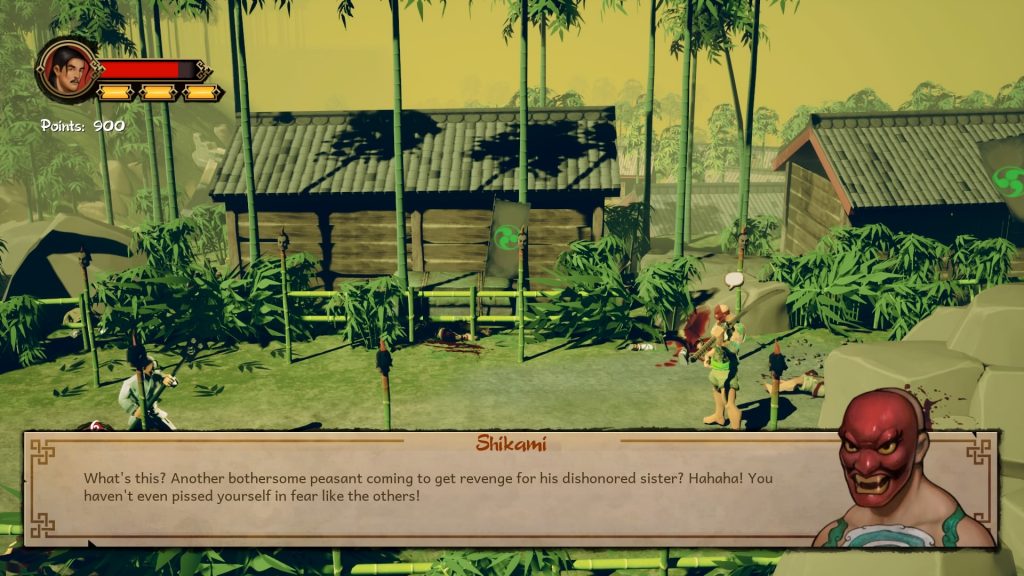 Every few levels you’ll face a miniboss of sorts. Upon beating them you’ll unlock a new weapon or armour item with handy modifiers, such as replenish health when you gain qi or have a higher chance to stun enemies. These bosses are often accompanied by a retinue of enemies, though if you’re fast enough and you can unload on the boss and once you’ve dropped them, the fight concludes without your needing to mop up the adds.

After finishing levels you’ll also unlock upgrade points to modify your abilities in the out of mission hub area. Here you can also replay levels and access lobbies for multiplayer co-op modes. It’s all quite tidily done, with subtle autosaves making sure you don’t lose any progress. Not that the levels are overlong, it’s just nice when things work. All dialogue is fully voiced, but it’s played very straight with no real panache. No cod overdubs as in the likes of countless Wu Tang Clan samples unfortunately. It feels a little like a missed opportunity in that regard.

In conclusion then, 9 Monkeys of Shaolin is a perfectly serviceable scrolling fighter. Nothing too flashy, just like a Kia. It does the job, but neither does it set the pulse racing. But that’s just fine.

9 Monkeys of Shaolin
7 Overall
Pros
+ Combat is satisfying
+ Often quite pretty
+ Well suited to short sessions
+ Upgrades and unlockable weapons are well done
Cons
- A little generic
- Not hugely exciting
- Voice acting lacks spark
- Can almost feel sterile at times
Summary
9 Monkeys of Shaolin plays well, but plays it that bit too safe. Its almost generic, lacking any real character of its own. It's alright though, better suited to short play sessions rather than hours of extended gameplay.