From Batterystaple Games and Fire Hose Games comes 20XX, a rogue-lite love letter to Mega Man X. If you’ve always wanted Mega Man X‘s difficulty to be turned up a notch but with the ability to make things easier by playing it over and over again then you’ve found your game. 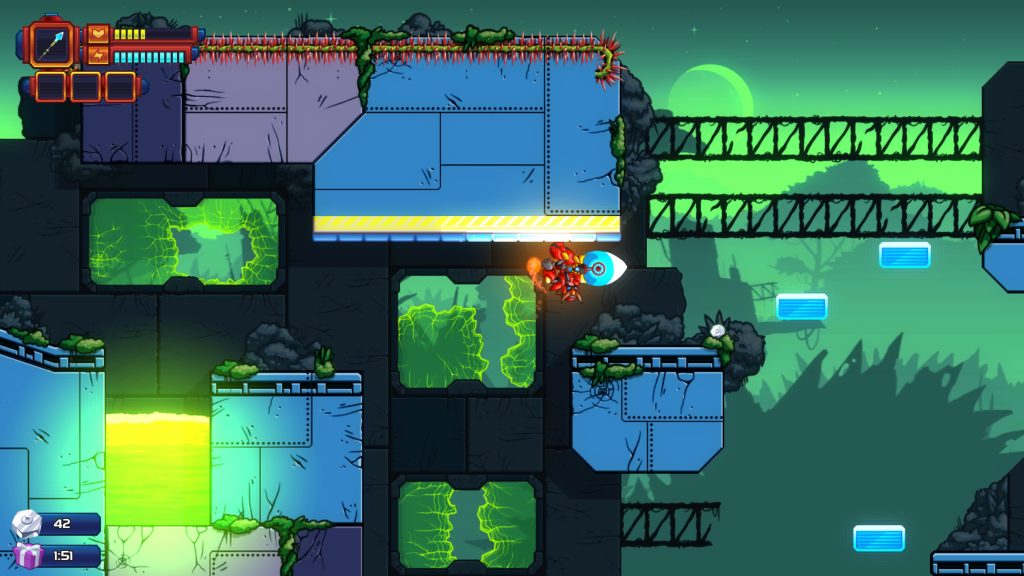 The Mega Man comparisons begin immediately as a cutscene starts with Nina standing on top of a building a la Mega Man 2. The world is in turmoil after a robotic uprising and so it is up to Nina and Ace to destroy those naughty robots and whoever is behind it. It’s an action-platformer rogue-lite though so there’s not too much story to worry about.

You can play as Nina who has an arm cannon (like X from the Mega Man series) or Ace who by default has an energy sword (like Zero). They both play the same otherwise, with the ability to jump, wall jump, dash and charge attacks by holding the button down being available from the off. You’re put into a randomly generated level which will test these abilities. There are moving platforms, enemies and hazards to navigate, made up of pre-designed chunks that are sewn together. You have a health bar which can be replenished with pick ups and an energy bar for specials. Pick ups can sometimes drop from enemies or can be found in boxes and loot crates throughout the levels. 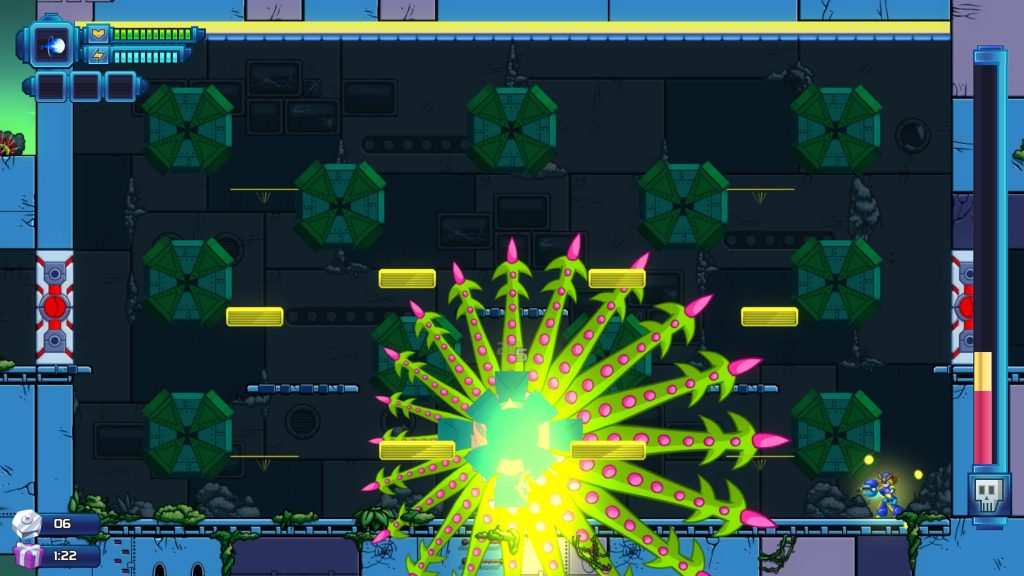 At the end of the first level is a random boss from a choice of eight. You will walk through the boss doors much like in Mega Man and then will have to learn the boss’ attack patterns and behaviour to defeat them with as little damage as possible. Upon defeating the boss you’ll get a chest to open which has a guaranteed Aug in it to buff your character and can then choose which boss you want to take on next out of three possible choices, allowing you to choose your path through the game to a point. Later levels add more hazards and the bosses gain more dangerous attacks.

Also like in Mega Man you can get the boss’ weapon, but only if you choose to. You can only have three specials (on

) so you should be choosey and if you decide not to take the weapon you can take some bolts (which can be spent at certain points within the levels) or an Aug instead. It’s up to you to choose what will benefit you most. Complete the level under a set time and you’ll get an extra chest at this point as a reward as well. 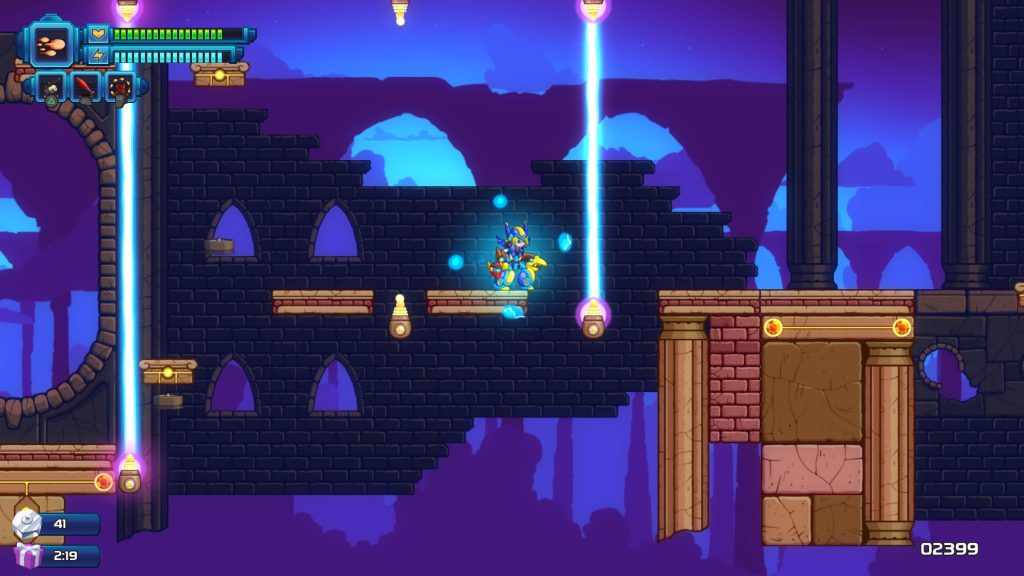 You’ll need to work through all eight bosses and then there are two more levels after that. As with the best rogue-lites/likes you will begin making progress through your failings. Yes the random Augs you pick up along the way will help you out but it’ll be your knowledge and execution of the basics that will decide how far you get. What makes 20XX a rogue-lite is that as you progress you’ll unlock Soul Chips which, once dead, you can use before your next run to purchase unlockables.

You can go for passive boosts which will start you with more health or energy or gift you chests at the beginning of the first level to give you a leg up or you can unlock pick ups that you may or may not pick up on subsequent runs, or you can purchase some Augs to give you a head start on your next run. If you want you can turn off the passive buffs once you’ve unlocked them to make the game harder again.

If that’s not enough you’ve also got multiple difficulties. Reverent is the easiest and gives you three lives but blocks trophies, then there’s Normal and then there’s Defiant which is harder and allows you to make it harder still by activating Skulls which are special conditions like levels lasting longer, no health drops or fatal traps (by default spikes and pits only hurt you and aren’t instant death, thankfully), much like Skulls in a Halo title. 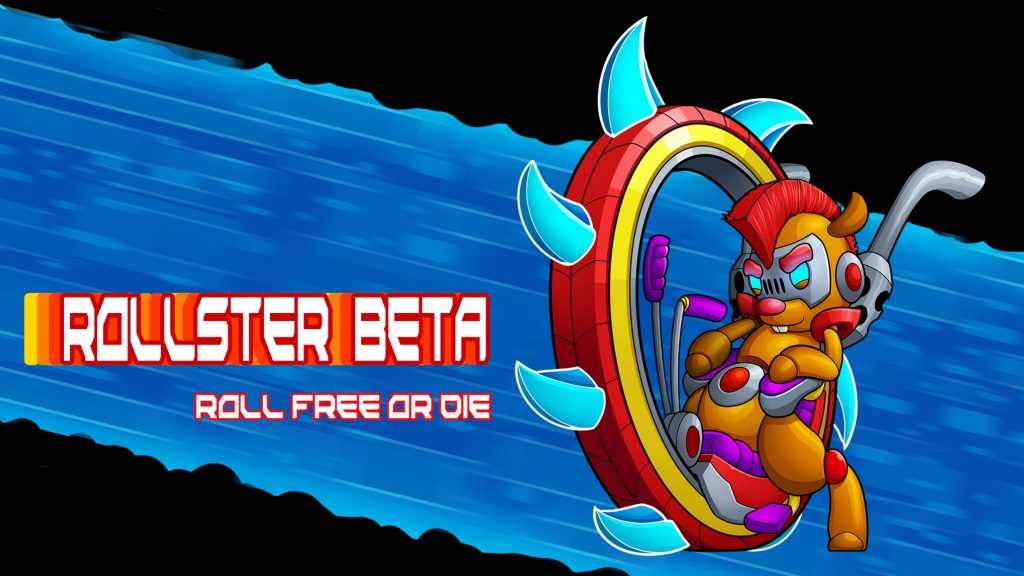 Beyond that still you have a Daily Challenge which is a set seed that you have one attempt at with online leaderboards showing the best players. Daily Hardcore Challenge is the same but with three random Skulls activated. Then there are Weekly and Weekly Hardcore variants, Rush Job which is a boss rush and Seed Racer which lets you set the seed which decides the level layouts. There’s a third unlockable character plus you can play all the modes in online or offline co-op. I struggled to join a random game but if you have a friend of similar tastes then this is an excellent feature.

So I like Mega Man and there seems to be a lot of content here so why aren’t I giving it a perfect score? Well although the visuals are solid and colourful I wouldn’t call them attractive and things can get a little messy when there’s a lot on screen, with explosions covering a lot of important information, if only briefly. The levels and enemies aren’t as interesting as those that influence them and there’s less variety. Randomly generated levels repeat too often and they’re never going to match a hand crafted level for quality.

Certain levels have vertical sections and it’s very easy to be caught unawares by something you can’t see here due to there being less screen space than when moving horizontally. I also had it crash once when I beat level eight for only the second time. There is a save and quit option if you want to leave and come back to a run but it doesn’t seem to automatically save your progress for occasions like these, so I had to start all over again. It did save at least some of my Soul Chips however. 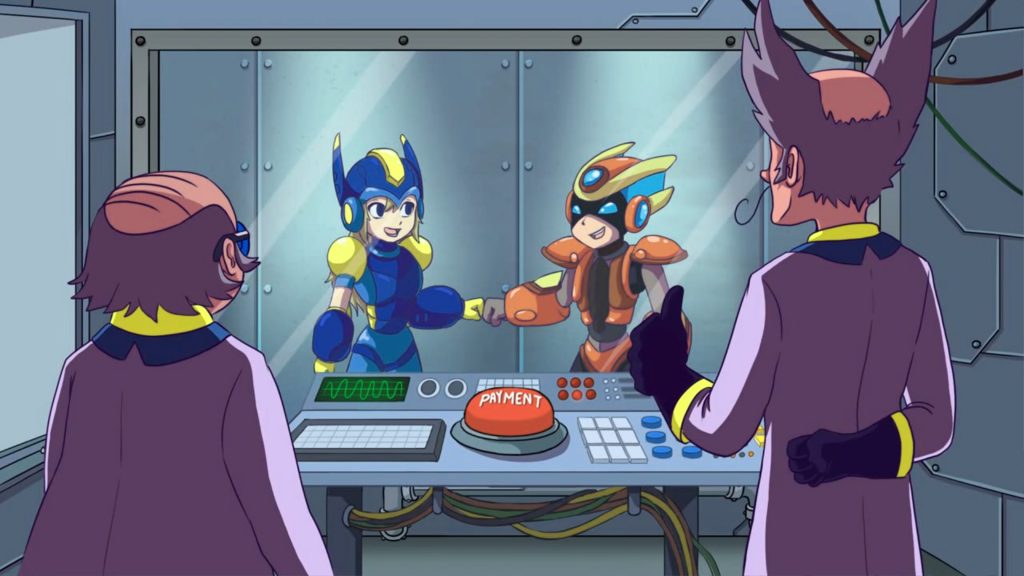 20XX takes a lot from Mega Man X but it does a decent job of tuning that gameplay to the rogue-lite formula. It falls into some of the pitfalls of the genre with repeating sections too often and repetition in general but it counters this to a point by offering lots of different ways to play it with different modes, difficulties, characters and co-op. I can’t unequivocally recommend it to fans of Mega Man or rogue-lites as they’re not two things that normally meet, but if it does intrigue you then it does enough to warrant a look.

20XX
7 Overall
Pros
+ Brings the gameplay of Mega Man X to rogue-lites
+ A lot of different modes and difficulties to try
+ Co-op
Cons
- Screen can get messy
- Randomly generated levels lack personality
- Some level design feels unfair
Summary
20XX offers a rogue-lite twist on Mega Man X gameplay. It suffers from the randomly generated levels and doesn't quite hit the heights of its inspiration but there is plenty of content and challenge to sink your teeth into, either solo or with a friend.