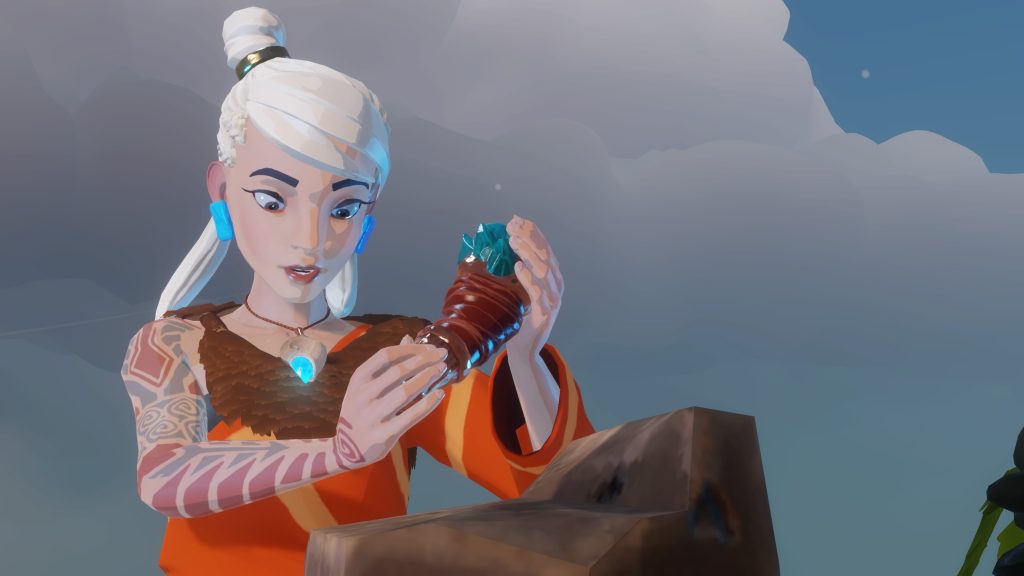 When I first watched the trailer for Windbound, I thought the same as many would have done when seeing a cartoonish cel-shaded title that bore a more than striking resemblance to that of the later Zelda games. It was only after diving into the game that I found that this was mostly skin deep, that 5 Lives Studios’ Windbound had more to offer than influence, that the game was altogether different and brutal beast in itself.

You play as Kara, a lone nomadic warrior that has found herself separated from her seafaring clan as she encounters a giant creature that knocks her from her raft and leaves her marooned on a deserted island. It is your job as the player to survive and sail across archipelagos that stretch as far as the eye can see (and beyond). You begin with little to your name other than miniscule carrying space, an unbreakable knife and shortly after starting, an ore which forms the basis of your seafaring adventures.

The gameplay will be mostly familiar to those who have played the Zelda franchise. You can lock on to enemies with the pull of a left trigger, strafe around them, attack and leap away with correct management of your stamina bar being the key to success. As this is survival game, you also have crafting mechanics which see you needing to harvest materials and creature parts to succeed in cooking, building and creating weaponry to make your life easier. In addition to this, you also have a boat that you can both build and use to sail across islands, all in a bid to find your way back home. 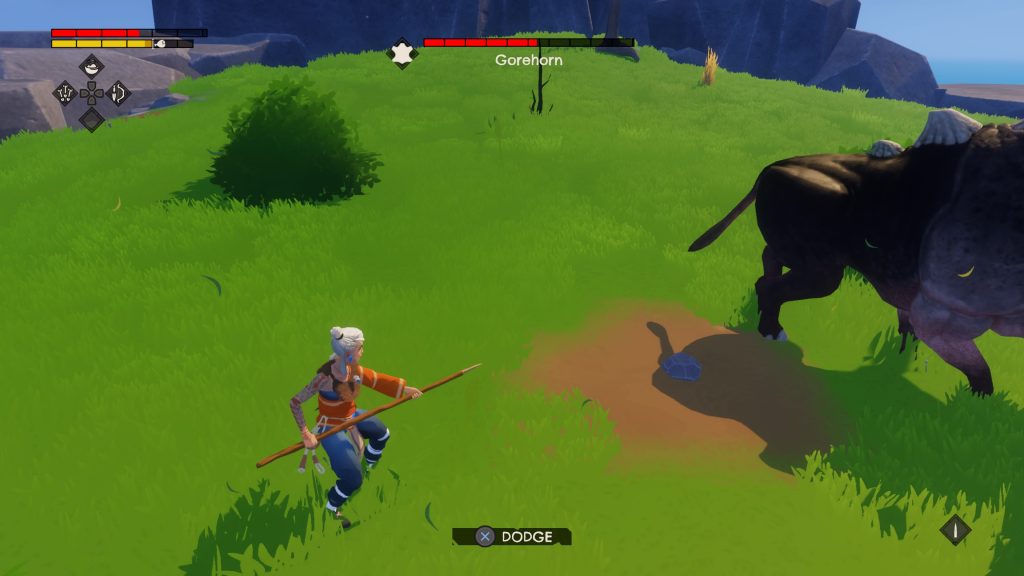 The world of Windbound is immediately inviting, with sun-drenched islands playing host to all manner of charming creatures that act as adorable food sources, crafting material pinatas or macabre beasts that with a bit of finesse, can be turned into highly beneficial tools or weapons for your journey. Soon into the story though, Windbound shows its fangs, demonstrating that this is not a game to be taken lightly, as the reality of hardcore mode rogue-like roots come into play.

As per the default difficulty mode, Windbound is one of those games that will take you right back to chapter one if you so happen to bite the dust at any given moment in the story. Like me, you could spend eight hours crafting and cruising through the campaign, only to be taken out by a beetle and end up losing everything, less your unlocked blueprints and immediate gear to hand.

It’s an utterly gut-wrenching moment that I am sure will be a make or break experience for most. It felt needlessly unfair at first, almost causing me to switch to the more friendly storyteller mode which would have sent me to the start of the chapter I was on. Instead, with a sense of perseverance and an arsenal of blueprints ready to go; It didn’t take me long to get back to the water and on track again. 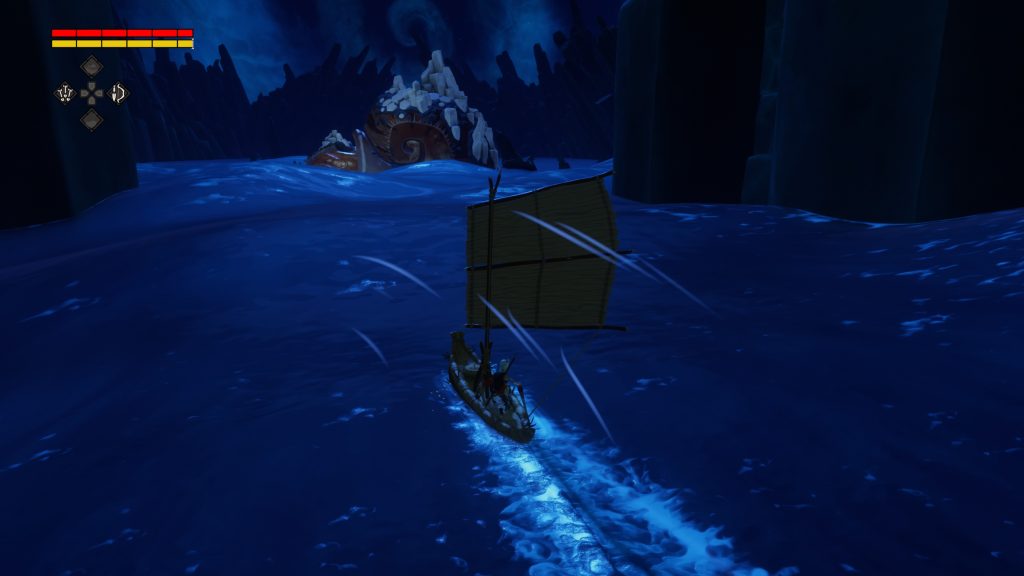 Based on the experience with death, I found myself respecting what the game had to offer, taking my time with each island experience and properly scoping out each next new step before making more educated moves. There are many ways in which you can meet an end in Windbound. The things that got me most were the nagging hunger meter which constantly needs to be topped up before Kara succumbs to starvation. Miscalculating my odds with the wildlife was another and accidents with high cliffs, with not so soft landings come to mind. So, taking my time and getting Kara to run away from danger when fights got too tough changed my previous two hour runs into a much longer and successful turn which saw me at the final chapter.

On reaching this point, Windbound became a lot easier. Before, I would rush to each of the monolithic structures that could get me to the next chapter dotted around the islands just so I could move on. By slowing down and taking in each landmass, I was instead rewarded with rarer items and gems which allowed me to buff my ship and character, making the next few dangers much easier to deal with, allowing me to unlock more crafting options for the next run and being better prepared from the off.

This carried over crafting knowledge system is really where the game shines and this is no more apparent than when you look at the boat gameplay. In the first few playthroughs it can feel that this is a neglected aspect of the game, not really moving forward or allowing for customisation. It’s not until you get further in and take the time to create tools that you gain access to the more in-depth boat creation tools, especially if you are slower on the uptake on these mechanics as I was. 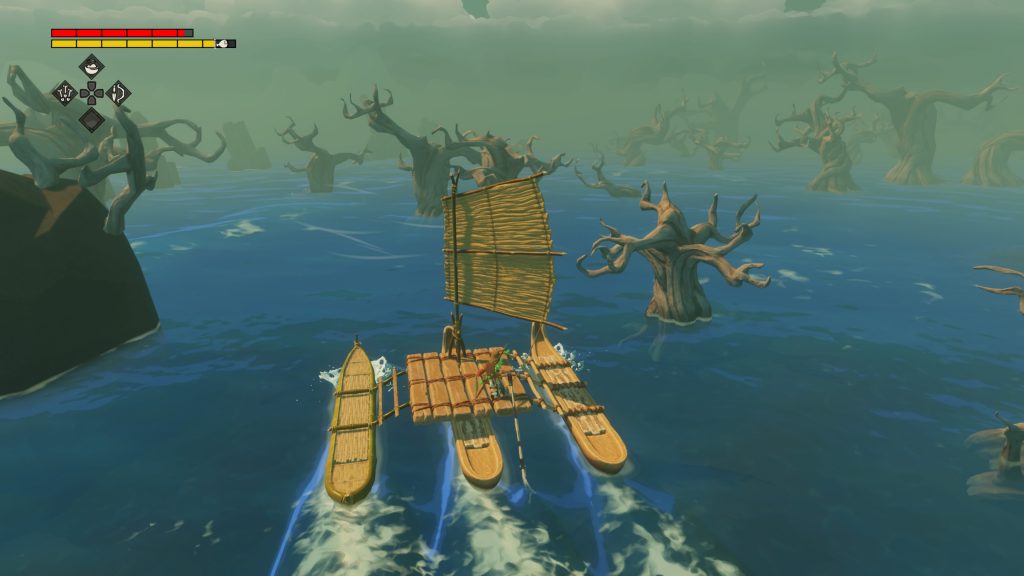 Once I did break through and start experimenting with boat construction, I was impressed with just how outlandish your vessel can become. What once was a feeble but fast grass canoe slowly became a behemothic structure of wooden planks with bone figureheads and steel spikes for smashing through seaborn creatures without the fear of the boat being destroyed mid-travel. Being able to install permanent cooking devices, additional storage and leather drying racks took a lot of the frustrating elements from the island and instead made the dinghy into a fortress that catered to my every need. It’s a lot of fun to tinker with and by far my favourite mechanic in the game as there is a fair amount of depth to it.

For example, it’s not always the most beneficial thing to go for the biggest, baddest boat on the ocean. Sometimes it’s more tactically sound to have a smaller, more manoeuvrable boat to navigate around coral reefs or to remove the sails to ignore the wind and carve accurately between jagged rocks. Of course, these smaller rafts don’t really give you much protection against the giant, menacing teeth of a horntooth shark which I had the displeasure of meeting on a couple of rare occasions. 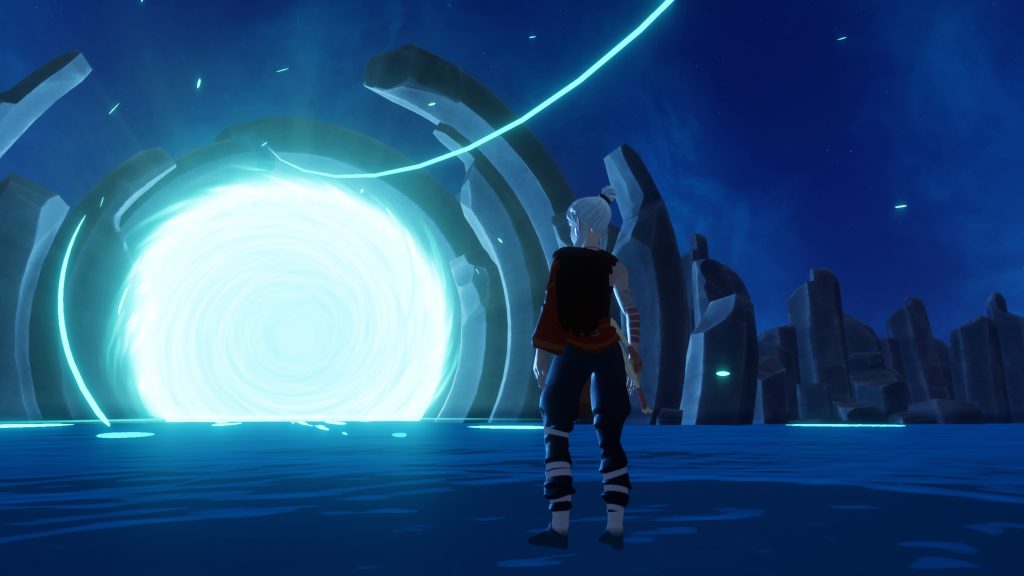 Couple this seafaring gameplay with the simplistic piano laden soundtrack and you have one of the most blissful titles out there. Combine the danger of venturing onto a creature filled island with a lack of food in belly and you have one of the most stressful. Combine all of these elements and you have a game that provides a genuine survival challenge that will test, annoy and delight in equal measure. To me, that is the kind of survival game I would want, as at no point do you feel entirely safe, but when you do conquer the adversity it feels brilliant, rewarding and worth the time spent.

Windbound
8 Overall
Pros
+ Vibrant art style, with plenty of charm in both locales and enemies
+ Exploring islands feels suitably threatening and rewarding
+ The sense of risk/reward is very strong
Cons
- The hunger meter can be overly bothersome
- Carry capacity turns certain moments into a bit of a chore
- It can take a while for some of the more interesting mechanics to show up
Summary
Windbound presents itself as a serene experience, full of gorgeous locales and charming visuals. Underneath this nomadic glamour, hides a core of rogue-like brutality and the ever-present threat of death, with an inevitable restart to the beginning coming to those who brazenly disregard the dangers. This difficulty will divide many, but with perseverance, the game turns into an experience worth taming, with rewarding exploration, fun seafaring gameplay and a constant sense of rewarding progression.