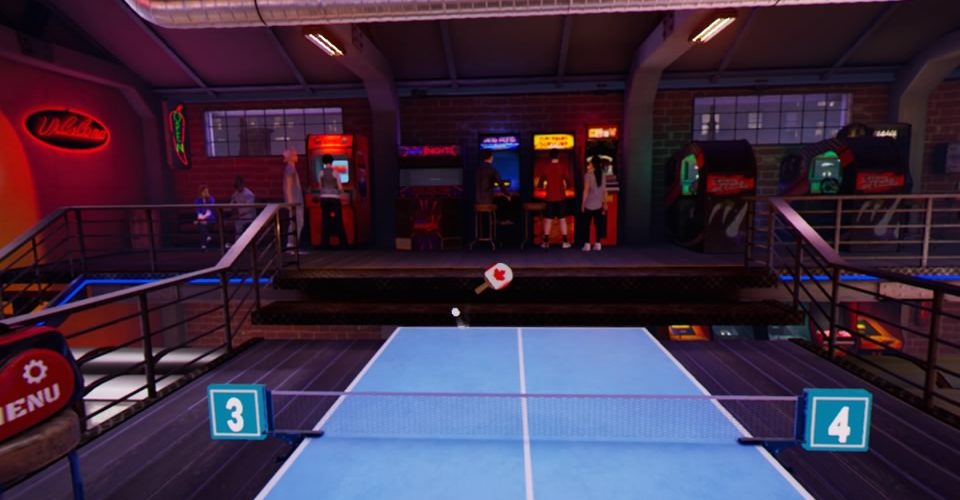 In the early days of PSVR we reviewed VR Ping Pong. Although I didn’t personally review it I did play it and it was an enjoyable enough approximation of table tennis which lacked content, variety in visuals and the AI was too hard for its own good. Here we have VR Ping Pong Pro, a follow up to that game which looks to fix those issues whilst retaining the decent representation of the sport. 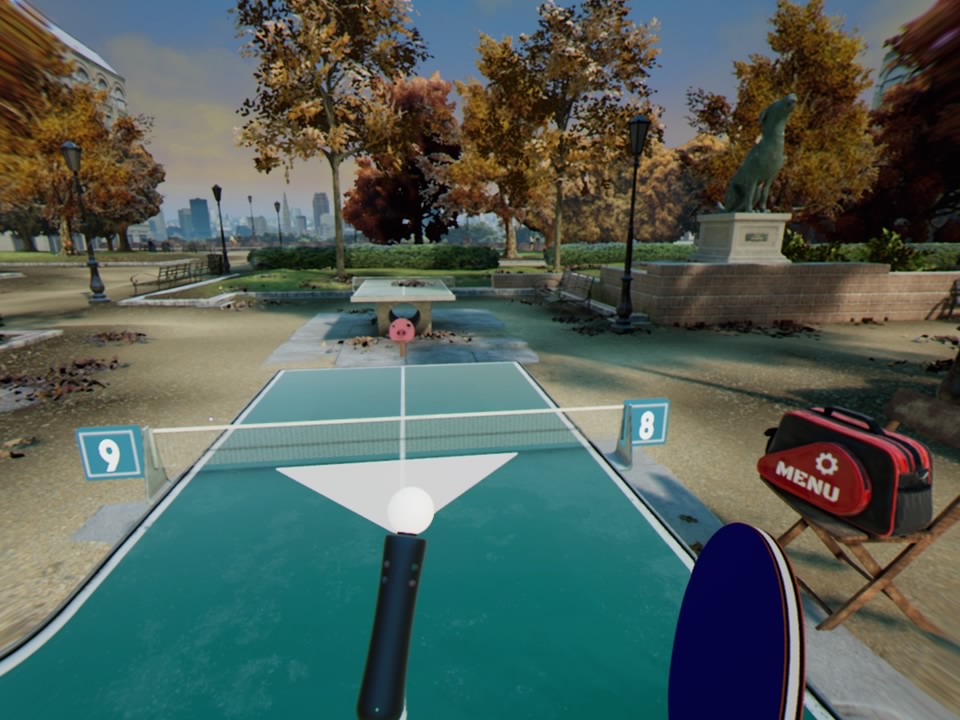 Straight away there’s an improvement in the presentation. Gone are the simple, blocky visuals which had character but got old pretty fast, replaced with a pleasing menu and more realistic graphics when you enter the game. There are eight environments altogether, from a park to an arcade to a Brazilian favela. Five can be chosen at will for single player matches against an AI opponent whilst the other three are more arena based and exclusive to online multiplayer (more on that later). There tend to be people milling about creating some background noise which is a nice touch and gives some character to the environments, though they aren’t reactive at all.

When entering a single player match you can choose the difficulty of your opponent based on a star rating between one and five. Initially even the one star AI was beating me quite handily but I felt the curve was actually quite good as I moved my way up through the difficulties. It wasn’t so much the one star AI beating me early doors, more me losing points as I got used to the controls. 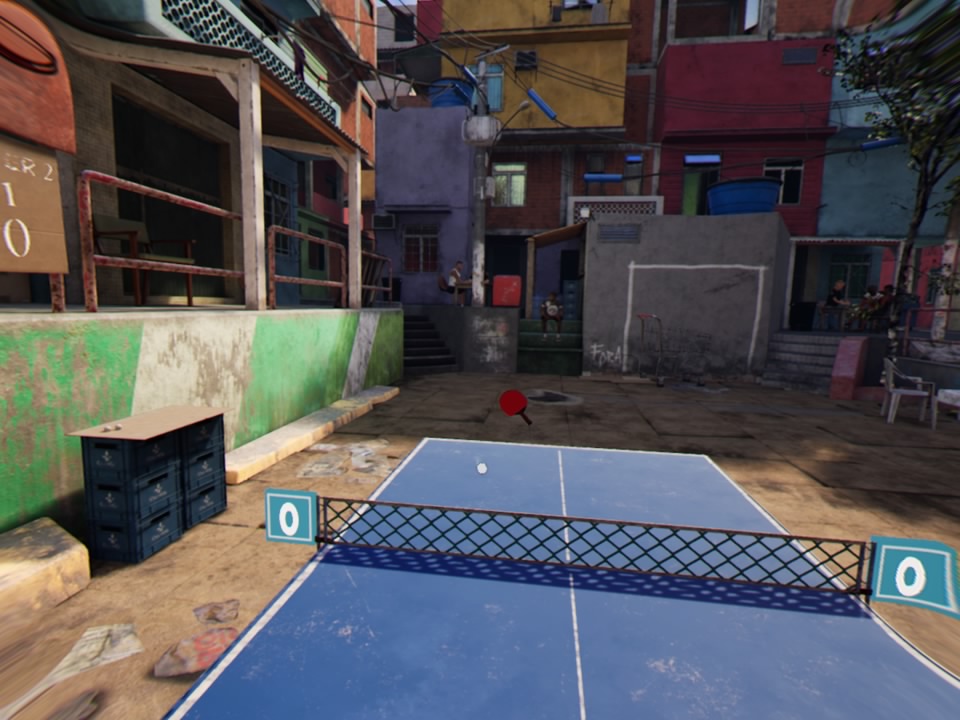 Things are pretty simple, with you able to choose between one Move controller or two if you want to throw the ball into the air more realistically. If you last played the game using two then you won’t be able to start the game next time using only one, annoyingly, you’ll have to connect two and change the setting in the options. Then it’s a matter of using your paddle to hit the ball back and forth using the rules of ping pong (which are handily provided at the main menu for reference). You can use the options to adjust the paddle in your hand for comfort, rotating and tilting it, but beyond that you just need to get a feel for the ball physics where I’ve found a gentle, straight wrist approach to work best. So much innuendo.

I won’t say the ball physics are exacting but once you get the hang of them getting a rally going or finding the edge of the table with a back hand slice is very satisfying. The difference between tapping the ball into the net and blasting it into the distance is minimal which, along with playing in a smaller than ideal environment, definitely limited my play but I could reliably win points which was enough to keep me playing.

There are five mini-games to play single player as well, with four ‘Coming Soon’ according to the menu. These are Wall, Goal, Hit Point, Bowling and Broken. Here the visuals take on a slightly different style as the table becomes computer generated in appearance, and the bounce of the ball sounds like a space invader. I actually found the ball harder to follow in this mode, but the mini-games themselves are sound for a short while, helping you learn how to rally or hit targets by earning points. 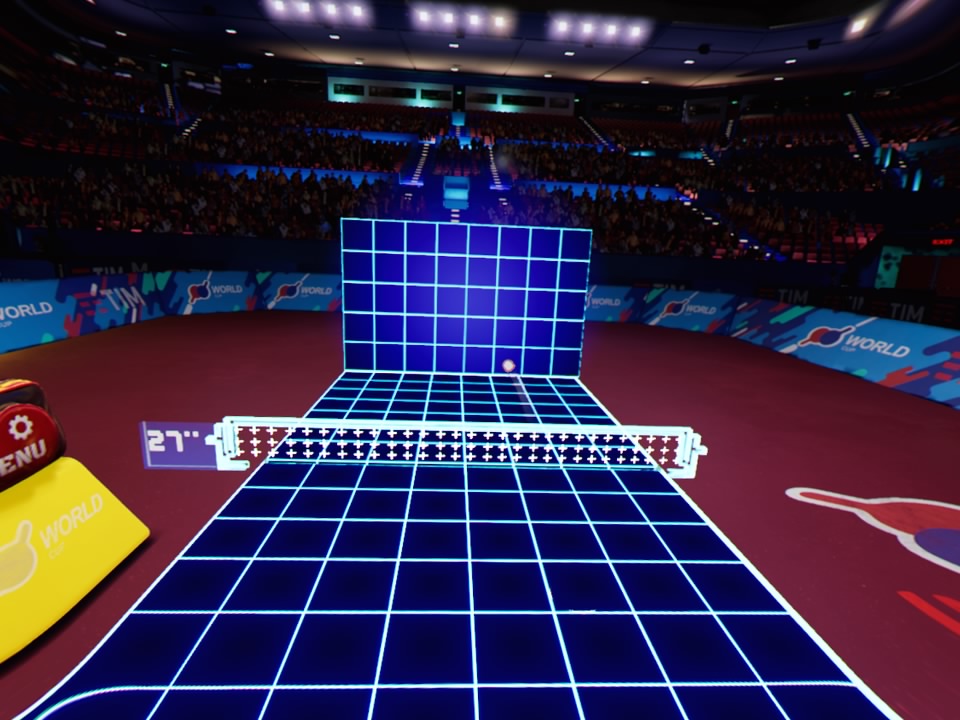 There are two multiplayer modes with a simple matchmaking or a tournament mode. I can’t really comment on these as I’ve yet to find a game. You select the option and it loads you into a new environment and then an hour glass just spins in front of you forever. I would recommend getting a friend to buy the game as well if you want to play with a human, but there doesn’t seem to be a way to invite a friend but I’m sure if you both searched at the same time then you’d find each other. I assume anyway.

Playing a tournament or two in single player, or a career mode, would have been nice but as it is without being able to play the multiplayer all you get are five environments to play against AI of five difficulty levels and five mini-games. Defeating the AI does unlock new paddle skins (there are also ball skins but I have yet to see how those unlock, possibly online) but apart from offering more variety in the environments and having a smoother difficulty curve VR Ping Pong Pro isn’t the massive leap over the original that you’d hope for, especially at nearly twice the price. 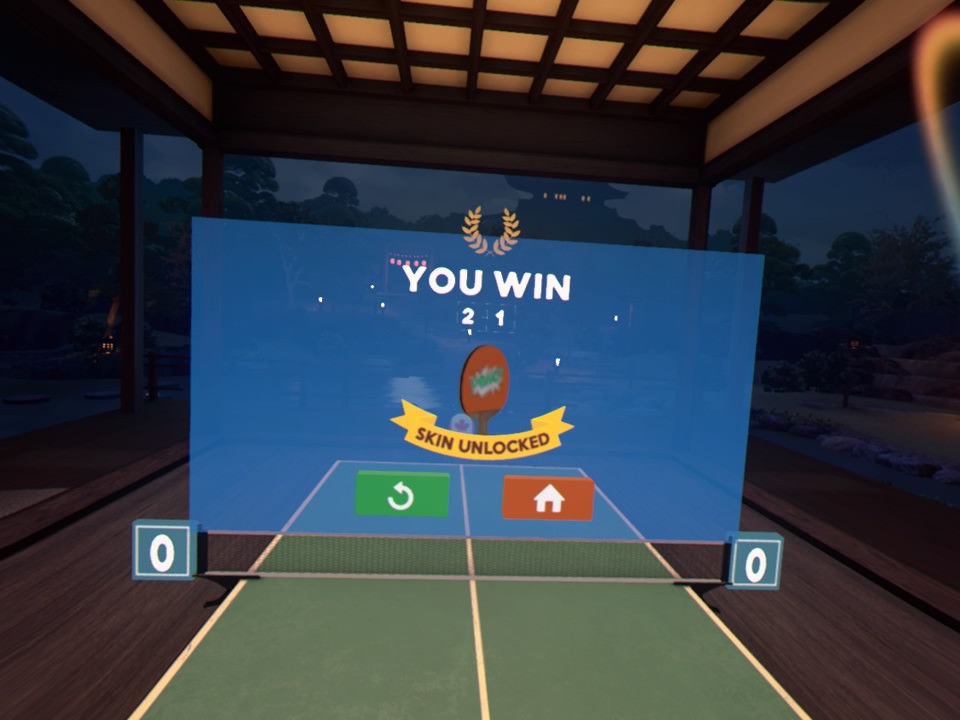 There is an enjoyable experience here. It’s not all the game it could be, but simply the act of knocking a ball back and forth is enjoyable for a time. The limits of the hardware, the environment you’re playing in and the physics do stop it from being anything more than a light knock about but if that’s what you’re looking for and you don’t mind that the online is dead on arrival or that there isn’t any progression beyond the challenges you set for yourself then, like the original, there is a simple pleasure to VR Ping Pong Pro.

VR Ping Pong Pro
6 Overall
Pros
+ Huge visual improvement
+ The act of hitting the ball back and forth is fun
+ The AI difficulty curve feels right
Cons
- Still lacks content
- Multiplayer is dead on arrival
- Restricted by the hardware and playing environment
Summary
VR Ping Pong Pro isn't the leap from the first game that you'd hope for. The enviornments are very nice and the inclusion of online multiplayer is a good move, though it's dead already. Much like the first game however, the simple act of playing an approximation of table tennis in VR is enjoyable. There's not enough content to keep you hooked but you'll return to it every now and again for a light knock about.