The VideoKid is an indie arcade title from London-based devs Pixeltrip and gamers of a certain age will instantly recognise its main inspiration which is the classic Atari coin-op Paperboy.

As with that game, The Videokid has you playing as a delivery boy, skating along an isometric-viewed road and delivering your wares to houses on the left side of the street while various cars, people and obstacles get in your way. As such, this initially feels like a very direct port of the original game. 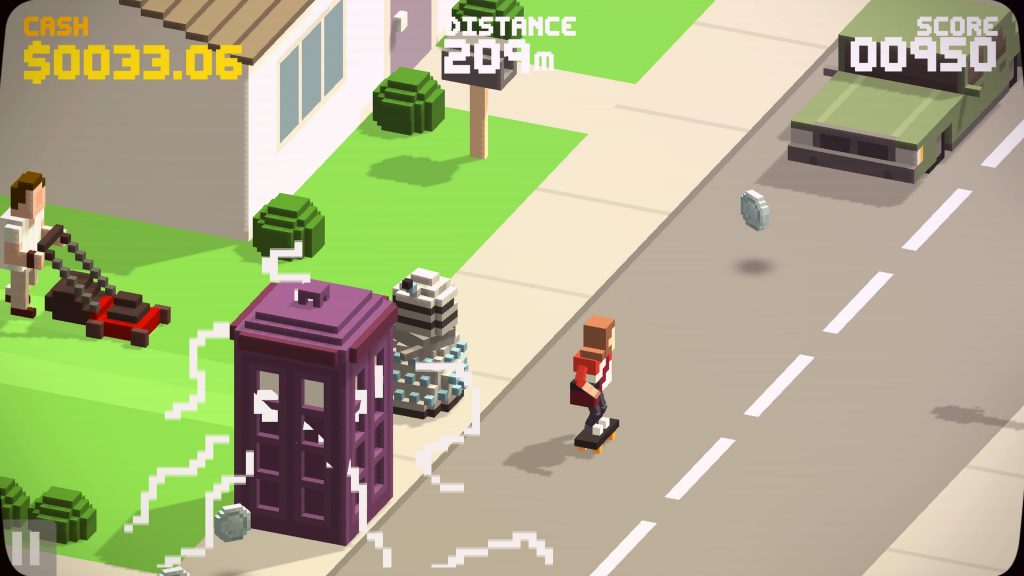 This time, instead of delivering newspapers, you are flinging rental VHS tapes at the mailboxes of the houses on the street but essentially the gameplay is the same. If you’re not familiar with Paperboy the idea is that you are always skating forwards and can go in either lane of the road (you might want to avoid the right hand lane as cars will happily run you over from behind) or on the kerb.

If you can survive the entire journey along the street, you’ll meet Jessica, your girlfriend, and will then earn points for the houses you delivered to. Not that points particularly matter as The VideoKid seems to place a bit more emphasis on in-game money which you earn for each delivery and for picking up coins along your route. This money can then be used to buy character skins and new skateboarding tricks. 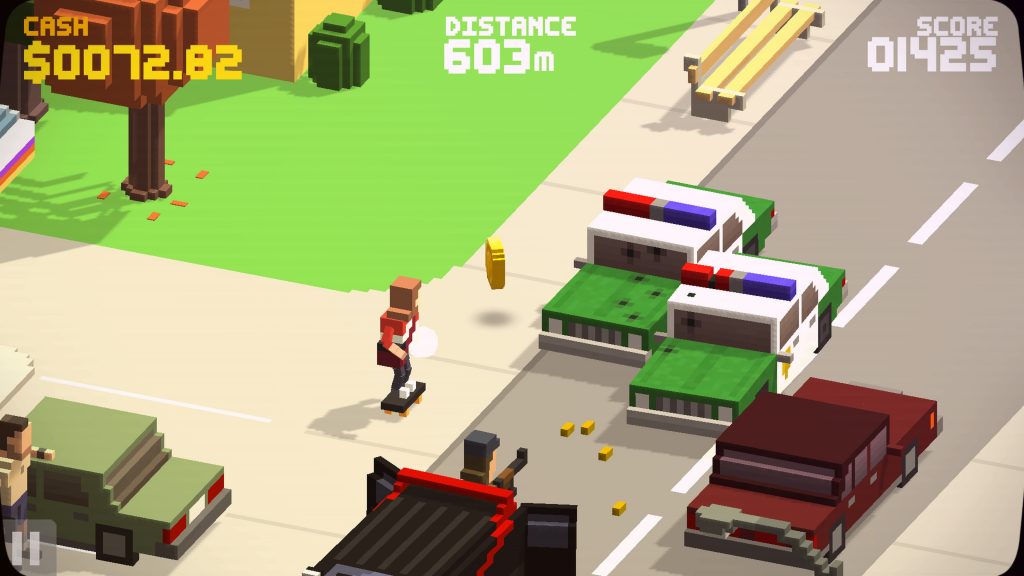 Aside from your basic steering controls and pressing X to fire off a VHS tape to your left, you can also jump. This is a little different from Paperboy as it allows you to leap over obstacles or even onto them. If you time it right you can land on a car and then jump off by pressing either left or right. You can then land on another skate-able obstacle which will keep your combo going and earn you some extra points.

The main difference from Paperboy is that the action here is randomly-generated. You’ll soon spot the patterns as there isn’t much variation but where Paperboy had a series of ever more fiendish stages, this just has the one and the random nature means it isn’t quite as well designed. I spent a while getting good at the Paperboy port on Xbox Live Arcade and had to work hard to complete an in-game week but this is a little less interesting than that as really you’ve just got one level. 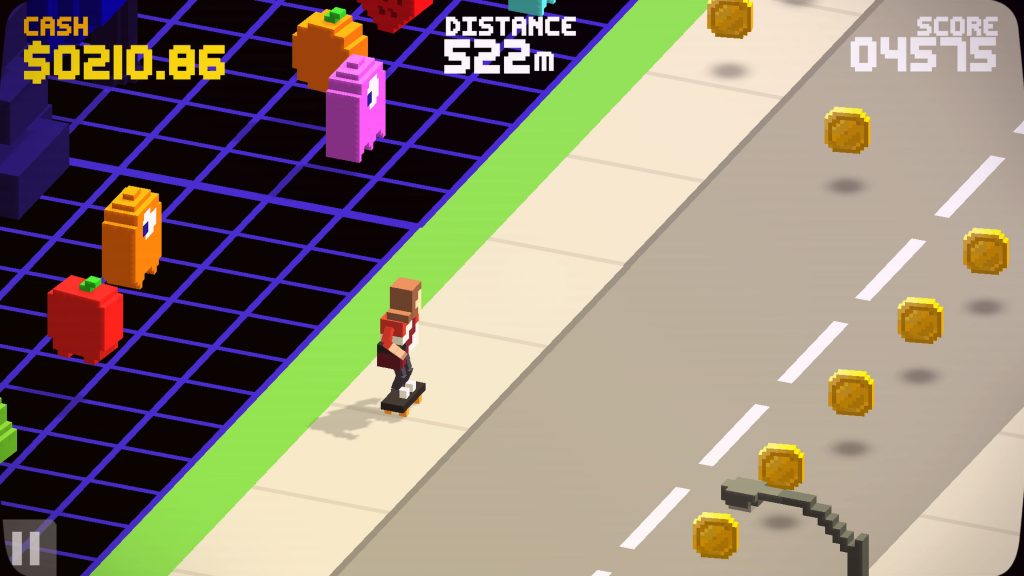 The VideoKid does try to mix things up with a couple of underground sections and some interesting obstacles along the way though and it is undeniably addictive, having cost us quite a few hours already. Most interesting though is the game’s overall style.

The game has the same voxel-driven design as games like Crossy Road and Pacman 256 with the same clean, colourful look and the same perspective. Even though this is essentially 3D pixel art, everything moves nicely and it all looks great. That would already be great but the game also throws in a ton of nods to the ’80s. 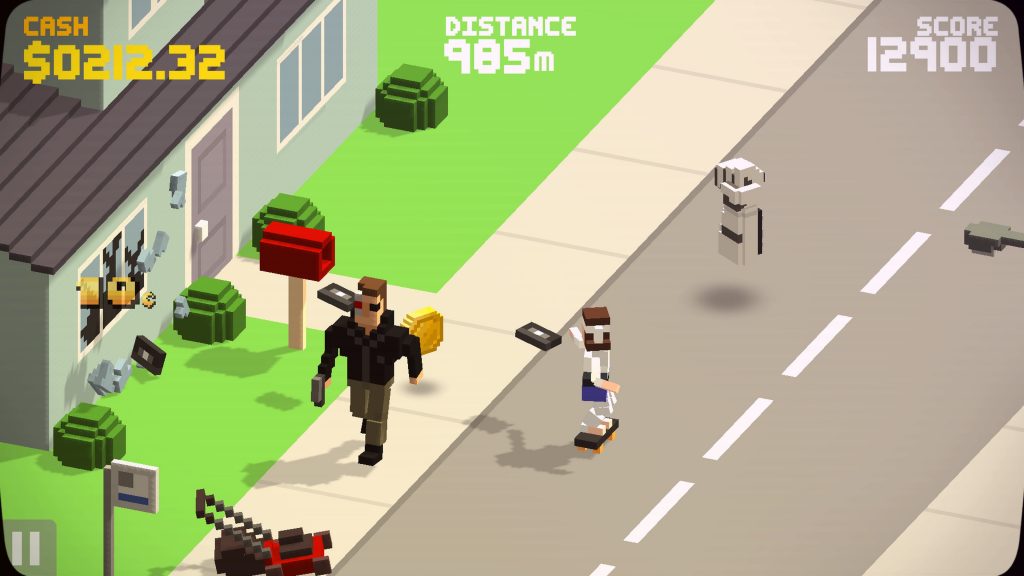 These might be the best part of the game as you’ll be spotting all sorts of icons from ’80s films and TV. From Riggs and Murtagh from Lethal Weapon and T-800 Arnie to He-Man (and Battlecat) and Lion-o, there’s so many great references to spot. Sure, you’ll have seen all of them within the first twenty to thirty minutes of playing, depending on how many times you crash, but they are a ton of fun to spot and add a lot of character to the game.

However, when you get past that there isn’t a whole lot else to the game. While the sections are randomised, you’ll still get most of the same variations each time, just in a different order. There will always be two sewer sections, two Pac-Man sections and so on. It’s super addictive but once you beat the game there isn’t much reason to go back, apart from one trophy which requires you to beat the game three times. 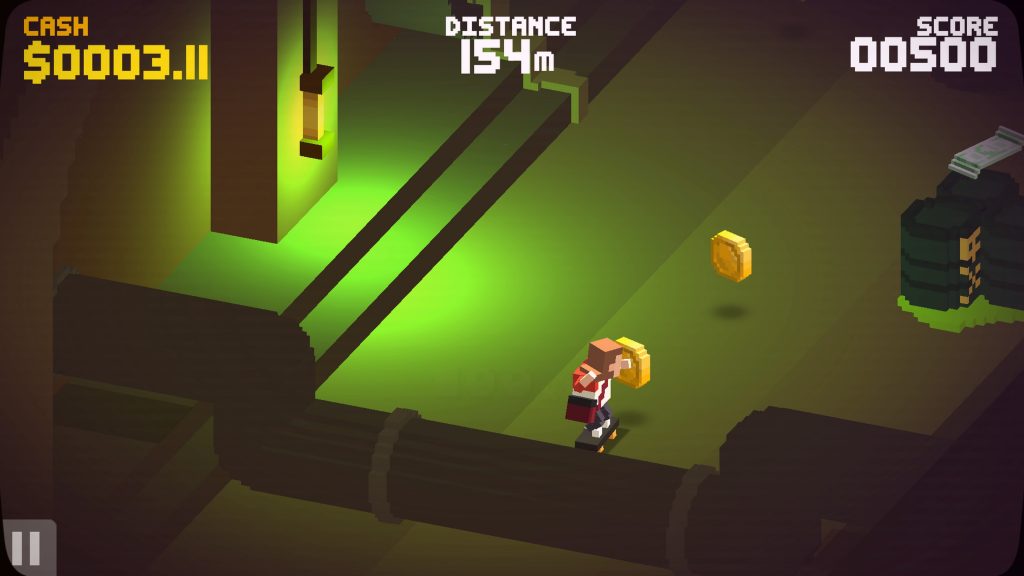 There are also some niggles that got more and more irritating for me as I went along. The first is the controls. The game uses

to jump. This is horrible. I want

to fire. At least 95% of my crashes came from pressing the wrong thing and the game doesn’t have any option to redefine your controls. In fact it doesn’t have ANY options.

The game does let you use up on the d-pad to jump and I went with that, despite everyone knowing that ‘up to jump’ is one of worst things in gaming. Hopefully that’ll get addressed with a patch but it is baffling that a game can exist on the PS4 with no options. 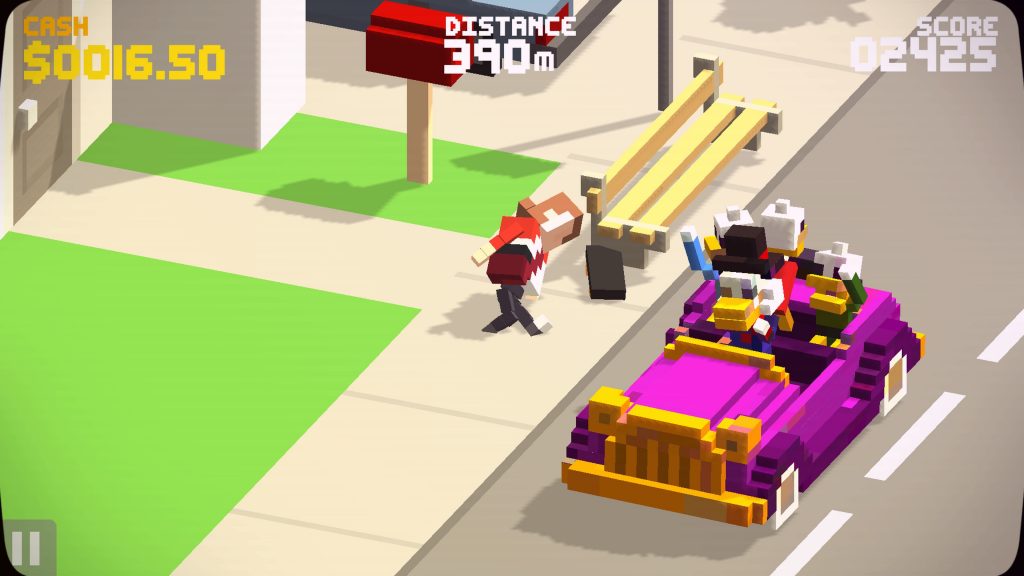 Also, the game likes to remind you OFTEN that you can purchase more players. This is all in-game currency, there’s no IAP shilling going on so why am I being reminded so often. It’s particularly annoying because where you use

to get through the restart process, every now and again it will take you to the in-game store where normally

will do that.  It’s an unnecessary switch that feels deliberate.

To add insult to injury they also advertise skins and moves THAT YOU’VE ALREADY BOUGHT. Again, I wish there was an option to tell it to shut the fuck up, but there are no options.  It’s a shame though as the skins are pretty interesting and feature unlicensed knock-offs of characters like Daniel Larusso, Teen Wolf and She-Ra. 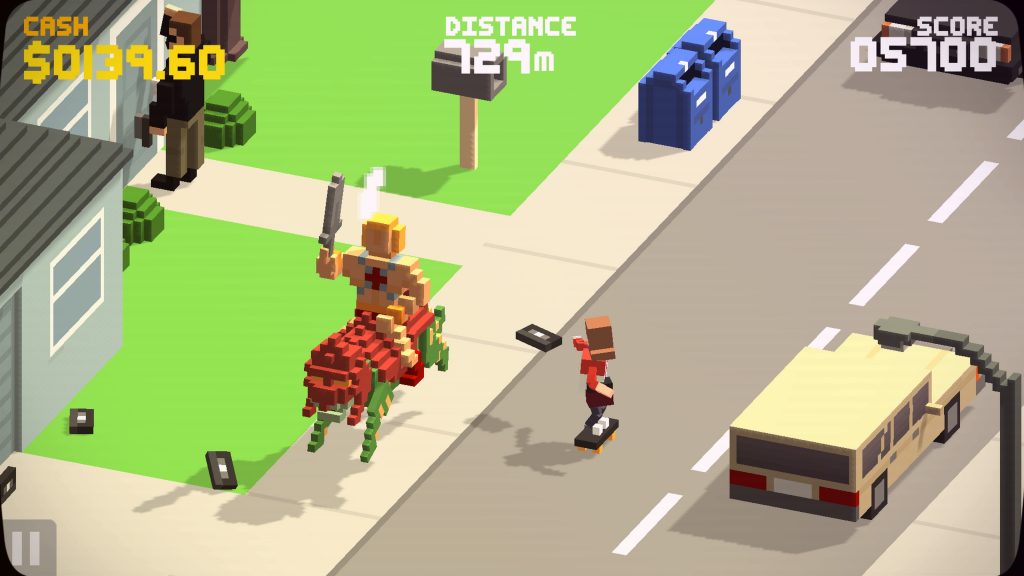 If anything, those flaws make this feel like a very lazy port of a mobile game. It’s not a mobile game but the unoptimised controls, the faux IAPs and the lack of options definitely give it that flavour and that’s a shame because on paper I should be an absolute mark for The VideoKid, given that I’m a fan of Paperboy, random ’80s references and the modern games that share this visual style.

That’s not to say that The VideoKid isn’t fun and alarmingly addictive but it is also a couple of good design decisions away from being excellent and as such feels like a wasted opportunity.

Summary
It's incredibly shallow and relies on one (admittedly enjoyable) gimmick but The VideoKid is a fun, addictive pick up and play arcade game. However, a few poor design decisions spoil the fun more than they should.